Popcap Games recently released a version of their viral favorite Bejeweled to Facebook. This time the company took a new direction with the title and put a 60 second limit on the game. Think of it like a Blitzkrieg of Berlin version of the more normally laid back title. And what Blitzkrieg it is. If you know Bejeweled then you know how addictive the games can be. Take that addictiveness and multiply; when you start playing blitz we’ve left the casual drug scene and dipped fullon into the world of crack and crank. We aren’t in Kansas anymore.

After searching all of the content throughout the entire World Wide Web and finding nothing I thought I would start pulling together tips and tricks for this intense mind-job of a game.

Given you are only given 60 seconds it goes without saying that you need to giddy-up. But how? First things first. Make sure you just rebooted your computer. Nothing is more frustrating than to start playing and have your CPU pause on you for 3 or 4 seconds… because the action may pause, but the clock definitely doesn’t. Second tip is – don’t use your laptop’s touchpad. Don’t even think about it. Or even a trackball. Use a mouse. And the next tip here is continued out in Tip 2 below.

In order to pick your speed up exponentially start figuring out the patterns.  See the threes that are available to you and all the permutations that they come in.  See the fours and weight those higher than the threes.  And above all find those fives!!

More importantly than figuring out the patterns – figure out the patterns that your brain just can’t figure out. Without knowing where your weaknesses are you’ll never improve.  For me I have problems with diagonals. They just send my brain into a conniption. Throw a five gem diagonal in front of my face and I shut down.   I am just CERTAIN there must be a kill in there somewhere. But no.  So, play a few times watching what you are doing and memorize solutions to the common problems. Also, watch someone else play. And notice the patterns they see that you aren’t seeing.

To be 100% honest, I am not sure how the multipliers are dropped. I have theories on how they get dropped… but they are unsubstantiated in the extreme. It either has to do with the number of combinations that you drop in one move – or something to do with the speed bonuses.  If you have more information on this I would love to hear from you!!  Presently I have a couple of questions out to others who are big into the game.  But nothing substantial yet.

But one thing I do know is that you need them badly.  Desperately.  To get out of the 30k to 40k range you HAVE to have multipliers. You need at least 3x to start aiming for 60k-70k range.   I’ve confirmed one report that they’ve seen up to 6x hit the board… so get all the love you can.

Tip 4:  Avoid the Deer in the Headlights

Ok, so a multiplier drops on to your board.  But the gem is blue and there aren’t any blues anywhere even close.  Let it go.  Walk away and don’t think about it again.  The board will toss love your direction if you attack it where the combos are.  But if you force a solution you may get your multiplier but all your time will drain away… and you’ll be stuck with your pyrrhic victory and 10,000 points.  This is true with any shiny object.  Well except for a five-combo that is… but you know what I mean.  Don’t let the shiny object distract you.  If it isn’t there don’t force it. 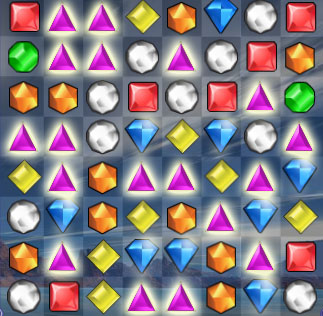 I have just begun using this technique and it has been a huge bonus  so far.  But I haven’t worked out all the kinks yet.  Regardless, above we have an example of an opening board configuration I just snagged randomly from Bejeweled Blitz out on Facebook.  As this theory espouses, as soon as the game begins you should notice the most densely populated gem type.  And here’s the trick, avoid playing them.

Eh?  What’d he say?  He can’t have just said what I thunk he just said.  Because I see like four or five easy plays in the purples all by themselves. No, don’t playthem.  Play everything else.  And in so doing the hope is that the fives will start dropping out of the sky like nobodies bidness.  And once the first five plays and the color disappears, select the next color to avoid.

More advanced tips next time…  Until next time!