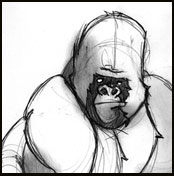 Before I get to that though I’m aware that most of you stumbling on to this post have no idea what Gorilla Labs could be.  Basically, the long and short of it is, that I believe that the Church is losing out on millions and millions of dollars – potentially billions – every single year in licensing costs and SAAS fees.  Thinking about this problem a little differently I realized that the Church has within its walls some of the most amazingly talented developers, designers and leaders in the world.  Why aren’t these world class developers using their talents to solve problems key strategic problems that the Church is curently paying large dollars for monthly and annually?  Or better yet – why aren’t these developers creating unique solutions that only the Church really fully understand?  And better yet, why aren’t these developers and leaders giving their time to the Church for free to help solve a problem world wide and not pillaging the bride of Christ with high usage fees and licensing costs?  Right.

This idea is not your normal business plan – and is completely not of this world (or NOTW, if you will).  And to take this to the next step, this idea needs an implentation plan that isn’t of this world also.  A plan that is normally doomed to failure in the world’s eyes.  A plan that is so counter cultural the only way it could succeed is if God is personally working through it and breathing life into it.  I think that is what faith is all about?  Anyway, without further delay I’ve listed the three key steps to launching this game changing initiative herewith:

So this seems to be the trickiest bit.  Although at the same time potentially the easiet.  Gorilla Labs needs a group of investors to plunk down a relatively small amount of money to get GL off the ground initially.  I mention an Angel Investor but this may be a misnomer.  What GL really needs is an investor that sees the potential in helping the Church at large.  And Angel Investment firms (at least the investment firms I’m aware of) are a bit skeptical of investments that don’t bring in returns.  hehe.  I think that cuts against the grain of their entire purpose.

And while GL’s investors may very well get every penny of their investment back – that wouldn’t be why someone should want to invest in GL.  They’ll invest because they see this as a very simple way to help an enormous swath of the world’s Churches (pentecostal, liberal, conservative, what have you) and solve key problems technologically with relative ease.  Gorilla’s investors will be a key sounding board for the direction of development GL will pursue and they will also help advise on the prioritization of the solutions the world needs resolved.  It’s funny to speak in such global reaching terms.  But this company has the potential for honestly impacting the world over by providing cutting edge solutions to the world’s poorest Churches all the way up to the world’s largest mega-churches.

Without a doubt the most important need Gorilla Labs has will be to find a core group of individuals that believes heart and soul in the mission of Gorilla Labs.  Developers.  Accountants.  Executives.  Boardmembers.  GL will only thrive if the people God calls respond to His call.  Obviously the group’s fulltime status will depend on finding to cover salaries and benefits for such a team as this.  Initially though, at least until the first product reaches “market” I’d bet that the team would have to be primarily of volunteer status.  But miracles can happen and it may very well be that God has different plans in store.

Regardless of the financial model though and regardless of the incentives that bring individuals to Gorilla – the team will have to be world class.  A team to rival 37signals.  Not Microsoft.  Not Google.  37signals.  And by rivaling 37signals, not Microsoft or Google, we will be able to out maneuver the field entirely.  And yet, beating the world at their game is not Gorilla Lab’s goal.  Providing extremely valuable software solutions to the unique problems facing the Church is.  But if Gorilla isn’t doing it in a world class way, then we will pack up our toys and go home.  It won’t be worth it otherwise.  And that is why GL will require the world’s greatest and most empassioned software developers in the world.

3.  A Bevy of Unique Problems

This is where you, the Church – the corporate whole, needs to speak up.  What are the Church’s largest problems?  Notice that I didn’t ask what the Church’s largest software or tech problems are.  I want to know what the Church’s largest problems are.  And if we can bring software to bear on these unique problems, that is where Gorilla Labs steps in.  But without a long list of uniquely interesting problems GL will be without purpose.  Sure, I could throw a couple against the wall to see if they stick… but that isn’t the purpose of GL.  The purpose is to hear the passionate plee of the Church today.  To listen to the Bride of Christ’s heart and to responsd.  And without a two-way dialogue this between GL and churches of all sizes this will definitely all be for not.

So what needs does the Church have today?  Where can a model as unique as Gorilla’s revolutionize God’s calling in your life?  How can 1’s and 0’s permeate your daily job and allow you to do what God has originally called you to do?  Remember that?  Touching lives.  Impacting families.  Revolutionizing an entire social fabric?  That’s what God called you to – isn’t it?  Then why are you spending all your time figuring out your stupid budget on an old and busted calculator?  Why are you spending inordinate amount of your time fighting with your email program that you can’t figure out how format just so?  Let Gorilla empower you to be the hands and feet of Christ He originally called you to.