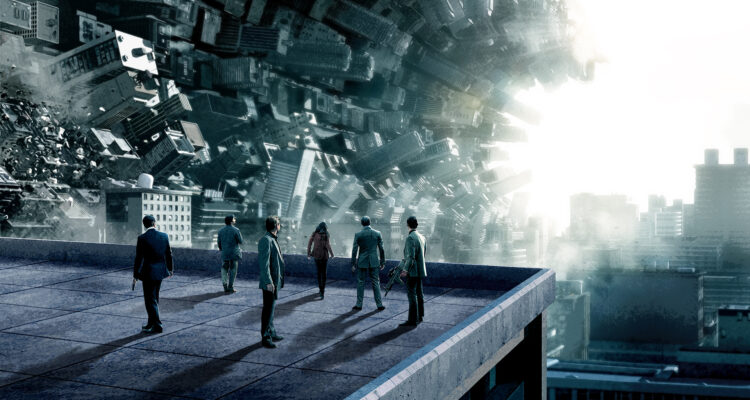 I recently was fortunate enough to come across some in depth & quite detailed quotes from Nolan’s most recent movie inception.  I’ve dropped a couple of the more interesting ones here for your perusal.  If you have ones that might be helpful to your understanding of the movie just hollar and I’ll see if I can get that one as well.  So let’s dig into a list of inception quotes for your review…

Arthur – “So wants we’ve made the plant, how do we get out?  I’m hoping you have something more elegant in mind than shooting me in the head.”
Cobb – “A kick.”
Ariadne – “What’s a kick?”
Eames – “This, Ariadne, would be a kick…” tips Arthur’s chair
Cobb – “It’s that feeling of falling you get that jolts you awake.  Snaps you out of the dream.”
Arthur – “Are we going to feel a kick with this kind of sedation?”
Yusuf – “That’s the clever part, I customized the sedative to leave inner ear function unimpaired.  That way, however deep the sleep, the sleeper still feels falling.  Or tipping.”
Cobb – “The trick is to synchronize a kick that can penetrate all three levels.”
Arthur – “We could use the musical countdown to synchronize the kicks.”

Cobb:  “How’s he doing?”
Ariadne: “He’s in a lot of pain.”
Cobb:  “When we get down to the lower levels the pain will be less intense.”
Ariadne:  “And if he dies?”
Cobb:  “Worst case scenerio, when he wakes up his mind is completely gone.”
Saito:  “I Will still honor the arrangement.”
Cobb:  “I appreciate that but when you wake up you won’t even remember we had an arrangement.  Limbo’s going to become your reality.  You are going to be lost done there so long you are going to become an old man…”
Saito:  “Filled with regret”
Cobb:  “Waiting to die alone”
Saito:  “No, I will come back and we will be together again.”

Cobb:  “Let me ask you a question – why the hell were we ambushed, those weren’t normal projections they’ve been trained for god’s sake.”
Arthur:  “Yer right.”
Ariadne:  “How could they be trained?
Arthur:  “Fischer’s had an extractor teach his subconcious to defend itself so his subconcious is militarized.  It should have shown in the research I’m sorry.”
Cobb:  “So why the hell didn’t it?”
Arthur:  “Calm down.”
Cobb:  “Don’t tell me to CALM DOWN.  This was your job God Damnit.  This was your responsibility.  You were meant to check Fischer’s background thoroughly. We are not prepared for this type of engagement”
Arthur: “We’ve dealt with this kind of security before we’ll be a little bit more careful and we’re going to be fine.”
Cobb:  “This was not a part of the plan, he’s dying for god’s sake.”
Eames:  “I’m going to put him out of his misery.”
Cobb:  “Don’t do that. Don’t do that.”
Eames:  “He’s in agony I’m waking him up.”
Cobb:  “It won’t wake him up.”
Eames: “What do you mean it won’t wake him up?”
Cobb:  “It won’t wake him up.
Eames: “When we die in a dream we wake up.”
Yosuf: “Not from this.  We’re too heavily sedated to wake up that way.”
Eames: “Right, so what happens when we die?”
Cobb: “We drop into limbo.”
Arthur: “Are you serious?”
Ariadne: “Limbo?”
Arthur: “Unconstructed dream space.”
Ariadne: “Well what the hell is down there?
Arthur: “Just raw infinite subconcious, nothing is down there.  Except for whatever might have been left behind by anyone sharing the dream who’s been trapped down there before.  Which in our case, is you.”  (looking at Cobb).
Ariadne:  “Well, how long could we be stuck there?”
Yosuf: “Don’t even think about trying to escape until the sedation…”
Eames: “How LONG?!”
Yosuf: “Years, decades, I don’t know, it could be inifinte, I don’t know, ask him!  He’s the one that’s been there.”
Arthur: “Just get him upstairs.”
Eames: “Great.  Thank you.  So, now we’re trapped in Fischer’s mind battling his own private army and if we get killed we’ll be lost in limbo until our brains turn to scrambled egg, eh?

Ariadne: “When were you in limbo?  You might have the rest of the team convinced to carry on with this job, but they don’t know the truth.”
Cobb:  “Truth?  What truth?
Ariadne: “That at any minute you might bring a freight train through the wall.  The truth that Mal is bursting through your subconcious.  And the truth that, as we go deeper into Fischer we are also going deeper into you.  And I’m not sure we are going to like what we find.”
Cobb:  “We were working together, we were exploring the concept of a dream within a dream.  I kept pushing things.  I wanted to go deeper and deeper, I wanted to go… further.  I just didn’t understand the concept that hours could turn into years down there.  That we could get trapped so deep that when we wound up on the shore of our own subconcious we lost sight of what was real. We created, we built the world for ourselves.  We did that for years.  We built our own world.”
Mal:  “How long were you stuck down there?”
Cobb:  “Something like 50 years.”
Ariadne:  “Geeze, how could you stand it?
Cobb:  “Wasn’t so bad at first…”

Ariadne:  “How are we going to bring Fischer back?”
Cobb:   “We are going to have to come up with some kind of a kick.”
Ariadne:  “What?”
Cobb:  “I’m going to improvise.  Listen there’s something you should know about me.  About inception.  An idea is like a virus.  Resiliant.  Highly contagious.  The smallest seed of an idea can grow.  It can grow to define or destroy you.”
Mal:  “The smallest idea such as, your world is not real.  Simple little thought that changes everything.  So certain of your world, of what’s real – do you think he is?  Or do you think he’s as lost as I was?”
Cobb:  “I know what’s real Mal.”
Mal:  “No creeping doubts?  Not feeling persecuted Dom?  Chased around the globe by anonymous corporations and police forces.  The way the projections persecute the dreamer.  Admit it.  You don’t believe in one reality any more.  So choose.  Choose to be here.  Choose me.”
Cobb:  “You know what I have to do, I have to get back to my children because you left them.  Because you left us.”
Mal:  “You’re wrong.”
Cobb:  “I’m not wrong.”
Mal:  “You’re confused.  Our children are here and you’d like to see their faces again wouldn’t you?”
Cobb:  “Yes, but I’m going to see them up above Mal.”
Mal:  “Up above?  Listen to yourself.  These are our children, watch – James, Phillipa…”
Cobb:  “Don’t do this Mal, please, those aren’t my children.”
Mal:  “You keep telling yourself that but you don’t believe it.”
Cobb:  “No, I know it.”
Mal:  “And what if you’re wrong? What if I’m what’s real?  You keep telling yourself what you know but what do you believe?  What do you feel?”
Cobb:  “Guilt. I feel guilt Mal, and no matter what I do, no matter how hopeless I am, no matter how confused, that guilt is always there reminding me the truth.”
Mal:  “What truth?”
Cobb:  “That the idea that caused you to question your reality came from me.”
Mal:  “You planted the idea in my mind?”
Ariadne:  “What is she talking about?”
Cobb: “The reason I knew inception was possible was because I did it to her first.  I did it to my own wife.”
Ariadne: “Why?”
Cobb:  “We were lost in here and I knew we needed to escape but she wouldn’t accept it. She had locked something away, something deep inside, a truth she had once known but chose to forget. And she couldn’t break free.  So I decided to search for it. I went deep into the recess of her mind and found that secret place.  And I broke in and I planted an idea. A simple little idea that would change everything. That her world wasn’t real.”
Mal:  “That death was the only escape.”
Cobb:  “You’re waiting for a train.  A train that will take you far away.  You know where you hope that this train will take you.  But you can’t know for sure.  Yet it doesn’t matter. Now tell me why!”
Mal:  “Because we’ll be together!”
Cobb:  “Yet I never knew that that idea would grow in her mind like cancer, that even after she woke, that even after you came back from reality that you continued to believe that your world wasn’t real.  That death was the only escape.”
Mal:  “You infected my mind.”
Cobb:  “I was trying to save you.”
Mal: “You betrayed me, but you can make amends.  You can still keep your promise.  We can still be together right here.  In the world we built together.”
Cobb:  “If I stay here will you let him go?”