Alright, lets go looking for the 5 best mind bending movies.  With the release Christopher Nolan’s Inception I have been asked time and time again about other similar movies that mess with your mind. And every time I’m asked I find myself wondering what it is about Nolan movies that make them so fantastic?

Is it the surprising, twist ending?

Maybe its the noir darkness that people enjoy?

Or could it be the LSD mind trip quality?

And when I listed out all the movies I considered to be somewhat relevant I saw a list that was upwards of 30 movies. Each having one of the qualities above. You have other Nolan movies like The Prestige, Memento, Inception which just scream mind bender in every way. But some were the best con-artist movies ever made – you don’t get better at twist endings than that. A few were stylish noir flicks that were epically dark and palpable in their feel. And then you had the mind trip, LSD rides that totally messed with your sanity while visiting their worlds. Each of these movies were classics. But they didn’t capture the essence that is the Nolan vibe. The brilliant idea. The epic ending. The crazy confusion of not understanding what is going on. The contained idea that brings you new worlds of possibilities.

So with that I went to hacking away some of the best movies in film history. Movies like Blade Runner (Director’s Cut) – which had 2 of the three but not all three criteria. Noir world. Surprising theory. But it just wasn’t at its core epicly mind bending like a Nolan movie. Sure, we have the discussion around whether Harrison’s character was an android or not. But that wasn’t at the center of the movie. What else? You have con movies like 9 Queens – an Argentinean movie that is at the top of its game in throwing the viewer for a loop as to which way is up and which way is down.

And in the comments below we have just a huge pile of added movies for use to consider. Movies like The Usual Suspects, Donnie Darko, Inception, 12 Monkeys, Shutter Island, etc. etc. Which are amazingly good candidates. Good enough I took stock of my picks and had to reaffirm them all.

So many good possibilities to list here. But instead of going for a long list of commonly known movies I tried to select movies that fit all three criteria but also were less widely known. So that if you are coming to this list looking for other Nolan-like mind bending movies there will probably be one on here that you don’t know. So with that understood – let us begin our countdown, starting with number five in our search for the 5 best mind bending movies. 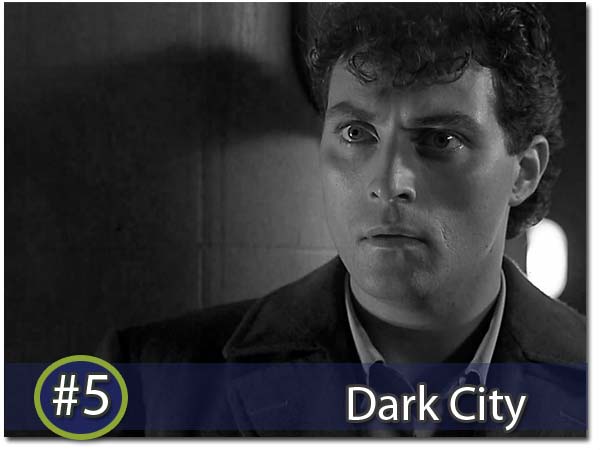 Dark City is a noir Science Fiction movie that will mess with your understanding of reality in an enormously cosmic sense. Are we humans innately good? Are we crafted by our environment or do we redefine the environment to craft it to who we are?

The storyline is the basic noir plot line. A man wakes up near a dead woman with a knife in his hand. And the next thing we know is that we are on the run. Our hero has no memory of the events but can’t believe he would do something as horrible as what happened. So he begins to try and solve the murder on his own. Soon he realizes that not everything is as it seems when everyone in the city simultaneously falls asleep at the stroke of midnight. I’ll stop there – and let you do your discovery for yourself.

Dark City has an ingenious concept at its heart. And a great reveal. It also has a wonderful texture and dark environs. It takes the noir detective story and turns it on its head with a fantastic sci-fi twist. It definitely deserves its place in this elite list of Nolan-esque mind bending movies. 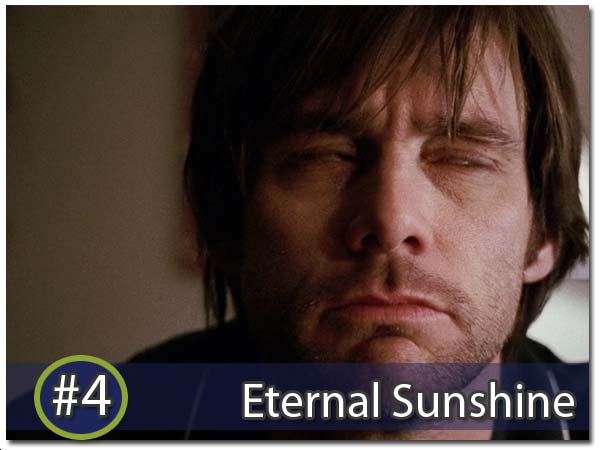 You either absolutely love Eternal Sunshine of the Spotless Mind or hate it with a passion. I personally think it is the perfect romance movie. Probably should tell my shrink – probably would explain a ton to him.

The concept here is brilliant. A machine the redacts painful memory – what could go wrong here? And the journey through partially deleted memories is the stuff of legends. What I never understood here is – how does finding your love in your brain equate to finding her in real life? But none the less, Eternal Sunshine of the Spotless Mind is epic. And could have easily bounced from #4 to #1 in my (spotless) mind. It’s that good. If you haven’t seen this gem, cease reading and stream it immediately. (I’m thinking this comment goes for absolutely every movie in this list… but I digress). 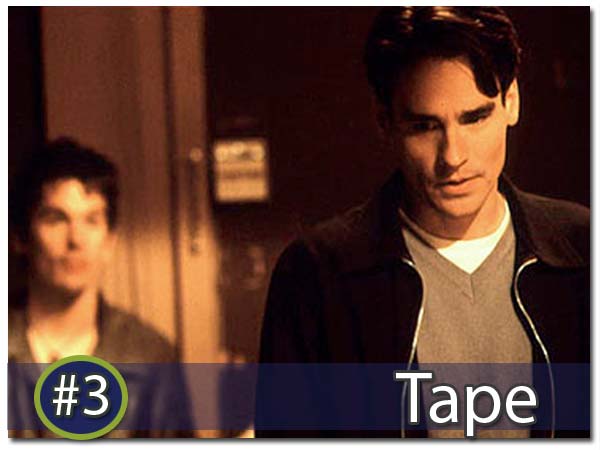 Even if you are a huge movie buff there is still a very good chance that you have never even HEARD of this movie. So few of you had even heard of this movie I thought I would include a link for you to pick this movie up at a great price.

There are only THREE cast members in the whole movie (Ethan Hawke, Uma Thurman and Robert Sean Leonard).  And I’m including extras here. And there is only one room – a beat down hotel room at that – in this movie. With a cast list as stark as this and a location even starker you better have a great idea to carry this thing off. And carry it off they do.

Tape is a downward spiral of a movie where what appears is not exactly what it seems. And the entropic unraveling that carries the plot forward is absolutely fantastic. But I love a good dialogue movie (like Ethan’s Before Sunrise and Before Sunset, anyone?) and that is exactly what this movie is. Absolutely stunning dialogue. This is a character driven masterpiece. But of all the movies in the list this one may be the one closest to being disqualified for not exactly being mind bending in the LSD sense of the term. But regardless, I think with its relative unknown nature – it is worth adding to the list. 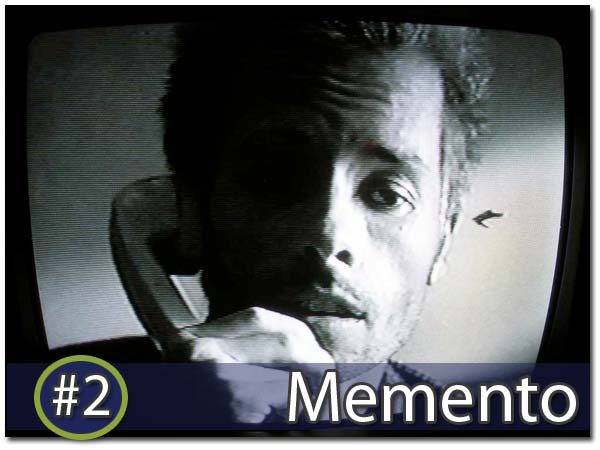 You know that I had to add at least one Christopher Nolan movie to this list.  I definitely recommend the Blu-ray version with all the extras as you are able to even watch the film in “backwards”/”forwards” formats.

Nolan’s opus Memento is absolutely the best mind bender of them all (which we deconstruct over here: https://taylorholmes.com/2010/07/28/memento-explained/ ). Argue all you want, I won’t bend on this one. Prestige seems to be too straight forward. Inception is good – but way too much James Bond. Memento is a brain rush of chaos and jumbled data. It’s like shoving your face into a fire hydrant, backwards. Eh? No, more like a tree shredder set on turbo, turned on backwards. Shredded trees go in, whole trees come out.

I’m not making any sense. PERFECT!

Seriously though, Memento is an epic movie that defies logic. When I first watched it – my mouth was on the floor of the theater for the duration. I kid you not. I couldn’t stop thinking about it. Was I just lied to the entire movie? Did what I just saw happen, really happen? It was brilliant in every sense of the word. 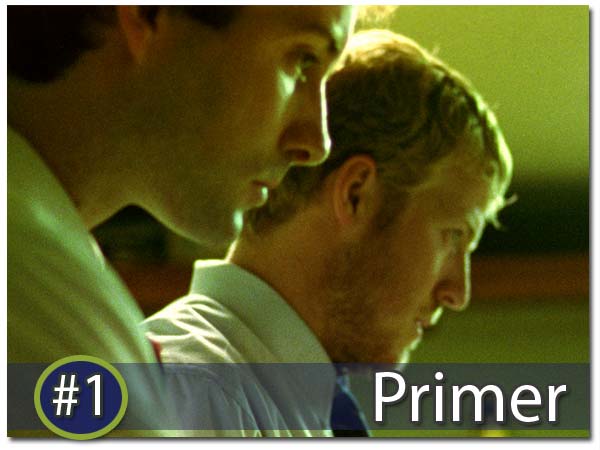 Much has been made of Primer’s low low low budget. Much has been made of the premise. But I’m here to tell you that Primer is by far and away the number one mind bender movie of all time. Bring your 300 million budget of Avatar and compare it to Primer’s $12k. Bring your big budget special effects of Inception and compare it to Primer’s zero special effects. Bring your amazing Hitchcockian writing and concepts. And you still don’t hold a candle to this movie. I here by throw the gauntlet down. If you can prove me wrong on this one I will UPS you a coke. Promise.

And what’s sad is that I’m betting that you haven’t heard of this movie. (“Primer? How do you even pronounce it? Pr-eh-mer? Pr-I-mer? bah.” I hear you say.) I read an interview with Shane Carruth, the director, writer, actor, financier, guru and demigod of Primer, and he was asked why he didn’t wrap up the movie and rewind it so everyone could end on the same page. What was his response? I didn’t want to talk down to my audience. Hahahah. I love that answer.

The basic premise is that a couple of part time engineers accidentally event a time machine. And it all goes to pot from there. The story is actually a meta-conversation around friendships. Two buddies who would do anything for each other are suddenly doubting each other. Two friends are suddenly second guessing not only each other but themselves. And from there it spirals to really dark areas of the brain that probably show us why we don’t have power over the fourth dimension.

Primer is where I will conclude this list. But I would love to hear your movies that fit this mind bending definition. Send ’em our way and I’ll add them to the list. Go on, I dare you to beat this list of Mind Benders.

Commenter Recommendations
And beat my list you have tried!! After allowing this post to stew a bit and allow others to comment on their preferred mind benders I have collected them and listed them below for easier consumption than having to read through all the comments. So here we go: