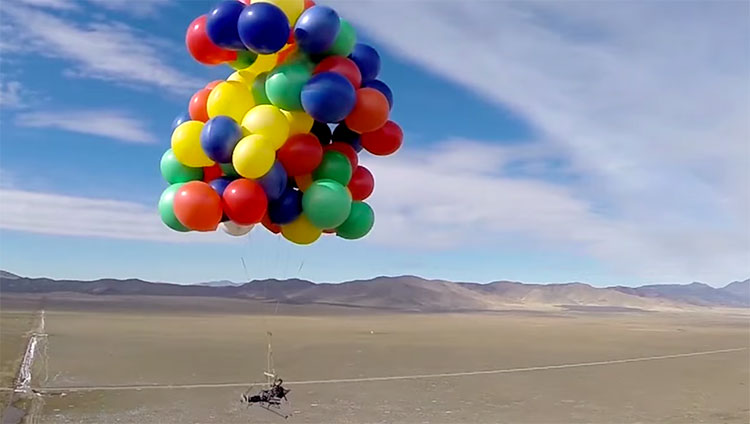 Real Life Up Balloon Launch via Rockstar
Urban Legends abound about the guy who fastened a million helium balloons to a lawn chair and escaped orbit. He brought a bb gun along in order to slow his ascent and bring him back to earth safely.

This is such a popular story that even Mythbusters tested the myth and said that it was possible to do. Although they never went up higher than 20 feet or so due to insurance issues. I mean, you can’t go and kill the popular hosts can you? Your money pot?! So obviously they had to stay close to terra-firma. But Rockstar and Erik Roner have tested the myth for real this time and took his lawn chair balloon launch to over 7,000 feet before seeing what would happen if he took a number of pot shots at the balloons with his shotgun.

Pretty cool to actually see him launch. But I would have preferred to see if he could have used his gun to drop himself in a controlled descent! But of all the dangerous things to do, that is without a doubt the craziest. Jumping out of a lawn chair at 7,000 is probably craziest enough for one day! hahah.