I have a fairly strong draw to the highly soap-operatic Downton Abbey.  I love everything about it.  The castles, and landscapes.  The villains and the Lords.  The back-stabbing and the conniving.  The romances and the marriages.  Maybe it just reminds me of England, and that’s why I love it so?  I mean, I love Sherlock as well, RIGHT?  hahah.  Anyway.  I enjoy it regardless.

Seeing as though I plastered “SPOILER” throughout the title, I’m not even going to listen if you all complain that I have ruined it for you.  Tough.  This post covers the highlights of the major details that concluded season 5’s Christmas special show. 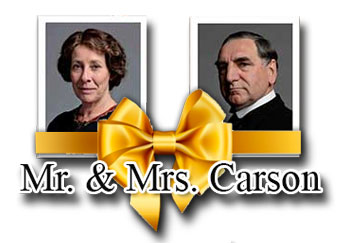 Possibly the biggest development that has been in the slow burn category has to be Mr. Carson and Mrs. Hughes. For the last season or more the two have been on a serious railroad towards love and you were an idiot if you didn’t see this coming from a million miles away. At the end of the show Mr. Carson joint signed Mrs. Hughes to the rental property that he had purchased.  Mrs. Hughes couldn’t afford it because of her ill sister. And then Mr. Carson took it even a step further and proposed. Thankfully Mrs. Hughes accepted.  So I expect we’ll have a servant wedding to start out season 6. 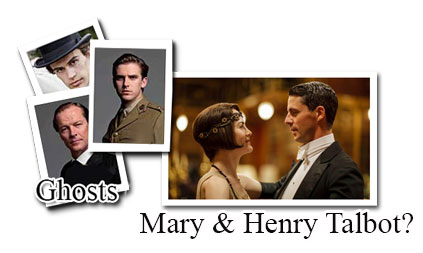 We literally know nothing about Henry Talbot.  Zilch.  Well, minus the fact that he is an extended friend of the family.  We can surmise that he is a good shot because of time in the war.  And he is extremely clever when it comes to the politics of the Abbey as he was able to surmise exactly what was happening with Lord Sinderby.  But I am predicting another wedding in Mary’s future solely because of Matthew Goode’s acting pedigree.  But I guarantee you I’m right on this front.  Mary and Henry will be married before the end of the next season.  Someone needs to counterbalance Mary now that Branson is heading to America. 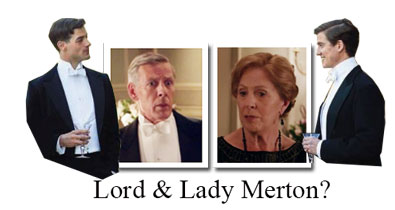 Lord & Lady Merton?!? – Alas, I’m not hearing wedding bells in Isobel’s future.  Lord Merton proposed, but his sons are actively blocking the marriage, and Isobel will not stand in the way of his relationship with his sons.  So I am actually not predicting a wedding in their future, even though I think it would be utterly fantastic if it eventually came together.  But I’m not holding my breath at this point. 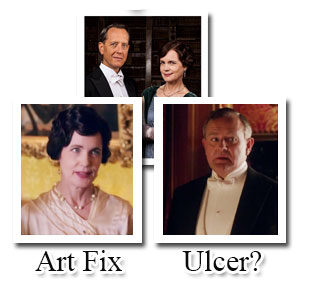 s – Throughout season five Lady Crawley began to hang out more and more with the art critic Simon Bricker.  She found acceptance and appreciation from him where Robert was completely clueless.  But the relationship came to a head one evening when Bricker let himself into Cora’s bedroom and Robert just so happened to return early.  A few episodes later the key painting Bricker had come to see was sold and the explosion wasn’t on anyone’s minds.  But Robert, at the end of the Christmas episode seems to be having health issues that he is none to pleased to discuss.  Apparently its an ulcer, but I personally doubt that that is all it is.  I’m guessing that this will lead to drama and purpose for Cora as well as Isobel.  We shall see come season 6 on that front though. 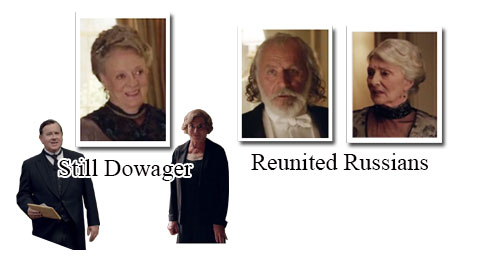 The Dowager & the Silver Fox – Well, Dame Maggie and Igor had their secret tryst rekindled there for a little bit.  But only to have it snuffed out by the clever machinations of the Dowager.  By doing some clever detective work of her own, the Dowager hunted down the old princess and brought her to England to douse water on the old Silver Fox.  The conversation between the princess and the dowager were definitely uncomfortable, but she did what it took to set things aright again. 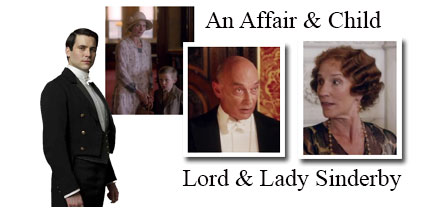 The Sinderby Saga – Half way through the Christmas episode, Barrows was fairly offended by the way Lord Sinderby took him down a notch.  In return he sent a message off to an old fling of Sinderby’s to come with the child and that he wanted to spend time with them both.  This could have caused an enormous scandal but disaster was narrowly avoided at the last minute.  But not before Barrow was avenged.  That Barrow.  He’s definitely the most interesting character in the entire show. 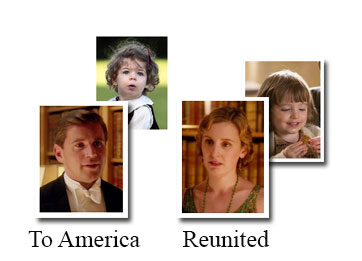 Branson & Edith’s Children – This season was an interesting one for Edith.  She managed to hide the fact that she had had a child out of wed-lock by stashing her with a nearby farmer.  Eventually she was able to “adopt” the child and be reunited with her once and for all.  But not before a whole heck of a lot of whaling and gnashing of teeth.  Branson on the other hand has decided that he will be taking his child with him off to America.  And so I assume this will be the last we see of the two of them for quite some time.

All in all, it was a pretty good season.  But I think the best episode of them all was definitely the Christmas episode which tide up loose ends and exploded other ones.  But most of all, we have to be thoroughly excited for Mr. Carson and Mrs. Hughes.  This is a truly big day for the two of them.  Well, anyway – here is my infographic of the various comings and goings of the show for all of season five.  Let me know if I missed anything significant, or I made any mistakes.  Lots of details here that are subtly hinted at.  Feel free to click the photo for the full sized version. 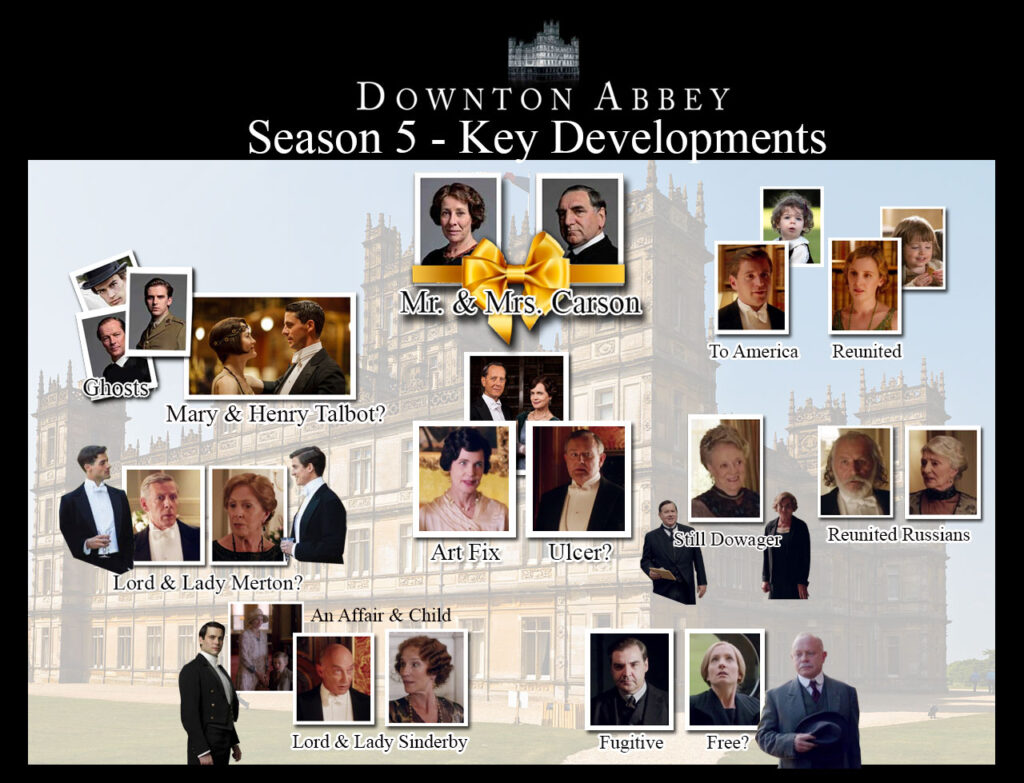