I just can’t contain myself.  It’s been like Christmas everyday around here of late.  So many think outside the box things going on in the world of movies, books and games.  This news is going to take a little bit of setup for some of you.  (Oh alright, 92% of you.) 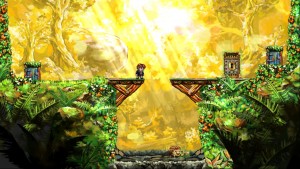 Once upon a time, there was a terrible blight upon the landscape of game development.  Game developers were churning out button-mashing mindless nonsense left and right.  Then in 2008, Jonathan Blow arrived and created a quaint little side scrolling game.  And it was cute.  And it was clever.  Oh wait.  Holy crap, how do you solve this level?  Anyone?  And that was level 3!?  It was so outside the box it jacked with your brain.  I remember walking on to a new level and just staring at it for ten minutes or more.  I wouldn’t even move.  My wife came in more than once and would say, “um, everything ok?”  And my response was always invariably, “Sure, why?  I’m playing a game.”  And she would say, “You aren’t moving.”  “Oh that… never mind that.”

The puzzles were so innovative and so tricky that many of them hurt my head to solve.  Think time travel and warping coupled with the greatest tricks and puzzles of Myst.  Yeah, they were hard.  But dang-it if they weren’t the most rewarding thing ever to complete.  I remember finishing the game without once looking up a cheat on the interwebs and thinking I was the king of the world.  I literally was bemoaning the fact that Xbox One didn’t have it on the arcade for me to go back and play again.  (Or Portal 1 or 2 for that matter.) 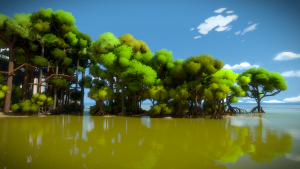 Well, now we have a new game from Braid developer Jonathan Blow to look forward to.  Apparently he and a group of guys have partnered to bring back the hay-day of the Myst gaming experience.  Their new game is set on a deserted island (yeah, familiar, but if it ain’t broke, don’t fix it) apparently strewn with puzzles here and there to solve in order to advance further into the game and discover who you are and why you are there. 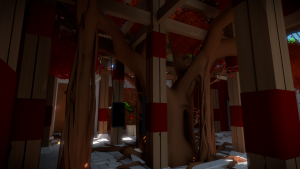 From everything I was able to gather, Blow and his gang were recently at a gaming convention and let slip that they probably had a couple months left of tweaking and cleaning up before the game will be releasable.  But here’s the real kick in the pants.  It’s going to Sony’s Playstation 4, the PC and iOS first. Gack!?  No Xbox One?  Really?  Pardon me whilst I pummel my head against this cinder brick wall over here.  Repeatedly.  Bah.  iPad should be worth the play… heck, I may even update my PC to get the full screen view going on for these graphics.

Some of the greatest gaming I’ve ever experienced I had while playing Myst.  Its funny to see kids today playing Myst on an iPad (which is available.)  I remember finishing homework in college at 2 am and cranking up Myst for a couple hours, only to have my roommate go absolutely bat crackers when I exclaimed in the middle of the night.  So, regardless of how retro it is, I’m uber excited that Jonathan will be picking up the format and taking it to new levels.

Below are some banners from the game that the developers used at the game conference.  I’ve also included the trailer for the game (which has an awesome wicked cool soundtrack from the ever awesome Mediaeval Baebes. 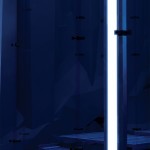 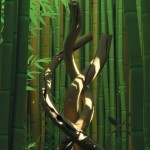 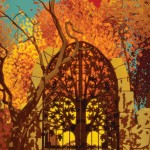 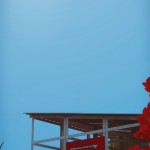 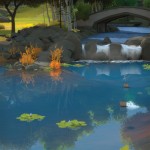 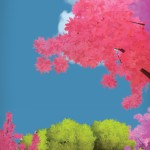 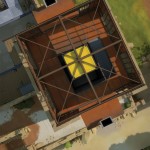 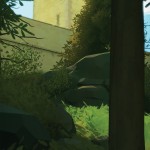 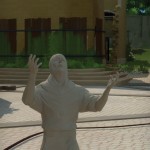 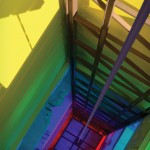 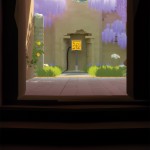 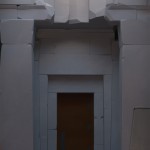 Here is the Twitch walkthrough.  I personally stopped watching it because we were basically being given the entire game in advance.  Way way too much for me.  Just give me the real deal – hand me the game already!  But maybe you are interested in watching?