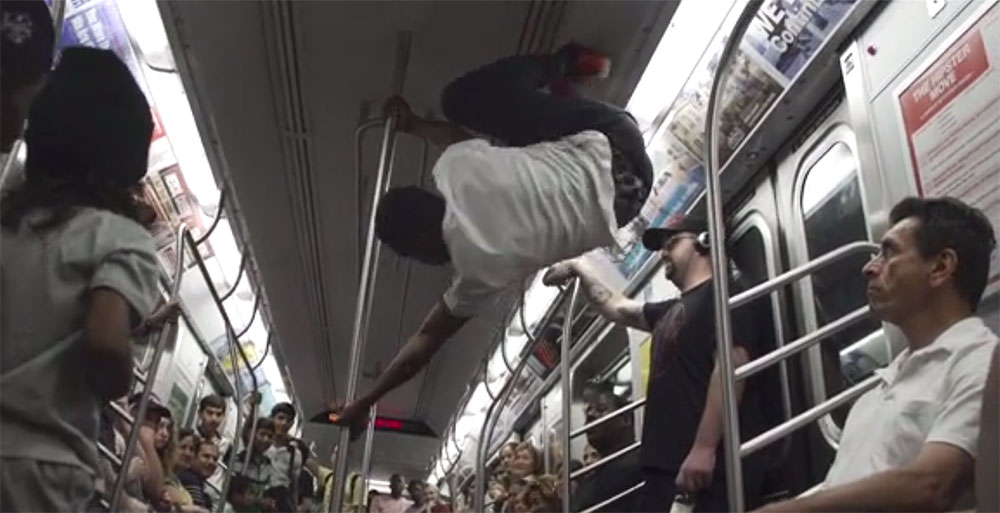 Have I told you guys I totally dig documentaries of all stripes and colors before?  Oh, that’s right, I have, more than once.  Well this short documentary out on Vimeo entitled Litefeet by Scott Carthy, is riveting.  Apparently dancing on subway trains in New York is illegal?  No clue.  And not only that, but that there is a thriving subculture just to support these guys that dance?  Even less of a clue.

But what amazed me about these guys is that it is somewhat reminiscent of breakdancing back in the 80’s, except these guys are like good!  hahah.  Some of the moves they drop are off the hook.  More reminiscent of juggling, or acrobatics than of dancing.  These guys even do quite a bit of contact juggling with their hats, shoes, etc.

I can contact juggle – you know what this is – single ball juggling?  Its when you roll a ball on your hands and arms continuously without picking it back up.  It was made most popular in the movie Labyrinth, when David Bowie’s character (Jareth the Goblin King if you were paying attention), or more to the point, the stunt double behind him, contact juggled the crystal ball.

I remember one time, I was flying back from somewhere (Jamaica maybe?) and I had my crystal juggling balls in my lap and I was contact juggling one of them.  Just quickly flipping them back and forth from hand to hand, more of a nervous twitch than a show really.  And the stewardess was standing next to me and watching, and she says, “OHH, a trick ball?” so I say, “Sure, its a trick ball, want to try?”  Which, looking back on it was a pretty dumb idea seeing as though the crystal ball was very hard and could have killed someone.  Anyway, she gave it a try and basically chucked the ball a good 10 feet, landing in the center aisle, and proceeded to roll all the way to the front of the plane as we were beginning to make our descent!  haha.  Anyway, what these guys do is way more innovative and interesting than anything I’ve been able to do.  You should check them out.

Litefeet from Scott Carthy on Vimeo.