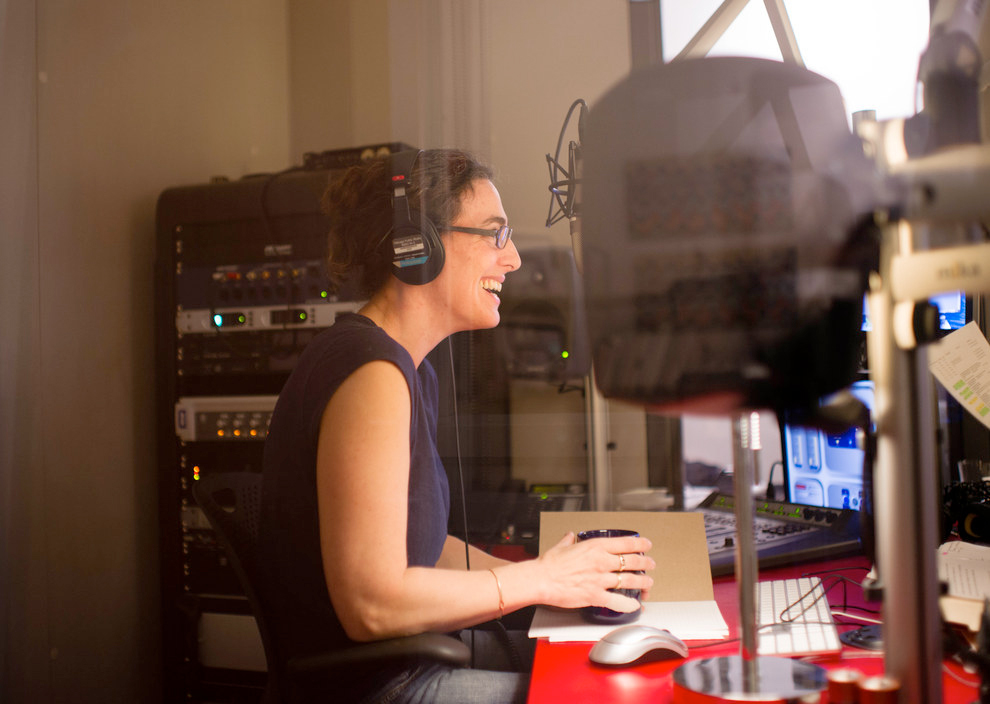 Not that we need more evidence of Serial’s absolute, and completely overwhelming hold on society, including our judicial system, but here it is all the same.  Asia McCLain has filed an affidavit stating that she was with Adnan between the times of 2:20 p.m and 2:40 p.m.  If you have absolutely no idea what I’m talking about – please just stop reading and go listen to the 12 podcasts detailing out the case against Adnan Syed in the murder of Hae Min Lee, his ex-girlfriend. 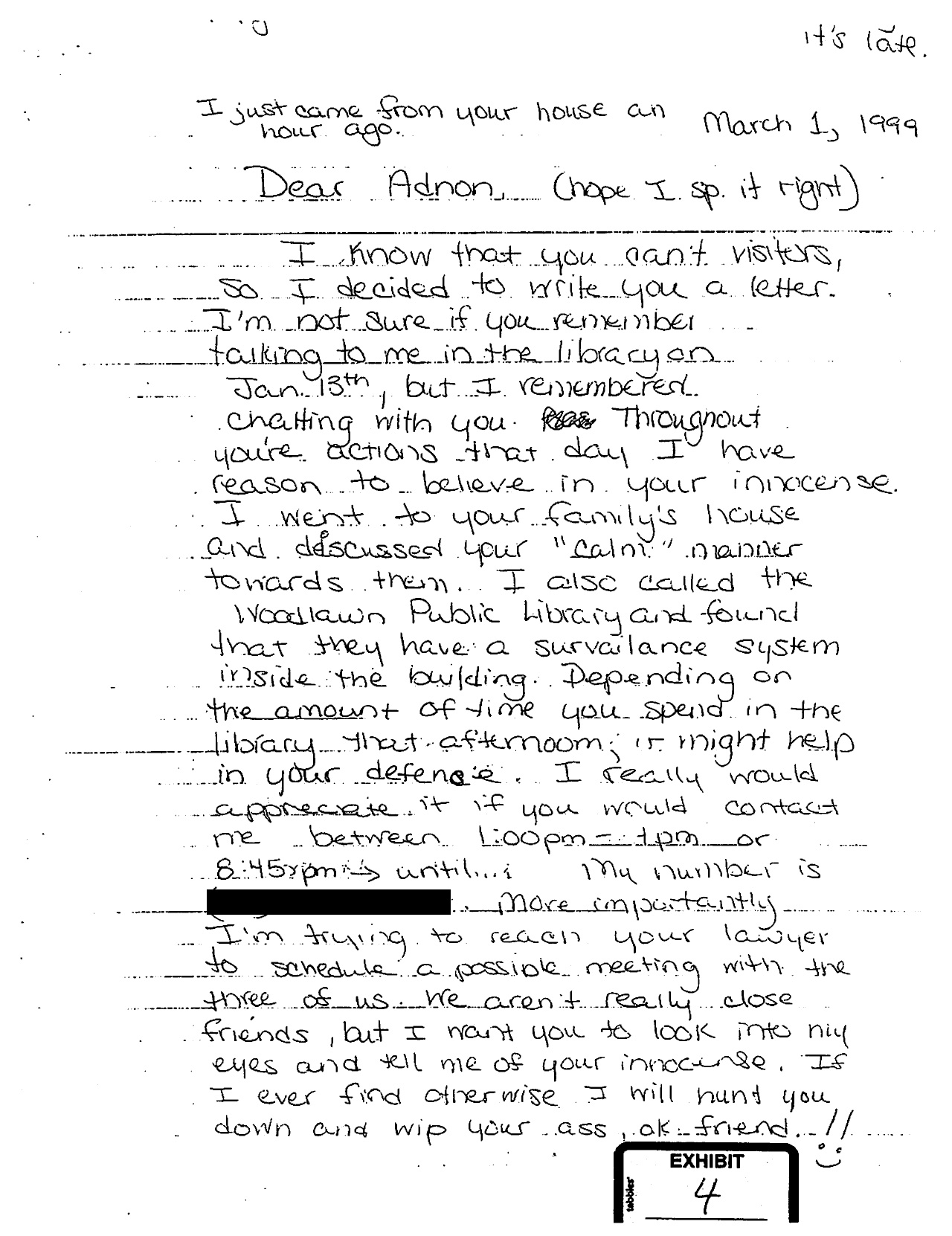 I have already talked about the case, and how extraordinarily good it is until I was completely blue in the face.  So I’m not going to try and convince you either.  But this affidavit is so significant, I am going to bet that it will get Adnan out of jail.  I am already on record stating that Adnan will get out of jail this year whether he’s innocent or not anyway.  But this is just one more official step on the road to his freedom.  This case was so poorly represented and the holes so gapingly huge on all sides that its a sham that Adnan ever went to jail in the first place.  I have included a photo of Asia’s original letter to Adnan that was used as evidence in the case, but she was never called as a witness – which is inexplicable to pretty much anyone that looks at the evidence at all.

Regardless, here are a few of the brief details of what is in the affidavit from Asia:

Prosecutors said Lee was dead by 2:36 p.m., but in an affidavit written after Syed was convicted of first-degree murder, McClain stated that she had been talking with him from about 2:20 p.m. to 2:40 p.m. (school let out at 2:15). McClain said no attorney ever reached out to her about her contact with Syed that day. It was only when a Syed family friend approached her after the trial that she wrote out her first affidavit.

McClain says she didn’t question the lack of attention paid to her during the trial because she assumed the evidence against Syed must have been much stronger than anything her after-school chat could have toppled. Syed was convicted based on cellphone records showing his location and the testimony of a witness, Jay Wilds, who said Syed told him he killed Lee and that he helped Syed bury her body. But as “Serial” laid out, Wilds’ story shifted over the course of multiple interviews with investigators, and host Sarah Koenig called into question the accuracy of the cell tower records.

Since going to jail, Syed has petitioned for appeals numerous times.  The latest appeal that is being heard by the state is the claim that Cristina Gutierrez was providing ineffective defense.  The claim says that since Syed’s lawyer did not contact Asia and have her testify that he was inadequately represented.  McClain is a very solid alibi during the prosecutions timeline that states Hae died during the time Adnan was with Asia. It should be noted that Adnan’s new defense team did try and get ahold of Asia back in 2010, but she chose not to speak to them.  Instead, Asia spoke with the former prosecutor of the trial Kevin Urick.  And we even heard some of those recordings from the appeal proceedings and heard Urick tell that Asia was being asked specific questions about an affidavit back during the original trial.

But now, Asia addresses those concerns in her new affidavit, and states that it was Urick who dissuaded her from testifying because the prosecutions case was just that strong, and that her testimony wouldn’t do anything to keep from helping his defense.  Which seems extraordinarily bizarre to me.  And should be looked into, if that really is the case.  But it should be noted that Urick has already commented on the allegation from McClain’s affidavit and said, he did not specifically state that she shouldn’t testify, but that the prosecutions case was just very strong.  I can’t wait to see how that particular ripple plays out.

And so we see yet another example of how the Serial Podcast is not just great entertainment, but that it is also changing lives in the real world.  Have I mentioned yet that I’m dying to get my hands on Serial Season 2?  But if you are interested in Podcasts or Television shows that may fill the void here are a few that you may want to pick up:

Invisibilia – really great podcast from NPR about the invisible forces in our lives that control us, fear, thoughts, perceptions, etc.

Criminal – features stories about people caught up in crime, impacted by crime, or somehow caught in the middle.  Great little show.  Reminds me a lot of Radio Lab for crime.

Black Mirror – is not a podcast.  But I’m betting that if you liked Serial, or that you are human, either one, you’ll dig it.

Well, I’m sure I will continue to keep you updated as new details of the Serial Season One Podcast continues to cause ripples in the real world. Oh, and by the way, there are many a rumor running about the world of the interwebs that Serial is being chased by several houses to create a TV series (see what I did there) out of it. Have you heard this as well? Does anyone have anything that corroborates these rumors?