A Few Photoshop Memories Over the Past 25 Years

This week is Photoshop’s 25th birthday.  And so I figured, hell, why not wax a little poetic about the app that has changed my life dramatically. Like for example this photo mashup I did of Shane Carruth for an open letter to the man himself… (my appeal didn’t get his attention, anyone, anyone?)

I’ve been using Photoslop (as I’ve called it all these years) since version 1.0.  Happened upon a pirated version and dabbled with it a little bit.  At first I didn’t get it.  How it worked.  What it was for.  But I had it on my hard drive.  By 2.0 I had gotten an educational license from the school I attended and I had just started getting the hang of the layers concept.  I then fell in love with creating drop shadows manually.  For you hardcore Photoslop users, you remember when you couldn’t just add a dropshadow filter onto a layer… you had to do it by hand.  Select your object, add layer, fill selection with black, gaussian blur the heck out of your black, shift the layer to the left or the right.  Voila, you have a drop shadow effect. Yes. It was that hard to do back then.  Now though? Double click the layer – check the drop shadow check box.  Done.  Almost embarrassing really.

Here is a photo that I hope you can’t tell hasn’t been modified.  Its something I’m currently working on for a future post.  This was sketched in a moleskin by artist Pat Perry.  So the sketch had a fold running down the middle of it.  I decided I’d like to use it personally as my wall paper – and so I figured it’d make more sense without the fold.  So I painted it out.  With Photoslop, this is doable.  Try this with another paint program and good luck, see you in six months. 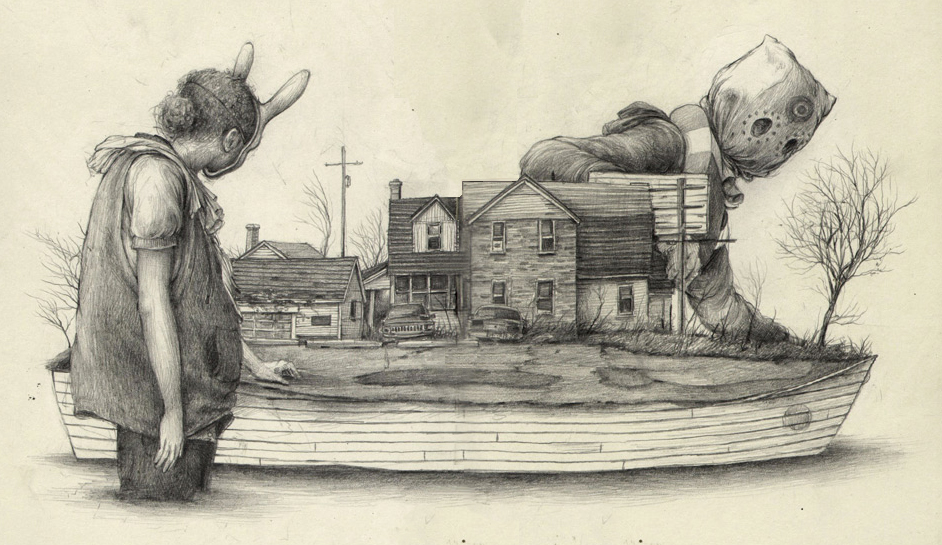 It isn’t perfect yet, as I have only just started, but you get the point.  I recently began working on a project, just for giggles, of removing all the skin and faces from a photo I took of a bunch of people walking in the street in Amsterdam.  I left all the clothes bits, but the heads, arms, legs, I’ve been erasing them all.  And there are like 250 people in this photo.  Person overlapping with person over lapping with person.  Its almost a voyage of discovery of finding what would be back there if…  its a silly project.  Probably one I’ll never show anyone. But its one of those things I do because I can inside Photoshop. 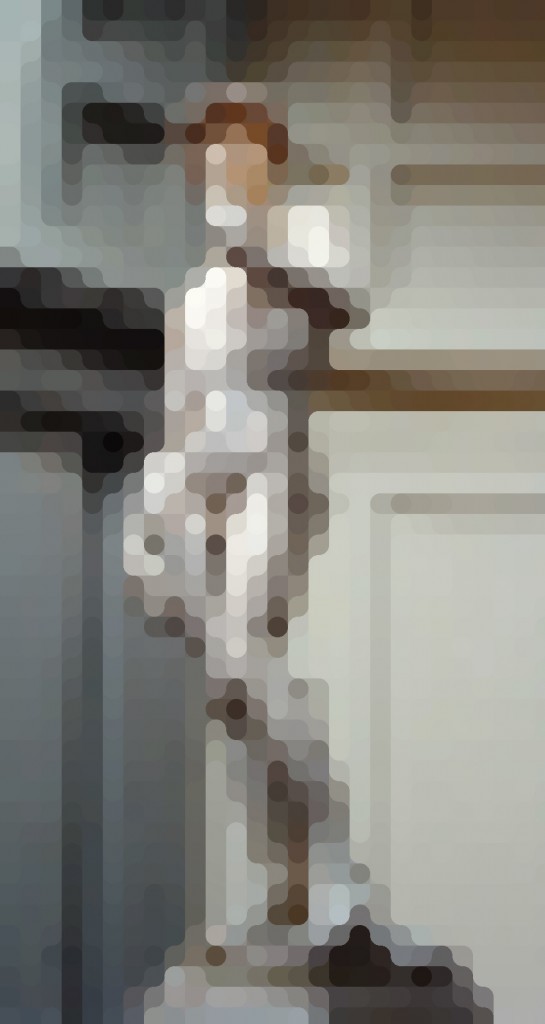 A recent post I did about an artist that was utilizing pantone swatches is most telling about what is possible with Photoshop.  By using actions and developing some pre-recorded macros, I was able to similarly modify classic works of art into cubist abstract works of their former counterparts.  The image manipulations technically could have been done by hand but I would have never tried to do them even manually without Photoshop.  But the ability even now to script and manipulate photos with actions is why Photoshop has just been an invaluable asset in my life for the last 25 years.

At work I create graphics for graphs and statistics.  My team laughs that Photoshop is my Excel.  Which I don’t exactly disagree with.  Its easier to make up numbers in Photoshop than in Excel I respond!  Graphs pop when developed in Photoshop!  hahah.  Although I really do create most of my graphs in Photoshop based on my Excel data.

Photoshop is getting a lot of bad press over the past couple of days with the Beyonce leaked photos before they were retouched.  But this should surprise no one!  Its so so simple to clear up acne, or drop the extra 15 pounds you gained over Christmas holiday.  So of course a cosmetic company is going to use the HECK out of Photoshop to sell their products.  To smooth that bumpy skin?  Just grab the smudge tool, select a soft round brush, dial down the hardness, and smear along the contours of the face and voila.  You too can have the fake skin of Beyonce.

Which brings me to my final example of how I have utilized Photoshop.  This too came from an idea where an artist converted a work of art from the colors to the data and posted the data in a frame.  I figured that went one step too far – and decided to merge the data, and the photo into a single frame of three different states.

This was only doable via Photoshop.  Once I had the data of the photo (which took 3 minutes) I layered the data across the top of the area of the painting, and the removed the delta between the two.  I aligned the three together and in less that 15 minutes I had my own piece of “art”.

The only flaw with Photoshop is that it makes extremely complex things so easy, and just so simple, I don’t value the work of the application nearly enough.  Right?  Just because it would have taken me 12 days to pull off that Michelangelo statue effect it should still be an amazing work of art even if it only took me 30 minutes or so in Photoshop.  But I value it that way.  I see it as an interesting experiment and that’s about it.  We should all see Photoshop for what it is – a democratizer of the arts.  I mean, otherwise, how do we get lol catz and I can has cheesebergers?

Regardless… thanks Adobe, for picking up Photoshop back when it was still Imagepro.  Thanks for enabling super powerful image editing for the masses and literally bringing it out of the Pixar.  (Long story – feel free to read it here.)  I know that my own life would be radically different without Photoshop not being in it.  Here’s to Photoshop’s next 25!