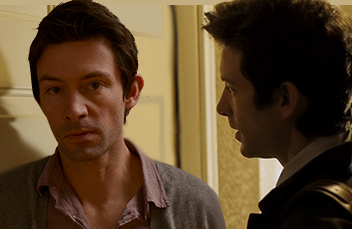 An Open Letter To Shane Carruth

An Open Letter To Shane Carruth

Someone recently hinted that they MIGHT be able get me access to Mr. Carruth in order to ask a few questions.  I passed out.  I then Got back up again and I then proceeded jerk about the floor in apoplectic shock.  Some of you would go into seizures if you got a chance to meet Bono, Barrack Obama, or maybe Brad Pitt & Angelina Jolie etc or whatever.  But for me the only individuals that would do that to me would be Christopher Nolan or Shane Carruth.  You track People magazine for Riahanna rumors.  I track the web for Shane Carruth rumors. Remember back in the day when we scoured the news day after day for hints that there might be a movie after Return of the Jedi (was I the only one who did this?) – yeah, that’s me every day hoping for news on the next Carruth sighting.

But before I delve further – are you guys even aware who the heck Shane Carruth even is?  Let’s digress a bit before we leap forward to my open letter.  Because, unfortunately, [pullquote]Shane may not exactly be a household name yet, though he should be.[/pullquote] Shane happens to be a writer. Oh no wait, he’s also a director. Check that, he’s also an actor, a producer, an editor. Oh did I mention he’s also a sound editor, and a financier. An executive producer and musician. He’s a grip, a lighting technician, special effects supervisor etc etc. But of WHAT? Of Primer, that’s what. Possibly one of the best Science Fiction movies of all time. WHAT? Better than 2001 A Space Odyssey? Better than all the Star Treks ever? Wait, BETTER THAN THE EMPIRE STRIKES BACK? Ok, maybe I won’t go that far. And you still haven’t heard of him? Right, see, we need to rectify this incongruity. Like pronto.

Primer went on to win the Grand Jury prize at the 2004 Sundance Film Festival. Shane’s second movie, Upstream Color was the darling of the 2013 Sundance Film Festival and even trended higher than the festival itself on Twitter. So even objectively I’m not completely insane on this particular point… only partially, and that is no fault of Carruth’s at all.  I want to make that perfectly clear. If you’ve read my blog at all over the years you know that I have covered Shane pretty extensively already:

So recently I had someone reach out to me that asked if I had a few questions for Mr. Carruth himself. And that got me really started thinking. If he was standing here, like right now, what would I talk to him about?  Well besides my charming personality and my amazing talent for fetching coffee, dry cleaning, and walking one’s dog.  I mean besides that.  But I figured that, heck, might as well sort out my questions for the man… and maybe someday someone would let him know that there was a guy out there on the interwebs with a few questions, and he’d know to run as far and as fast as physically possible.  So this is me attempting (quite unsuccessfully) to limit my questions in the hopes that one Mr. Carruth himself may actually take a gander and respond:

Let’s start big. The Modern Ocean is your next project. How is that going? Are you still on track to shoot this coming summer? I haven’t seen you talking much about it since Sundance.  How has the script come together? Do you need another set of eyes to run it by? Or an extra?  Haha.

Question Insight – Shane has stated that The Modern Ocean will be similar in feel as Upstream Color but without the Sci-Fi elements.  “It’s a much bigger story, about ships at war at sea, with pirates and privateers and great tragic romances.”  Every discussion he’s had about The Modern Ocean has hinted that it is a very ambitious script and that occasionally he bites off more than he can chew.  He’s ambitious let’s just say… which is obvious just by a quick review of his body of work so far.

The mechanics of your movies are complicated. (Yes, call me Captain Obvious) But I’m assuming it is just a device to get at the more interesting overarching topic you are hoping to communicate. Do you find that the complexity of the narrative has unintentionally detracted or is it a clever way to batter the brain into submission and get to the larger emotive topic you are hoping to communicate?

Insight into my question –  I have recommended (forget that, I have PHYSICALLY HANDED) Primer to so many people I’ve lost track over the years. And when I tell them that it is about a friendship strained to the breaking point by infinite power they invariably come back to me and say, ‘Dude, you are so smoking crack. That movie was incomprehensible! Friendship?  HAHAH.’ So I’m just curious if maybe Shane has also seen this problem that the audience can’t arrive at a point to even get at the basic premise of the movie – or if on the whole do people tend to get it, even if they focus on the wrong things? Or better yet, maybe the audience is so lost they ignore the science fiction aspects and they actually jump to the larger point even faster?  I personally believe that Shane’s movies do something to me emotionally that is truly rare.  And yet, the logical centers of brain are simultaneously on overload.  Maybe that’s intentional?

If you could go back in time to when you had a finished (or working) script of A Topiary what would you do differently right now? You are definitely on record as not wanting to move forward with it, I’m just curious how it has changed how you will fund, scope and execute your future projects.

Insight into my question –  I’ve heard Shane say more than once that he’s done doing the financing thing and that he’s going to do it himself from now on after the chaos surrounding A Topiary.  And yet, Shane has said that Upstream Color is definitely not a repeatable endeavor – and yet – Shane has made this non-repeatable endeavor his signature style.  I would think that a move with any sort of maritime aspect would be tragically expensive to make (Water World anyone?  Ok, that was an unfair edge case.)

With regard to your script writing style you have a very short cut, truncated method to the dialogue. Some find this very distracting. I personally think its ultra-realistic (supra-sub-realistic?) and lends credibility to the authenticity of the scene. Do you plan to change this conversational clipped tone? Or do you think your detractors are missing it?

Insight into my question – Primer, A Topiary (the script anyway) and Upstream Color all use this same sort of dialogue style and I think its genius. If Shane and I were hanging out (Wait, I think I just wet myself a bit… I’m ok now) I wouldn’t say,  “Shane, could you do me a favor and hand me the mustard to the left of the napkin holder?”   I would say, “Hey Shane, hand me the” and I would indicate with a gesture and continue saying what I was saying. Because the mustard isn’t the point. Its a detraction from the point of the conversation and I would want the mustard business to go away as quickly as possible. But most writers use my former example as their de facto method which is laborious and unrealistic. The closest script writer to maintain and support Carruth’s style and short hand that I know would be none other than Sorkin. And oh by the way he is a script writing god. (As I’ve pointed out more than once here on the blog.)

Shane, your two (and assuming A Topiary, not to mention A Modern Ocean) movies have a very distinct mood and feel to them that are almost another character to the movie entirely. When you begin writing your scripts do you also have in mind the music and the visuals or do you just assume, insert that you’ll insert the mood and feel after the fact?

Insight into my question – One of the greatest things about Shane’s movie making magic is that he crafts a holistic experience that is comprehensive in its feel and immersiveness. Attempting to distill a Carruth movie into an explanation of narrative is impossible. Guy meets Girl. Girl and Guy fall in love. Birds. Worms. Sunsets. Sound samples. Guy gets shot. It just doesn’t make sense to explain a Carruth movie. It needs to be experienced.

Within the Evangelical Christian community much has been made of your faith – being a Christian myself – I’m curious how you see yourself, your calling and how you see your movie making in relationship to your larger story? I personally, as a web guru that works for Compassion International, have copped out by jumping on the non-profit “calling” band wagon. But would love a fantastic excuse to come design and build epic websites for your new movies as they come out!  Sorry, that was off topic.  But seriously, how do you see your larger, meta-narrative melding with your film making calling?  Which I definitely believe is a God given talent.

Insight into my question –  Seriously, this is an important question for me. I’d love to see how Shane navigates this particular question as I look up to him as a visionary and an example of what excellence looks like in every area of our lives. Shane has obviously not settled and that is amazing especially considering just how fantastic these two movies are that he’s created.  The question isn’t the normal – talk to me about your Christian life in Hollywood.  Its more about how Shane sees God’s calling on his life, and the part he plays in God’s larger tapestry.

How do your scripts come to you?  You have said in past interviews that you get general themes and then you work on the architecture of the space which you then populate with characters.  Did your idea for The Modern Ocean come fully formed and then you moved to the concept of shipping containers, pirates and star-crossed lovers?  Or did the shipping lanes come first?  And my final question on the screenplay is whether you have ever released A Topiary to the world – I have seen sketch copies floating around, but it would be awesome to read an approved version.

Insight into my question –  I have done enough writing to get how this could be problematic… ie, there are too MANY ideas to develop as opposed to not enough.  So I’m curious if that is his problem or maybe its the inverse problem. Some authors believe that notebooks are for idiots… a good idea is going to stick and a bad idea will just go away as it should.  So the thought behind this particular question is more to the mechanics of Mr. Carruth’s particular style and daily routine.

You’ve mentioned your love for reading in previous interviews – could you share what your favorite recent read has been?  And along similar lines, what movie has poleaxed you lately?

Alright, who knows if these questions will ever get answered by Mr. Carruth or not… but its worth a shot.  I may actually start a new Hail Mary segment wherein I write questions to famous people and see if the magic of the world wide web and through the six degrees of separation of kevin bacon maybe we could get them answered.  Brilliant.  Make it so.  Well, thanks for coming and reading the random ramblings of a hardcore fanboy.