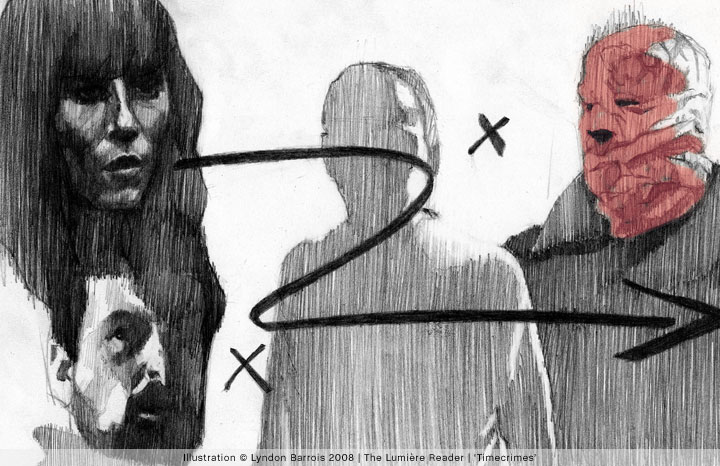 Taylor Holmes
cinema
February 26, 2015
Timecrimes is a time travel classic and cannot be missed really by anyone that has any love for the genre at all, whatsoever. No exceptions. Hello? Is this thing on here? Tap. Tap. IMDB
Screenplay
Mindjobness
Acting
Action
Reader Rating6 Votes
4.4

Over the last year or two there have been a number of people on this site who have recommended that I watch a Spanish movie entitled TimeCrimes, or as it is entitled in Spanish, “Los cronocrímenes”.   Over the past 5 years or more there have been rumors of the rights TimeCrimes having gone over to Dreamworks and a script that has been written by Steve Zaillian.  But there hasn’t been any confirmed movement on the script in the last couple of years.  But that’s ok, because the original is definitely better than anything that a U.S. studio will be able to pull together.

First things first – this isn’t a review.  It’s a spoiler filled discussion of how the movie TimeCrimes works.  How the timeline snuggly fits together.  A discussion of the actions in the movie from beginning to end.  So if you haven’t seen the movie this is your final warning.

I would like to say that in the last two weeks I’ve seen a pile of very good time travel movies that I’ve been hoping to review out here.  Predestination and TimeLapse are the two I dug the most… that was until I cam across TimeCrimes.  I watched the first 30 minutes, and I knew, I just KNEW where the film was going.  I figured out many of the basic elements of the movie.  But what I didn’t grasp was that I’d only figured out a third of the movie.  It wasn’t until the closing 30 minutes that I realized there was an entirely different twist up this stylish little indie Spanish thriller.  And that was when I sat up and really began to take notice.

The major plot details of TimeCrimes is necessarily thin.  Hector and his wife are remodeling their home.  Hector notices someone off in the trees and then goes and investigates.  He finds a possibly dead woman and begins to flee when he’s stabbed by a bandaged man.  Hector makes his way to a scientific facility where he meets a scientist.  The bandaged man is chasing them both when the scientist invites Hector to hide in one of the machines.  That is when the movie begins to take off, because the machine is actually a time machine, and the machine has just sent Hector backwards in time about an hour.  An hour? What can you do with an hour, you ask?  Well, apparently plenty.  When there is a time machine involved there is plenty of chaos that can still happen.

When I first watched TimeCrimes, I was struggling to understand if the TimeCrimes time travel system was deterministic or if time could actually change as the movie moved forward.  A lot of this confusion centered around the young woman… who she was, how many times did she die?  Did she die at all?  Was Hector’s wife killed and then saved?  Was she killed at all?  Etc.  I also wasn’t sure how the time machine worked.  But seeing as though this was the first time that a “vertibrate had entered” the machine, they didn’t understand it either. And so I figured, why not get ahold of Nacho Vigalondo, the writer and director of the movie, and ask him directly some of these questions via Twitter.  He was nice enough to entertain my crazy questions and more, and yet was slippery enough to keep fan-boys like me from pinning him down and dead-ending his movie.

The first question I tried my best to get out of him was around whether or not events were changeable inside his concept of time travel.  Specifically this is exactly what I asked him: “In TimeCrimes, did you see time as immoveable and unchangeable? Or do you think that Hector could have changed the past if he had chosen?”  And his response?  “The question is much more interesting than any possible answer!”  Strike one!  But I think that from what we are shown it is pretty clear that the events of time were very locked in place.  Hector 2 and Hector 3 were definitely doomed to play the roles determined for them in Hector 1’s timeline.  Hector 2 and Hector 3 both attempted to keep Hector 1 from continuing forward and all that happened was that he crashed his car and truck and ended up stabbing himself.

And relevant question I pushed him on was in regards to his favorite time travel movies. I assumed that if he gave me an answer like Primer, we would know that time was fluid, and manipulation of time would obviously be possible.  But instead he answered that his favorite Time travel movie was 12 Monkeys.  Notice he didn’t say 12 Monkeys the television show, which is a completely different answer entirely.  Terry Gilliam, the director of 12 Monkeys, was famous for his fatalism when it comes to the future and it showed through in his views on time travel as well.  When asked about his influences and favorites, Nacho Vigalondo also said, “I was inspired by literary sci-fi, tales from Philip K. Dick, Robert Heinlein, Alfred Bester…”

So, after talking with Nacho, and working the buttons off of my remote, I think I have a pretty good handle on the large overarching rules upon which TimeCrimes operates.

1. A person can only go as far back in time as the machine was turned on.  (Primer-esque)

2. The Time Machine required 4 specific power modules to work and some undescribed liquid.

3. Time travelers actually never changed time, ever… they were actually required to play their part as previously prescribed.

4. Contact with one’s self does nothing – no event horizon, no end of world chaos, nada.

I went back through the movie and detailed out all of the major events of the movie as they happened from start to finish in order to help us remember what exactly happened.  The more interesting timeline will come next, when I give you the events in chronological order. But for now here are the events in the movie as we follow Hector 1, then Hector 2, and then on to Hector 3…

And now, this is where we really learn exactly what happened.  This is our chronological walk through from beginning to end of the events.  Not the order in which they occurred in the movie:

It was good to see the timeline laid out linearly, but it wasn’t until I had diagrammatically illustrated the flow did it really make sense to me.  This image is extremely large, and won’t be readable unless you click on the link and enbiggify it.

One of the questions I was most interested in asking Nacho about his movie was, “When writing, how’d you figure out how the plot would interweave? Did u create a timeline 1st, did youu create a map of all the Hector’s locations?”   And here is Nacho’s reponse:

“The funny thing is that, in order to make the script, I had to draw a diagram similar to the one I drew in the movie! A bit more complex, but essentially the same.”

After I showed him my timeline above he cracked me up when he said, “Thanks! This is amazing, sir.” Which I immediately took to mean – you are completely insane.  But good luck to you on this endeavor of yours! hahaha.

I think overall TimeCrimes is a really quite good time travel movie because it holds up in the end. The story continues to loop back on itself, and the events hold up the deeper you go.  Where TimeCrimes is different than other time travel movies is that instead of the future influencing the past, in TimeCrimes the past influences the future… which is hard to really even understand.  But in Hector 1’s timeline we are given a set of events that Hector 2 and 3 work diligently to uphold, whether intentionally or accidentally.  Definitely backwards from a standard time travel movie layout.  I still wish that Nacho had answered my question about whether Hector could have changed the future.  But outside of that, we can only assume from what we are given from the movie that the answer is a resounding no.

Recently I’ve had a number of you recommend this movie to me.  So thanks for that.  I’ve also seen a couple short film makers mention it as well.  So I appreciate everyone pointing me this way.  I’ve recently seen a number of fascinating time travel movies that I need to review out here.  Ethan Hawke’s Predestination, and Time Lapse being the two most obvious examples.  Coherence (not a time travel movie, but still a sort of a time/space jump movie) is also on my list.

Regardless, I’d love to know your thoughts on whether I got the timeline right of the events and have accurately figured out the timeline in TimeCrimes.  It was a fairly complicated beast to unwind.  As a final nugget from my conversation with Nacho, when I asked him about American film rights, and the possibility of a Hollywood studio remaking his movie he said, “I know they keep buying rights every time they get old, it seems they are still interested somehow.”  So maybe there is hope for a big budget version of Nacho’s script coming to fruition some day.  Until then.