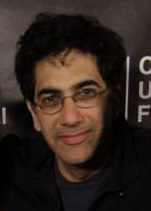 Modern Hero Interview With Ramin Serry
A week or two ago I highlighted a time traveling, dad saves the word, short movie that I just completely flipped for. I just thought it was hysterical, and inventive in that low budget but uber clever way. Ramin did a great job pulling it all together into a fascinating story that seemed way bigger than it really was. It has very very real world implications in my own life. It has its roots in truth… it speaks to fatherhood, and to parenting in a way that I really though profound. And what better way then speaking truth into people’s lives than to do it in a smart and clever way?

So anyway – if you didn’t see the movie, you can jump to the bottom, I’ve included it there for you as well. Well, long story short, I shouted out to Ramin and he was kind enough to answer a couple questions that I asked him about the short. Man, I love this hobby of mine. I meet, and talk to so many, just so many cool people. This is just one more example of the power of simple communication. So much better to learn from people when you actually ask!

Taylor – First and foremost, I have to say, that as a father I completely and totally resound to the concept of redemption in your short, future hero. The clueless father figure getting a second chance, bumping out the potential fling/new husband, restoring his relationship with his son, saving the lives of everyone?!? Is this intentionally central or am I just deeply in need of counseling?!

Ramin – You’re right on target. The story is rooted in my own feelings of guilt and self-criticism over my performance as a father. I think I made it to say to myself, “Hey man, step up! You can be a better dad!”

Taylor – Future Hero could so easily expand into a full feature length movie with its lovely characters and writing, though it is thoroughly self deprecating, and unpretentious, do you have any 90 minute dreams for our Future Hero?

Ramin – I would love to expand Future Hero into a feature. I’ve been toying with some ideas, which include the addition of a major female character. Hollywood doesn’t make very many big sci-fi comedies anymore. That spirit now lives on, for the most part, in animated films. I’d love to bring it back to the live-action world.

Taylor – While this basically is the story of the Terminator recreated, it couldn’t be any further from the Terminator… How did you originally come up with the story?

Ramin – I came up with it after my wife had our second child, Henry, who, by the way, “plays” the baby in the movie. We were sleep-deprived and I fantasized a lot about fast-forwarding in time so I could see what my son would be like as an adult. Then I thought, “What if my son doesn’t like me so much?” and that became the basis for the story.

But it wasn’t originally meant to include a reference to Terminator. The first script was actually a wedding movie, where the son comes back from the future and tries to break up his parents’ marriage because he knows it is going to turn out badly. But that idea led to some major confusion over how the story could play out logically. Somehow I stumbled upon the idea that maybe the son should be desperately trying to save his own life. This led to the idea of a killer android, which made me realize that I had run smack dab into the story for The Terminator. I decided to embrace the Terminator reference and it became the basis for the entire style of the movie, including the cinematography and the music.

Taylor – The movie felt like a live action version of the Incredibles, with its wonderful sense of humor and washed up hero – how long did it take to pull this together and execute?

Ramin – It was a 2-day shoot and, except for some rain, the shoot went very smoothly. It helped that I had such great, comedically-gifted actors in Ryan Woodle, Lucas Kavner and Kathy Searle. They all took what was a pretty good script and made it way funnier. I have a lot of hilarious outtakes where Ryan and Lucas call each other names, like “vest boy” and “beard face.” We all had a lot of fun.

So here’s the short, if you missed it last time. (You do read every single post of mine? WHA? You should! I post every single day at 5:00 am. (Well 8 months straight I haven’t missed a day anyway.) come back and check me out tomorrow morning.  Sorry for the ad.) Thanks Ramin for taking the time out to chat with us all about your stellar movie. I adore it!