Sometimes a photographer comes along that is so amazing and so eye opening to what there is in the world it really takes you aback. I mean, there are whole worlds of possibility of exploration and possibility that you have no idea about until you see these types of photos.

When I was younger, and living in Los Angeles, I would often go downtown to Echo Park to visit cousins – which is right in the heart of LA – and we would explore. And by explore, I don’t mean play at the edge of the lake. Or climb a tree. That would probably be the everyday explorations of normal children. But every time I visited we would make a bee-line for the park to see if we could find something new and different… underground. You see, there were several cement outbuildings there at the park that we figured out a secret way into. And once inside – it was like something straight out of LOST… minus the button of course. There were tunnels, ladders, water rooms, overflow areas, control rooms, missle silos… well, at least, in my memory of it anyway. It was an extraordinarily awesome experience every single moment we were down there. The world faded and the only thing that I was conscious of was – what else is there to find?

But those moments in my life have been rare. I remember when I worked on Capitol Hill as a Senate staffer I had a badge that let me get places that I had only dreamed about going before. And oh how I used (abused?) it. Please remember this was before 9/11, and the security just wasn’t like it was afterwards. But I would find these locked doors down in the catacombs and wonder, hrmmm, where does that go? Eventually I found ways to get behind the doors and would wander deeper and deeper just to see where they went. When you live your life realizing its better to ask for forgiveness than to ask for permission, the next thing you know you find yourself in crazy places.

During a White House tour (it was for all the interns on the Hill at that time – and yeah, Lewinsky was there that same year. Let the jokes begin.) I found a hidden away elevator and I thought, I wonder where that goes? And next thing I knew I was walking around the residence. 30 seconds after that I was being walked back to the elevator by two very impressive men with guns strapped to their chests. Another time (after I quit working for Senator Grassley, and my badge accesses had all been revoked) I was taking some friends of our family to the Hill, and I had noticed while working there that for most guys, it was more in vogue to have your lanyard on, and then they slid their actual pass into their chest pocket. And when you acted like you owned the place, you were meant to be there, no one gave you any hassle. Occasionally they’s ask you to pull out your pass and validate it. So I decided to see if I could get my friends onto the floor of the Senate during a debate. And the next thing I knew I was there on the floor, without security clearance, introducing my friends to all manner of Senators I had no right introducing them to! hahah. Kinda laugh about it now. But seems a little much looking back on it.

All that to say, getting into places one shouldn’t be in, is a lot – let me repeat that, A LOT – of fun. Which brings me to Christian Richter. Christian is a photographer that was raised in the former East Germany. When the wall came down in 1990 there were numerous institutions, factories and buildings on the Eastern side of Germany that had been abandoned and left to the natural detritus that occurs over time. And here are some of his amazing photos – of which you can see more over at his site. 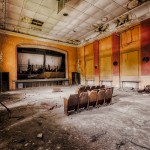 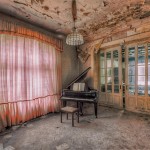 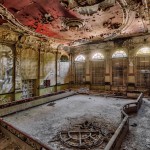 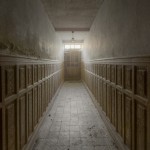 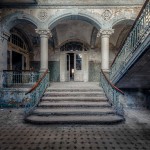 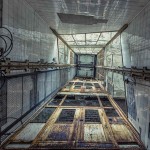 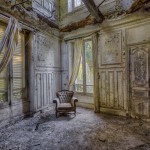 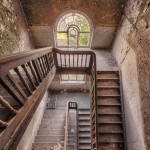 Well, when I first saw Christian’s work I had the hardest time finding him. But once I did he was super nice and happy enough to chat with me a bit about these amazing places and his gorgeous photos. Please note, I have edited Christian’s comments for clarity only – seeing as though Christian is a native German speaking guy, I just wanted to help him put his best foot forward for you all. For the record, if a German emailed me – in German – and asked for an interview I’d say no straight out. So kudos to you Christian! hahah. Anyway, here’s the quick conversation that we had together…

THinc. – The first, and most obvious question that HAS to be asked is… how do you find these locations?

Christian – It is a puzzle to find some of the places. I have had to visit a lot, and I mean a lot of buildings, in order to find a great place to take a photo. Over the years I have developed a whole network of friends who will occasionally help me.

THinc. – I would think that places like these would be very very hard to light. Do you bring lights? How do you shoot this locations so fantastically? Is there a ton of prep and logistics involved?

Christian – I shoot with a tripod. And I mostly shoot HDR images with 5 frames. And then afterwards, I do the main processing I do in lightroom.

THinc. –Are these places that you have gone hard to get into, and are there threats of getting caught involved

Christian – It’s risky here in Europe to visit these places. And yes, it’s also illegal to visit many of these places because the risk of accidents is very high.

THinc. – I recently read an article all about groups of people that consider themselves urban explorers – https://deviantleisure.wordpress.com/2015/09/21/urban-exploration-as-deviant-leisure/ – and they talk extensively about how what they are doing is necessary, in spite of the laws against it. Would you consider your work necessary as well?

Christian – I try to live by a few key principles – which are to not destroy anything and I also don’t share these places with the public in order to protect them from vandals and graffiti artists.

THinc. – Are there other photographers out there that you look up to and that push you to do more?

Christian – There are a group of photographers here in Europe. They do the same types of photography as I do, and they are all collectively inspired as a group to do these sorts of photos.   A lot of these places don’t exist anymore. Or they are very hard to get into.   All of these photos have taken over five years searching and traveling to capture them all.

Well thanks Christian for taking time out to chat with us about your amazing photos and your fascinating work. We will definitely keep an eye on your work and definitely check in from time to time.