Holy. Moses. In. A. Convertable.

Let me come in again. 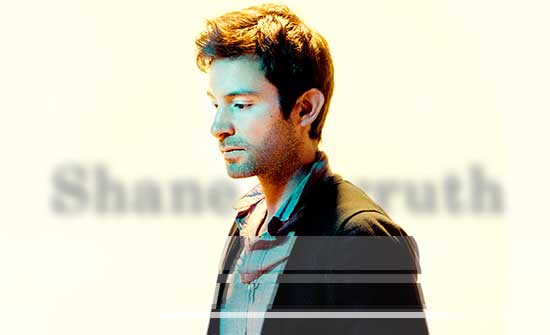 Nope. That was the perfect start. HOLY MOSES IN A CONVERTABLE. So, The American Film Market began out in Santa Monica today. And it launched, out of the gates with enormous news about Shane Carruth’s new upcoming film The Modern Ocean. Please, if you don’t know who Carruth is, see this. Or this. But more importantly, just go watch Primer. Or Upstream Color. But be prepared to have your movie watching world upended. #becausecarruth. Let me lay some truth on you. Christopher Nolan is the second greatest movie auteur… behind Carruth. Yeah, I just did that. Now you understand where I am coming from here.

But here’s the thing. Carruth directs himself. And other no name actors. Some of them have gone on to do cool things. But generally speaking Carruth works with nobodies, because he makes his moves for THOUSANDS of dollars… and when I say thousands, think 6 or 10. Not hundreds. And definitely not millions. So this latest news is crazy big in the land of the Carruth. (That would be an über name for a Shane Carruth fansite… The Land of the Carruth. And who knew? It’s available. If only this website didn’t send me into apoplectic shock just thinking about it.)

So what is this crazy big news in the land of the Carruth? Well, it would seem that The American Film Market (AFM) began today in Santa Monica, California, and one of the first announcements out of the gate was casting for his upcoming feature The Modern Ocean. And this is no list of B-list unknowns.  So who are they?  The final list holds not only Anne Hathaway, Keanu Reeves, and Daniel Radcliffe, but also Chloe Grace Moretz, Tom Holland, Asa Butterfield, Abraham Attah, and Jeff Goldblum. I mean, if that’s not a Christopher Nolan type draw A-List, I don’t know what is. And obviously, Carruth star as well. For which, I am really thankful. His movies aren’t his without him.

And even the movies that aren’t his, with him in it aren’t any good without him! hahah. Have you guys seen, Everything, Everything and Everything? I was lucky enough to get in on Alberto Roldán’s – director of Everything – and convince him to let me see his amazing little movie with Carruth in it. But the take away from that movie was a big one. Because that was the moment Carruth went from a Director that acts in his movies, to an actual actor. He was able to separate the two and show that he can just act. With that, I’m pretty stoked about Carruth’s upcoming movie, and knowing that he will be in it.

If I have reservations, it is that Carruth has money. I’ll get to that in a second. But he has been backed by WME, which will help him pull this monster of a movie together. And also, Lawrence Inglee’s Blackbird will produce it alongside Carruth, in partnership with financier Gideon Tadmor. Did you catch all those names? Whether you know who they are or not.

That is crazy. He did the score. And he shot the movie. And … EVERYTHING. So to have him go from being a one man shop, over to having tons of money to make his fullon vision is going to be a big big change. And many are gnashing their teeth about this change. But you know what… if anyone can do it, Carruth can. He has been hoping for this particular moment for years and years. He went looking for funding for A Topiary, (which, is a really amazing script by the way) and was just beaten to death by good feelings, but zero yeses. And now, not only does he have his yeses, and his money, but he also has a Nolan-esque actor list.

If you haven’t heard me talk about what The Modern Ocean is going to be about, it is basically set in and around cargo ships and trading, delving into the competition for shipping routes and valuable materials, set on land and at sea, that will culminate in an epic battle. It isn’t about pirates and that sort of thing. But it is about autonomy, and international maritime law, and about rights, and how we are all interconnected in a global fashion now a days. I’m certain that, although the cast is enormous, and the budgets will undoubtably be big, I’m sure that Carruth will be very careful to keep the intimacy of his past movies front and center. I mean, why else would Hathaway sign on? Everyone knows what Carruth is capable of. The tension the chaos, but his intimacy as a director is what makes him stand head and shoulders above other directors and film makers.

Carruth mentioned in the past that this film will need to be shot in the summer. I had been hoping that they shot this past summer, so that we would be all the closer to seeing his vision for this movie. But, now that I know that the cast has only just been selected, they’ll most likely be in pre-production right now, and shooting next summer. So we’ll most likely have The Modern Ocean in theaters by the summer of 2017? Just a guess. No one is talking about release dates yet. But it would logically follow. But here’s hoping that Carruth knocks this one out of the park. I do think that if the script is right, he would be an Oscar candidate in a number of slots with this movie. Cinematography, Writing, Directing for sure. Doubt he’d be up for an acting Oscar. Although, I’d be tickled pink for him if he were. Pretty exciting stuff really. You go Carruth!!

And by the way, if anyone has access to Mr. Carruth… I’ve been dying to get these questions in front of him for a couple years now. I was lucky enough to know that Alberto Roldán put them in front of him once. But didn’t even get a nibble. Or heck. A phone call would work! hahaha. He definitely is the one White Unicorn I’ve never been fast enough to snag. Regardless, I’m really hoping that The Modern Ocean turns out to be Carruth’s defining moment in Hollywood.