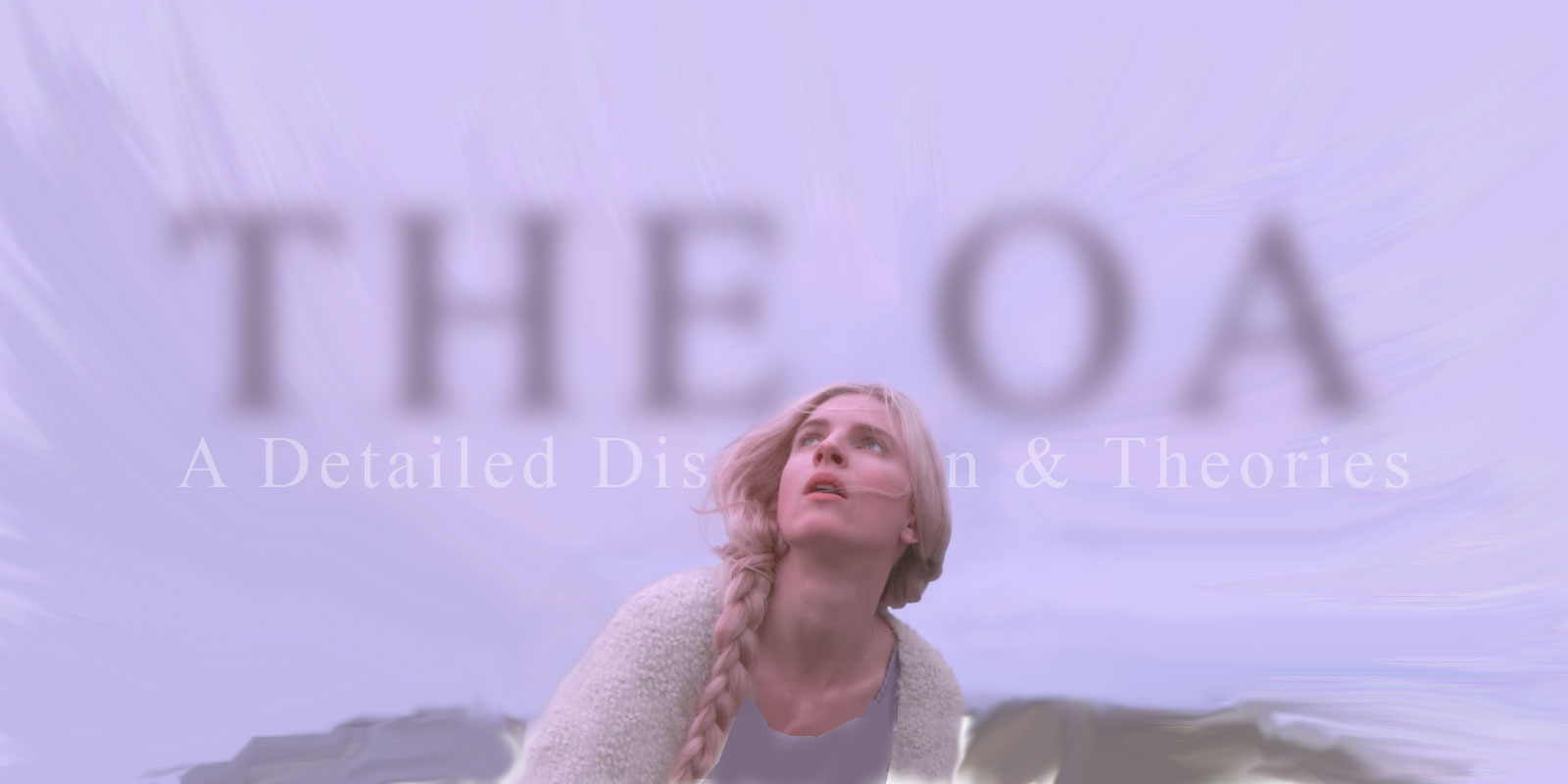 The OA Episode 1 Theories and Explanations

I keep saying that this TV show that I am talking about right now is the exception. But it seems like I’m saying that so often that I just have to stop. Apparently TV is the new Cinema. I really mean that. True Detective season 1 – most amazing TV ever. Westworld – most amazing TV ever. Peaky Blinders – most amazing TV ever. And now, the OA? What is going on here? Normally, I find crazy smart cinema scratches my itch for great entertainment. Movies like Containment, The Invitation, If There’s A Hell Below, Exam, Arrival, and the like. But when Netflix surprised us all with a fantastic Christmas gift of a totally new series that no one knew was coming? With a crazy cool premise that was executive produced by Brad Pitt (who also produced World War Z and other great winners in my mind.) You have got to dig deeper and see what is going on here.

As I have done with Westworld, I plan to walk through every episode of The OA and discuss my thoughts and theories as they come to me. I have avoided watching anything beyond the episode I am currently reviewing so that I won’t be swayed in my theories or ideas. So each episode, I plan to do a quick walkthrough of what happened, and then talk through the theories and possibilities of what is happening at that point in time. Right?! Make sense? Great. Then let’s dive in with Episode One of Season One of Netflix’s new surprise TV show The OA!

The season of The OA launches with possibly one of the best kick offs of any show I have ever seen. Actually reminds me of the launch of Orphan Black when the woman (Can’t remember which one that was) neatly piles her things on the station platform of the subway station, and then steps in front of a train. Right? Well the OA kicks off with Prairie, or Nina, or The OA (more on that later I am certain) stepping out onto the edge of a bridge, and then jumping off. What a compelling intro – made me go, “Oh snap. Oh snap. Oh snap.” Because until that moment, I was completely sure if this series was for me.

And the story continues in the hospital after Prairie wakes up, feet battered and bruised, having survived the fall quite miraculously. “Did I flatline?” No you survived. “Did you see the ambulance logs?”

That seems important. What the heck? My first thought upon hearing that quote was, “Is this totally a Flatliners sequel in the making? Is this something involving death and

And then she says, “We all died more times than I can count.” There is some deep deep story going on here. And then Prairie’s mother and father see the YouTube clip and haul it to the hospital to see her again. And then it’s Prairie’s quote… “Who are these people…” sets the stage for an enormous revelation. Before she disappeared, Prairie was blind. But now? She can see, and she had never seen the faces for her parents.

We get whiffs of a man named Homer and Prairie’s need to validate the fact that she didn’t make him up. We start to understand that this story of her’s, her story isn’t over. It was still happening. And yet, the only thing the news, and her family, and her friends want to know? Is what had already happened. How was she abducted? How did she get her eyesight back? But the interesting story may actually be where she is going and what is next in her story.

And then the episode begins assembling a ragtag group of the five that the OA needs for some reason. Is it a ritual? “You need to leave your door open so I can be invited in.” (Which, is rule number one of all horror flicks. The evil has to be invited in. It must be allowed to cross the threshold. Is it possible that The OA is evil? Could it be that we see her as benevolent when in fact she isn’t? Hrm. Just thinking outloud here.) and with that quote we see her assembling her five through the interactions at the local school, the teachers, and the parents within the community.

And somewhere in the middle of all of that Prairie says, “I need to see you Homer so I know I didn’t make you up. I didn’t leave you behind.” What is that about? Who is Homer? Why does she think she didn’t leave him behind? WHAT IS GOING ON IN THIS SHOW?!? And then Prairie, while talking to Steve, tells him, “You don’t want to go there until your invisible self is more developed anyway. You know, your longing, things you tell no one else about?”  This woman talks like no one else. She is focusing on the invisible self? Which, I love! But WHAT?!? And then there was that section where she tells him to spend time closing his eyes and she speaks to him like she knows he is trying it unsuccessfully? Prairie has me completely and totally curious as to what is going on here.

“I need to cross a border that’s hard to define.”

And then the show heads off to Russia to start telling Nina’s story (or Prairie’s, or The OA’s… or whomever’s) and that of her father. Apparently there was a Russian mafia group called the Voi (only way I figured out the spelling was through turning on Closed Captioning) which attacked the students of the rich and well placed of Russian society. Nina’s bus went off a bridge and went into the water. And even though Nina was able to swim out from within the bus, she still died. And yet, came back from the dead. The only catch? She lost her eyesight in the attack.

Oh my gosh, this thing can go anywhere. Like all kinds of everywhere! We have no idea how Prairie was abducted. We have no idea who Prairie even is. Is she a prophet? Is she an alien? Is this sort of a Midnight Special scenario? I just don’t know. But here’s what we do know at this point:

A few theories immediately come to mind as I have just finished Ep.1 and they are just bouncing around my head like popcorn. Some I hint at in the facts above. But let’s just tear into a few shall we? And I will definitely be going back through them and seeing how right I was at the end.

You guys have all seen Flatliners, right? Puhlease tell me you’ve all see Flatliners. Yes… it’s old. And yes, it had Kiefer Sutherland, and Julia Roberts. And yes it was a truly “popular” film back in the day. But, DANG was that a good movie. Ok, for those of you who know nothing about it, the basics are simple. A group of medical students want to know if their is anything beyond death, and so they start stopping each other’s hearts and waiting longer and longer and longer to bring each other back. So long in fact that their friendships, and sanity begin to strain. Oh, and by the way, they may have brought things back with them from the dead as well. As in, past pains, relationships, and hells. Thus the thriller bit kicks off in earnest.

So if that is our baseline for this theory, how does that have anything to do with The OA? Well, as we mentioned above, there definitely is a lot of evidence that there is some group of people that somehow communicate or crossover to some other place by flatlining. (Prairie’s words, not mine.) Right? That’s why she jumped. That’s what her goal was, no? To find out where Homer was. To find out if she had made him up? Right? So I think that as the season progresses, we are going to see a group of a cult, or of a scientific mindset that flatline each other in an attempt to get to this place, or awakened state. Or what have you.

This theory just assumes that everything about the Voi and about Nina’s father’s mafia connections was correct. That there was some sort of extreme hunt for Nina’s father. And that Nina’s father was important in more than one way. For example, the Voi. The Voi? The OA? The OiVey? Ok, bad. But what is this Voi? and why exactly is Nina’s father so freaking weird? Seriously, make your daughter go climb in a frozen lake when she expresses a fear or a concern? Was he some sort of mentalist? Or some sort of spiritualist? Maybe everything in the OA heads all the way back to Nina’s still alive father. Oh wait, is that not a thing either? hahaha.

The OA Theory #3 – Homer is Pulling the Strings

What if, Homer is mental fellow, that has just weezeled his way into Prairie’s head somewhere along the line? Maybe he is the one that seduced her into leaving her home? Maybe it’s Homer that has totally enmeshed himself (for unknown causes) into Prairie’s life. What if it’s like how Natalie got into Leonard’s life in the movie Memento? No no no. More like how Teddy used Leonard for his own purposes… over and over again. Maybe Homer is utilizing Prairie’s mind (which we already know was susceptible to craziness early on) for his own selfish purposes?

The OA Theory #4 – Psychosis In the Extreme

And the final possibility, knowing what I know now, is that Prairie is just completely and totally mental. This is all just a made up string of crazy events in the mind of one insane person’s head. Maybe she just walked away from home on her own. Maybe she got into various troubles and chaoses by just being open and susceptible to the insanity of the world. I actually believe this one a lot, and no matter what really happens, we will always wonder if it really is just Prairie being insane. Because a good show, a really great movie, always balances our ideas of what is happening on the knife’s edge of some outlandish theory and that of another… like her insanity.

Overall Thoughts on The OA

I’m intrigued, and enthralled. I’m curious who Prairie is. Who Nina is. Why Prairie seems so mental. And what her story is all about. I love shows that ask questions and force you to think through the alternatives. I enjoy TV producers that think through an idea through to the end and then give us a coherent view that lays out the story that heads towards this goal and destination. Westworld is a perfect example of that. The OA looks to be a lot of fun. And truth be told, I am enjoying stopping and thinking about each episode before racing on to the next morsel. Thanks again Netflix!!