Sometimes, I am my best dataset for studying and investigation. And recently I kept notes, and followed my own creative process from beginning to end, well, “end” as in – completed idea. I sometimes just get overwhelmed with the passion and desire to create something new. Develop something different. Yesterday I had two ideas for an iPhone app that won’t come to anything I’m sure. But I just sometimes get overwhelmed by the desire to invent… create… to something. And so this time I tracked the progress and the idea from beginning to end.

First, if you don’t know me at all, I can be a pretty intense person. I rarely half-ass anything. When I do something, I go all in, and do it. Until I get bored that is. But yeah, when I decide to go after something I pretty much burn the midnight oil, I do anything and everything necessary to get that thing done.

I remember reading the first Redwall book with my son and thinking… I get it. But, I really think I could do a better job of layering in more intrigue and writing better plots than this book is putting forward for my kids. And, so I did.

I think it might have been my first NaNoWriMo? And in a month I had the basic book done. Now, granted its definitely not better than Redwall. But, bottom line, I went from idea to execution in 12 hours. And thirty days later I had written a first cut at a 300 page book for my son.

So, about 2 months ago I had this really random idea. Which sounds even lamer said out loud. But here it is. “I’m going to do a massive Minecraft Build and I think there is art in here somewhere.” But first, have you guys played with Minecraft at all. Sure, your kids probably love it. Maybe you loved building huts and small houses and little communities. But have you considered doing a full tilt, massive Minecraft build before? Here, let me show you the kind of idea I was thinking about:

Literally… the build I was considering was the Neuschwanstein Castle build. But that was already built. So I went out and found it, downloaded the castle and ogled it some. It was pretty cool from the outside. There was something about it that I really dug. The 8-bit nature of the design. The algorithmic/math portion of it was fascinating to me. There were bells going off in here somewhere – but I just couldn’t add it all up right there and then.

Now, just to be clear, 8-bit art is a deep rooted portion of my childhood. One of my favorite games of all time is the Atari 2600 game Adventure. Too young? No idea what I’m talking about? Here. Just look at this video of the game:

And if you know anything about street art, Banksy, et al. then you have heard of Space Invader, who is making art in this vein 100%. All blocks and bits. Well, anyway, as I was playing with Minecraft I began playing around with the map’s sizes, messed with the avatars and art. Even added some complexity to this awesome little logic puzzle of a game. But nothing was really clicking per se. And practically speaking, I didn’t even know where I was going.

Now, let’s side note for a second… it’ll become relevant quickly, I promise. For a couple years now I have had fun playing with Google’s tool Sketchup. If you don’t know anything about Sketchup, it is a pretty user friendly CAD solution for mocking up three dimensional designs. It isn’t as complicated as AutoCad, or some of the professional solutions. But it allows you to move quickly (fairly quickly anyway) with the development of your idea. Here, let me show you kind of what is possible with sketchup. A couple months ago I created a new deck design for my house and compiled the deck and my house photo into a single image: 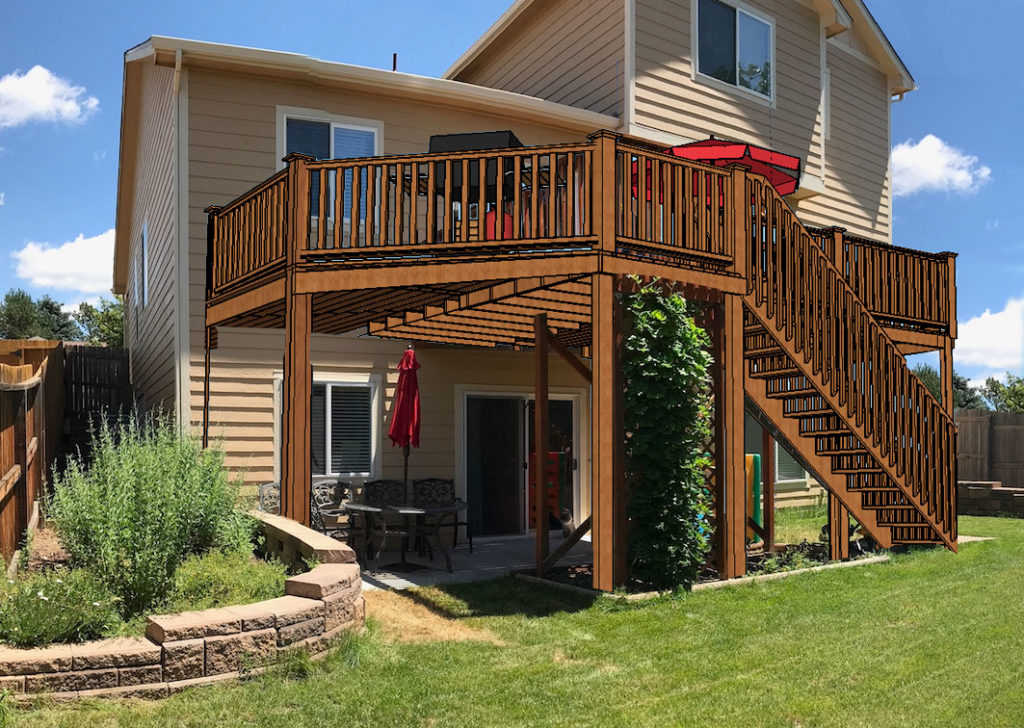 But that still left the bigger 8-bit art question still hanging in the breeze. I knew I wanted a digital component to this art thing, a low-fi version, if you will. So, I was sort of wandering through the desert of digital low-fi creation options. Minecraft is fantastic as a game, but could it hold up as a design tool? I wasn’t really seeing it work in practice. But if you want higher fidelity, and more true to life modeling, maybe something else would be better? Which is how my brain started considering Sketchup as a different alternative.

Sidebar number 2 (12?). There is a part of me that has got to emote creatively. To design and to sketch, to paint… to whatever. For example, right now, I am struggling with a tech problem in my job that I just can’t seem to get past. Should I take the problem on? Is it even possible? It’ll be a year at best to get it done… with no real end in sight after. But it could potentially support 5 other projects that are stuck currently with new and innovative ways to do things… right? And I find myself sketching as I grapple with the ideas. 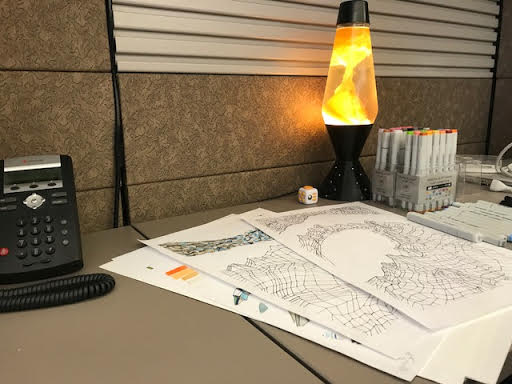 Notice the low def detail of the drawings. The lineness of the sketches. It’s a theme that is running through everything right now. I think I’ve told you guys about the new drawing solution that makes your drawings into 3d locations? Mental Canvas I believe it’s called. But that tool isn’t publicly available or I’d definitely be playing there. Tools like that just light up all my synapsis. Help with the creative practice… if you know what I mean.

Which brings me back to the question at hand. Creativity and artistic expression in a low-fi and low-bit amalgam of some sort. And that brings me back to Sketchup. So, I started learning how to program drawings inside of Sketchup. I began drawing lines programatically. Connecting lines automatically based on parameters of previously drawn lines. Which sort of reminded me of Ben Butler’s drawings – who I interviewed a year or so ago.

But instead, I was more interested in a more contour map view. Elevations and what not. So I began pulling triangles together, and connecting them via vertical lines down to the main plane of the world. Here, why don’t I just show you what I’m talking about? 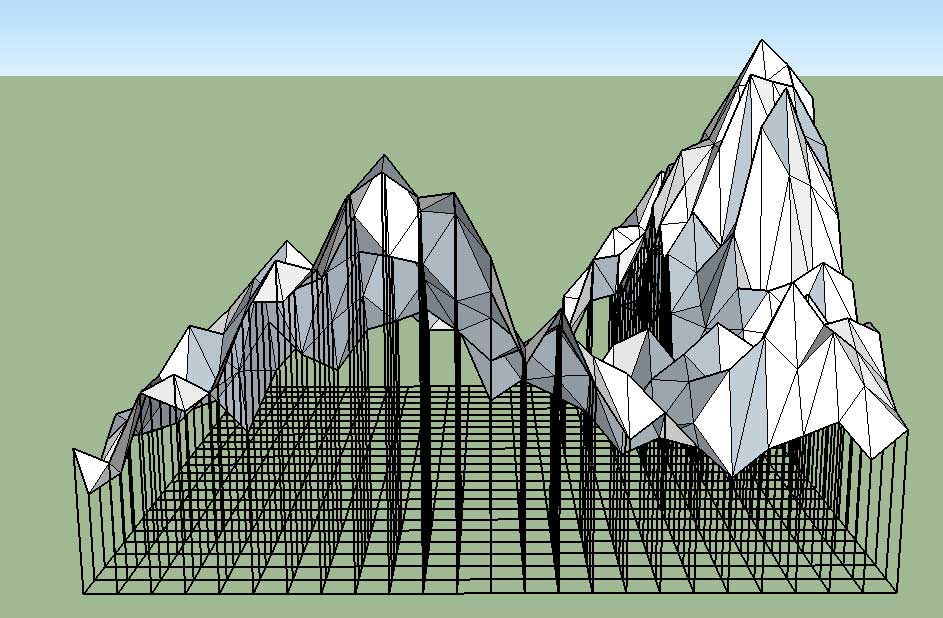 And those fiddlings started to take root. There was something there that I was really finding fascinating. I kept playing with the programming and the manual elevation creations to form new and different views of interesting scenes and vantage points. I even considered creating a program that would not only create the mountains, but animate them moving and undulating as they receive user feedback. But at the end of the day, I was really wanting a poster, or a print, or a wall piece so animation really didn’t make sense.

Then I had this eureka moment. Probably doesn’t sound all that eureka-ish. But to me it seemed pretty cool in light of the on going path I wandered from day one to present. And that was, what if the low-fidelity mountains interlaced with photos of real mountains? What if they were seamlessly integrated? Pixelated Permutations! hehe. Lame. I know. Anyway, what if it went something like this: 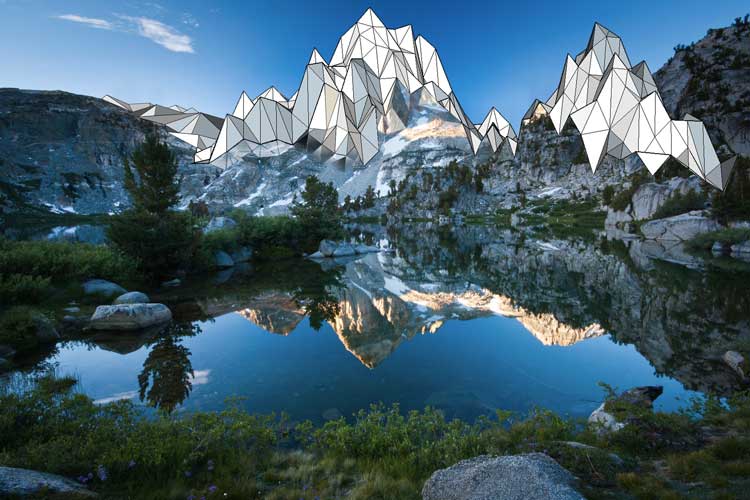 Still working on the best way to blend the pixels into the real surroundings. You can see I have been trying different versions and methods. I also would add the pixels to the lake reflections to carry the idea to the logical conclusion. I’m also considering dropping pixelated triangles in amongst the bottom of the foreground as well. But the larger idea is there. Right? We’ve gone from random Minecraft something, all the way out to pixelated mountain range. Now I take some of my high def photos of mountains here in the rockies and start playing with varying permutations of LOTS of pixels and just highlights of pixelation.

Next stop? My next gallery show! And you’ll all be invited as my personal guests.