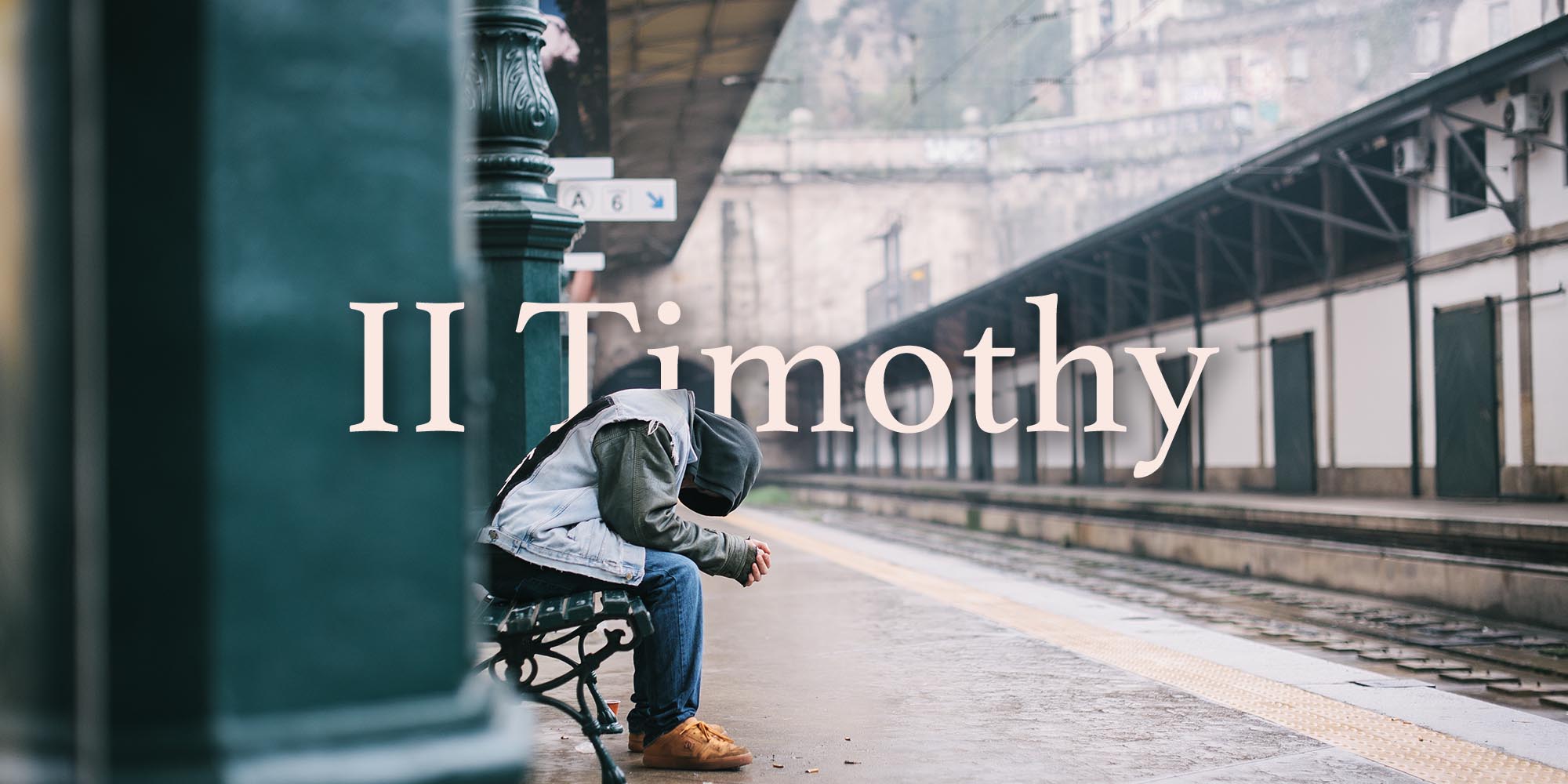 I’m diving directly into it for II Timothy. If you have zero idea what this is all bout, there are plenty of other posts to check in with, maybe try the post on I Timothy first? You can find it here.

The Second letter to Timothy finds Paul in a dark dungeon in Rome, writing to his long time friend and missionary journey partner Timothy. But today I’d like to open talking not about the Bible, but rather Nero, and secular perspectives on Christianity that have pervaded cultures, and philosophies from then until now. II Timothy was written by Paul in the the year 64 AD just before his death at the hands of Nero.

But why? What was going on that Nero decided to kill Paul, heck, why did he kill piles of Christians? Well, Nero, wanting to build a bigger and better city in a particular area of Rome, burnt down a large swath of the city. And after the fire raged for the better part of a week, and when the populous turned against him for this move, Nero decided that a scapegoat was probably a better idea. And so Tacitus, a Roman historian, recorded the details of the situation in the city. Here is a quote about the situation from his book, Annals XV.44.

“And so, to get rid of this rumor, Nero falsely accused the culprits and punished with the utmost refinement of cruelty a class hated for their abominations, who are commonly called Christians. Christus, from whom their name is derived, was executed at the hands of the procurator Pontius Pilate in the reign of Tiberius. Checked for a moment, this pernicious superstition again broke out, not only in Judea, the source of the evil, but even in Rome…. Accordingly, arrest was first made of those who confessed [to being Christians]; then, on their evidence, an immense multitude was convicted, not so much on the charge of arson as because of [their] hatred for the human race. Besides being put to death they were made to serve as objects of amusement; they were clothed in the hides of beasts and torn to death by dogs; others were crucified, others set on fire to serve to illuminate the night when daylight failed. Nero had thrown open his grounds for the display, and was putting on a show in the circus, where he mingled with the people in the dress of charioteer or drove about in his chariot. All this gave rise to a feeling of pity, even towards men whose guilt merited the most exemplary punishment; for it was felt that they were being destroyed not for the public good but to gratify the cruelty of an individual.”

They were wrapped in the hides of beasts and torn to death by dogs. They were used as illumination when daylight failed. They were used for show in the Circus. In short, Nero ducked behind the multitude of Christians in the city as he tortured and murdered them for sport. But the public sentiment backfired on Nero. Why? Because it was clear that all this was for the amusement of one man obvious looking for a scapegoat.

In Paul’s second letter to Timothy he had had at least one winter, and had suffered greatly from the cold. He comments that really doesn’t want to spend another winter in the Mamertin Prison. See II Timothy 4:13 & 21, where he asks Timothy to bring him his cloak, and also begs him to come before the winter hits again. We aren’t sure what his charges are against Rome at this point, but they most likely include crimes against the burning of Rome. Informers had to have been turning Christians in left and right. And proof? Who needed proof when Nero himself was attempting to duck his own crime against his own city.

And we know from the book of Hebrews that Timothy did come. He left his church in Ephesus, and delivered his friend the cloak and the parchments that Paul had asked for. And what came of his helpfulness to his brother? Well, in chapter 13, verse 23, it is asked that they check in and see that Timothy was released. Which means he was captured as a result. As opposed to Paul, he was released. We know this because the book, The Apocryphal Acts of Timothy state that in the year 97 (30 plus years later) that the 80 year old pastor attempted to stop a procession to honor the goddess Diana by preaching the good news of the gospel. But those in the procession were none to happy about his sharing of the truth and they decided to drag him through the streets and beat him. And then they stoned him to death.

Back to Paul though? Right. Sorry. Secular accounts have it that Paul was killed in 68 AD just a few months before Nero committed suicide. Christian tradition has his death closer to 64 AD and the burning of Rome. Either way… he died of beheading. He was not crucified because it was illegal for Romans to be killed in such a demeaning manner. And so, on the Ostian road, only just outside Rome, he was beheaded. Paul’s best benediction are his own in II Timothy 4:6-8:

“For I am already being poured out as a drink offering, and the time of my departure has come. I have fought the good fight, I have finished the course, I have kept the faith; in the future there is laid up for me the crown of righteousness, which the Lord, the righteous Judge, will award to me on that day; and not only to me, but also to all who have loved His appearing.”

But it’s obvious both from secular accounts and Christian accounts that Paul, Timothy, heck, all of the multitudes of Christians lighting Nero’s gardens, and entertaining the masses in the Circuses that all the Christians had to do to avoid this humiliation and dismemberment was to proclaim Caesar as Lord and the dogs (metaphorically and literally) would have been instantly called off. And yet, instead they doubled down on their beliefs in those moments of trial.

The Purpose of Paul’s Suffering

I have chatted with many readers of this site who take issue with my attitude of willingly going to my death if challenged for my belief. Such a funny thing to be challenged on… seeing as though it is the only True thing in my life. True with a capital T. The only real, absolute thing, if you catch my meaning. Here, Paul alludes here to the purpose of this ordeal that he was going through:

“Remember Jesus Christ, risen from the dead, descendant of David, according to my gospel, for which I suffer hardship even to imprisonment as a criminal; but the word of God is not imprisoned. For this reason I endure all things for the sake of those who are chosen, so that they also may obtain the salvation which is in Christ Jesus and with it eternal glory.”

He is calling the readers of his letters to remember the one and only important thing. And that is Jesus Christ, descendent of David – as it was foretold – to remember his rising from the dead, remember Him, the only thing that matters. Oh and by the way? Paul suffered multitudes of hardships for this ascendant Christ. (He numerated them for us elsewhere. Stonings, whippings, shipwrecks, lots and lots of bad.) But why? Paul endured in order to tell the story, Paul endured in order to be a testimony to the truth, that others that collided with him (prison guards, Roman Emporers, everyone that Paul interacted with) would know.

During this period Nero hated Christians. Now it may only have been a front to blame them for the burning of Rome. But we know that Nero saw Christian’s as a challenge to his god-ness. A challenge to his deity. Which, I can’t fathom. To think of a President of the United States calling themselves a god to be worshipped? And all those who did not were up for crucifixion? I’d probably first in line to call out that the Emperor has no clothes on. Literally. Even if that meant my violent death. But that wasn’t why Paul was choosing to die, he wasn’t trying to call out Nero. He was testifying to the greatness of God, and our salvation through Christ, not the insanity of Nero. So I guess my getting in line would be ill-informed! hahah.

The Aroma of Christ…

Which brings me to my point for this book (yes, I haven’t really covered the book at all, but more so the fate of Paul and Timothy themselves.) and that is the aroma of Christ. To some, this absolute certainty, this 100% all in-ness of Paul, and all of the early church leaders, is so so compelling. For me, it fixes my faith, and I align with them in solidarity to the Goodness of God. Regardless of what befalls me in this life. I testify to the Goodness of God. But to others? This aroma is the smell of death. Here is Paul mentioning this in 2nd Corinthians:

“But thanks be to God, who always leads us in triumph in Christ, and manifests through us the sweet aroma of the knowledge of Him in every place. For we are a fragrance of Christ to God among those who are being saved and among those who are perishing; to the one an aroma from death to death, to the other an aroma from life to life. And who is adequate for these things? For we are not like many, Or peddling the word of God, but as from sincerity, but as from God, we speak in Christ in the sight of God.”

If there is just one of you out there that is finding themselves reading this, and you don’t personally believe God exists, or that He sent his son to die for you… hear this. This moment? Right now? God is calling you to Himself. I promise you. Why do I know? Because He would have none perish. I would have all draw close to Him. But you have a choice here as to the aroma this post has. It is either sheer insanity, and death. Or it is true Life. One or the other. My prayer for you is that it would be the first step towards Life in Christ. That you would see the conviction of the early church leaders and you would come to know God for who He really is.

There are many segments of the church today that gets it 100% wrong. The church seems to have sold out to power, to politics, to esteem. That is the visible church that just seems to be getting it wrong more often than not. But then there is an underground church that doesn’t care about power. Doesn’t care about Republicans or Democrats. There is an underground church that only cares about the widow. Cares about the orphan. Cares about the impoverished. There is a church out there the is desperate to save and adopt those without parents. To give a hand out to those slipping and falling. To the homeless. And that is the church I believe in. The church that is desperately trying to tell you about a God that loves you. A church that loves you for who you are. Whether you are a drug addict, a killer, whether you are a victim, whether you have had serial affairs, whether you have harmed those near you, whether you are alone, suicidal. Whatever. I love you. God loves you for who you are. But it all begins and ends with the aroma of Christ.

If you’d like to talk more about this craziness. I’m always available. Give me a shoutout.