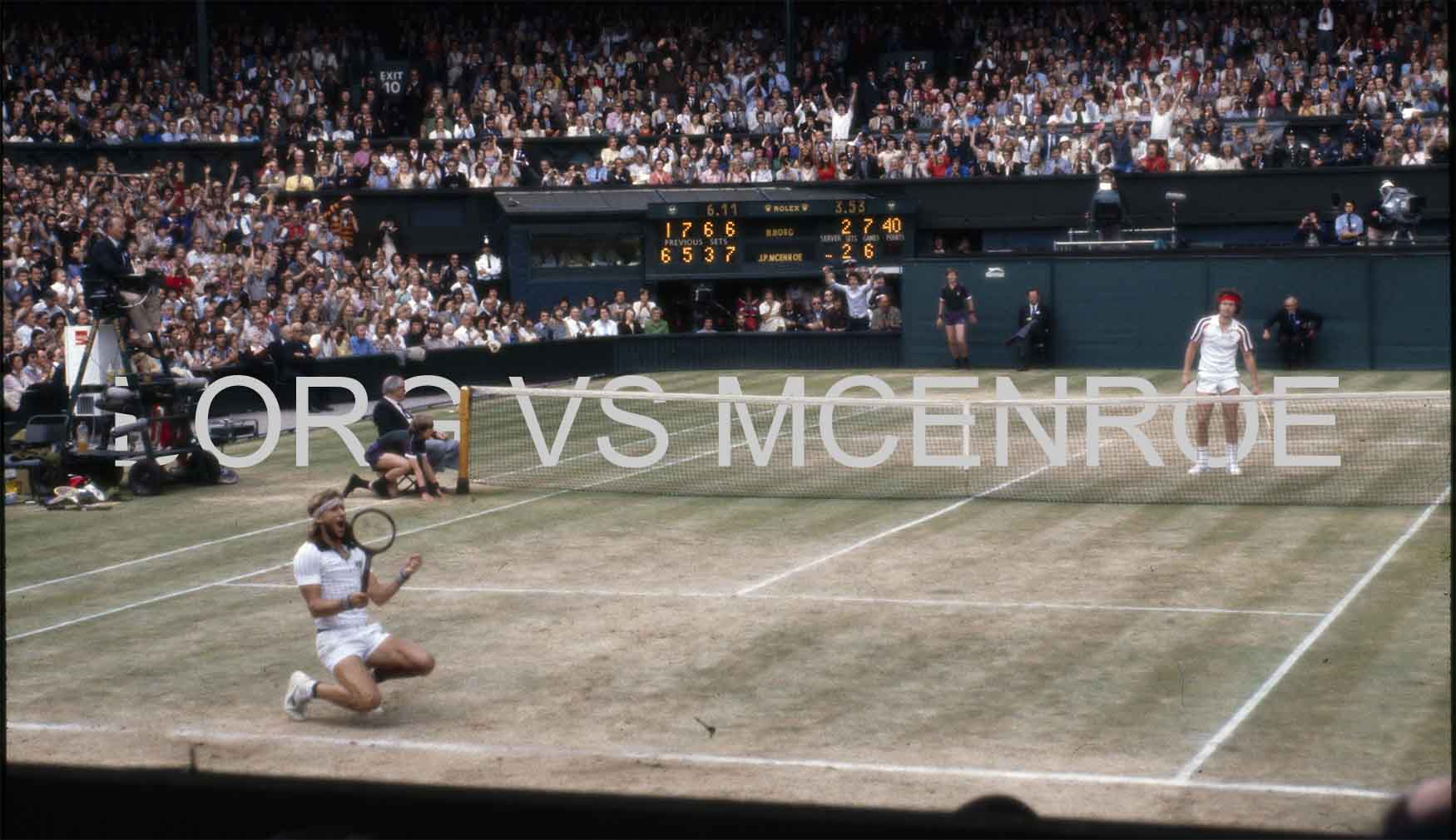 Borg Vs McEnroe is a movie for thinking sports fans

Taylor Holmes
cinema
June 12, 2018
Borg Vs McEnroe is a movie for thinking sports fans - or how I realized that not all sports movies are as bad as all sports movies. Movies like I, Tonya & Borg vs. McEnroe open the door to a totally different kind of non-bad sports movie.
Screenplay
Editing
Characters
Action
Acting
Reader Rating0 Votes
4

Borg Vs McEnroe is a Movie for Thinking Sports Fans

I don’t normally dig sports movies. There are a million reasons why. But here in America we have one formula for sports movies, and that was created by Rocky. Underdog, disrespected, and the runt of the sport, fails. Always starts with an embarrassing failure.  But then they have to fight, scrap and kick their way to the pinnacle and only to just barely overcome. That’s the story of every dang sports movie. And I generally disdain them because by minute 2 it’s obvious where it’s going. HECK, by the time you see the trailer it’s over. You already know exactly what’s going to happen. Completely and totally.

Please don’t get me wrong. I love football. I absolutely love baseball. Tour de France? Futbol. Sure. Count me in. But try and make a movie about it? That’s intriguing or even just interesting? You got the wrong guy. I am literally not interested.

And so it’s kinda strange that while on my last flight, that I picked Borg vs. McEnroe to watch. But you know what did it for me? What convinced me? Shia LaBeouf. Since he melted down? I am totally intrigued by his every move. The other thing? I dated a gal, years ago, who was into tennis in a big way, and I credit her with my interest in tennis. But years ago I began watching all the majors each year. And I even went way out of my way to get out to Wimbledon twice. Well, “Way” out of my way is a little more than I intended. I was broke and in college while in England. I had to make a decision between eating for 36 hours and getting a day pass to the warm ups and a couple off center stage matches. I obviously went with Wimbledon. Duh. Two days later I was able to buy a loaf of bread and a liter of water! hahaha. But duh! Wimbledon! (I made a similar stupid decision to see Depeche Mode play in London. But that’s a different story for a different day.) 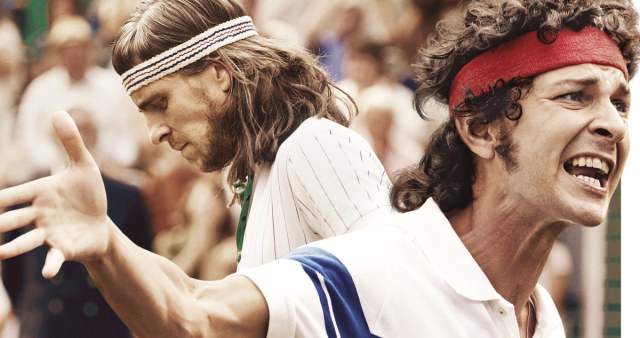 So yeah, I have a pretty deep, and ingrained love for tennis. But the thing that truly transformed my love for the sport was this piece by David Foster Wallace – Roger Federer as Religious Experience. Now, please understand this… David Foster Wallace was the greatest author to have ever lived, and I will not put up with you arguing with me on this point. Don’t even start. No really. And while you may think Infinite Jest is just hype and young intellectuals navel gazing, fine. (I disagree, but whatever.) But Wallace’s journalism pieces are just mind blowingly good. And what makes this article so fantastic is that Wallace actually attended a tennis academy and chased the brass ring of tennis for a period of his life. So he knows this topic inside and out. Like, just look at this opening para. It’s literary gold:

“Almost anyone who loves tennis and follows the men’s tour on television has, over the last few years, had what might be termed Federer Moments. These are times, as you watch the young Swiss play, when the jaw drops and eyes protrude and sounds are made that bring spouses in from other rooms to see if you’re O.K.” and then a second or two later after setting up a moment Wallace says this, “given Agassi’s position and world-class quickness, Federer had to send that ball down a two-inch pipe of space in order to pass him, which he did, moving backwards, with no setup time and none of his weight behind the shot. It was impossible. It was like something out of “The Matrix.” I don’t know what-all sounds were involved, but my spouse says she hurried in and there was popcorn all over the couch and I was down on one knee and my eyeballs looked like novelty-shop eyeballs.”

Such great writing about a beautiful sport between two humans. So yeah, that is my personal background when I found myself bored on a flight that was filled with Teenage Mutant Ninja Turtles movies and other horrors. And when I saw that Borg vs. McEnroe in the list I thought, heck, it’ll be interesting background noise if nothing else. But I was wrong. The movie was a compelling psychological narrative. It was a really well done study in personas and the expectations of social systems. It was, in a word, anything BUT a sports movie. There was no underdog strives to comeback, to overcome. There was no Rocky music. This was not a sports movie. It was a psychotherapeuticnarrative. To steal from this German tendency to coin a phrase.

Normally at this point of the movie review I ask those of you that haven’t seen the movie to depart and we discuss the deep inner workings of the movie. Well, this movie really doesn’t need that. There isn’t really much that is confusing here. It just is. So if you don’t want anything to be ruined, you might want to leave. But as this is historic fact, and just a newer, retelling of what happened and the inner workings of the men involved, if you know nothing of Borg or of McEnroe (um, where have you been?) then sure, you may want to avoid this bit and just go see the movie.

But what really caught me off guard was how just how deep the move was able to go into the psychological inner workings of Borg and of McEnroe without pandering or being truly obvious and heavy handed about it. The movie was a very quiet reflection on the demands of celebrities and the expectations we place on people we expect a lot from. I even caught myself wondering if celebrity should even be legal. It seems like such a blatant form of abuse. Sure, we shower them with riches as a result of their skill and prowess. But is it worth it? It’s such a fantasticly heavy handed psychological tragedy that we pound famous people for.

You can sing. Therefore, you are not human anymore, but a commodity and a sellable product. Which then diminishes you to the point of all but prostitution. Shocked me really. And, what’s funny is, that that isn’t even what this movie is about. 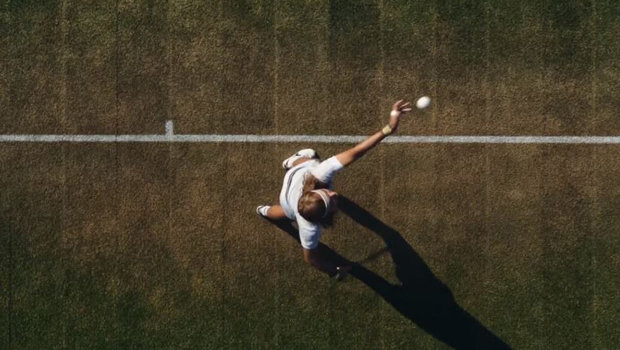 The movie starts with Borg. A young middle of the road tennis player with an atrocious temper. And it is a character study into the pressures of the gentlemanly sport of tennis colliding with this young player. And how this sport not only changed Borg from the inside out, but it also forced him to be someone that he wasn’t anymore to succeed. You then take the counterpoint of John McEnroe and point these two heat seeking missiles at one another and we have the perfect conditions for a tragic accident. Apply water, shake, and see what chemical reaction happens next!

So McEnroe is a Borg from years prior. A tyrant on the court. Basically I, Tonya, retold not on the ice but on the tennis court. (Which was another unbelievable sports movie that wasn’t a sports movie at all, now that I think about it.) But Borg was told to shut it off, and McEnroe never did. He is the freight train of hate and vitriol rolling straight at Borg. And so it is 100% fear. Of what? OF HIMSELF! Not McEnroe, but himself. And so this movie really did a wonderful job of unpacking this mental mind game. Spinning not McEnroe around but Borg. It was totally an investigation into Borg’s psyche and his mental ability to cope with the stressors and chaos of his on mind that was so fascinating to watch here.

And at the end, when the movie doesn’t go the direction you think it will… but instead exults in both of these characters and the changes that happen as a result of their colliding with one another, it truly was interesting to watch.

If I had one critique of the film at all, it would definitely be that the magical art of the tennis, the shots on the court themselves never really lived up to the hype that the movie built towards. And yet? This movie was not a movie about tennis at all. Tennis was a subtext. Tennis was a coincidence. The true movie was in Borg’s head, and the writer and the director did a marvelous job of illuminating this aspect of the story. And so my critique really falls apart under its own weight. 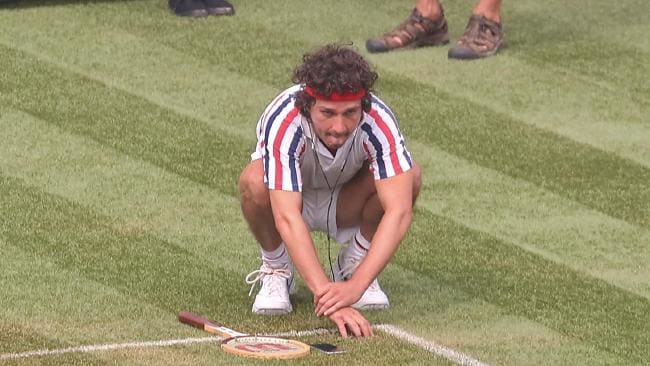 Obviously not everyone is going to enjoy this movie. And the fact that it didn’t follow the standard sports movie script is going to hurt itself with the wider audiences. But it is these bigger decisions that made the movie fascinating to me. Made these two characters come alive to my mind. And heck, not only was Shia fantastic here, but so was Sverrir Gudnason as Borg. Both delivered rich and multi-layered performances. Obviously wasn’t the best movie I’ve ever seen but I found it really refreshing and surprisingly good. I don’t know, what did you guys think of it? Did you find it passable?

Well, currently sitting at gate C35 at DFW about to get onto another plane and I’m pretty curious if there will be another fascinating movie surprise on the plane waiting for me. But I doubt it. We will see.