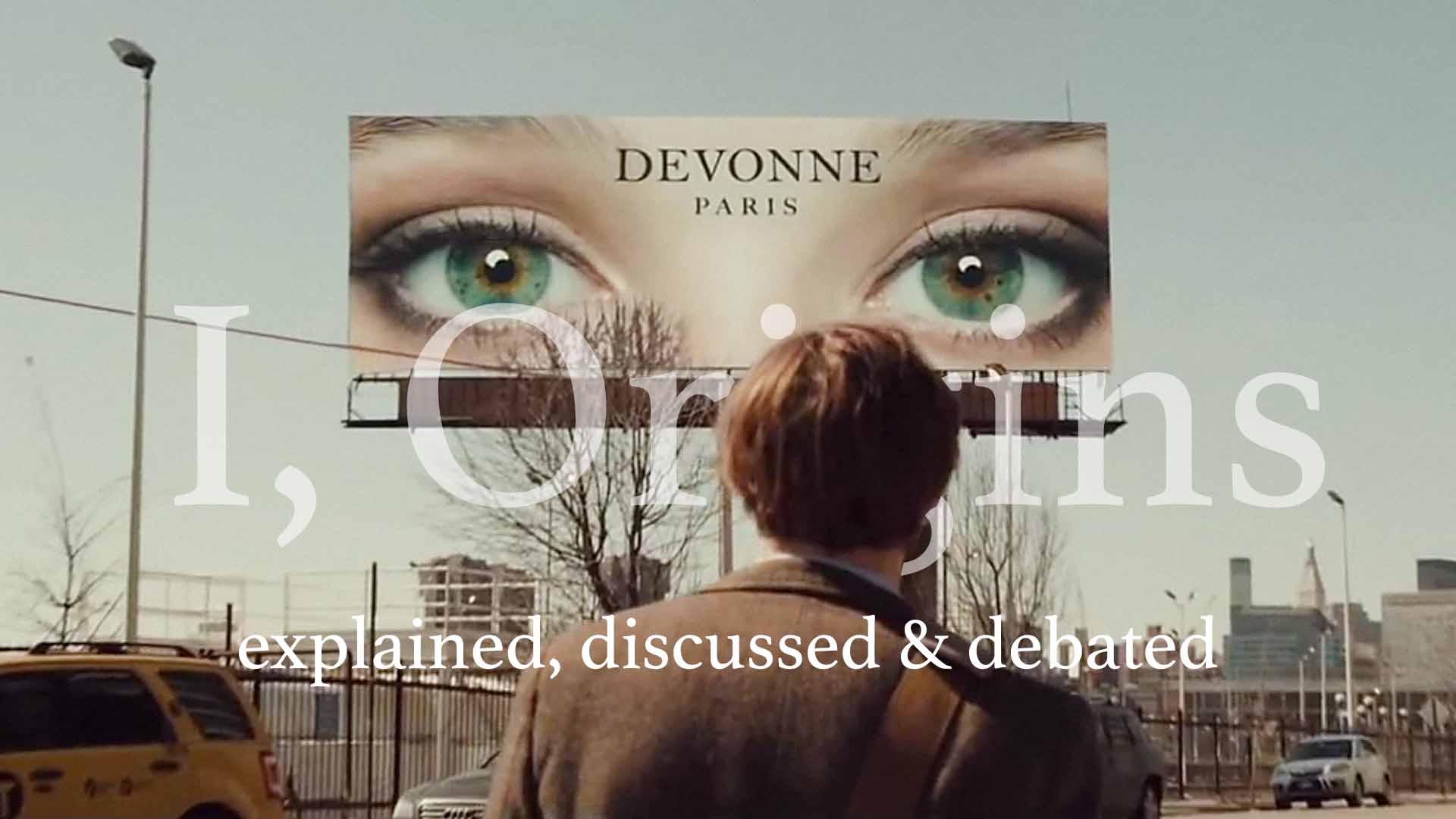 Shall I Explain Why I Origins is Delightfully Complicated

And by strong female characters, I am not meaning the Black Widow from the Avengers. I’m talking about compelling, plot driving, motivators for the purpose and intentions of the movie. You know? 90% of movies rely on men to discover things, move things, make things happen. But to see a movie where the female lead is given the opportunity to drive the movie’s action? That is enticing. And mainly because it is real. To relegate women to window dressing? Just smacks of inauthenticity. It’s not the world that I come from or know.  Watch I Origins online:

Which brings me to Brit Marling, upon which the entirety of I, Origins hangs, even if she didn’t happen to write this particular screenplay. She is one of the very few women making movies today that are wickedly smart, surprisingly self assured, and most definitely not window dressing. Though, beautiful. I recently walked through the entire first season of The OA and adored every minute of it. (Quick shout out to Brit, if you happen to see this, I would gladly trade an interview with Christopher Nolan for an interview with you!)

And as we (speaking in the third person plural) always do here, from here on out will be spoiler landmine after spoiler landmine. Why? Because “we” built THiNC. mainly to discuss, argue, explain, complicated movies that may not be completely understood. I mean that more for me than you. Many times, I explain a movie, only to have whole new avenues of understanding open up through debate and discussion in the comments. So yeah, from here on out…

From here on out, HERE BE SPOILERS – if you haven’t seen it yet, please consider watching I, Origins from right here, which will help support THiNC. continue creating discussions about fantastic movies.

The wanderings of I, Origin probably seem almost random at first glance. But the initial wickets that we head through are critical to the ending, and also to the epiphany Ian has at the movies conclusion. So trust me here as we whip through the basic structure of the film’s arc.

Ian and Karen hit it off upon first meeting. Their shared love for scientific truth and learning spurns them on as they try and find an answer to Intelligent Design proponent’s chief argument against evolution – which is that of irreducible complexity, and the eye. If you are unfamiliar with the argument, basically the argument goes – that if a thing requires 12 things to work, and no less (thus the irreducible complexity bit), then it’d be statistically impossible to accidentally create an eye. Right? So, Karen and Ian begin searching for a blind host in which to form a basic eye from scratch. Thus, they will be able to argue that the argument is irrelevant (which, doesn’t logically hold water, but that is beside the point).

Meanwhile, Ian sees a set of eyes on a billboard, and is enthralled. He’s determined to track her down and finally does while at a party. Her name is Sofi, and the two hit it off immediately. And they go so far as to even almost get married (there’s a 24 hour waiting period, duh.) But on their way back to Sofi’s apartment, the elevator fails, and in the process, ends up killing Sofi. And in a classic grief-rebound of epic proportions, Ian and Karen hit off, and get married. A few years later, they have a child, who is showing signs of Down Syndrome I believe it was? No, Autism. Whatever. But just stop. Stop right there, because, what is happening here isn’t what is happening. They aren’t testing the boy for Autism, they are testing him for reincarnation!

The Conspiracy Within I, Origins

I think I just want to bring this one up and then after that, we’ll file it under, “Things To Do With I, Origins Sequel & errata.” Ok? And these eye scans? They are part of a deeper, more sinister plan happening.  (Right, so file this away, because we won’t get back to this… until after the credits. Literally.) So this eyes scanning business? Supposedly, the eye scanning, it’s all about a new unique identification method wherein no two people should ever have the same eye-scan. But when Ian and Karen’s son’s eyes are scanned, he matches up with someone named Paul Edgar Dairy. But, that’s just a glitch in the system… because that can’t happen. Eye scans are 100% unique. Or are they?

And so, completely stumped by the match with Paul Edgar Dairy. So Ian flies out and visits Mr. Dairy’s family, and learns that he passed away, about a month before their son was conceived. Ten months before he was born. And just like that? Ian and Karen are surmising a hypothesis. And Ian offers up all of his fetish photographs of people’s eyes (I didn’t mention that bit already? Oh, yes, Ian has a serious thing about irises, eyeballs, and the like, and even has thousands of high resolution photos in his back pocket they can use to scan against the database of the global eye scans. And after they scan a pile of scans, Karen (FINALLY) suggests that they should scan Sofi’s eyes. And voila! They find a match against a child in India. A child who was conceived AFTER Sofi died. Nudge, nudge. Know what I mean. Know what I mean. Yeah, I didn’t either. But, because I love you all dearly I’ll just tell you. Ian and Karen believe that the iris scans can show the connection between those that have been reincarnated as someone else.

But to prove their theory of the eye-scans and this reincarnation business, they need to find the child that matches Sofi’s eyes. And after a month or so of chaos and set backs, Ian finally finds her, Salomina. And as a result, Ian and Karen are able to test the young girl for her own likes and dislikes against those of Sofi’s. And unfortunately, the tests come back as inconclusive. But when Ian and the girl head to the elevator to head back down to the lobby, the girl comes completely unhinged. Right? The End.

Oh wait. That wasn’t the end. Because, after the credits, we get a scene that I’m guessing 99% of you didn’t notice. Why? Because, not like another Marvel credits scene, it is shown completely after all of the credits. We see two different scientists talking to each other, and then lots of iris scans happening on the screen. Here’s what the two of them say to each other:

Scientist 1 – “Give me an update on the archivists images.”
Scientist 2 – “We’ve collected hundreds images at high enough resolution, just waiting on your approval to scan.”
Scientist 1 – “No time like the present.”

But, What Does It All Mean!? I’m Lost

The entirety of the movie is all about Ian’s pursuit of proof against spirituality and God. Ian and Karen were searching to shutdown the argument from the Intelligent Designers about eyes and this irreducible complexity business. Sofi though, was constantly pushing back on Ian’s recalcitrant opinions against religion. To get him to see the larger picture. And so, he and Karen do just that, they build a scientific test to validate this idea of reincarnation. But the test fails. It shows nothing conclusive.

But the child is scared to death of elevators! Which, proves to Ian that the girl is the reincarnated spirit of Sofi. And that is significant because he has chosen faith over evidence… which, is the central choice of spirituality over science.

So, think back to the test that was given to Tobias, Ian and Karen’s son. It is a selection of photos of things that would have been relevant to Paul Edgar Dairy. The team was testing the baby’s eye pattern heat map against things that were important to Mr. Dairy. It is the exact same test that Karen and Ian give to Salomina.

BUT THE ENDING CREDITS SCENE?!?

So the two scientists begin scanning high resolution photos of famous people of the past. All of them dead. Here. Why don’t I put two very different people’s scans up for you, and you tell me how they differ:

So now do you get it? Above, we have Abe, and his eyes scanned. And then below his eyes, are a match within the scanned population of the current living individuals in the database. And then we have Hitler, and there is no match.

So what does that mean? Well, if you follow this logic through, then these screens mean a lot. The first thing we can take from these screens? That Sofi lived a good life. Wait. WHAT? Ok, maybe that is the last thing that we learn. The first thing we learn from these two screens? That Abraham Lincoln lived such a good life, that he was reincarnated as another human that is living today. Not only that, but the person he was reincarnated as was scanned among the 300 million people in the eye-scan database.

The second thing we learn in these two screens… Hitler was not reincarnated. But wait! Hold that thought! Hitler may not even be dead. Better yet, even if he is, what are the odds that his reincarnated counterpart are among the 300 million scanned eyes? But, if the logic holds, and “goodness” or “badness” is the measuring stick by which it is determined one’s reincarnatability – then Hitler would be the least likely reincarnated individual on the planet. Or! What if he came back as a fly? The eye-scan database doesn’t work on flies! Right? (Can I mention that the list of names that are flashed on the screen is like, crazy assumptive? I mean, Margaret Thatcher is a no? Really? (Not that I think she would be. But just that that is just so dang judgmental. Like, literally. In the world of the Christian world, where I grew up, judgment is God’s. But wow! This is full tilt! But when you judge people based on their outward actions and not necessarily their heart? I guess that makes it easier. And in their defense, that Thatcher is not on the list? Just could mean the person wasn’t scanned. Who knows?)

Final Thoughts on the Movie I, Origins

Believe it or not, Mike Cahill, the writer and director of I, Origins has stated that actually, the original idea that he had was for a movie entitled “I”. But in order to sort out I, he had to flesh out the back story of I, which became I, Origins. Cahill has stated that I was purchased by Fox Searchlight, but that there were significant sections of the plot that Cahill hadn’t been able to crack yet. I wasn’t able to find any recent news on the progress of the movie I. Which, I would love to see get made. But maybe that’s just me.

As for I, Origins, I really enjoyed that great dialogue, the intelligent premise, and the leaps from science to spirituality with a clear and interesting premise. I understand why some don’t like it – but those people are wrong. And you have my permission to let them know! hahah. I don’t know… what did you think of it?