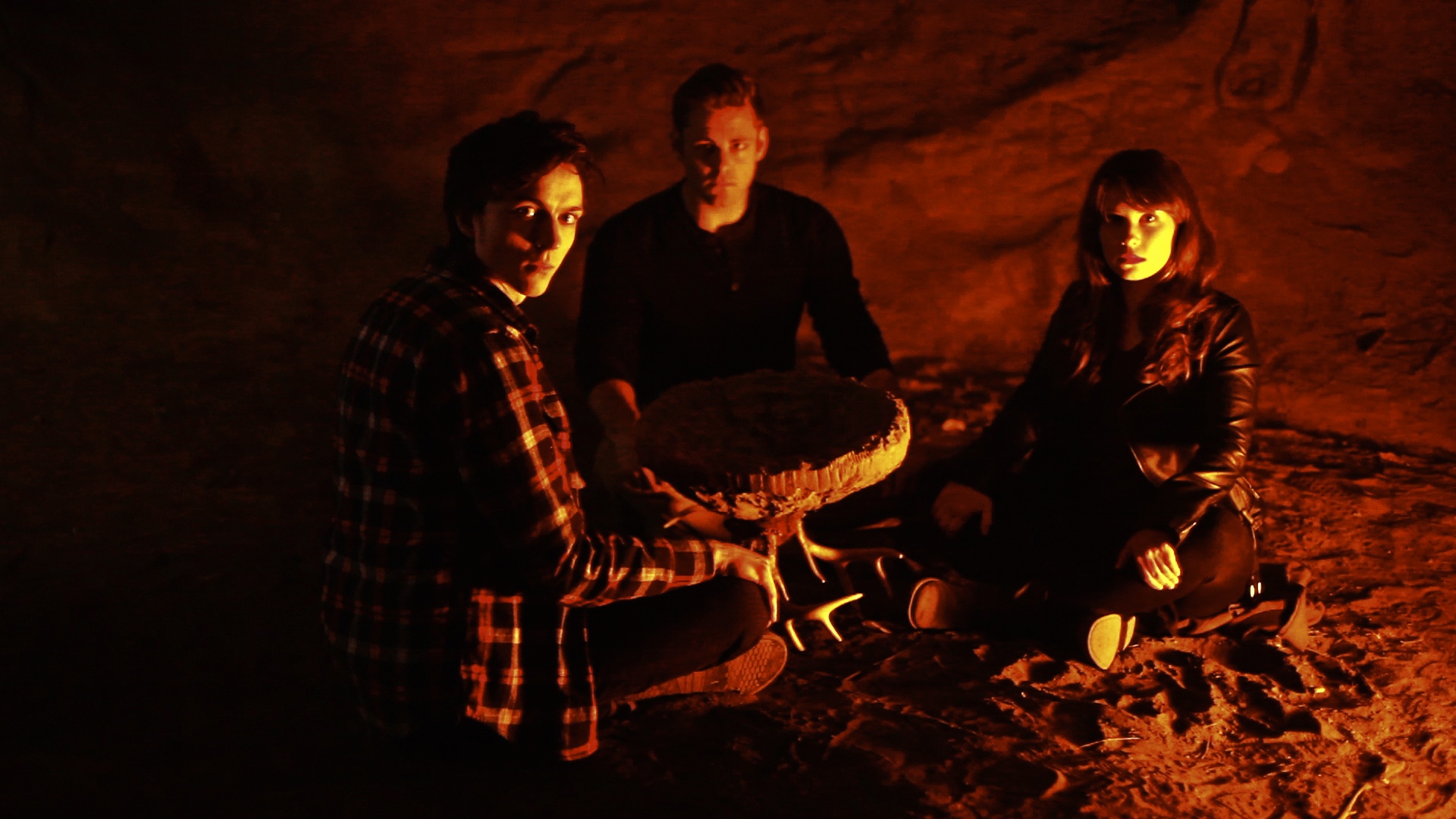 Taylor Holmes
cinema
April 12, 2019
Blood Punch is Deliciously Bloody Groundhog Brilliance that takes a few repeats to figure out what is going on. For us and them too. IMDB
Screenplay
Acting
Action
Mindjobness
Reader Rating0 Votes
4.2

THiNC. is a special little alcove of the wild wild west of the interwebs where we find, unpack, and debate intelligent movies that make you think. Complicated little mindjobs you’ve probably never heard of, like the crazy psychedelic inside out movie Braid. Or what about the Spanish, low-budget, who-done-it, Verónica? Oh no! I’ve got it, what about Elizabeth Harvest? HaHA! I can’t even put words to describe that one. Or, Rabbit? 2:22? Or maybe even the closed box, inside out Indie, Infinity Chamber? Have you heard of any of these movies? Maybe one? That’s what we love doing here – finding crazy movies that are totally worth your time that you wouldn’t normally find on your own. And yes, you are welcome. I only do it because I love you. Deeply.

So today… the movie we are talking about is a delicious, crazy, bloody, mindjob of a film, called Blood Punch. It’s a story about a couple of people locked in a day, repeating over and over again. It’s a story in the form and frame of the movie Triangle, if you know that one. Basically, they are trapped, and they have to figure out the solution to getting released from their 24 hour imprisonment. Let’s check out the trailer, and you’ll see what I mean. But if you really want to enjoy this fully, skip the trailer and just watch it.

Alright – well, the normal dish of how things work here at THiNC. is that we walk the movie through. Like beginning to end. And the reason I do that is because these movies are so confusing, we need to know that we are all on the same page. So if you haven’t seen the movie yet, avert your eyes. Run away. Come back later. Don’t worry, we’ll be here, awaiting your return.

The movie kicks off with Milton (played by Milo Cawthorne), in a forced rehab enrollment, after being caught cooking meth. Shortly after, Milton meets Skyler (Olivia Tennet), a beautiful, if audacious, woman who is in desperate need of a meth cook today. Milton agrees to break out of his rehab and cook the meth for her and her psychotic boyfriend, Russell (played by Ari Boyland). Which will be problematic, seeing as though Skyler has just slept with Milton.

Unbeknownst to Skyler and Russell, and especially Milton, the cabin where the meth cooking is going to happen, is sitting upon a piece of land that has been forever cursed by the blood of Indians. It is the site of a massive Native American war. And the blood of the Indians slain on that site has caused the ground to manifest in peculiar ways. Specifically, every day is forced to repeat day after day until a solution is found to this particular curse. But Milton doesn’t realize this until he shoots Russell with an arrow and buries him out in the woods. The next morning, when he awakes, to find Russell, repeating the same good morning routine just like the previous day, he finally realizes something bizarre is going on here. And when he digs up the grave, and finds Russell1 there in the grave, he realizes something really really strange is occurring. And making it even worse, how did Russell know the last few steps of finishing his meth? Hrmmm. Something very very weird is going on here indeed.

Then, Milton and Skyler get into a routine of murdering Russell first thing every morning, as they spend the rest of the day trying to figure out what is going on. Eventually, Skyler comes up with the plan to finish the meth, and get it to their buyers and make a run for it, that maybe this final step would help them break out of this day after day repetition. But when it’s clear that their buyer’s plan is to just kill them and take the meth, they pretty much decide that is a dead end. And when they get back, Milton gets the idea to check the police car recording logs, and he notices that for today, the logs show over 44,278 hours of recordings.

Which is what? Over five years worth? Now, obviously, most of that time was just Skyler and Russell trapped together. Which brings us to the complications and the tricky bits about Blood Punch…

OK, so Milton ultimately figures out how the glitch works. Which is, you have to kill everyone else, but yourself, to jump from Tuesday to Wednesday. Milton tells Skyler this, but he’s certain to grab all the weapons in the cabin, and all the ammo, and hide them so that Skyler can’t kill him, and leave him behind. But she has the single bullet that she threw up into the antler chandelier at the beginning of the movie. And with that, she kills Milton, and heads out to their drug buyers, to snag the cash and then head out into the wild blue yonder. Only problem is that Milton got smart, left a video for himself explaining what she was about to do. So in the morning, fully aware of what was about to happen, Milton didn’t kill Russell. Instead he tied him up and put him out in the pit with the rest of the Russell bodies. This ensured that in the morning, he would be alive again, and it would keep her from jumping from Tuesday to Wednesday.

At the end of the day, Skyler, with an enormous pile of cash, is obviously dissatisfied and misses Milton. She realizes she shouldn’t have done that. And after getting cornered by Milton who was definitely determined to kill her and move on to tomorrow, he’s blindsided by Russell. And Milton and Skyler are tied up, only to play a round of Russian Roulette that kills Russell in the first shot. And Milton, commits suicide. Why? Maybe because he knows that Skyler actually loves him now. And ultimately she’s worth dying for.

Blood Punch Wednesday. When Skyler awakes finally, after five years of Tuesday, to Wednesday, she’s awakened to Archer, the drug dealer, coming to get his money back. And Skyler realizes what is now being kicked off, again. Another pile of Wednesdays, as she figures out to get the drop on the two of them and finally make it to Thursday.

A few people now have contacted me, asking about what happened in the movie before Milton was drawn into the looping storyline. Well, we don’t know a whole lot, but we can guess as to what happened before Milton joined in on the fun. If you walked the movie through from a timeline standpoint, it would look something like this:

Make sense? By my math, they were trapped at the cabin, in Tuesday, something like 4 years. Four years of constantly trying to figure out how to get free.

What is Blood Punch All About?

I mean, besides being a funny, bloody, Groundhog Day, what is it all about? Well, whenever a movie goes into a loop, and the characters are trying and trying to finally be released, you can be certain that it’s 100% about our moral failings, and our attempts to finally get this thing we call “life” figured out. I mean, think about it…Groundhog Day was only sort of about Phil getting the girl. Sure, it’s what we were made to THINK it was all about. But that’s actually too creepy and weird to swallow. Instead, it was actually about Phil learning to become a good person. To quit being so selfish and such an utter tool. Sure, along the way he learns the piano, and French and whatever else he needs to learn to solve this riddle. But the only thing that really mattered was his learning how to be a good person.

And the same goes here – with more blood. The movie really isn’t about Skyler and Milton trying to solve the riddle releasing them from Tuesday. It was all about Skyler learning how to love. She started the movie out thinking it was about trying to escape Russell’s maniacal grasp. But then it moved into a different educational experience, and that was to stop being so selfish, and to learn how to love. And after she got her way (or thought she had) and killed Milton, she realized just how terrible life can be. Even with money, and freedom. Which was the ultimate lesson she needed to learn to move on. But isn’t it the lesson we all need to learn to move on?