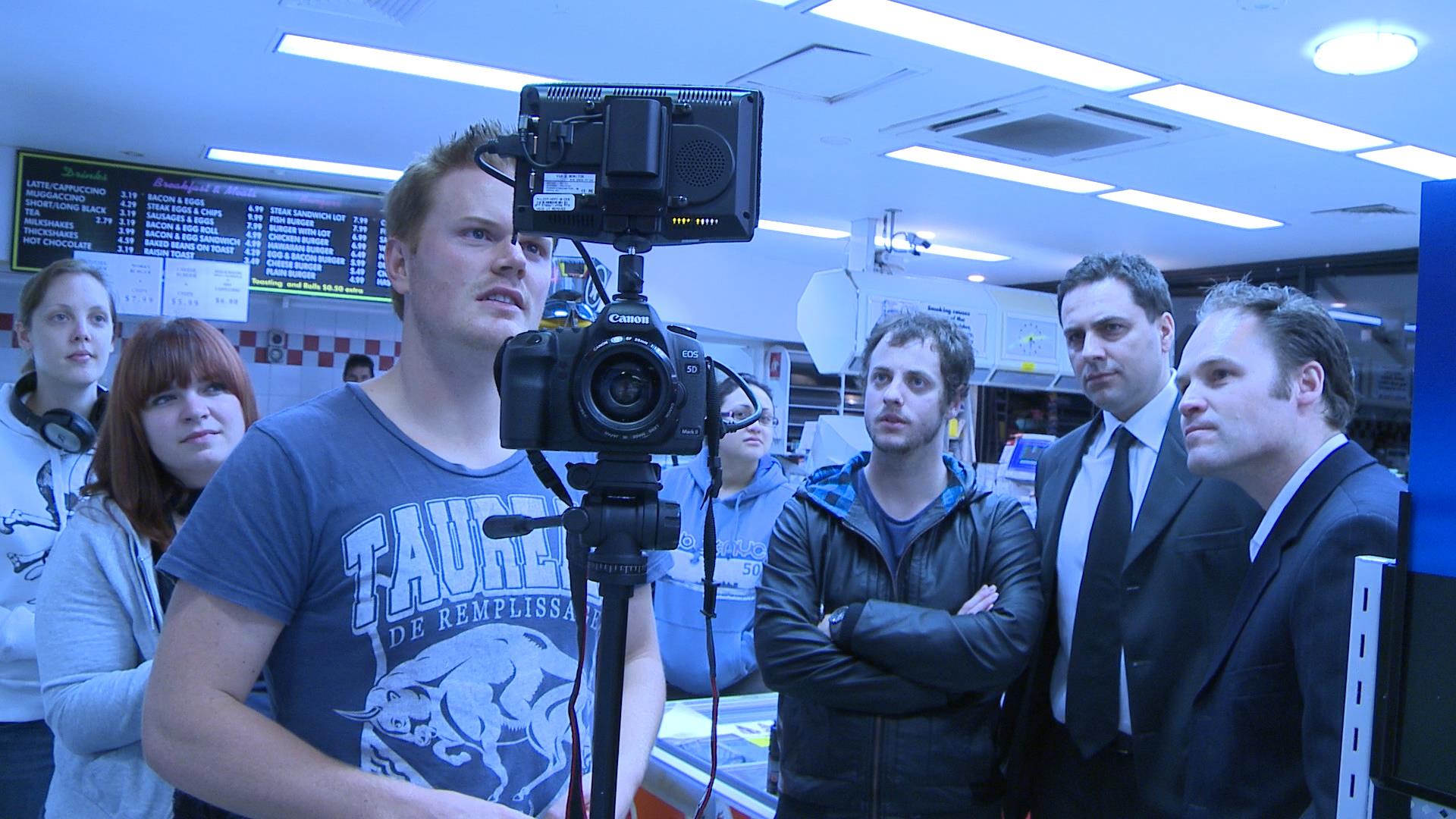 I am possibly the single most selfish guy on the planet. Without a doubt. Let’s just clinch it, and say that I am, decidedly, the single most selfish guy on the planet. Why quibble? I created this blog for the sole purpose of you horking over your favorite mindjob movies. And one of the greatest side benefits of your doing that, is that I then get to talk with the writers and directors that made many of your favorite movies. I know right? That doesn’t even seem like it’s even a little bit fair. Not only did you have to give up the goods – but I also steal, regularly, your date to the prom with said prom date. Man, I am a horrible, horrible individual. Naveen, thank you for bringing this movie to our attention. Better yet! Thanks for helping me get Glenn Triggs attention, which then lead to this cooler than life conversation. (Sorry Naveen! hahahah.) No, really, I really do dig this side perk more than any other. The chance to chat with creatives about their brilliant works of art is truly phenomenal. So let’s kick off this Time Travel Movie 41 Interview with Writer/Director Glenn Triggs shall we?

Oh wait, if you haven’t seen the movie, uh, please watch it here first on Prime. Then come back and read this interview. While there aren’t a million spoilers in this interview, I’d like you better as a person if you had watched the movie first. Can I be that honest with you? Have we established that level of trust yet? Good, sooo, uh, go watch the film first. Then come back, and the interview will actually make sense. Then, join us over in my life size teardown of the film here.

THiNC. – “The single most important question that I want to know about is a strange one. I think I read somewhere that you were working in a call center when you decided to go after filming 41? Or maybe it was Cinemaphobia? Can’t remember. How did you practically go from call center to film creator, zero to 100, just like that? And by the way, can I have permission to make this answer into a book. I promise you 10% of the royalties.”

Glenn Triggs – “I was always making films for a long time before ’41’ was ever a thought in my head, so for a long time I was already at a 40% mode of filmmaking. I was always getting in trouble at multiple jobs for working on scripts and storyboards during my shifts. So when I did decide to leave, it was a relief on the employers and my own behalf. I started a few small businesses and starting making films! Haven’t looked back since. ‘Cinemaphobia’ pops up every so often – that was 2-year project horror film set in a cinema, and is probably the most fun film I have made so far in regards to locations. Just before we finished editing ‘Cinemaphobia’ I jumped straight into the ‘41’ script!”

THiNC. – “Every time travel movie of all time has grappled with the idea of predestination and free will. Where does your film come down on this topic? I mean, I have an opinion about what it says. But I’d rather hear it from you.”

Glenn Triggs – “Somewhere in between I think. I don’t necessarily believe in time to begin with. I do, however, love time theories about future and past, and everything happening fundamentally at the same time. I explored this idea slightly with ‘The Comet Kids’ movie. In regards to ‘41’ – I always felt that there was another version of myself that ended up doing all these things that I never got to do in life – happening simultaneously. That was one of the first seeds of the idea of ‘41’ – so I guess free will and predestination are married in ‘41′.”

THiNC. – “The idea of ’41’ is stellar. The script is definitely the standout here. Has anyone approached you about remaking it? Maybe, just maybe giving it just a wee bit more budget? (Personally I think you did amazing things despite your lack of budget.)”

Glenn Triggs – “The budget for ’41’ was under $3,000 – and that was mainly for camera gear. So this film was made for basically nothing. I resourced everything I could to make it – using 4 motels for the 1 motel in the movie, making costumes, camera rigs, etc.”

“’41’ has definitely had the biggest response to any of my films so far – without a distributor – which is amazing. I have had a few studios offer to remake it – but I don’t have interest in doing anything further with the film and love it the way it is – and where I was in my life as a filmmaker to make something like that.”

THiNC. – “$3,000? Man. Unbelievable. So unbelievably brilliant. Kudos to you. I think that sinks Shane Carruth’s budget for Primer which is legend in the Indie Movie community. Pardon me while I start a standing ovation!

Glenn Triggs – “Originally it was meant to be a mirror that Aidan went through – and he was meant to climb through the glass and appear in the same room upside down. We came very close to making this in my uncle’s garage – but the budget was increasing – and it started to seem like too much work for little on screen story. So it was changed to a hole in the floor. Seemed easier to make with the same effect!”

THiNC. – “Were there any time travel movies that influenced 41?”

Glenn Triggs – “The main film that influenced ‘41’ was ‘Field of Dreams’ – and if you watch it carefully you will start to see similarities between the two. Dramatically and musically. Other movies like the original ‘Time Machine,’ ‘Back to the Future’ (obviously) and ‘Being John Malkovich’ were all in there too!

THiNC. – “Have you considered making the movie 42? Who knows, maybe the bathroom in 42 jumps the person forwards in time? No, seriously, have you considered a sequel? I know you are off making lots of other great movies (which, I will link to here, so that readers can find them. But I am too lazy currently.)”

Glenn Triggs – “Every so often I do have dreams about returning to older films and continuing the story – but that usually fades away after I wake up and reality hits. I have no real interest to re-visit the story or characters. They worked perfectly for the time and place and seem to resonate with people every day. ‘41’ was free on YouTube for a short time and we had over 4 million views, which was amazing. I received messages from all over the world from people that could relate emotionally to the story which was incredible.”

THiNC. – “4 million? What?! That is crazy fantastic. So great to see that many people partake in this über little film. Do you have any movies you are working on that we might put on our calendars in order to look forward to?”

Glenn Triggs – “I am currently working on a very small personal film coming out mid next year called ‘Echoes.’ It’s very original – and has been eating away in the back of my mind for almost 2 years now. And I have 2 feature film scripts in the works at the moment, a large scale comedy (which is complete) titled ‘Bad Movie’ and a massive sci fi film all about time travel and family – titled ‘The Dark Epic.’”

So there you have it, my conversation with Glenn Triggs after he stumbled upon my writeup wherein I embarrassingly looked like an oompa loompa fanboy when I created this timeline for the move:

Oh, well. I’ve done dumber things, for sure. Like crafting this Dark Family tree for season 1 and 2 that took me 120 hours of my hard earned sweat and tears to create. That’s just the kind of full-on dweeb that I am.

Thanks Glenn for taking time out of your busy day to chat with us here at THiNC. It was a fantastic break from all the strange movies we’ve been looking at lately. Cough, cough, Midsommar, cough. Gack. Can’t wait to check in with you again in the future amigo. Keep cranking out those amazing films! ($3,000 dollars?!?!? hahah, unbelievable.)