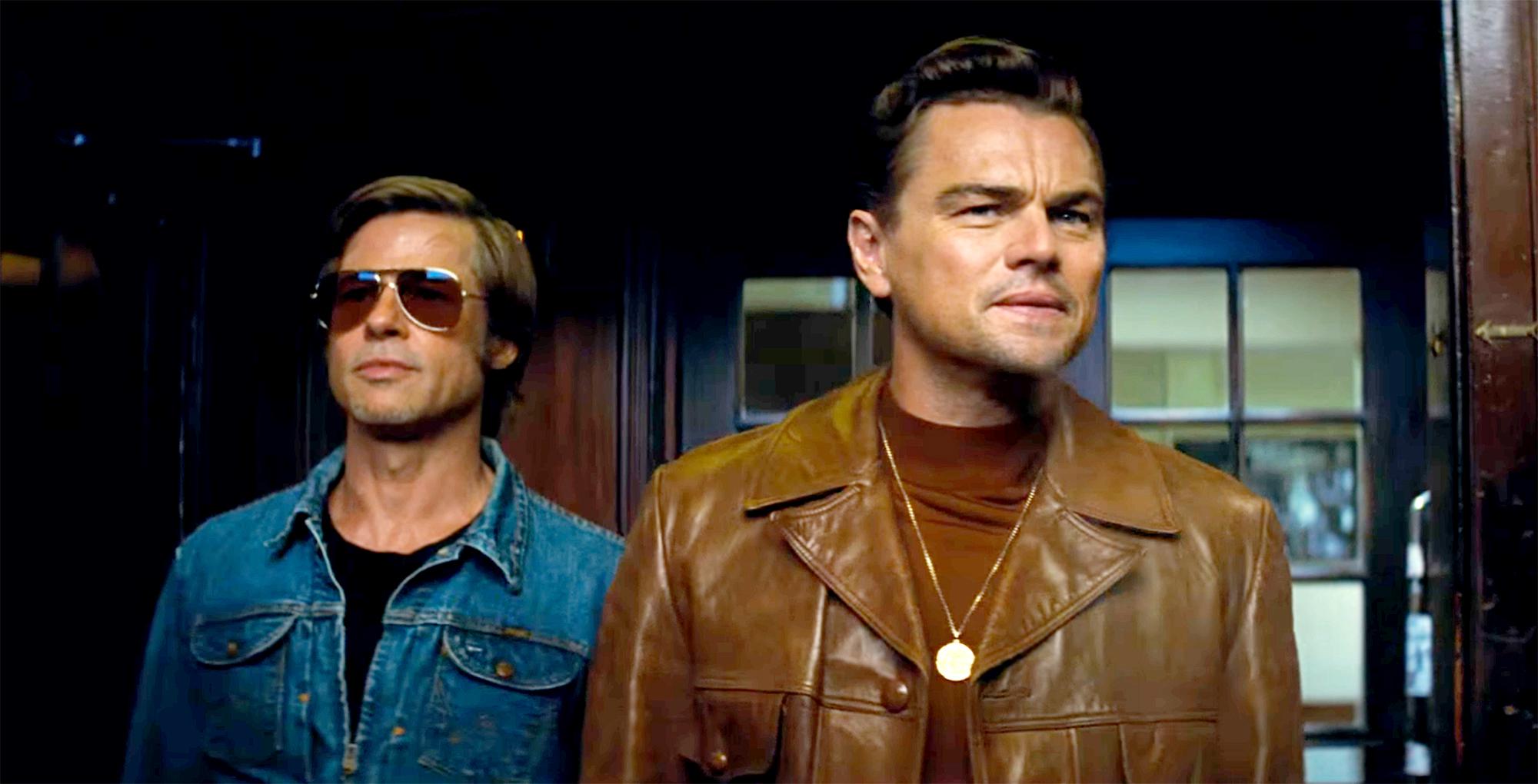 Brad Pitt and Leonardo DiCaprio star in "Once Upon a Time...In Hollywood."

What Did You Think About Once Upon a Time in Hollywood?

This isn’t a normal THiNC. post. Like, not even a little bit. But I went and saw Quentin Tarantino’s film, Once Upon a Time in Hollywood the week it opened. And I haven’t stopped thinking about it since. Not even a little bit. And yesterday, I ran into a buddy out and about, and he asked me my opinion of the film. Literally, my response was, and I quote, “I literally have no idea what I think about it.” His mouth, literally, hit the floor.

But I don’t. I have zero idea what I think. Was it so meta, and such an introspective trade-rag-esque view of Hollywood that it isn’t literally what it seemed to be? Or maybe it was just making fun of itself? It’s just such a tangled web that I can’t really wrap my head around it. And this is from a guy that all I do with movies is talk about their meta-story. This one though is another beast. I don’t know where to take it seriously, and where to laugh along. I don’t really know the larger story of what is happening here.

If you haven’t seen the film yet, the story is really simple. It follows Rick Dalton (Leonardo DiCaprio), a one-time quasi-famous actor on a show called Bounty Law, and his stuntman/driver, Cliff Booth (Brad Pitt). We are watching Rick struggle with the fact that he was sort of a niche western actor that wasn’t really able to successfully cross over to celluloid, and his internal struggles with this reality that he is slowly learning. Here, maybe this trailer will talk you through it better than I can:

The movie might as well have been titled: “Rick Dalton’s Existential Crisis.” Or maybe “Quentin’s Favorite Movies Are Dead.” I mean, really, this is just a think piece, investigating Hollywood’s whims as an artistic medium. Which, are ultimately tied to the almighty dollar. Hollywood’s awful spaghetti westerns died because no one was walking up to the ticket window at the movie theater and paying for a ticket anymore. (And anyone that knows me, knows that I am sympathetic to this particular plight. This blog is 100% about helping us all find films that will actually make you think – as opposed to the standard Marvel super hero rehash.) And I see Rick Dalton as just a stand in for Tarantino himself. This is the only vantage on the movie that really makes any sort of sense to me. It’s a guy who is writing an open letter to the world bemoaning the state of the Hollywood union and the bygone days of its ability to create truly great movies.

When my buddy asked me what I thought I eventually asked him a question. “Are you hoping to go see an interesting drama/comedy, or are you hoping to see a Quentin Tarantino movie?” Personally, the dialog didn’t have any of the normal Tarantino punch that it normally can be witnessed in a Tarantino screenplay. Shall I recount a few lines for you? “If you shoot me in a dream you better wake up and apologize.” – Reservoir Dogs. “Revenge is a forest, and it’s easy to lose your way, to forget where you came in.” Kill Bill Vol. 1. “We got a German here who wants to die for his country. Oblige him.” INGLORIOUS BASTERDS. “Gentleman, you had my curiosity, now you have my attention.” Django Unchained. I mean, YOUR HONOR, I’d like to submit for you today, the entirety of the hallway conversation between Jules and Vincent as they discuss the intimacies or lack there of, of foot massages. I mean, its this level of high quality banter and insights that makes Quintin’s movies impervious to genre, corniness, or genre defiance. At least for me anyway. And probably the only really memorable line that Tarantino gives us in Once Upon a Time, well, the only one that really sticks out to me, is this one:

But maybe that’s OK. Maybe Once Upon a Time in Hollywood isn’t a stereotypical Tarantino flick with it’s over the top violence and hilariously biting commentary on life. Maybe Quentin has done something more mature and something that is saying something bigger, and better than any of his previous films. Maybe? I guess?

What If Once Upon a Time Isn’t Tarantino?

So, a thought just hit me while I was trying to wrap my brain around this enigma. What if this movie wasn’t a Quinton Tarantino movie? What would I think of it if he wasn’t associated? Hrm. That’s an interesting question.

Because then, the movie is actually more about the decline of Hollywood from its western heyday. It seems to be about the phoenix of the film industry flying too closely to the sun and then falling from the sky. Only to find a rebirth in “real life.” I think? It’s about fiction, surrounded by, and missing the, real life – larger than life stories all around us. Like Charles Manson. Manson, who bubbles in and around this movie, but is almost always just off scene. It’s as if this movie maker (whoever he is!) seems to be telling us about the larger, off-screen life that the stories of Hollywood are birthed into, and collide with. I mean, even the title “Once Upon a Time in Hollywood” tells us that the movie maker was letting us know that he wanted to tell his mythical, lore-filled story, in the midst of the story making mecca of the world. And the story that we are told is that of Rick Dalton – our fictional hero – trying to rise to greatness in the movie industry. It’s about his failures as an actor. But it’s ultimately about his moment of “real” potential for heroism. It’s about Dalton’s chance to do something greater.

It’s a fictional story, telling a meta-narrative, that is meant to show us that it is our everyday moments of heroism that really matters. Rick Dalton is a fictional character. But this movie maker has shown us so much about his film oeuvre that we can be forgiven for assuming that Dalton was a real actor. But it was all in the service of sharing this specific idea. Maybe. That he was telling us that it wasn’t Dalton’s career, or his failing fame that mattered, but rather what he did in his “real life.” It was this one moment where he chose to intervene in a tragic situation that really mattered.

The Failure of Films

The fact that I love Tarantino, and his unparalleled writing abilities just made this movie harder for me to enjoy. Did I like it? I think, maybe? But it wasn’t a good Tarantino movie. Actually, it wasn’t even a Tarantino movie (from a shelf on Blockbuster’s shelves standpoint), but maybe if you are a Brad Pitt fan, or a Leonardo DiCaprio fan, maybe this movie is for you? If historical films, especially from the 60’s, are your thing, maybe this movie is for you. But in the final few minutes, Tarantino really shows up in this film. You know, the normal Tarantino. The witty retorts, the flamethrowers, and the chaos. Tarantino arrives full force. But only just for a couple minutes. The other 2 and a half hours though, that is a different thing entirely. So if you hate Tarantino, but love those other things, you have to get a dose of him to make it out of the theater. But if you love Tarantino, and disdain all those other things, there really isn’t enough of him there to make going to the theater worth it. It’s a truly complicated film. It’s Tarantino ala Aesop’s Fables. It’s Tarantino restrained and withdrawn. It’s Tarantino telling various threads of his story that will ultimately end up concluding with fire and violence. And yet, the real story, the story of Sharon Tate, the story that wasn’t being told in this fairy tale, was happening right over —-> literally. One house over.

Let’s call a spade a spade, whether Tarantino is intentionally chasing after a pile of Oscars with this film or not, he is, in fact, chasing after a pile of Oscars with this film. It just seems like a film that the Academy will have a hard time not loving. It’s about Hollywood after all. It’s about the heyday of Hollywood. It’s about the myth of Hollywood as larger than life behemoth, and about its rising from the ashes. How can this film not win at least 5 or 6 Oscars. Obviously Tarantino will be up for best screenplay. And without a doubt, Tarantino will be up for best Director (which, he’s never received before). But also for best actor, and supporting actor. Throw in a smattering of a few other random nominations and I predict the movie hits 5 or 6 wins when all is said and done. Which would be an enormous win for Tarantino. So, I do wonder if Leonardo and Tarantino worked to posture this film entirely differently from the rest of his films. But who knows. Only time will tell on this front. But I do think this side of the Hollywood house caused a significant change in this movie, from the inside out.

Final Thoughts on Once Upon a Time in Hollywood

So, after spending a couple thousand words talking about this particular movie – what do I think about it now? If I divorce myself from Tarantino – and just rate it on the merits, it was a bit slow, and the acting was hinky. Kind of like Anne Hathaway and Matthew McConaughey in Serenity, where they overacted their characters, in the pursuit of a specific point. (Not spoiling that particular movie here.) It made a campy movie all the more campy, and in effect all the more schmaltzy. Same goes here for Once Upon. The acting was just off. There was one scene with Leonardo that was absolutely beautiful – where he tossed the girl on the floor? The one where the kid tells him that that was the best acting she had ever seen…and he cried? That one. It was a truly inspired scene from an acting standpoint. Moving really. But outside of that, it was as drab as the script was uninspired. I would get it though if you were to tell me that I missed the point entirely. Because I’m pretty sure that I did, and that is despite my thorough investigation and searching for one. So yeah, if I were to rate this movie I’d probably give it a 2 out of 5. Yeah, that bad. But seeing as though I’m not a review site, but a bespoke movie recommendation site that prefers to unpack fantastic movies, than dis on bad ones, I won’t be rating it at all.

But what would you give it if you were forced to rate it? What did you think of it?