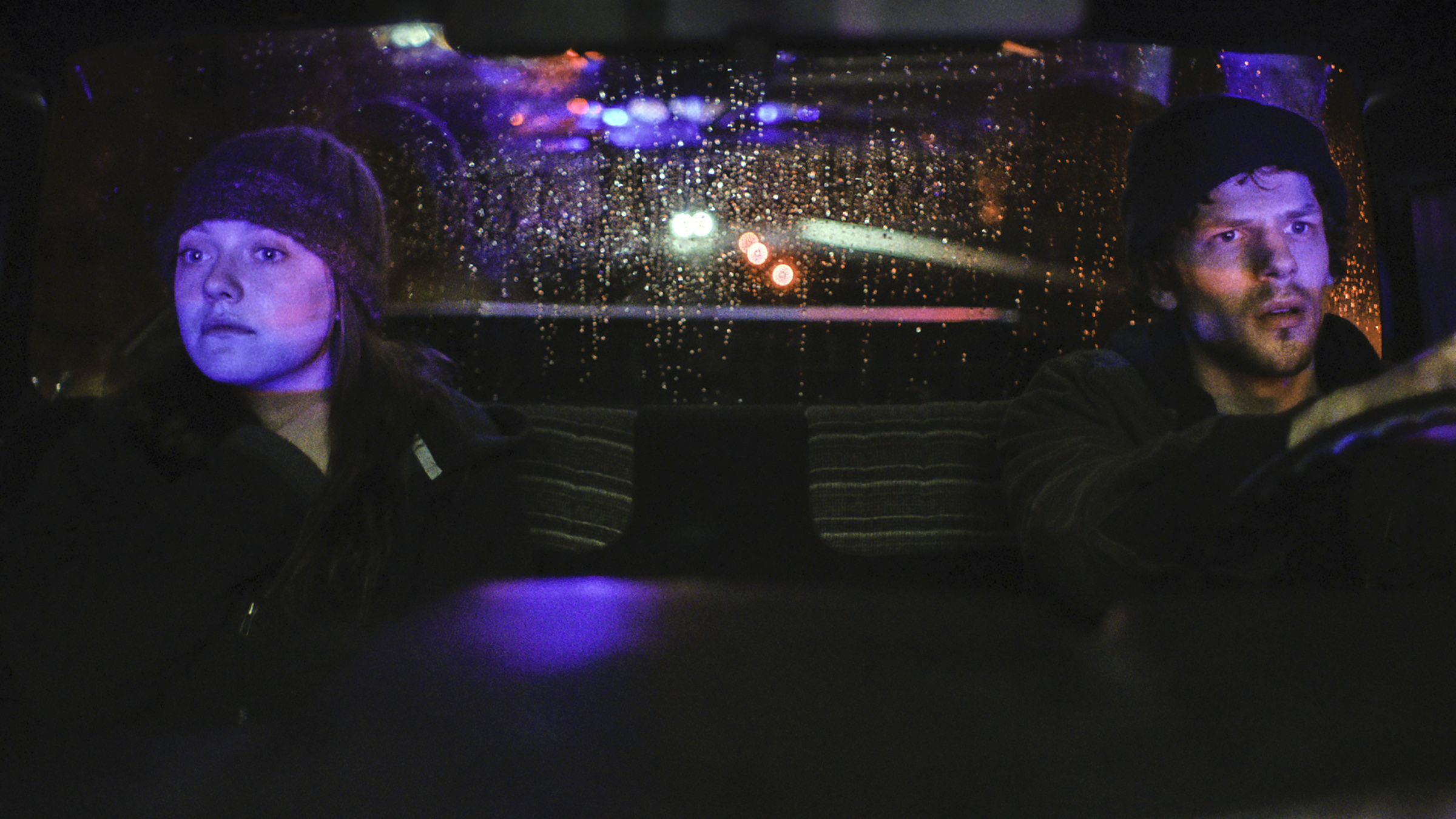 I love outlandish movies. I mean, I’m a huge fan of Nicolas Cage…I love outlandish. But I also movies that aspire to ultra-realism. These are polar opposites in every way. And yet, that is the complex technicolor aficionado that I am. But think about it, how rare is it to find an auteur willing to go after hyper-realism within the boundaries of filmmaking? You spend 3, 4, 5 years making your 100 minute poem to the world, and you want to spend it on reality? Pretty rare. And yet, that is what I have for you today…a story so compellingly realistic, and compellingly dark, as to be pulled straight out of the headlines from this past weekend (this past weekend there were two massive shootings…but hey there future! I bet there were two big shootings your weekend too!! Thus is the state of the union today…sad as it is.) But movies like The Operative (working on a review of this one presently), Leave No Trace, and The East, all seem to be pulled from the framework of ultra-high-def-realism. So, yeah, let’s get to our movie Night Moves’ Realistic Eco-Terrorism Explained…

Night Moves is brought to us by Jonathan Raymond, Kelly Reichardt, bringing Jesse Eisenberg, Dakota Fanning, and Peter Sarsgaard together in order to assemble this scary story for our viewing pleasure. If you’ve never heard of it before – no shame, I’d not heard of it until a couple of weeks ago myself as I was browsing Netflix randomly (Which, I never do. Ever. I’m always so behind on the movies you guys give me, or that I’ve researched months in advance.) – basically it’s the story of a couple of people that are ultra-stressed about the damage humanity is doing to the earth. And they are so convicted what we are doing is wrong, that they are going make a political point about it.

Josh (played by the ever transcendent (translucent?) Jesse Eisenberg, whom you know from Zombieland, and The Social Network) and Dena (Dakota Fanning, from Man on Fire), a pair of ultra-radical environmentalists begin the machinations involved with bombing a nearby dam that they see as being detrimental to the environment. The movie details out the intricate details necessary for pulling off a hit like this – the buying of a boat, the purchasing of fertilizer, bomb assembly, etc. The hyper-detailed focus of these steps almost comes off like a step-by-step manual, or a how-to tutorial. Step one, avoid security cameras. Step two, buy with cash. Step three, utilize realistic cover stories, etc., etc.

The bombing of the dam happens way earlier in the film than I expected it would. I assumed it would be the final 3 minutes of the film, and we’d watch as the trio that pulled off the bombing would be handcuffed and marched to jail. (Which, definitely would have been the lazy way to communicate this same moral. Instead, Jonathan Raymond, Kelly Reichardt took a more grueling method of sharing this same moral. Because it is after the bomb explosion that the real movie pyrotechnics begin. Metaphorically speaking anyway.

After Josh, Dena, and Harmon (Harmon being the bomb expert) say goodbye, the tension in the movie really goes to eleven. Most of which came from the likelihood that someone might have died due to their efforts. Can I say that this is either brilliantly naive writing of characters complete lack of understanding of natural forces, OR, a horribly massive screenplay hole. Just looking at Wikipedia’s entry for dam failures, even as a casual beginning to researching a plot like this would should you that, if you blow up a dam, people are going to die. Dams are enormous stores of pent up energy. And anyone on the other side of that structure is going to be at severe risk for loss of life. Sure, we don’t have schematics for this dam, or the residents nearby, so we can’t say for sure where the people were in relationship to this structure. BUT, the odds are very high that someone may just die when something like this happens.

After evading police, and settling back into his job, Josh starts seeing media reports about a man who has gone missing. After agreeing to never call each other again, Harmon and Josh talk, and then Josh tries to talk Dena down off the ledge. She’s feeling feelings of extreme guilt, and is wanting to go to the police. Meanwhile, Josh’s coworkers start suspecting Josh was involved with the bombing, and they ask him to leave. He also learns that the missing man drowned, which was directly related to the flooding caused by the explosion. After leaving, he goes to talk to Dena one more time, and tries to convince her not to talk to the police. But when their conversation turns violent, Josh finds her in a sauna and strangles her to death. Josh contacts Harmon, and Harmon doesn’t want to know anything, or for the two of them to ever be in touch again. Josh heads into a camping supply store, destroys his phone, and applies for a job. Finii.

Now, stop for a moment. The movie, initially takes up the sympathetic view of the environmentalists. Tells their story of trying to care for the planet, and that the world is just completely insane when it comes to resource management et al. But then comes the logical nosing over into the ground… then let’s blow up a bridge. It is this inversion that the movie is 100% all about. And it is from this logical upending that ends up killing a random camper, and turns the threesome in on itself. But what is this movie talking about really? Is it saying environmentalists are wrong? Is it saying that society is wrong? Is it talking about extremism? What is it actually saying? In an interview with Eisenberg he says this about the film:

“It’s a story of these people with strong convictions and a limited sense of what the consequences of their action will be. So things don’t unravel in the best possible way for them, but they view a lot of the destruction they cause as collateral damage to their much more important goal of sending this message as the environment is being destroyed is wrong.” (emphasis mine.)

These are people with strong convictions and zero idea as to the consequences. Is that the point of this movie? Whether you are Republican or Democrat, we all agree that burning the planet down won’t work for any of us. But if you decide to burn the world down to keep someone from burning the world down…uh. I mean, isn’t that antithetical? But because this movie started off from a “save the earth” vantage means it’s a little hard to track. But, what if the movie had been about a guy that was worried about his second amendment rights, so, he takes his guns, and he – what? Shoots up a liberal coffee joint? I don’t know. And in so doing, inadvertently murders someone. The point would be lost in the discussion about the man’s insanity. No? From this angle though, we can see the larger point a little more clearly.

Even when we fight for the cause of the greater good, but with no idea as to the consequences of our actions? We might as well sign up for the opposing team. We have morally crossed the Rubicon. No? Do I disagree with their larger point? I guess not. We have to think long term for the good of the planet. For sure. But blowing dams in order to make your point? No no no. Literally, that is the definition of the word anarchy. And any moral viewpoint that chooses anarchy to derive its ends? Has already lost.

And we know this because of where Josh goes as the movie devolves. Josh spirals into murder in order to stay safe? MURDER. These are the nice guys, the environmentalists that want to keep the animals safe, and the rivers strong! Murder? Yeah, it’s obvious that Josh’s large idea of blowing the dam went the wrong direction. It went from idealism, to action, to self preservation, and murder.

It’s a great story with a deeper message. It’s complicated, and convoluted. And yet it’s a modern day morality play, with real world lessons for those that would heed its warnings.