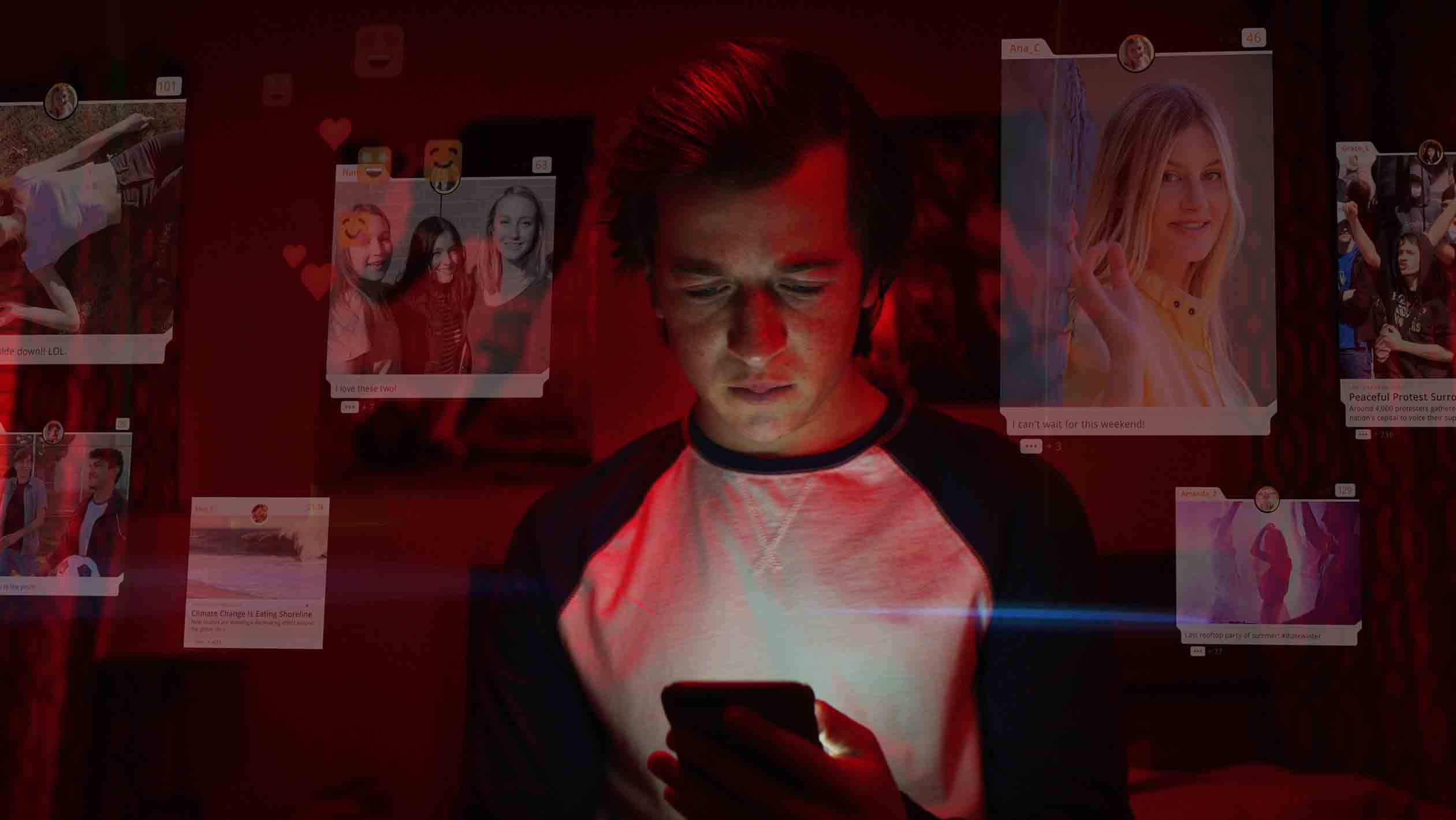 The Social Dilemma on Netflix Should Be Required Viewing

Generally here on THiNC. – I bring you small indie films that are tricky – complicated – intense, or trickily, complicated in their intensiveness. You know, movies that don’t generally follow the standard Hollywood formulaic-ness, and also will allow you to think along the away. But today, I bring you something different entirely. I mean, hold on…it’s still think worthy, of course. This though is entirely different. The Social Dilemma on Netflix Should Be Required Viewing. The movie The Social Dilemma is a polemic on the assumptions around the overall goodness that is social media in the world today. It takes serious mental maturity to handle a movie like this one, and I think today we are going to do a no-holds-barred approach on talking about this movie. The Social Dilemma on Netflix Should Be Required Viewing.

Today I won’t warn you about spoilers. I mean, really? I guess the spoiler would be: “Social media is horrifically bad both for you, and also for society at large.” But, I would guess, most thinking individuals intuit this already. No? But what is fascinating about the The Social Dilemma is just how horrific its assumptions are for you and society. And just how deep the rabbit hole goes wrt the depravity of the social networks.

The film takes a hard look at our current society’s hardcore addiction with social media. Facebook, Instagram, Twitter, Google, and the like. And it is this control over the public that allows these massive firms, and the engineers managing them, to have a massive, enormous level of mind control capability that they wield over society en masse. Through wide-scale data mining, artificial intelligence, full-on technology addiction, and surveillance capitalism, we learn that we are the product being sold. You, and me, we are the ones that Facebook et al. are delivering to the highest bidder.

Think about that for a moment. This is far more insidious than you originally presume. OK… yada yada… they sell my address. I get more spam. Whatever. No. That isn’t what it means. They are literally selling your mind – your attention. And, on top of selling your brain matter, they are also addicting you to their product in order to guarantee more attention, therefore more sales, and ultimately more buyers of their product. You.

It is because of these realities that all of society (local governments, national governments, international awareness, etc.) should be focused on the splinter that is now embedded so thoroughly in all of our minds that we rarely even catch a glimpse of the horrible damage it is doing to our way of life.

So yay me. /s. But stopping right there, welp… I’m not really paying attention, now am I? And, welp, to be honest, neither are you. Twenty years ago, I was working in D.C. on Capitol Hill and was attending some random party/function thing. It was then that I was talking to some powerful Republican Senator’s Chief of Staff…and he asked me who I read to stay informed and on top of the various issues of the day. My answer was George Will and a few other similar conservative writers of the day. His response? No, that won’t do…you need to read liberal writers as well. You need to balance both sides, and hear from both, and from that, make a decision what you personally believe. And because of that advice I started reading and reviewing information differently.

As the film winds down towards its conclusion, it takes up this idea of “fake news.” When Tristan Harris referred to this idea as a “disinformation-for-profit business model” I had to stop the film and re-watch it over again. Why? Because, this idea that American companies make significantly more money (approximately six times more) to allow false stories reach their readers than actual news. And it goes on to think about the news in a new way… and that was… can you imagine if Wikipedia (or the Encyclopedia Britannica, whatever) showed different users different entries based on what they wanted to hear? If you live in the American south…and you head over to the entry on the American Civil War, they could tell the reader that the south won the war…but they don’t. Why? Because they didn’t. And yet, on Facebook, there are splinter groups like QAnon that are constantly proclaiming that the south won the war. What will this splintering and shredding of truth in our social media feeds mean? Where will this ultimately go?

But the more interesting question for me – right now – as you read this, is: what are you thinking? Do you think you are susceptible to social media manipulation? Or do you think everyone else is weak minded but you? Reminds me of past conversations I’ve had with people about how effective marketing advertisements are at getting you to do what you don’t want to do. Almost everyone I talk with tells me, IT’S AMAZING how effective marketing can be to manipulate the sheep around us. But I’m glad I’m not affected. Well, actually Dan…I’m thinking you might just be the first in line for brain control. Those that are myopically unaware seem to be the ones who tend to be the most affected.

I once read about an experiment that psychologists did on a group of diners. If the server gave a mint with the check, the diners would increase their tip by 3%. In the second research group, the server would audibly ask if anyone wanted some mints. How much did that increase the tip? 14% against the control. And in the final group, the server brought the check, and some mints. Then a bit later, they brought another set of mints for the diners, just to see if they wanted a second mint. That group increased their tip by 21%. Now, I just did a little research, and non-bulk mints? They cost .05¢ per. Two extra mints? .10¢? And just like that, on a $50 meal… you generously tip the server an extra $10? Wow. But no. Not you, right? Wrong.

Do you like magic tricks? Everyone loves a great magic trick. Don’t be silly. But magic is just mental manipulation. Obviously that magician can’t saw that woman in half. Or make the coin literally disappear. You are fooled every time though, even though you don’t believe in literal magic. The point here being that we are all susceptible to manipulation. Social media is even worse in that it uses the power of AI, and millions upon millions of samples, to learn how to manipulate you into watching their ad. Or clicking on that link. We really don’t stand much of a chance when stacked against those odds. So what do we do? Well, you can always join me in disconnecting your Facebook account. You can be very cognizant of not watching YouTube videos that are recommended, and instead, doing your own searches for the videos you were originally hunting for.

Also, the Social Dilemma has tools, browser add-ons, and talking points for conversing with family and friends in order to take back control of your technology. There are also some interesting examples of how to see how your habits on the web will reaffirm those same habits – and create a filter bubble. They even will show you how to mix up your news, and keep the same news from flooding into your streams day after day. By intentionally visiting the counter argument to the opinion you have you will rapidly throw the news aggregators a curve-ball.

The Social Dilemma on Netflix Should Be Required Viewing

Look. This conversation isn’t an easy one. But unless we start having it right now, things are not going to get any better. Actually, not only will they not get any better, but we will march headlong into a second civil war. Hyperbole? I think not. We really aren’t that different from one another. But if we allow ourselves to be intentionally polarized simply for a higher advertising click rate, the blame is squarely sitting on you now. You and I need to work at learning from other people across the aisle. Listening, and actively pushing back on the trend that our social networks are pushing us towards. It’ll basically means running uphill until it becomes natural again. But I know we can do it. It’s got to be more important to us than making billionaires their next billion. Just saying. So there you have it – that is why The Social Dilemma on Netflix Should Be Required Viewing.

Interested in other mind blowing movies like this one? Maybe you should check out, Class Action Park? Combat Obscura. And Free Solo.