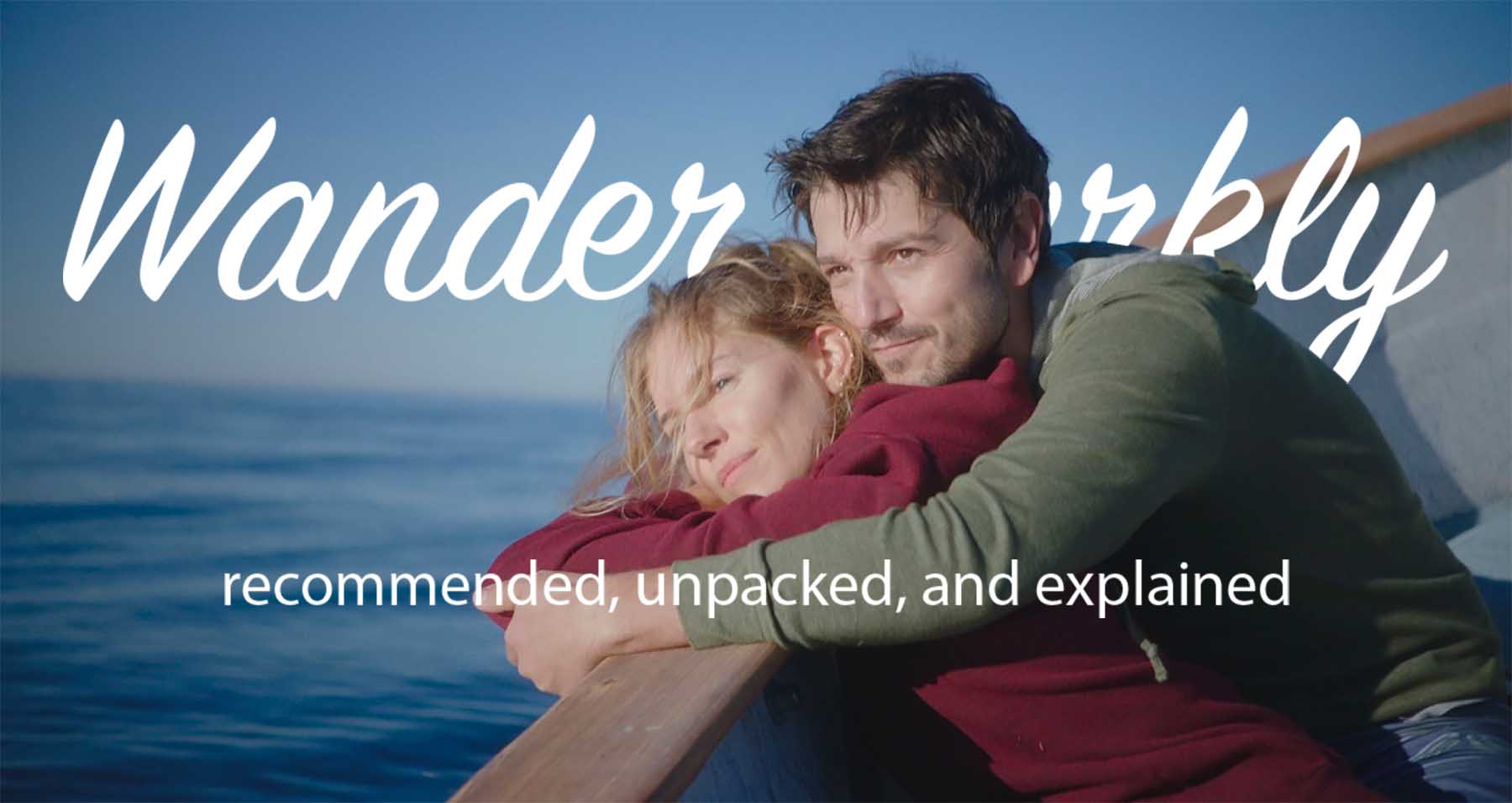 Wander Darkly is the rare movie recommendation that is equal doses poetic beauty, and another equal part morality play. Wander Darkly is helmed by Sienna Miller and Diego Luna, both painting a glorious picture of loss and existential wandering with such effervescence that the film will last in your memory long after its finished. If you haven’t had a chance to see it, please make sure you do before you continue further. This post will delve into the meaning and the insights into what makes Wander Darkly work. If you haven’t seen it, you can stream it here on Google Play and Amazon. Shall we away then? Wander Darkly Movie Recommendation and Explanation…

What Happened At The End Of Wander Darkly?

I loved the cadence, and the lyrical qualities of the movie Wander Darkly. It’s like watching ink flowing and moving in a river… bending, slipping, turning, rivuleting (word? it’s now a word) – all as it flows towards its inevitable conclusion. It all begins with a car crash. Sienna Miller who plays Adrienne, and Diego Luna who plays Matteo, could be having better days. They aren’t married… which is a sticking point. They have just had a child… which is also a sticking point. Adrienne’s mother isn’t a fan of Matteo, Matteo isn’t a fan of this situation. It’s all so normal in its complications and various frictions. You know? But all that gets tossed out the window when, while returning from a date night, the couple are just hammered by an oncoming truck. At the moment of impact they are mid-argument about the state of their relationship. And next thing we know – Adrienne might be dead, wandering the city? She might be, or might not be, a mother? What is real? What is false? Are these alternate realities and possibilities – roads taken, not taken, or nearly averted? (Which would be just like Mr. Nobody, and if you liked Wander Darkly, I highly recommend checking it out.)

Right, so is Adrienne dead? We watch her get body bagged and coded. We watch her watch over her own funeral. It has to be that Adrienne is a ghost, unwilling to depart for the great beyond (Soul anyone? AmmIright?), or something like that, no? But then Adrienne finds Matteo on an overpass for the 10 freeway. Adrienne is about to commit suicide – but, that’s weird, because, can ghosts commit suicide??! But that is when Matteo begins walking her down various avenues that brought them to where they are standing today. The car accident. Everything. But as we go, we know for a fact that Adrienne is the definition of an unreliable narrator. I mean, she can’t tell us anything really, if she’s dead. No? She even wonders if maybe she’s actually in purgatory, Dante’s Inferno, or some lower realm of hell. But if we jump to the end of the film, the rest of the scattered memories, and craziness will be revealed as making sense. OK?

You guys all watched this movie, right? You aren’t allowing me to spoil it for you, am I? Good. Because that would be traumatic. And mainly I mean for you. hehehe. Anyway, jumping to the end, we know that it is actually Adrienne that survives the accident. It was Adrienne who has been horribly traumatized by this chaos, and is forced to make sense of it all. Their newborn baby. Their complicated relationship. His untimely death. And it is only after she realizes this fact, that she is able to actually begin to grieve and to put the pieces of it all back together again coherently. To attend his funeral, to spread his ashes at the beach… etc.

What The Ending Means to the Entire Film

Now, having the ending out of the way, we can quickly rewind to the beginning of the film and see it from an entirely new light. (Did you ever own a VHS cassette rewinder? No? I did. I had 4 of them. hahah. Rewinding VHS cassettes actually put incredible stress on a VCR, and would even cause them to bust more than any other thing that they did. Trust me, I repaired VCRs too. hahah.) Anyway, we need to pop this movie in the rewinder, and go back to the beginning to really make sense of it all. Why? Because the film makers were WICKED smart in how they took you through scene after scene, in order to convince you of one thing, but actually… it was something else entirely. (Like the movie Arrival, right? Oh, wait, you’ve seen that glorious film, no?)

For example. Upon first watch, we go with Adrienne to her own funeral. She stands there and watches Matteo attempt to eulogize her during her own memorial. It is tough, and worse because the dead woman is standing there, watching everything happen. That isn’t what happened though. The editing is important, the cuts are critical. So what is happening then? Well, if you watch closely, you can see that the movie is bouncing from memory to memory, and we’ve jumped into a funeral, but it’s a funeral that occurred prior to the car crash. The funeral, we learn, is actually for Matteo’s mother. She is watching Matteo deal with grief, attempting his best to grapple with it. Understand it. But he wasn’t choked up at her own funeral. Once you see through that particular card trick, the rest of them should start to come clear on their own.

The entirety of the rest of the movie is plucking the conversations of their lives together, out of the context of the past, and revisiting them in the context of the accident they’ve just had. It’s like looking at a memory in all three dimensions. Before, during, and after. It’s like looking at life in the abstract, at a remove. And obviously, this is caused by the trauma of death. Deeply felt trauma is really the only thing that has the power of sliding our perspectives into this neutral state of dissociative abstractness. Regardless, throughout these memories, Adrienne is sort of realizing that her time here on earth is fleeting. Her goal, she realizes, is that she needs to convince Matteo to engage with their child. She needs to break through Matteo’s reticent mind and get him to engage. That’s her ghostly goal. Only problem? Matteo isn’t buying her theory that she’s dead.

Heading into the home stretch, the last quarter of the film, there is a character that has been hiding in the shadows, in the periphery of Adrienne’s memories. Adrienne has been convinced that this character is Death. That it is the grim reaper that is coming to take her on to the afterlife. That isn’t though who the character turns out to be. Instead it turns out to be a hooded homeless person that was there to help Adrienne after the accident. And it is this Death embodiment that informs Adrienne that Matteo is the one that actually died that night in the accident. Which, obviously hammers Adrienne physically. Sends her into a tailspin. Looking back on it, the marriage proposal, the wedding, all of that? Fiction. These were hopeful ideas that bloomed in the middle of her absolute grief.

It turns out that it was actually Matteo that was the one that was the salve for Adrienne. He was the one that was helping walk her through the grief. It was Matteo that brought Adrienne back to the shore that was real life. He reminds Adrienne that she isn’t dead. That things are okay. That though, isn’t Matteo’s larger goal. Rather, it is to help Adrienne move on. To not drown in her grief, and to make it back to the safety of shore.

What do we have when the movie ultimately informs the viewer that Matteo is dead. And it was actually Adrienne who was awash in grief as she attempted to make heads or tails out of her new life reality. A newly formed single mother, raising a child, on her own, is tragic. And the love she had for Matteo is now obvious. His care for her and desire to make their relationship work is absolute. This awakening to this fact though is only now coalescing. Remember how at the beginning of the film, everything was horrible? Nothing worked in their relationship. The entirety of the first ten minutes was the definition of fricative. But as the movie winds down, and the realization that what they had is now gone, Adrienne realizes what they had much too late. So the lesson here is to cherish the loved ones in your life today, before you lose them. Before you are too late to love them appropriately.

I personally thought that the film was a lyrical poem on grief and loss. A fantastic reminder to hold the people in our lives dear. I personally thought the charade went on a bit long – and knowing when to pull the ripcord is a delicate balance. But that is minor mistake in comparison to the lyrical beauty that was Wander Darkly. And on the whole, it comes with a redemptive reminder to value those we love, despite their various flaws. I, for one, could do well to remember this lesson anyway. So how’d we do? Did we do a good job with the Wander Darkly Movie Recommendation and Explanation? Let me know in the comments.