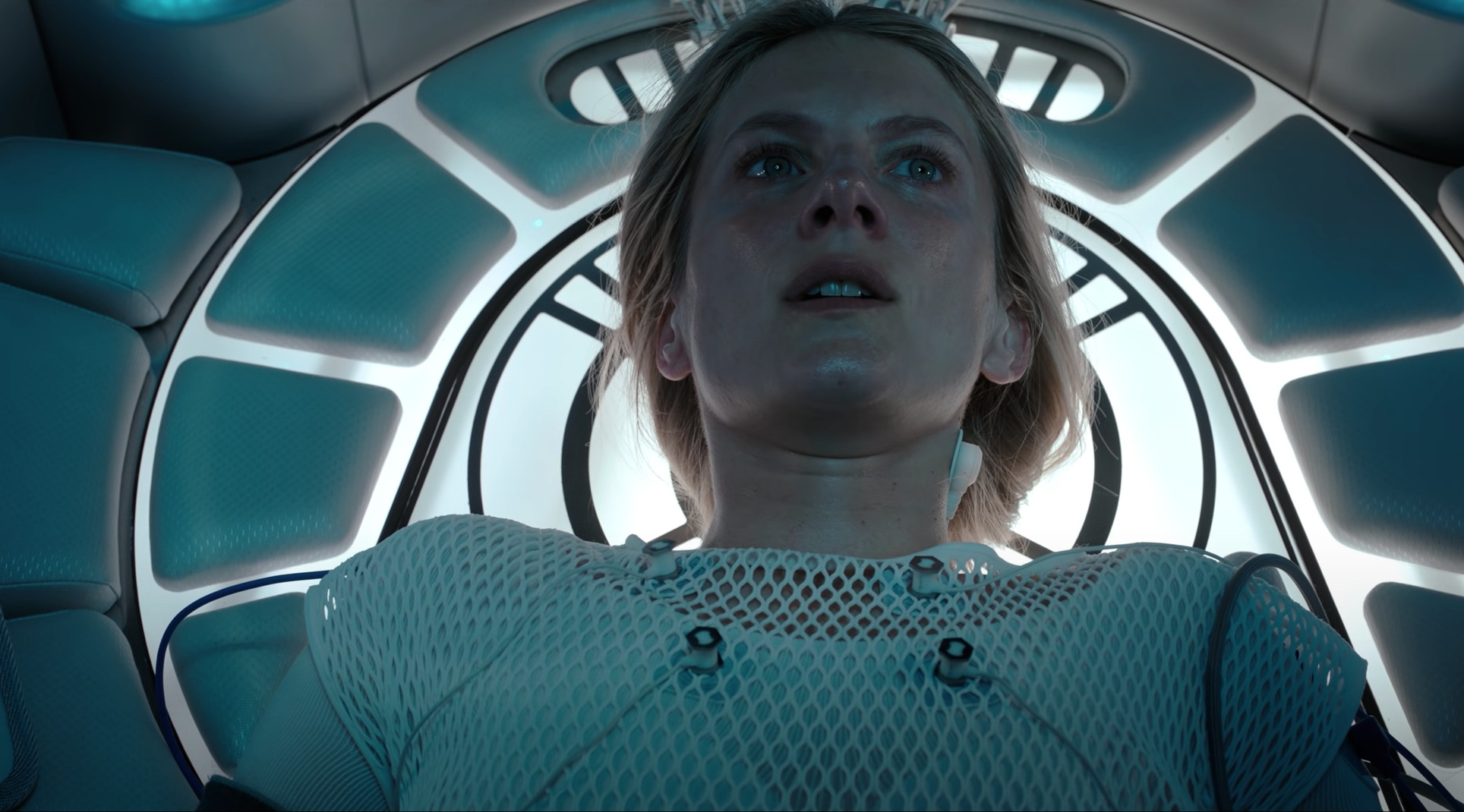 Oxygen French Netflix Film Explanation. Indie? Check. Closed-box? Check. Mindjob? Check. Or Oxygène, which is the original French title. But life is really super busy over here right now – so – we are going to cut to the chase. Oxygen is a film on Netflix that, takes closed-box to the next level. It’s literally a one woman in a cryogenic pod show. I think the only movie that was more closed-box than this movie would be the Ryan Reynolds movie Buried.

It’s my understanding that the film was based on Christie LeBlanc’s 2016 Black List script, and it was originally planned to be filmed in English? Better yet, it was originally cast with Anne Hathaway. And then it bounced Hathaway (or she left or – who knows) and went with Noomi Rapace. But then the pandemic hammered all those plans. And eventually it flipped to Mélanie Laurent in the lead role and Alexandre Aja producing the film. The French push is actually part of Netflix’s drive towards localized content, and was shot right after the Covid lockdown lifted in France last summer. The film just released on Netflix this past week. So get your oxygen-deprivation while it’s hot!! You can watch it globally on Netflix right here.

Look, I already said I’m busy over here. Don’t give me crap about it. Literally I up to my armpits in forms, paperwork, and even drug tests. YES DRUG TESTS. What the the [email protected]#$? Drug tests. Strange I know. I’m sure I’ll have an update out to you all (those of you that are interested anyway) soon enough. But for now, we are speed-running Oxygen. If you’d like to spoil a really clever little movie. Just got ahead and keep reading. I won’t like you anymore. And we can’t be friends anymore… but sure. Go ahead and read.

I could walk through the film in a rehash of the film – but I think it might be way more helpful if I sped through the film chronologically. Like, literally. And to do that will mean SERIOUS spoilers right at the outset. Like, right from the beginning. So, do not keep reading if you would like to remain surprised by this particular film…

Did I get that right? Or close anyway? Basically, we found ourselves as lost and confused as Omnicron 267 when we start because she had never been conscious before. Even after being created as a clone, and having her memories imported from her namesake, she’d never once been conscious before. We are lead to believe that there was some problem with her, that she’d be hurt, or put in some sort of medically induced coma, and her awakening came with side effects. But as the movie expanded, and grew its focus we learn more. Well, more about Liz’s life, if not Omnicron 267’s life.

We learn that Liz was the scientist responsible for figuring out how to transplant memories into others. We learn that Liz’s husband, Leo, came down with the virus, and was hacking up blood before he died. We learn that Dr. Elizabeth Hansen was instrumental in the creation of mankind’s experiment to send clones to outer space. And that was how she had secured a seat in the ark, I mean, one of the pods, for her clone and for her dead husband’s clone as well.

There were several head fakes here with the movie Oxygen. When the movie first opened, we assume she’s in a futuristic, sci-fi, hospital pod. That something bad had happened, and Liz’s memory had been wiped. Then when she starts making phone calls, we are told that she is suffering from a psychotic episode due to her isolation. The wires, and the rats, which she knows are all in her mind… all add up to support this idea. But this person knows that he just got a phone call from outer space. From a clone that has accidentally awakened.

So I enjoyed the head fakes of Oxygen. It had some clever goings on here. But I also found the ending to be fairly unsatisfying. Unlock security protocol 423342. Denied. Fix my oxygen. Denied. Steal all the oxygen from all the lost pods. Okay.

Wait what? Sure, I get the logic of some sort of something or other keeping the processors from allowing the admin of the oxygen swap from working. Yes, the logic of it makes sense. I guess? The arbitrary logic of it anyway. And that there were enough pods that could send her their remaining oxygen, to nicely give her enough oxygen to handle the years long trip? Meh. I don’t know. Just seemed arbitrary to me.

Don’t get me wrong. I love closed-box movies like this. If you don’t believe me, I’ve got a massive list of them that I love. It’s a hobby of mine. Don’t believe me? You can find them right here. Do you have a list of all your favorite closed-box films? I didn’t think so. So, yes, I loved the screenplay here. I enjoyed the tricks that went this way and that. But it all didn’t add up tightly at the end of the day. I mean, it was good. Just wasn’t as tightly woven as most closed-box films usually are.

I don’t know – what did you guys think of it. Trust me, I wouldn’t have recommended it if I didn’t like it. So I definitely did. But I am not sure what it was about the ending that really sort of left me wanting. Oxygen levels at .0053432% – .000324334%. Anyway, fun little film. Clever. But the pieces after the reveal, I think, are where I really seemed to hiccup on the whole project.

If you’d like a few other Closed-Box films to try out in this vein, Locke is really awesome. You really can never go wrong with Tom Hardy. 10×10 was another really great closed-box film that you might enjoy. If you’d like a movie that is more metaphorical, and fantastic for you Philosophy 101 fans? Then try out Platform. If you like closed-boxes with more guns? Then Standoff at Sparrow Creek maybe. Feel free to peruse the list yourself.