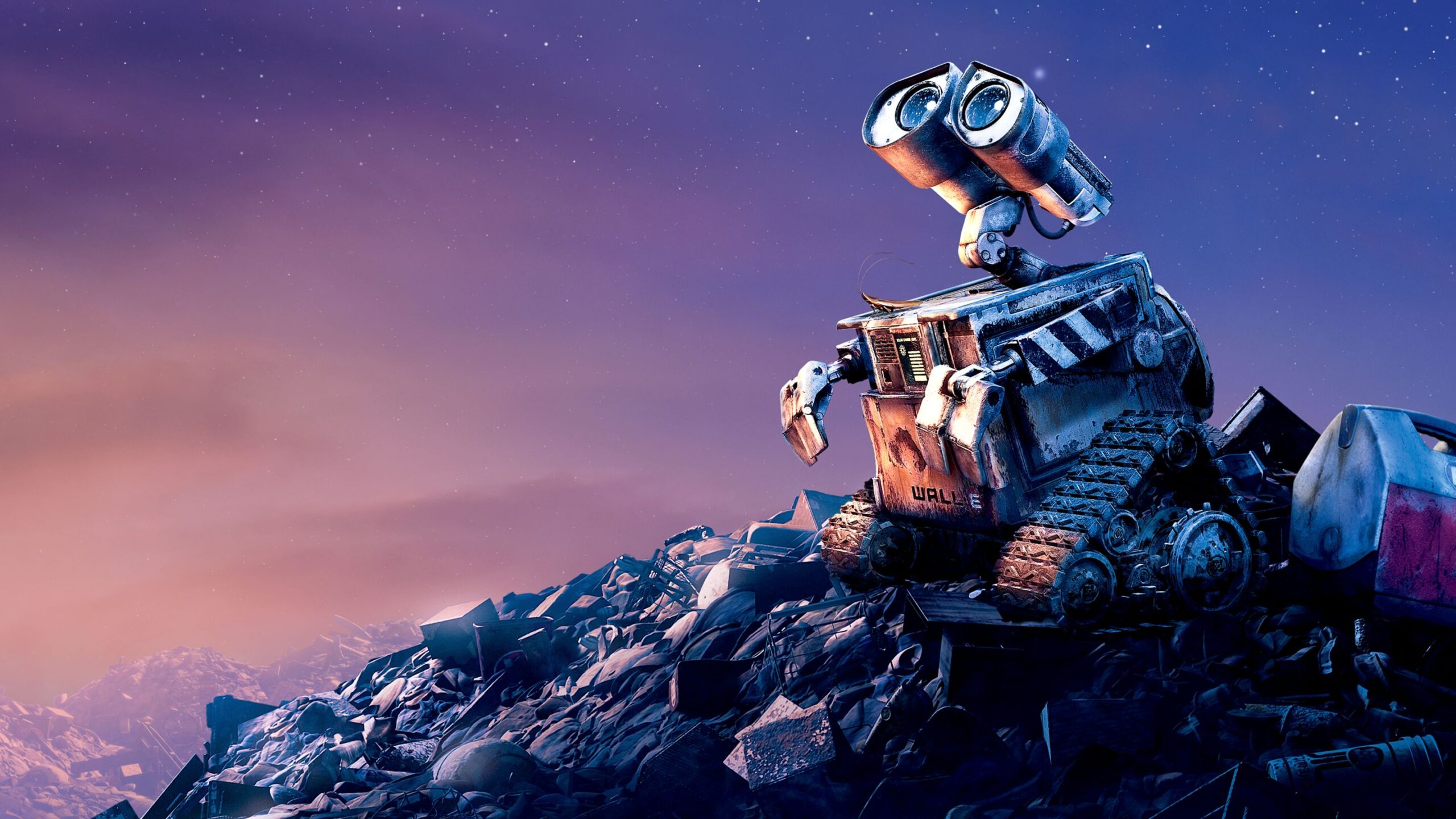 Interested in watching WALL-E right now? Here is where you can find it online right now:

Gonna make a bunch of ex-friends with this comment. I adore animation. Love it. The art of it. The science of it. The technique and the labor of love involved. But, wow, how I do not love Wall-E. Never have. The movie seems lopsided and the people in this movie don’t seem to deserve a hero at all. So why save them? I don’t know. It’s been a while since I’ve watched it, so maybe it’s changed… or I’ve changed… or something. Let’s hit play, and we can see what we see this time around, shall we?

Welp… in the far far future, Earth has become a trash pit. An utter wasteland that was caused by rampant materialism and unfettered commercialism, greed, and corporate irresponsibility. Worse, apparently the Megacorporation realized they could make money by evacuating all of humanity into space via massive Battlestar Galactica spaceliners. And it left behind robots that were meant to compact trash, and tidy up the destroyed planet. But out of the entire fleet of trash robots, only one remains. Waste Allocation Load-Lifter: Earth-Class (WALL-E). As WALL-E works, an unmanned probe arrives carrying an egg-shaped robot… an EVE – Extraterrestrial Vegetation Evaluator. Her purpose? Find out if there is any vegetation on the planet at all. IE, are there any signs of life on the planet… is the planet habitable? Eventually, WALL-E shows EVE his most recent interesting find, a living plant sprout. That was the information that EVE was looking for… and with that, the probe comes back and collects EVE, the plant and WALL-E clings to the probe as it returns back to the starliner Axiom. Have I got this right so far? I might not have been paying 100% attention to everything up to this point – but I do think I’m close.

Cut to the Axiom. In the hundreds of years since humanity left earth, they have devolved into enormous, corpulent, flatulent, and lazy blobs of biological cells. In their near zero gravity world, and with the help of robots to fill their every wish, humanity has hopelessly lost its way. Here’s the thing… the scanning of the plant life brought to the Axiom will light jump the Battlestar Galactica back to Earth. Why? Because it’ll mean that Earth has turned the corner, and will be ready for sustainable life again. (Such weak logic. WE FOUND A SPROUT! THAT MEANS EARTH IS READY FOR US TO TRAMPOLINE ON IT AGAIN!!!) But when the captain of the Axiom goes to scan the sprout, it’s missing… and WALL-E is blamed.

Through a bunch of high-jinks I sort of got lost amongst… WALL-E ends up releasing a bunch of faulty bots, and he and EVE are designated as runaway bots, rogues that need to be hunted down. EVE attempts to punt WALL-E back to Earth via in an escape pod. But while this is happening, the duo see another bot attempting to destroy the sapling in a self destructing pod. WHICH MEANS WALL-E IS NOT THE BAD GUY! PHEW! I WAS WORRIED! More space high-jinks, and interventions, and WALL-E and EVE get the seedling back.

EVE then takes the plant back to the captain of the Axiom – who was watching recordings of the earth, and realizes he needs to save the planet. BUT! The trick?!? The Megacorporation has given the Axiom a secret, never-ever-return-to-earth command. Why? Because, Mega determined that Earth was done. Toast, there was no possible way that it would ever be salvageable. When the captain goes against this super secret, never-return command, bots attack WALL-E and EVE, and toss them into the nearest Starwars Trash Compactor. And the captain? He’s locked in his room. Through a cleaning bot’s intervention (that stretches all credulity), WALL-E and EVE are not jettisoned into space. And the humans and robots rise up, and secure the plant. There is a big battle for control of the bridge, but through the sacrifice of WALL-E, EVE is able to successfully deliver the plant to the scanner, and initiate the hyperjump back to Earth.

After arriving at Earth, EVE repairs WALL-E, but it’s only a kiss that will restore his memory… because… yup, dunno. Robot magic? Not sure. The enormous whale-esque humans return to Earth, and the sapling turns into an enormous tree. The end. Did I mention that the humans didn’t deserve to be saved? No, they didn’t… because we don’t.

Thoughts on On the WALL-E

Yup, still not a fan. Amazing technical achievement. I’ll give it that. Glorious animation. But, wow, did I hate this movie from beginning to end then, and I still hate it now. Now, don’t get me wrong… slice the movie into the first 45 minutes? The silent part at the front where the two robots mess around on an uninhabited Earth? It’d be gloriously perfect. That story by itself is cute and infectious. But the moment it begins thinking about the horrific nightmare that has become we humans? Nightmare-fodder. Like, stuff of torturous dreams and sand in the eyes. If you liked this movie… (and it’s got like a 95% tomatoes score, so a LOT of you LOVE this movie.) I need you to explain it to me. The why you like it part. Yes, cute robots. You get that. But that only accounts for 50% of your 95% score. Someone has to walk me through the last 45%. Cause, a 50% is an F.

So, for me the math is pretty simple. We have two lovely robot characters who are bound and determined to save a humanity that actually deserves to have Alien visit their ship while they bob around the galaxy. They’d make easy food, as they bob about in their conveyor chairs, and their service robots run for their lives. Now THAT?! THAT is a movie I would sign up for.

There is an argument to be made here, that WALL-E is a morality tale. A warning. That if humanity continues on the path that they are on, then they will obliterate the entirety of Earth. That we will be forced onto Battlestar Galacticas, and we will bounce around the universe, getting fatter, and fatter, and we will not care about anything but service robots and conveyed food, and bouncy chairs. Yes, I get that argument. But if you look at the morality tales of old, or how a warning tale is supposed to work… you don’t end up with a happy ending. You destroy Earth. You ship off the people. The robots try and save the day, but fail. And as the ship heads out into the outer reaches of the galaxy, they encounter Alien… and one by one, the Alien feeds on them until their slow, unwitting selves, are all dead. Now THAT is a morality tale. Allowing robots to save the day for a humanity, that doesn’t deserve it, isn’t anything. It isn’t a warning. It isn’t a vision into our Pandora’s box. It’s nothing. It’s an unearned salvation. It is a hero’s journey for a mechanical wonder that deserves to live, and nothing else. If there were justice in this world, humanity would die, and the robots would populate the Earth, caring for it carefully, and bringing it back to its natural wonder and brilliance. Now THAT, THAT is a story I can get behind. But this? This is tripe.