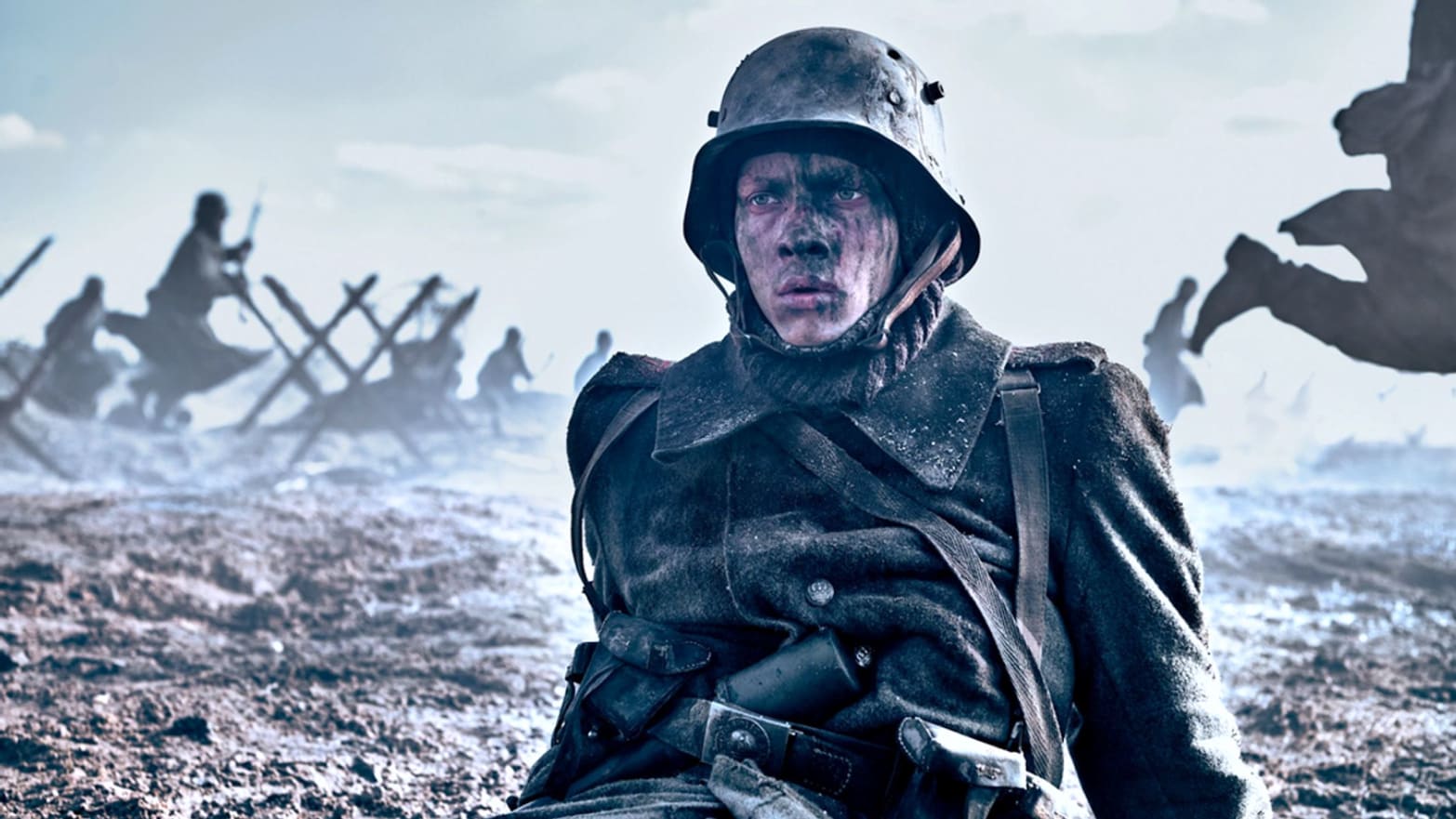 Let’s just say this as unequivocally as possible. Netflix’s All Quiet on the Western Front is a Must See movie that has to be experienced to be believed. Personally, I’ve stated publicly for years now that World War I is a story that is nearly impossible to retell in movie format. Why? Because it is just a horribly ambiguous terror of nationalism, competing border disputes, and hubris. It lacks the moral clarity of World War II. But that means that the Great War is ripe for the telling in the right way. And that is why Netflix’s All Quiet on the Western Front is a Must See German movie. Which, is an interesting choice in and of itself. Why was the book so focused on the German’s perspective, and why was it told from the the perspective of 1918, ultimately the end of the war? See? That is the magic that makes this book, this movie, this story, such a riveting retelling. It’s a story of such horrifically violent hubris that it’s impossible to comprehend.

Trust me, this is one of the greatest war movies of all time. Personally? I think it’s better that Saving Private Ryan. And in league Platoon, Full Metal Jacket, and Apocalypse Now. (Personally, my favorite war movie of all time? Definitely would be Jacob’s Ladder. But that’s just me, you do you… I really don’t mind you being wrong! hahaha.)

The movie opens with a jacket. Well, a jacket and a soldier. That soldier charges into a line of bullets so thick and so hopeless that he didn’t stand a chance. The jacket took a single bullet – and killed the man inside it. The jacket was pulled from the corpse, and sent off the front to be repaired and the redistributed to another new recruit named Paul Bäumer who had just enlisted in the Imperial German Army. He and his classmates get swept up in the hype of a patriotic speech of a school official. They are determined that their enlistments will single handedly turn the tide of this already (unknowingly) lost war. But quickly… literally immediately, their romantic wanderlust for glory and fame on the various battle lines of the Great War is snuffed out. Their first duty on the Northern France line near La Malmaison? To use their helmets to bail out the drowning trenches. “This isn’t what I expected at all.” And, in that first night, Ludwig is killed by artillery.

Cut to, November 7th, 1918, and the German official Matthias Erzberger who, in an attempt to stop the horrendous loss of German life, began negotiating with the Allied powers for an armistice. But before he could start the talks, had to convince the German High Command to start the talks. Meanwhile, Paul and Kat break into a farm, and steal a goose. An extremely instrumental moment in the film, though it turns out well for them… this time. Franz, after their goose dinner, spends the night with a French woman, who gives him her scarf as a memento of their time together.

On the ninth of November, General Friedrichs sends Erzberger and the German delegation head via train to the Forest of Compiegne in order to discuss the details of the possible armistice. The brilliance of the movie is in its anchoring of the honorifics of war counterpointed by the futzing around by the proud men hmming and hawing about the wording and the details. Muddy, bloody chaos, and starvation, counterpointed by silver, porcelain and excess. Paul and his unit are ordered to go find a missing unit that were supposed to report in and reinforce them. But when they head into a factory, they find the entire unit dead as a result of taking off their masks too soon.

Jump back to the negotiations, and we see that Ferdinand Foch, the Supreme Allied Commander gives 72 hours for the German delegation to accept the terms. It’s clear that no negotiations are going to occur… they can either accept, or the deaths on the field can continue. But Friedrichs, who is outspoken in his descent to the negotiations (I mean, how will I be remembered?) sends his men to the front lines in order to attack the French lines. Yet again. So the Germans attack, and they are met with hand-to-hand combat and chaos at every turn. Eventually they are routed through a counter attack via tanks, airplanes, and even the pyrotechnics of flamethrowers. (Literally cannot think of a worse way to die. There is one shot I remember clearly where a man, more an inferno, is crawling to get to a puddle when he dies.) The group of Paul’s compatriots disintegrates as the chaos unfolds. Franz is separated, Albert attempts to surrender and is killed. Paul, trapped in a crater in the midst of no man’s land, is forced into hand-to-hand combat with a French soldier. Paul, gets the upper hand, and stabs the man repeatedly. But at the last minute he attempts to save the man. It’s a truly heartbreaking snippet the highlights the utter madness of war. Stumbling back to his unit, he finds that they are celebrating the impending end of the war. Paul discovers a wounded Tjaden, who hands over Franz’s scarf. But when Paul and Kat bring Tjaden food, he takes the fork and stabs himself multiple times in the neck. He was utterly at his wit’s end at having been crippled by the war. When Paul looks up, someone has stolen Tjaden’s food. I mean, he is dead after all… right? Gah.

Paul and Kat, having had success stealing from the farm before, decide to try their luck again the night before the end of the war. After only getting away with a few eggs, they run away. But the farmer’s son, a kid of only nine or ten? shoots Kat in the gut. Paul, horrified at his friend’s wound, carries him on his back to get medical attention. But when he finally arrives in front of someone that can help, Kat is already dead. Friedrichs, determined to remind the French people of their grandeur on the battle field, decides to attempt to end the war with a German win… (I mean… ) So at 10:45, fifteen minutes before the end of the war, the German men run out into no man’s land one last time. Paul, torn by his loss of Kat moments before, becomes a murdering machine. And seconds before the bell rings 11:00 am… Paul is bayoneted through the heart. Cut to a young German soldier whom Paul had saved in the fighting, discovers Paul’s body and the scarf while collecting dog tags.

Some of the greatest war movies of all time include – purely in my opinion – Legends of the Fall, Hamburger Hill, Full Metal Jacket, Apocalypse Now, Saving Private Ryan, The Last of the Mohicans, The Revenant (that was the French and Indian War… no?) but I would argue that this movie… All Quiet on the Western Front should be considered as one of the best war movies of all time. Maybe a movie I would contend might be better would be Schindler’s List – though I wouldn’t say it is specifically a war movie. It is a movie set during the war… Hrm. That sort of belittles the struggle of the Jews in the camps. Yeah, I take that back. So, yeah, Schindler’s List and Das Boot would be contenders that I would put up against All Quiet on the Western Front. I would say that a modern movie that would rival them all might be Black Hawk Down. Regardless of it’s position on the GREATEST WAR MOVIES OF ALL TIME LIST, I still think that All Quiet on the Western Front is just an utterly perfect movie and should be considered very seriously.

Why? Why would I put it up against the likes of such perfect movies like Schindler’s List? In a word? It’s tragic. As I mentioned earlier, 1917 was a perfectly shot and crafted movie, but lost its way in the technology of movie making. There was no raison d’etre… I mean, you could argue that 1917 was just as messy as The Great War was. Uh, okay. But ultimately told no resounding story or compelling … heck, even interesting, idea. And even the point of the movie was wasted… the orders to deliver the note did nothing. Meant nothing. Was useless. Which, might have been the point? I don’t know. But here, in Netflix’s All Quiet on the Western Front we watch as men, by the thousands and thousands, poured into the meat-grinder of war. Literally. The stalemates of the lines couldn’t be broken but by incredibly stupid full frontal assaults in the face of automatic weapons, gas, artillery, and flame throwers. All the while, we watch as fat men argue about the jot and tittles perforating a piece of paper all while eating extravagantly. (We know now that those particular jot and tittles – and their unbendingness – were a significant cause of the remix of the Great War entitled World War II, but that is a story for another day.) Hubris. and Pride. Pride. and Hubris. Made all the worse by the way kids were being treated just outside those train walls.

Netflix’s All Quiet on the Western Front is a Must See.

Another thing that made this movie truly great was the way in which it sold the idea that one kid would enter the war, and be ruined for the rest of his life. That he’d be good for absolutely nothing ever again. This movie made that make sense. And we could even see it dawning on these characters as it was happening to them. They would be aliens for the rest of their lives, if only they would be allowed to have a “the rest of their lives.” Could be that they’d be better off dead? It was not a hollow question. What would they become? How would they deal with the reality of grocery store trips, clocking in at 8am, and clocking out at 5pm? This movie made it clear that this routineness would just be utterly beyond them… and this made sense to our bones as we watch. Saving Private Ryan didn’t give me that sense at all. The Normandy assault gave us heroes. But AQotWF gave us wounded boys just trying to survive… but knowing that even if they were healthy, something was now innately broken within them.

I’ve started reading the book. This movie is actually not a remake of the original movie… the film makers hewed closely to the book, and not the previous movie, and they did that intentionally. They tried to stay historically accurate in every respect. The clothes that the actors wore got extraordinarily heavy when they were wet, why? Because that’s what happened in WWI. The shoes were uncomfortable that the actors wore… why? Because that’s how they were for the men in the war. So between the book, and the facts of the war, that is how we got this movie. Not to denigrate the previous movie at all – but this is a different animal just in those two respects. And that is why I’ve headed back to the book, mainly because I’ve never read it before, but also if there is a chance that I can get an ounce more of Paul’s story, I’m here for it.