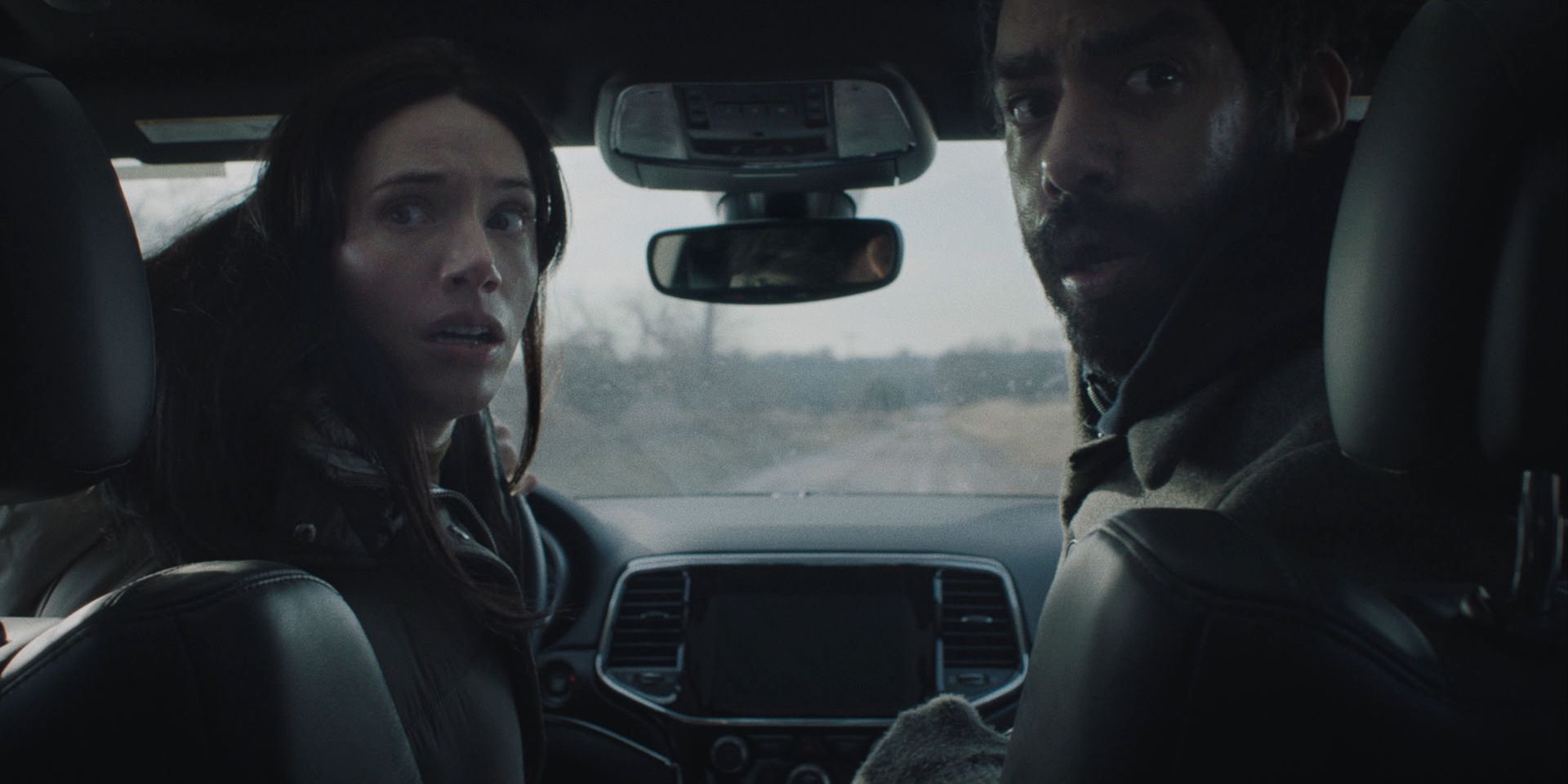 What does the the Ending of Next Exit Mean?

What does the the Ending of Next Exit Mean? Next Exit is sort of a buddy road trip for suicidal coincidental participants. Eh? It’s kinda funny, it’s kinda profound. It’s totally legit, and really heartfelt, and really worth pondering. Mali Elfman – daughter of brilliant Oingo Boingo lead – began working on this script 10 years before it was released. She wrote the initial stub of the movie and then would come back to it pretty regularly during difficult times to add to the film. The movie was shot during the pandemic, in the states of Missouri, Oklahoma, Texas, New Mexico, and Arizona. And that alone makes me love this movie all the more. (Danny Elfman’s DAUGHTER! Side story, Homeroom as a senior… they asked the room, what should our Prom song be… no one answers so I pipe up with, and I swear on a stack of Bibles: “Deadman’s Party” by Oingo Boingo.” and they go… “I don’t think that’s the kind of song we are looking for.” And I go, “Which is why I don’t plan on attending.” I still went… but the rest of that story is a story for another day. All that to say – Oingo Boingo and Danny Elfman for the win.)

The setup for the film is that a scientist (Karen Gillan) has presented indisputable proof that there is life after death. Some people are able to see through to the afterlife, and even video these interactions of sorts. The film then, instead of following The Discovery – which I adored – it instead went (insert record scratch here) 100% buddy road trip? I was so confused at first as to their traveling, I assumed it was just an editing snafu at first. Then I realized… OH! This isn’t a horror sci-fi… these funny bits ARE the movie. Got it. OK. I was just so focused on the dystopian dark thriller aspect of the trailers that I thought that that was going to be what it was about. And yes, there are snippets of that which punctuate the film. But generally, I’d actually characterize it as a new acquaintance road trip flick for suicidal people. And if that puts you off in the least, I get that. But there are moments of brilliance that pop in and out of this movie that cause you to really think about life, the universe, and everything.

It’s like this duo are incidentally forced into taking stock of their lives before offing themselves. And in the process they rob a liquor store, take confession with a priest, accidentally murder a suicidal person, as they start their end of life bucket list mad dash. There was one really intense encounter between Rose and Teddy as they play a game of “Never have I ever” and we watch a really regretful cop admit to murdering a family of five accidentally at the border. It is these weird juxtapositions that t-bone the funny parts of this movie that truly make this film difficult to recommend or classify… and yet, here I am anyway.

There is a scene between Rose and Teddy… Teddy finally gets a chance to find his father, to confront him for abandoning his mother, etc., etc. And it could have gone the fairly standard route… but instead, Rose picks up the role and berates Teddy as his hypothetical father, and in so doing, giving Teddy a chance at re-conciliatory catharsis. A release, a chance to vent and flame her as he searches for meaning for his derailed life. He is going to commit suicide after all. Why? Because he could never live up to his imagined father’s expectations. And we all have some of that chaos going on in our lives. We can never possibly live up to his theoretical expectations. And it ends with the quote, “I didn’t need you then, and I don’t need you now.” Which, is a fascinating quote. Because it literally isn’t true. He’s heading towards California and this study, in order to commit suicide! And yet, we already know that the study is being shut down at this point… or at least Teddy does. But the desire to make something of himself in order to show his father… all rubbish. And we see that, Teddy sees that, and Rose sees that.

What about Rose though? What is her story? Why is she wanting to commit suicide? We know throughout the entirety of the movie that it has to be something traumatic. Scars of psychic pain just spell out some really cosmic chaos in her life. And it turns out that her mother had died, her college loans, school failed, etc., etc. And when she goes to retreat to her sister’s perfect life, and perfect home, she takes her in. It’s humbling, but her sister’s life is perfect. Perfect husband, perfect daughter, perfect house. Then one day, she has an affair with her sister’s husband, and he acts like it never happened, so she now has a hole in her stomach, and the darkness following her about. You see, it wasn’t when her mother died that she could see her in mirrors and TV screens constantly. No, it was after she had the affair with her sister’s husband that it began haunting her.

“And the darkness knows that I have a self destruct button. And it’s fucking irresistible. Oh, I can be happy for maybe a day, or a year. But eventually, I’m pushing that button.”

What does the the Ending of Next Exit Mean?

But you guys didn’t leave your TV, go find your phone, and type into the Google gods: “What does the ending of Next Exit mean” for my general ideas about the overall movie. You went out of your way to get to this page solely because you want to know ‘WHAT DOES THE ENDING OF NEXT EXIT MEAN MAN!?!?” I get it. So, I’ll stop talking about the movie in general, and see if we can’t hone in on the end of the movie, and what that enigmatic ending really means. Alright?

Take Rose specifically, she is haunted. Anytime she looks at a TV, she sees in it, the reflection of a corporeal shadow. The TV will turn on – and we will get an homage to Poltergeist… a very non-subtle reminder of the roots from which this film is drawing from. But what do these shadows mean? We can’t know until we push through to the end when Rose, dies… commits suicide, crosses over. Or what ever else you’d like to call it. Teddy has gotten the catharsis he needed to stay on this side of life. He’s in love with Rose. She helped him open his eyes to the powerlessness his father should have over him. But Rose didn’t receive a similar epiphanic revelation.

What happened at the end of Next Exit: Rose is plugged into her IV, and Teddy gets up the gumption to finally tell Rose how he feels. Give me one day. Give me twelve hours, heck give me 5 minutes to convince on why you need to stay. But Rose declines, and the IV kicks in. And we watch as Rose begins crossing over. And as she starts to see what the other side looks like, her number one goal is to confront the shadow/shape in the mirror… her mother. And so she heads towards the shade, and as she encounters it, a part of the darkness fades and she sees that the thing that has been haunting her isn’t her mother, but rather herself.

The key to understanding this flip is one key detail in the movie. Remember, Rose was really ashamed that she wasn’t there for her mother when she passed. She is guilt ridden as a result. She feels as though she has abandoned her. But the shade doesn’t visit her immediately after her passing. Instead it comes to her after she sleeps with her brother-in-law. Right?

So, if that is the case, then we can surmise what this shadow (at least for Rose anyway) really means. This haunting is her own guilt manifesting itself in the TV’s reflection. What Rose is experiencing has literally nothing to do with the after life. Instead, she is getting hit with shame, guilt, and the moral debt of betraying her sister. Why did she do it after all? Rose: “I mean, I wanted the the jeans advertisement for myself… ” She was jealous of her sister’s life. But the funny thing? Rose’s sister’s life was shite anyway. How do we know? The last time the two sisters talk we see very clearly that her sister knows what happened, doesn’t want to know, and what she wants from Rose is that she’ll finally focus on her own problems instead of everyone else’s.

Now, Rose is dying/dead… right? And there, she quickly realizes that she is her own worst nightmare… not just from the shade revealing itself, but also based on what her sister said to her previously. She realizes that her current afterlife as it stands today would be hell, or a version of hell, if she stayed. And so as a result, she pulls out. Right. This is the weakest moment of the film, but a long shot – but regardless, she snaps back out of death, and pulls the IV, and decides this “crossing over” business is for the birds. But it all logically follows though – right? Well, with Rose, maybe… but only partially.

A Few Open Questions After the Ending of Next Exit

A. What is the deal with the boy and his grandfather from the beginning?

B. How/why was life after death so definitively proven that people started committing suicide?

C. Why did Teddy want to kill himself?

D. Why did Rose want to kill herself?

E. Who was the shade following her? Really?

A Couple Thoughts on Next Exit

This movie was literally all over the place. I found it to be funny. I found it to be scarier than it had any reason to be. I thought the acting was decent if a bit of a windup toy, stopping and starting in places. But for an Indie concept flick that was trying to say something, I enjoyed it. The messages were a little bit cliché, and yet, the messages bear repeating when it comes to suicide. But over all, I give this one a solid three out of five on the THiNC. scale. The best part of it was definitely the ways in which the movie worked hard plumbing the depths of assumptions, fears, and the idea of moral debt and failure in our lives.

Personally? I make mortal errors weekly. Haha. I screw up in such profound ways as to cause me to blanch at myself regularly. I have so many massive screw-ups in my life I need an intervention! It is the worst thing in the world to be forced to count on saving yourself from your own massive mistakes, moral cave-ins, or ethical tsunamis. Why? Because its really impossible. There is nothing that we can do to save ourselves. But I did like how this movie allowed both Rose and Teddy to hit the reset button… to start over. Who knows if it will get better for them? But I do know that even with the ways in which they were constantly misstepping, they deserved a fresh start. I don’t know – what did you think of the movie? Good, bad, or indifferent.