I have lived my life shielded by a million different screens in hopes of never being rejected.  I have conformed to the pattern of my friends, my co-workers, my society and my world.  And some of that was excused or explained by the fact that I am a social entity living in a social world where compromise is required to just survive.

Them: “Where are you going?”

Me: “Downtown dude – you know exactly where we are going.”

Them: “Might as well take us via the dark side of the moon man – why are you going down Elm?”

Me: “Elm is the most direct route.  Pull up your iPhone it’ll tell you.”

Sure.  Give and take like this is central to human existence.  Without give and take like this its impossible for us to work together towards a greater common purpose and a greater mission.   But how much have we given up though in the fear of not being accepted… in the fear of being outright rejected.  You believe THAT?  You’ve got to be kidding me – RIGHT?  Wouldn’t that be the worst possible kind of rejection?  Especially while in front of the collective – all your friends and family even?

Enter the social experiment.  Researchers at Leeds University, led by Prof Jens Krause, performed a series of experiments where volunteers were told to randomly walk around a large hall.  Participants were not allowed to communicate with one another but had to stay within arms length of another person.  I don’t know about you but visions of Dead Poet’s Society are currently running through my head.  But here’s where the experiment took a right turn from where Dead Poet’s went.  The scientists then gave a few individuals more detailed instructions on where to walk.  Here’s where the experiment got interesting, the scientists discovered that people end up blindly following one or two people who appear to know where they are going.

The findings show that in all cases, the ‘informed individuals’ were followed by others in the crowd, forming a self-organizing, snake-like structure. “We’ve all been in situations where we get swept along by the crowd,” says Professor Krause. “But what’s interesting about this research is that our participants ended up making a consensus decision despite the fact that they weren’t allowed to talk or gesture to one another. In most cases the participants didn’t realize they were being led by others.”

Maybe that experiment was a fluke?  Try this one on for size.  A researcher named Solomon Asch took groups of individuals and gave them a collective vision test.  They were then handed questions like the one below: 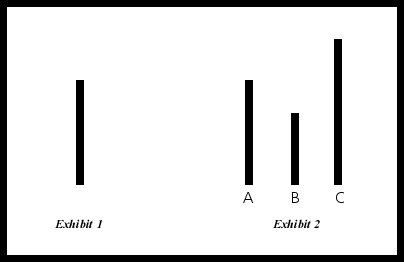 So how have you been influenced by the 5% today?  Or would you be a part of the 37% to go with the obviously incorrect answer?  I would suggest that everyday we are influenced by what you cho0se to wear.  By the music you are listening to right now.  By your political opinions and your affiliations.   But I hear you saying – but not me baby.  I’d be the guy that chooses not to walk at all.  I would stand up for my individuality and would fight for my own right lean against this wall right here!  Let me reiterate – the findings show that in ALL CASES, the ‘informed individuals’ were followed by the others in the crowd.

Alright, granted.  It takes 5% to influence an entire group’s decisions on things that don’t really matter (walking around in a hall).  But maybe it takes a little more than 5% on things that do matter.  Maybe a little more, but I’d bet copious amounts of Mountain Dew that its not a whole lot more. And what’s more is that I would even go so far as to posit that Social Media, Web 2.0 (Facebook, Twitter, Blogs (ironic, I know)), accelerates group think and undermines convictions all the more.

So all this to say – standing with conviction is difficult.  Believing in a fixed truth runs against our mental/psychological grain. At the end of it all, our society begs to be told what to think.  About everything.  What kind of soda should I drink?  Do I matter?  What kind of boots should I buy?  Am I loved? What is the best hotel in the area?  Is there a God?  Is coffee actually good for me?  Does God know I exist and love me?  The Bible runs counter to the logic of this world – it turns it all on its head and doesn’t flinch in the face of social criticism or the tide of popularity.

“Let no one deceive you. If anyone among you seems to be wise in this age, let him become a fool that he can become wise. For the wisdom of this world is foolishness with God.”  1 Corinthians 3:18

To this end, here is a video of a poem – with fantastic typography I might add – discussing this very thing.  Stand with conviction.