Update – Congratulations to Disney and their Oscar for Paperman. It definitely was well deserved! As a side note I thought it extremely cute that Kristina Reed was kicked out of the Oscars after throwing three paper airplanes from the balcony. The paper airplanes were covered in lipstick kisses apparently. (If you haven’t seen Paperman, this motif won’t make any sense to you. But seeing as though the entire movie is about paper airplanes and love – it was brilliant.) After a quick uprising was held on her behalf Reed was allowed back into the assembly apparently. Kudos to you Kristina, you are my new favorite employee at the Mouse. Well done! – /Update.

Sorry, but Disney took Paperman down after complaints about fairness. I’ve found another copy… hopefully this will stay up a bit longer? A bring you – Paperman:

Apparently Paperman is up for a Oscar Nomination.  (And won!)

I absolutely love the throw back animation style here.  It obviously cares so much about the line drawings of the back in the day style.  Disney’s classic drawing lines were so beautiful – the curves and the lines so wonderfully rendered.  I’m thinking of Beauty and the Beast, The Little Mermaid et al.  I used to purchase the makings of videos just so I could watch the animated pencil sketch versions of the movies as opposed to the finished and “cleaned” up version.

To that end I spent a couple minutes speed sketching from the video.  I’ve dropped a couple of those sketches below.  I refused to allow myself any time on these just so that I caught enough of the lines that stood out at first glance. 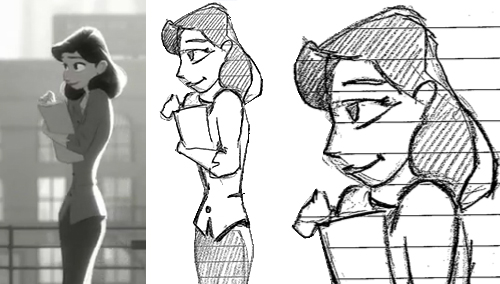 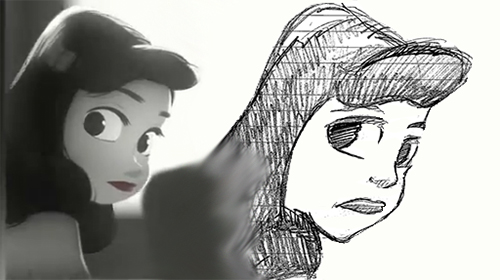 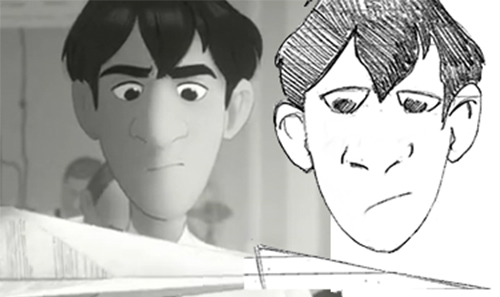 After sketching a bit I went searching for the behind the scenes of why/how Paperman was made.  And came across a couple of interesting details:

Speaking to Cartoon Brew recently Kahrs said, “Seeing all that drawing, being at Disney, being surrounded by that legacy, how exciting, and how much punch there is in the drawn line, how expressive it can be. And how hard the CG guys have to work to try to match that charm. I thought, Why do we have to leave these drawings behind? Why can’t we bring them back up to the front of the image again? Is there a way that CG can kinda carry along the hand drawn line in a way that we haven’t done before?”

Apparently they created a new CG effect they call Meander to do this style.  Which gives us the beautiful penciled looking lines and the gorgeous other-world effect.  Absolutely love this little movie.  Obviously there is a lot more to it than the drawings themselves.  Its also the charm of the story and the lack of dialogue.  The entire story is told by the acting and the eyes.  Just a gorgeous movie over all. Call me a hopeless romantic… I know, its true.