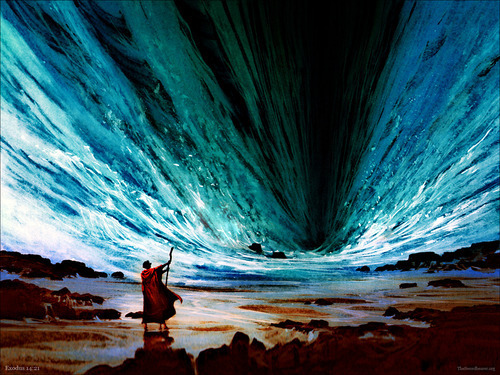 Quick recap.  In this series we are going through every single book in the Bible from Genesis to Revelation and grappling with the thorny bits of the whole of the Bible.  This month, is Exodus.  I will be responding directly to my atheist counterpart, which can be read here. If you’d like to follow along from the beginning you can do so here.

Summary: Genesis left off with Jacob’s family saved by Joseph and his saving the world from famine as the Pharaoh’s right hand man.  Exodus jumps forward in time and finds their enormous family now slaves in Egypt.  Moses is born and becomes a prince of Egypt.  Moses kills an Egyptian and once discovered flees.  Moses talks to a burning bush and then heads back to Egypt to convince Pharaoh to let his people go.  No dice, no dice, no dice… alright you can go. No wait.  Then we get the 10 commandments.  Voila, Charlton Heston.

The Bible is filled with just crazy, wild eyed, jacked up characters.  We got roaming demoniacs, naked prophets, incestuous women hoping for children, and even stuttering spokespeople.  The reason that I personally know that the Bible is legit is because you just can’t make this crap up.  The book of Mormon on the other hand is constantly being massaged.  When it was discovered that the area of the United States was populated not by descendants of the Israelites, as the book of Mormon teaches, but by Indians that have zero genetic ties to the Jews decided they would change their book to match this inconvenient truth.  The Bible on the other hand just lets their baggage hang right out there for everyone to see.

As we continue throughout each book of the Bible this will come up again and again and again.  Humans, being our normal idiotic selves, and honestly portrayed throughout the Bible.  In Exodus we get the story of Moses among other daft characters.  Moses was saved by his mother who slid him into the river during a ban on all jewish children.  But the problem was, the Jews were breeding like rabbits.  The were overwhelming the land of Egypt.  So Moses goes into the river only to be pulled out by an Egyptian Princess, Bithiah (per Hebrew custom).  Moses is raised as a prince in the house of the Pharaoh and given the best schooling imaginable.  Then seeing the plight of his fellow family members, and seeing an Egyptian senselessly beat a brother, then at the age of 40 Moses steps up and kills the offender.  This then sets the stage for Moses’ heading out into the wilderness for another 40 years of his life before he’s called by God via a singing bush.  No, wait, wrong movie.  A burning bush.

Here’s where this gets interesting.  Until now, Abraham, Jacob, Joseph, never really got a great handle on who this God was that they were following and whom they had this covenant with.  So Moses, attempting to get out of going to Pharaoh decides to ask Him exactly that in Exodus 3:

Then Moses said to God, “Behold, I am going to the sons of Israel, and I will say to them, ‘The God of your fathers has sent me to you.’ Now they may say to me, ‘What is His name?’ What shall I say to them?”  God said to Moses, “I AM WHO I AM. This is what you are to say to the Israelites: ‘I AM has sent me to you.'”

Say now what?! Let’s role play this scene out a bit, because right now this just doesn’t make sense:

Scene: Brightly lit grocery store, halfway down the juice aisle. Old man is staring intently at the wall of juices. But obviously one is missing.

That would be confusing. Just a bit. But then the I Am Who Am starts explaining by telling Moses that he is the God of Abraham, Isaac, and Jacob. And that He is concerned for His people, that he cares about His people locked in slavery in Egypt. Just another sign that this isn’t a dead book, but a love letter… a love letter telling the story of the greatest love story of all time.

I once had a Jesuit Philosophy professor that taught at a state school part time. He was awesome, just full to overflowing with interesting factoids about the Bible. And He said that a better translation of this name of God would be The I AM Who AM. I don’t think that’s English, but its abundantly That has always resonated with me. And we see here that in this section, that the I AM is concerned for His people. So much so that he negotiates with Moses about going back to Egypt in an attempt to allay his fears. “Alright, Alright! Aaron can go too!”

My point here is that so far in the Bible we haven’t had much interaction with God. We had the fruit thing going on at the beginning. A bunch of water, a natural disaster, along with Noah following God’s leading to build the ark to keep a remnant alive. Then there was Abraham interacting with God and receiving the covenant. Joseph was given assistance in the dreams. And now we have Moses standing in the wilderness, talking to a burning bush that is clarifying who this God really is. And in this early encounter with the creator of all things we discover that this God is different than the other gods that Moses would soon be interacting with as soon as he returns to Egypt. But most of all we see that God is concerned for the well-being of His people.

“But the Lord hardened Pharaoh’s heart, and he was not willing to let them go.”  Exodus 10:27

“Moses and Aaron performed all these wonders before Pharaoh, but the Lord hardened Pharaoh’s heart, and he would not let the Israelites go out of his country.”  Exodus 11:10

What exactly is that about?  It sorta seems like He tells one guy to go do one thing, and then he tells another guy to do exactly the opposite.  Makes zero sense.  Right?  So I went scouring this way and that trying to find something in the Bible that speaks to this hardening business.  I mean, if He really is God, I really don’t have much sway in telling him what to think. But I would like the opportunity to understand it better.  And then I found this quote in Romans:

But ultimately, does that help? God will extend His grace to those whom he wants? Very reminiscent of Job’s conversation with God in Job 38 and beyond. “Can you loosen the belt of the pleiades?” “Can you tell me where the snow storehouses reside?” “Tell me, good sir, if you know where twinkies come from?!” God is sovereign, I get it. But this hardening of hearts thing is troubling. Does God harden hearts because He knows that Pharaoh is a lost cause? Was Pharoah the one that walked away, and God, in his foreknowledge already knew? But this problem will come up again and again throughout the Bible as we grapple with God’s infinite knowledge and my finiteness. Did God choose me, or did I choose him?
As we continue, the Pharaoh finally relents after losing his first born. A footrace occurs and the Pharaoh loses his army to the sea. The children of Israel now head into the desert and immediately begin crying about how bad they have it. Literally 3 days into the wilderness they demand fresh water and want to kill Moses. A month later they are back at the mountain where Moses started and receive the Ten Commandments (and a golden calf) and the beginnings of the Law underpinning all of the Old Testament until the completion of the end promise of the coming sacrifice that will put to end all sacrifice. And so we see that Genesis is the telling of the creation story. And Exodus is the telling of the story of how we received the Law.