So there’s some controversy over my latest game affair.  Apparently two guys over at the ridiculous fishing team created a game called threes.  It’s a good game.  But at $1.99 it was well loved but quickly got surpassed by the clones the quickly arrived looking for an ad buck or two.  After threes came 1024 – which I personally can’t stand.  And then 10 days after that came 2048.  If you’d like to watch the original threes creators cry over their spilled milk you are more than welcome to do so here.

[pullquote]2048 is sort of a sudoku on speed.  Simple in concept but truly difficult to master practically.[/pullquote]  The board starts with two two’s and you have your first choice to make.  Slide them towards each other and you have a 4 while simultaneously you have another two now on the board.  Combine the numbers without filling the board completely and running out of space. Keep the combos going and you’ll keep the space free and fluid.  Get overwhelmed by the two’s cascading your way? Don’t worry – it’ll be over soon.

When I first started playing I quickly thought I was all that.  I scored a couple thousand points and posed in the mirror flexing my muscles after each subsequent high score.  But then I realized I was about 4% of the games’ potential.  Then I realized there was an underground movement around 2048.

Want a few quick tips to make the game more sane? Pick a corner and a column or a row to settle your big numbers into. Never move that big 512 number out of that corner, ever. Let a 2 get behind it? Just fo-gettabout-it. Don’t duplicate your numbers in your home row either. Got 2 64s that are separated. Consolidate. Its all about space management. When you get a 1024 and a 512 on the board, you need all the space you can get in order to push any further ahead. Promise.

I mean – don’t believe me that you need a strategy? – check out this quick video of a master at work:

I have actually been playing this game for about a two weeks now and have pretty much everyone I know hooked.  I only just beat the game. So it can be done.  But it may just consume you until you do.  Here is my final board : 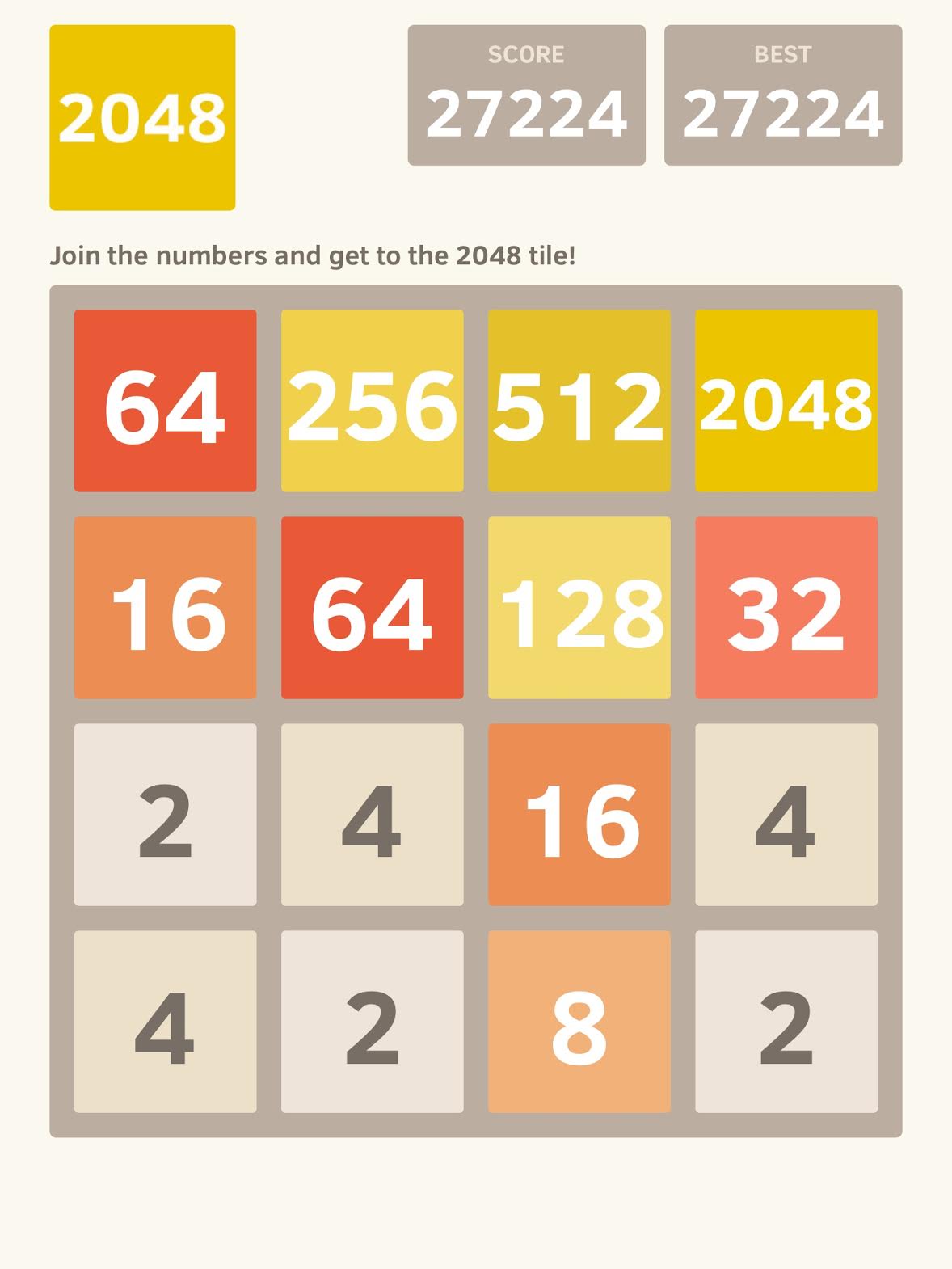 So you might as well give in as well. The great thing is, you have options. The game can be found on both the droid app store for free or in the iPhone app store. Or, because I’m awesome. And I love you guys. No really. I do. You can play it right here, click on the game, and then use your arrow keys to move the numbers left, right or up and down:

Your browser sucks. It won’t work with iframes.