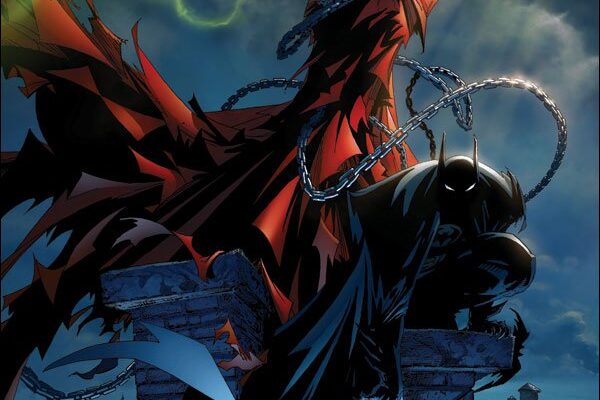 The Death of the American Pantheon

The Death of the American Pantheon

Growing up, I fell in love with comic books as most American teenage males did.  I was a pretty big Batman fan.  No, that didn’t come out right.  I was an amazingly out of control Batman fan.  I walked side by side with Bruce as The Joker emptied Arkham and Bane broke his back.  I was  there as Robin died.  As a new Robin was recruited and died again.  I saw as the books turned darker and darker… the epitome of noir.  And watched as the comic printing presses just pumped more and more books into an already over saturated market.  I’ll get back to that point in a moment.

But my real focus, my main interest, was in following particular artists and writers.  My favorite writer was definitely Frank Miller who has only recently come out into the mainstream with the movie version of his book 300 and Sin City.  The book that catapulted him into my life though was The Dark Knight Returns, wherein Bruce Wayne and Clark Kent are much much older.  Long past the point they should have retired.

And the artist the just blew my mind – still does to this day – was Todd McFarlane.  Todd started off drawing Spiderman.  And it was always obvious when he was doing the pencils on that book.  Spiderman just blew off the page.  No one drew Spiderman like McFarlane did.  Here, just because I can’t control myself, take a peek at this Batman Spawn Cover created by McFarlane: 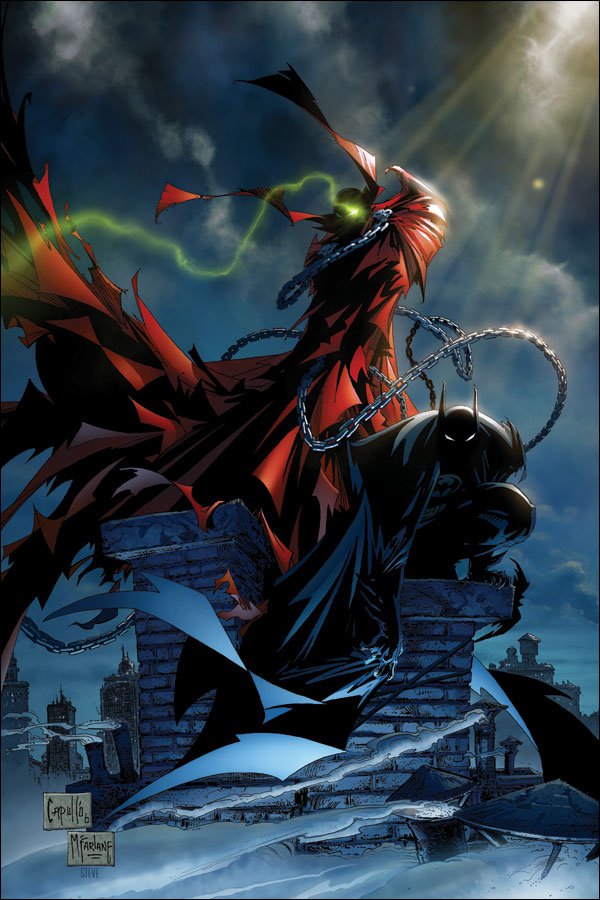 Todd McFarlane began drawing comic book heroes in high school. He began to submit drawings to editors at a variety of comic book publishing companies. McFarlane received hundreds of rejection letters before he caught his big break with Marvel/Epic Comics.  He eventually worked his way to the top of Marvel’s artist roster. Marvel gave McFarlane a title that he solely could write, pencil, and ink: ‘Spider-Man’. ‘Spider-Man’ #1 was shipped to stores in September 1990, and became the best-selling comic book of all time, selling more than 2.5 million copies. Following this incredible success, McFarlane decided to leave both Spider-Man and Marvel in August, 1991 to form his own publishing company: Image Comics.

I would posit today that the heyday, the true pinnacle, of the comic book pantheon was with Todd’s move to create his own edition of Spider Man.  Not only did Todd draw some of the greatest pencils ever in the comic world, he also invented Venom.  And then when McFarlane went off to develop his own comic book label, Image, is when we saw the rise of the independents in the market.  Up until that time the DC’s, Marvels, of the world had a monopoly on the comic book stands. But these big businesses had strangled ingenuity and rapid development.  But Image changed all that by putting the artists back in control of the books.

Thirty years later and where are we?

Last night I watched two comic book movies and wanted to comment on them here.  Being a huge comic book fan, with hundreds and hundreds of Comics plastic sealed and hidden away, you would think that I would be the worlds biggest fan of these new Marvel world of movies.  That I would be out there standing in line waiting for the next one to come.  (The Lord knows I’ve done my share of long movie line waits – for starwars alone I’ve probably waited in line over 200 hours for tickets.  If not more.)  But alas, that isn’t the case.  And not only am I not a huge fan, I also think that they these movies could be the destruction of the enormous pantheon of our America gods.

So, I started with Captain America.  I had heard that it was sort of about Obama, and his drone policy of assassinations, etc.?  That it had a great sub-text going for it.  So I was pretty pumped.  Not pumped enough for the theater mind you – but just enough to download it from my couch anyway.  So how was it?  I got about 20 minutes into it and turned it off.  I didn’t understand the references that were kicking back and forth and thought that maybe there was some sort of undercurrent I didn’t understand.  Turns out there was… its called “The Avengers”.  I didn’t watch the Avengers.  Well, that’s not true.  I did watch it, but it was while riding a bus at 18,000 feet in the Andes Mountains of Peru.  And let’s just put it this way, it was just eye candy at that point.  I had no idea what was going on.  So to learn that I had to watch Captain America 1, and then The Avengers, to understand Captain America 2??!?  I was more than a little horked.  Besides, it seemed all kinds of cotton candy to me.

At that point I had time in the night and decided to try another movie… so I idiotically picked up and started watching Spider Man 2.  Right.  Oh my good lord in heavens was that a bad idea.  More of the same, only much much worse.  Not only did I not remember that this was the second of a reboot of a reboot, but I also forgot that the first one was completely forgettable.  Spiderman looked like a rubber dog toy, not a super hero.  The writers couldn’t think of a single refrain inside the Spiderman universe than the whole, oh, no… Mary Jane’s in trouble because bad guy X knows my name refrain.  Sure, it’s Gwen in the new movies.  Whatever.  Just because you can throw hundreds of millions of dollars at special effects doesn’t mean you can skip out on the writing.  I mean, seriously.

Gone are the halcyon days of Christopher Nolan and The Dark Knight I suppose.  I wonder if Nolan could be convinced to write an edition of Batman or two?  Sorry, I just got chills thinking about the possibilities.

Anyway, all that spin up to just say this one simple comment.  Marvel is going to melt down the entire market for ALL super hero movies… which will in turn cause a backlash against CGI and lame, non-physical special effects.  I promise you.  The cronies at all of the big budget comic studios are only seeing piles and piles and piles of green.  Can’t blame them.  They have started creating movies like they have always been making comic books.  Drag the consumer through as many tentpoles as possible to understand the basic story.  Churn out as many movies as possible in as short a time as possible.  Create great special effects and art at the expense of the story.

I’m already on the record to get way more indie with our Sci-Fi movies.  I’ve talked about how fantasticly conflicted Chronicle was, and how great the writing was  And I’ve spoken about just how confusing The Signal was.  (I have a full tilt expose on The Signal coming soon enough.)  And now I’ve talked about just how much I can’t stand our modern version of our American gods.  Soon though they will be dead.  And I will say, I told you so.  And then we will fund some college student upstarts, and they will blow our mind, just like McFarlane did years ago.  Oh how we need our new McFarlane so very badly.