Ennui is one my favorite words of all time. Only Suprasubliminal, coined by David Foster Wallace in his magnum opus Infinite Jest, out sprints Ennui. Ennui defines the zeitgeist (another great word) of our culture. Ennui clearly diagnoses the mental termites gutting the sanity of our age.

en·nui – /änˈwē/
a feeling of listlessness and dissatisfaction arising from a lack of occupation or excitement.

I’ve been thinking about him, his death, and this issue since I inadvertently Chromecast his suicide into my living room a week or so ago. Remove the celebrity from this situation – which is obviously impossible to do – and there will be around 40,000 others that will erase themselves from the map over the course of 2014.  De-mapping now accounts for more deaths than does car accidents, which is somewhere in the 32k range +/-. 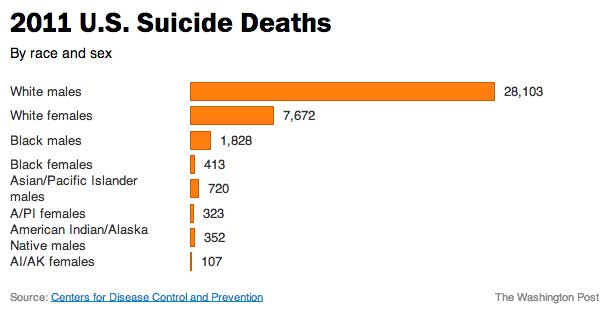 But more specifically, and more frighteningly, middle age caucasian males account for over 28,000 of those deaths (at least in 2011 anyway.)  This demographic of suicides have increased over 40% over the past ten years. Caucasian females have also seen 70% rise, but while high their 7,672 is significantly less than that of white males.

The New York Times has noted the rapid increase in suicide rates over the past ten years.

“Dr. Arias noted that the higher suicide rates might be due to a series of life and financial circumstances that are unique to the baby boomer generation. Men and women in that age group are often coping with the stress of caring for aging parents while still providing financial and emotional support to adult children.”

Experts across the board are blaming the suicide explosion on the economic down turn.  They are also conjecturing that older males are coming face to face with the fact that their dreams and realities they assumed would come true had in fact not come to fruition.  Physical, mental, sexual decline all coupled with a financial down turn could be the contributing factors that lead a person to commit suicide. 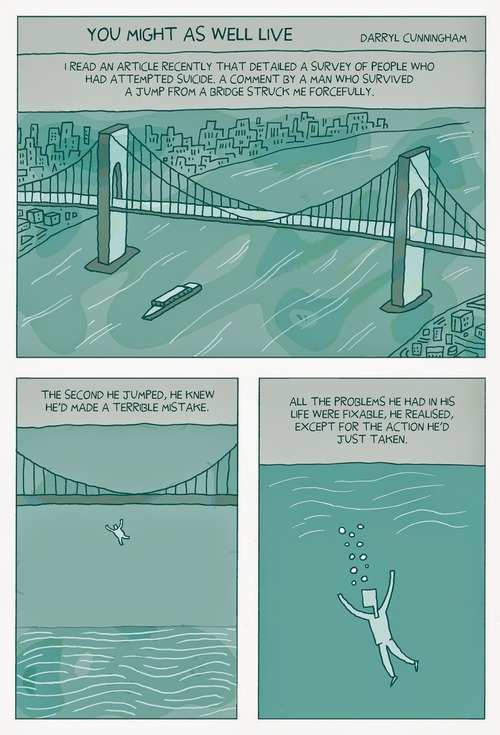 “There may be something about this group, and how they think about life issues and their life choices that may make a difference.” Stated Dr. Aria in this Washington Post article talking about the problem.

Listlessness.  Dissatisfaction with ones life.  Hopelessness.  Depression.  A serious regret at the course one’s life has taken.  These are the real serious causes of our rapid and surprising increase in the rate of suicides in this country.  But all that makes perfect sense.

We, as a society, have killed god.

Nietzsche: “God is dead. God remains dead. And we have killed him. How shall we comfort ourselves, the murderers of all murderers? What was holiest and mightiest of all that the world has yet owned has bled to death under our knives: who will wipe this blood off us? What water is there for us to clean ourselves? What festivals of atonement, what sacred games shall we have to invent? Is not the greatness of this deed too great for us? Must we ourselves not become gods simply to appear worthy of it?”

We have all subscribed to this philosophy of Nietzsche… of the death of god. It was necessary to kill him as we did not want a sovereign over us.  Any moral code or law that would bind us or hinder us.  But we, like Nietzsche, have had to reconcile the fact that we have killed him, or subverted him. What do we do now in the face of this truth?

Well, our society, in an attempt to fill this gaping hole, this gash in our hearts (this God shaped hole, as a Pascal so eloquently stated) we have entertained ourselves to the max.  We have become lords of business and of entertainment.  We have achieved and fought and floundered, mainly because this has been nothing more than a drug to fill the pain that is still there, simmering, just beneath the surface.

I actually get suicide.  De-mapping oneself.  I had a friend and business co-worker commit suicide several years back now.  He was trapped, and his struggle for change did not yield the hopes he was dying to see in this life. And so he opted out.

We are the cause for our own astronomical suicide rate.  It is us, and our failed philosophies that are causing the stratospheric rise in these senseless statistics.  But if you were to search for “Robin Williams Suicide” you will see pages and pages of pontifications about better depression medicine, psychological treatment, and the like.  Nietzsche himself went insane under the weight of his on philosophical tapestry.  When we rise up and war with God, this is the natural result of our misgivings.

What I am saying is about as unpopular as it gets.  Don’t get me wrong.  I love, loved, loving, Robin Williams.  My favorite movie of all times is Good Will Hunting.  So when I learned of his suicide, it pole-axed me where I stood.  I am not saying that his death isn’t terrible… or that we have lost a dear loved one.  We have.  What I am speaking to is the layer beneath the layer.  The layer beneath the depression medication, psychologists and the search for meaning in a terribly lost and confused world.  The thing I am saying is that the reason we have lost our way is because we have attempted to kill God in response to our own pride and prestige.

But when a society kills the one true hope and meaning in a meaningless world then we are all left with nothing but the abyss.  Solomon, the great author of Ecclesiastes said in chapter 1

“Meaningless! Meaningless! Utterly meaningless! Everything is meaningless. What do people gain from all their labors at which they toil under the sun? Generations come and generations go…All things are wearisome, more than one can say. The eye never has enough of seeing, nor the ear its fill of hearing. What has been will be again, what has been done will be done again;there is nothing new under the sun…No one remembers the former generations, and even those yet to come will not be remembered by those who follow them.”

Right?  If we stare deep into the abyss, and it begins to stare back (as Nietzsche said it would) what are we left with then?  Everything is meaningless in light of the fact that we will be forgotten – even Robin Williams will eventually be forgotten.  Isn’t that the epitome of hopelessness?  Can this society create a remedy that will rectify this gaping hole in our lives now that we have killed god?  Is it just more entertainment? One more larger experience.  More bucket list items checked off?  Or should we turn to drugs and alcohol to salve this deep deep pain we all have?

Doesn’t this universal and pervasive hopelessness of even those in our society who have “made it” seem to indicate our society’s maxims and philosophies are intrinsically broken?  Doesn’t this hopelessness indicate the failure of its foundational prospects?  Wouldn’t we see more fulfilling lives and more of an equilibrium if our society had any sort of a semblance for what really is worth while?

Matthew 11 – “Come to me, all who labor and are heavy laden, and I will give you rest. Take my yoke upon you, and learn from me, for I am gentle and lowly in heart, and you will find rest for your souls. For my yoke is easy, and my burden is light.”

A teacher’s “Yoke” was his philosophy or his precepts.  To take a teacher’s yoke meant that you would subscribe to his teachings.  Jesus, in Matthew 11, was basically saying that if you followed his teachings that you would find the ultimate rest and peace.  A rest from the weariness of this society and its struggles.  A rest from the rat race that we mistakenly find ourselves in, in order to make sense of this madness all around us.  The madness of pervasive suicides.  The madness of this hoplessness and uncaring world we find ourselves in.

And so I bid Mr. Williams a fond farewell.  I did not know you, and yet your movies made me smile.  Yet, I only wish that I could have shared with you these words from Christ who spelled it out so clearly 2,000 years ago so that he could have found rest for his soul before the darkness and depression overcame him.  You will be missed sir.  You will be missed.