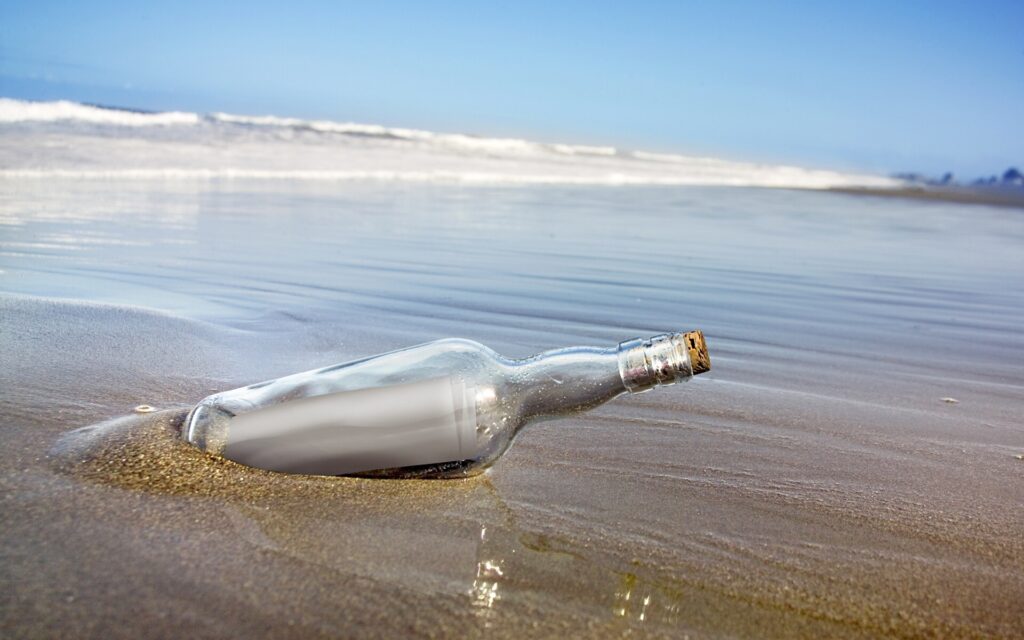 A Modern Message In a Bottle Would You Open It?

So I recently decided to conduct my own modern message in a bottle experiment. I was listening to Radiolab and I was thinking about just what makes a thing great. You know. What makes someone continue listening when they wouldn’t have normally? What do we find entertaining? And not only what but why? And I realized that it’s the audacity of a thing. The curiosity to learn what will happen next. Right?

Like for example, if I told you that I tried busking for a day… And I knew exactly what the people who found themselves busking for a living were thinking while the people walking by on the streets Would just kept going… Would you stick around to find out?

Or better yet, I’ve been considering creating a cardboard sign that read “help! Stuck in Colorado Springs… Trying to get home to my wife who is dying of a terrible toe fungus… Anything will help.” And then to stand at the road near a mall or a shopping center for an entire day. And to also interview every other fellow sign wielding beggar to see how their experience matches up with mine. Would you be curious to know what I would find?

But it’s the audacious and the unexpected that I surmised would create a good reader experience and cause people to keep reading.  Right?  Asking questions everyone asks in their head but is too afraid to ask in reality.

So as I thought about it more and more I thought… Maybe I should conduct a modern message in the bottle experiment. It’d be great. Everyone loves messages in a bottle. They are filled with intrigue and insight. They hold wonder at where the message came from and how it possibly came to be in your hands? Right?! How could that idea go wrong? 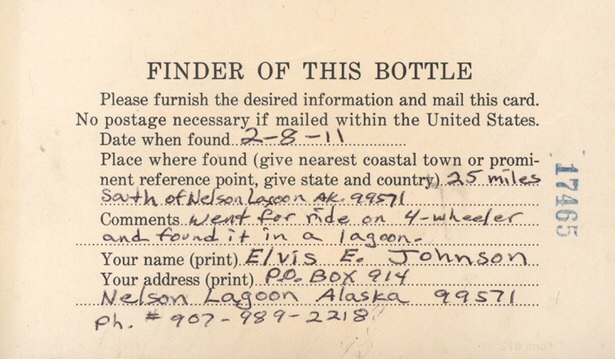 Above is the world’s oldest message in a bottle.
It was circling the North Atlantic for 97 years before it was discovered and reported back to the Lab that was conducting the science experiment that released the bottles so many years earlier. So as I began contemplating exactly how I would conduct my own modern message in a bottle experiment I needed to decide what I wanted to say to the people receiving the message. I needed to formulate questions to ask in hopes that the receiver would respond. So I thought and thought and came up with 12 questions:

Question #2: Where are you from? (Whatever that means to you.)

Question #3: What was the last movie/book/play that made you laugh or cry?

Question #4: If a 10 year old version of you were here with us, what would you most want to tell them?

Question #5: Do you believe in God? Why or why not?

Question #6: Who is the person that you’ve lost contact with that you would most like to speak to now?

Question #7: If one day you woke up and the world was empty, where would you go and what would you do?

Question #9: What is the compliment that you would most like to hear?

Question #10: What is the best thing about you?

Question #11: If I said to you “everyone really appreciates the things you do”, what actions of yours would you think I was referring to?

Question #12: What Question do you wish I had asked? And what is the answer?

And then I need to figure out how to release the messages into the wild.  Post it on bulletin boards?  Make phone calls?  Stand in front of the mall and hand out flyers?  And then I thought, well, I could create a blog and just add the questions there for anyone and everyone to respond to.  And then I thought, heck.  Its random enough to get someone to respond to a post they love, let alone ask them to answer a pile of questions.

And then I had the worst idea I’ve ever had.  I’ll email them.  Yes, that was a terrible idea.  But I didn’t realize just how bad it was yet.  I had a bigger problem on my hands.  How do I get random individuals to email them to?  I then stared at a wall for 12 seconds until I realized that I just needed random names, and the odds were I’d get a hit if I sent to them to an email system big enough.  For example, I just ran a random generation of a name and came up with:

So, I created a list of names, and then I emailed them directly.  And I did that to over 1,000 people.  By hand.  From my gmail account.  Yeah, I know – kinda ballsy.  I told a few friends of mine what I had done, and the unanimously said, that’s crazy stupid.  But they couldn’t really tell me why.  I mean, besides the fact that its never done.  I even sent the survey off to friends as well.  What’s most interesting is that exactly how many of the emails went to legitimate email accounts.  The randomized name trick worked for over 92% of all emails I sent.  Only 8% of the messages bounced back to me.  Now, it could be that some of the accounts had fallen into disuse.  But even if the emails only got to 500 (or 50%) that’s still a lot of people who received my message.

So are you curious as to how many people opened the message?  Yeah.  Me too.  Would you have opened that message and responded?  No.  You wouldn’t have.  And here’s why.  Not one single person responded.  Not ONE.  To be clear, that’s lower than a spammer’s response rate, which generally runs at about a half a percentage point.  I got ZERO.  Maybe it was too long?  Maybe it was too personal?  Maybe it wigged people out?  But seriously, don’t people like talking to one another anymore?

When I was 8, the song 867-5309 was a huge hit on the radio.  And so, I picked up the phone and called the number. Just like that I had an hour long conversation to an uber nice guy that happened to pick up the phone.  AN HOUR LONG CONVERSATION.  If some kid picked up the phone and called your cell phone, would be nice enough to chat with them for an hour?  I remember him asking about my life and what I hoped to be.  And I remember learning about his kids and his family.

So I figure I would eat a bit of my own dog food here and answer my own questions for you.  And if you read this post, and would like to push against this sort of selfishness and you would like to share your own answers with everyone in the comment section I would be honored:

Question #1: What do (did) you do for a living?
I am web development manager. I build web stuff for a living. And I enjoy it.

Question #2: Where are you from? (Whatever that means to you.)
I am from California, Maryland, Colorado, Chicago, and England. I’m from a lot of places.

Question #3: What was the last movie/book/play that made you laugh or cry?
Easy.  The Fault In Our Stars made me both laugh and cry.  It was a gorgeous movie.

Question #4: If a 10 year old version of you were here with us, what would you most want to tell them?
I think I would tell him that he’ll do great. It’s bumpy. And a little crazy. But just keep turning those little wheels of yours. It’ll all work out in the end.

Question #5: Do you believe in God? Why or why not?
I do. For a very simple reason really. Because I know that I can’t do it. Because I know I’m a mess and have really really bone headed it throughout my life. Because at the end of the day I need someone to save me.

Question #6: Who is the person that you’ve lost contact with that you would most like to speak to now?
Holy cow easy. I’m dying to find a kid named Troy Allen. We attended Santa Fe Springs Christian School together. Anyone know where he is, or where his family is, there’s a reward in it for you if you help me find him! No really. Seriously. He and I pulled off some awesome chaos back in the day. Would love to find him if he’s still alive that is! haha.

Question #7: If one day you woke up and the world was empty, where would you go and what would you do?
Oh, fascinating question – where’d you come up with it? (snicker) I would run around London like they do in 28 Days Later. That would be awesome. Loved that section of the movie. Always wondered how they pulled that off.

Question #8: What’s the bravest thing you’ve ever done?
Ok, hard question. I stood up for a friend’s sister once, back in the day. Not sure why they were picking on her. Or the circumstances. But it landed me a bloody nose. No no, better yet, the time a guy was driving on the wrong side of the freeway and we almost had a head-on collision. I jumped out of my car and stopped traffic, and almost got me killed by two purple haired old ladies who thought I was about to car-jack them. And then I got the other guy turned around and going the right way. Wait, did you say, BRAVE? Or stupid? I can’t remember.

Question #9: What is the compliment that you would most like to hear?
Well, probably I’d like to hear that I’ll do great. Even though its been bumpy, that if I keep turning my lil wheels of mine it’ll all eventually work out in the end. (See what I did there?)

Question #10: What is the best thing about you?
Probably that I care passionately. And that I’m SUPER humble.

Question #11: If I said to you “everyone really appreciates the things you do”, what actions of yours would you think I was referring to?
Maybe that I make a wicked grilled cheese panini? No, that I have flexible thumbs? No, that I can harmonize with most any song? No no, I got it… that I punk people like nobody’s business. Yeah. That’s it. (ok, I’m passing on this question. Its kinda dumb.)

Question #12: What Question do you wish I had asked? And what is the answer?
I wish you had asked me why no one had answered my survey. Because I now know the answer. Its HARD to answer some of these questions. But it was worth it to do it anyway. So if you guys would answer them I’d appreciate it! And better yet, you might learn something about yourself!

I am curious what happened to the messages though.  If you would let me test with your gmail account I would love to try something.  If I could send you (someone I’ve never communicated with) we could see if it defaults to your spam folder.  I have a feeling it wouldn’t.  It was a single message.  It was hand crafted for each person. Anyway. I gave it a shot. Sometimes you try and fail. And that’s ok too.