It is really very rare to find a clever puzzle game in the vein of Myst. The Witness is coming – but man, are they taking their good old sweet time. So in the mean time, I went off and decided to find out if there were any other games out there that would be similar… and sure enough, We have Pneuma.

Pneuma starts out in darkness, and the world begins to take shape at the command of the narrator’s voice, which is a playful British guy who really does think he is god. But outside of the games quiet music and the musings of the British narrator, it is actually a fairly quiet and thought provoking game. Remember wandering around Myst and just experiencing the beauty of the CG and the gorgeousness of the environs? That is exactly what its like to play Pneuma. Here, check out some of these fantastic levels and puzzle environs. 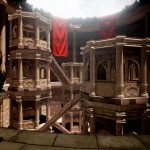 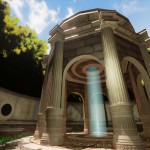 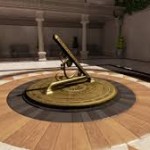 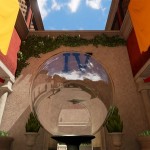 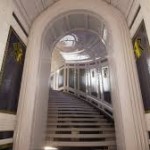 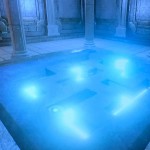 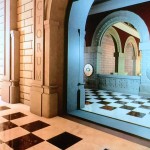 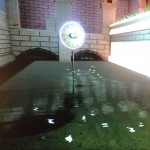 The actual game play isn’t that hard. Usually as you enter a new puzzle you have to think for a moment… hrm… what is happening here. And then it will click. Many of the early puzzles require you to stare at a button and then move in the appropriate direction to get the door to open. Or it will require you to look at buttons in the correct tune order. Or maybe just finding the switch than aligns the button with where you need to stand to escape the room you are in. The complexity isn’t too hard, but will require you to think a bit to make your way to the next room.

What is missing is the larger story. Myst mastered that aspect of the game. You needed to find the pages of the book to free the creator from his trap. And it was one of his sons that had ultimately imprisoned him. So there was a purpose and a goal – a story that unfolded in the form of videos that you unlocked as you went along. There is nothing like that – no larger story – save to find out if you are in fact a god or not.

But its still a very fun little game. The worlds are therapeutically beautiful. The puzzles are clever, if a little on the easy side. The game is a nice change from the normal first person shooter world. There are no guns. There are no people. And in that respect it is very much like Portal… minus the portal gun. But I have enjoyed it very much mainly because it is a different experience than the normal world of games that we are given. So kudos to the Pneuma team for their pushing back against the norm.

If you’d like to get the game – you can get it on Steam (Mac and PC) as well as on the Xbox One as well.