All short films should be as good as Nils Vleugels Rotor. When you only have five to ten minutes to wow a viewer you have got to nail it. And Nils and team definitely have done that with Rotor.

Its hard to mess with someone’s head in a short film. At least effectively. We’ve seen it done before with Burnt Grass, Memory 2.0, and Everything, Everything, and Everything. But still, its really very rare to get really great quality mind bending story telling in the short world. But Nils has definitely done it with Rotor. Here, why don’t you check it out and tell me what you think?

Come on? Goodness and light. I like the psychology of the film, and the feel and mood. I love the vibe. But most of all you have to just totally dig this aesthetic. The feel of Soviet Russia in the console display, the cement and the nuclear power plant feel going on. Rotor has a very big budget design feel to it, and I just really think the sets are super well done.

Anyway, Nils was nice enough to chat with me about the movie and to talk about how it came to be. 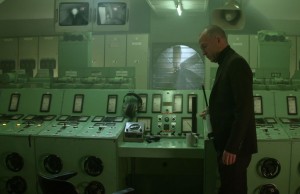 THinc. – The opening shot of Rotor is so very evocative… the strange shaped tunnel, the flashlight, the lone man walking through… did the script define the location and the environs of the short or how detailed did your script go?

Nils – Yes. So I have to give absolute credit to our great DoP Mick van Dantzig for this one. My script originally opened with the nightguard making himself coffee, as shown in scene two. Mick recognized that we needed a better more visual opening, and he was very, very right as the scene serves as a great set up for what is to follow in the rest if the film.

THinc. – Nils, you wrote the script for the movie and yet, I think maybe there was only a handful of words in the entire movie. How did you write this out? Do you have a copy of the script that we could see? That would be awesome, though I’m guessing its in Dutch?

Nils – I wrote out all the scenes pretty much exactly as pictured in the final result. Because i din’t want the script to be solely cut and dry descriptions of action, I tried to focus on setting the tone for the eerie atmosphere. This meant describing the rooms, sounds, really trying to make the words come alive.  The script is written in Dutch so you’ll probably have problems to make something of it 🙂 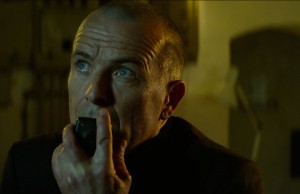 THinc. – Hahah! Yeah, I definitely don’t think it’d be very helpful at all… to me anyway. I am American. And as such we are required to only speak one language! hahaha. Thanks for the offer though.

Nils – I wanted Rotor to contain little dialogue as it was the first short we produced, I aimed to transcend lingual barriers. Dutch is a very small language and I wanted to the film to be enjoyed by a wide international audience.

THinc. – The idea of Rotor is very very clever. How did the idea come to you and how did you make certain there weren’t any loose ends?

Nils – Thank you! The concept of a time loop has always been very interesting to me. I remember watching La Jetée and Twelve Monkeys in filmclass at university and absolutely loving it. So when I set out to write something which was cost efficient and self contained the idea of a loop came pretty naturally.

I’m actually not certain of there aren’t any loose ends still there. One of the websites that posted Rotor, i think it was io9 had a commenter who in detail scene by scene described why the time loop in Rotor doesn’t work. I think that’s very funny as he was probably totally right. I also really love that someone takes the time out to analyze something we made. Its a compliment to the work (in a weird way).

The cool thing in the reception of Rotor has been the different interpretations of people as to which version of the night guard kills which. To me it was always very simple and straight forward, but it turns out its open to discussion. Which is really cool. 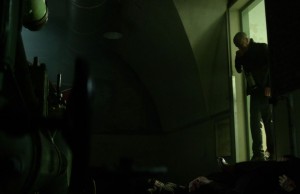 THinc. – Yeah, we do a lot of that kind of analysis here on taylorholmes.com – a few examples would be our 100,000 word Memento discussion, or our 70,000 word Prestige civil war. hahah. So I wouldn’t be too surprised if someone here took it upon themselves to do a tear down of your fantastic movie. (I mean, maybe I will… hehe.)

Now, I have to say, that I’ve never seen better locations used to such amazing effect – the closest might be Einar Kuusk’s Beautiful Day – but that control panel is something straight out of the cold war. Its amazing. The lights, the buttons, the fan, the cement and the hallways. Just amazing. Did the location drive the story, or did you scout out locations that fit your story? How did you find this place?!

Nils – We actually had a very different location up until a week prior to shooting. It was an old, huge abandoned factoy. The place however turned out to be contaminated with asbestos, so we had to rapidly find a new location.

THinc. – Asbestos?! Disaster! Oh no. But it definitely worked out eventually. How did it eventually come together?

Nils – We came across the spot with the control panel, which served as the electrical back up for a defunct naval base and is located in Den Helder. It’s now a monument and we immediately loved it. The fan wasn’t there originally but our production designer Lars van Overbeek bought it somewhere an placed it there.

We still did’t have the long hallway, so as we mentioned this to the owner it turned out he also ran an Napoleon era fort right across town. That’s where the long underground tunnel as show in the film is located.

The funny thing is that the atmosphere of Rotor is very much dictated by the location and we would have had a vastly different film of not for the asbestos.

THinc. – I read in an interview that everyone volunteered to make this happen. Was it just a labor of love on everyone’s part to get Rotor made? How did this come together financially, even cheap short films are still fairly expensive?

Nils – The director Maarten Groen and I run DPPLR, a production company. We mostly work for advertising agencies and produce commercials. We try to make something for ourselves at least once a year and ask a lot of the crew members and rental agencies we work to help us out. Which they do a lot, of which we are very thankful.

It helps that we also employ a post production unit, which meant that they could work on the visual effects and montage in the downtime of their work. The sound design was completely build from scratch by our friends at KlevR and the music composed by Niels den Otter of Audentity.

THinc. – I read that you are working on a film called Vleugels I think? Which is about a young girl who sees a man commit suicide, but assumes that he knew how to fly? Such a gorgeous idea for a script. Is that progressing, where does that stand today?

Nils – Haha, its actually called Vliegen(flying). Vleugels means wings which is actually thematically really close! (and also happens to be my last name)

THinc. – We have already stated fairly clearly in this interview that Dutch, (or really any language at all other than English) is not going to be my strong suit. Hahaha. Oh well. Thanks for being kind regardless!

Nils – We are currently still in post production. DPPLR has had a very busy summer, which is quite unusual as production mostly shuts down during the summer period. This means that we haven’t gotten around to wrapping up the final edit. The version we have now is great though, and the young girl who plays the lead does a tremendous job. We are aiming for it the hit festivals next spring.

THinc. – Well we are excited to see what you do with it. And I promise no one on my site will mention it to anyone else if you decide you just want to show it to us exclusively. Promise! hahah.

Thanks so much for taking time out to chat with us today Nils! You are a ton of fun to chat with – but better yet? Your English is amazing! hahah. Take care my friend.