Joshua Cohen. Let’s begin there. Joshua Cohen has been hailed as the heir apparent to Thomas Pynchon. Nay, the word heir has even been bantied with regard to Cohen and even David Foster Wallace. (Stops, genuflects, crosses himself, clears proverbial throat, and attempts to proceed like nothing has just happened…

Anyway, Cohen’s Book of Numbers is a hot mess. Here’s just a snippet of the New York Times review of Cohen’s fourth book…

Cohen makes no bones about his impatience with conventional narrative — he, or rather his fictional stand-in (also named ­Joshua Cohen), announces his disdain for the dusty tropes of the novel on the first page: “There’s nothing worse than description: hotel room prose. No, characterization is worse. No, dialogue is.” Unsurprisingly, on those counts, “Book of Numbers” is sometimes a hot mess.

Oh, don’t get me wrong. I adore convention busting authors – like the recent winner of the Manbooker, Marion James and his Brief History of Seven Killings – I want nothing more than for authors to write 7 page sentences. To write and write and write and then just have the novel end (Marion has said this about his own book… both things, to be clear.) Blow it up. Heck, even begin a sentence with a preposition. Destroy Tokyo – (like Godzilla… that isn’t a racist thing. Oh never mind.) do your thing and let the rest of the world suck it. Just be real in the process. Say something. 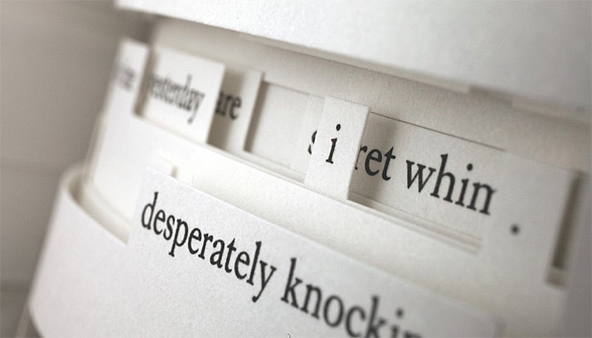 I remember when Foer was the first novelist to include 9/11 embedded into the sights and sounds of his novel, Extremely Loud and Incredibly Close. Everyone screamed too soon. And yet Foer nailed it. I balled like a schoolgirl throughout. I just couldn’t handle the tension of these unveiling voicemail messages descending into the story with regularity until at last we hear the last message. Undid me. It was beautifully played by Safran Foer. Similarly, I think modern novels are so burdened by technique and by approved systems and approved methods… that we get nothing new said. But there are a rare few, a very very rare few who can delicately string TNT to the flying buttresses of the towers of the literary towers, and bring them violently down for a purpose. Bring them down for a larger goal. Or, better yet? What about his Tree of Codes book, that book printers said was physically unmakeable? That’s an amazing story in and of itself.

All that to say, authors that are able to find new ways to break down barriers between themselves and the stories are fascinating to me. Whether its via interesting writing styles or new typography or just inverted and upside down plot stories that flip back in on themselves, I just find that expressing truth, and hearing something new is easier in these new cutting edge formats. Which brings me back to Joshua Cohen… remember him? The heir apparent to Wallace? (Cough). Right. Well, he is writing a five chapter story online, live… right now. Well, from October 12th through to the 16th anyway. Joshua is writing 5 hours a day, and that, as they say, will be that.

So from a confession standpoint, I have been spending an inordinate amount of time hanging out and lurking (and yes even chatting (yes, there is a chat window to the right of the writing that Cohen is doing)) with the tide of ebbing and flowing visitors that have come to gawk and question what this is all about and ultimately watch an author crank a serialized short story out in 5 days. Oh right, Joshua is also writing… what is he writing?

PCKWCK is a ‘real-time’ serial novel that is a sort of a modern day reinterpretation of Charles Dickens’ first serialized novel, The Pickwick Papers. Which is a clever enough inversion and revitalization of the original in and of itself. But start reading it, and I promise you’ll get caught up in it quickly enough. Ho, wait now… promise is much too strong a word here. If you get into the writing style of Cohen (which is to say Pynchon, Wallace, Franzen, Foer, Eggers, etc) then definitely you will get caught up. Otherwise… just go and gawk a bit. Which brings me to my second point…. 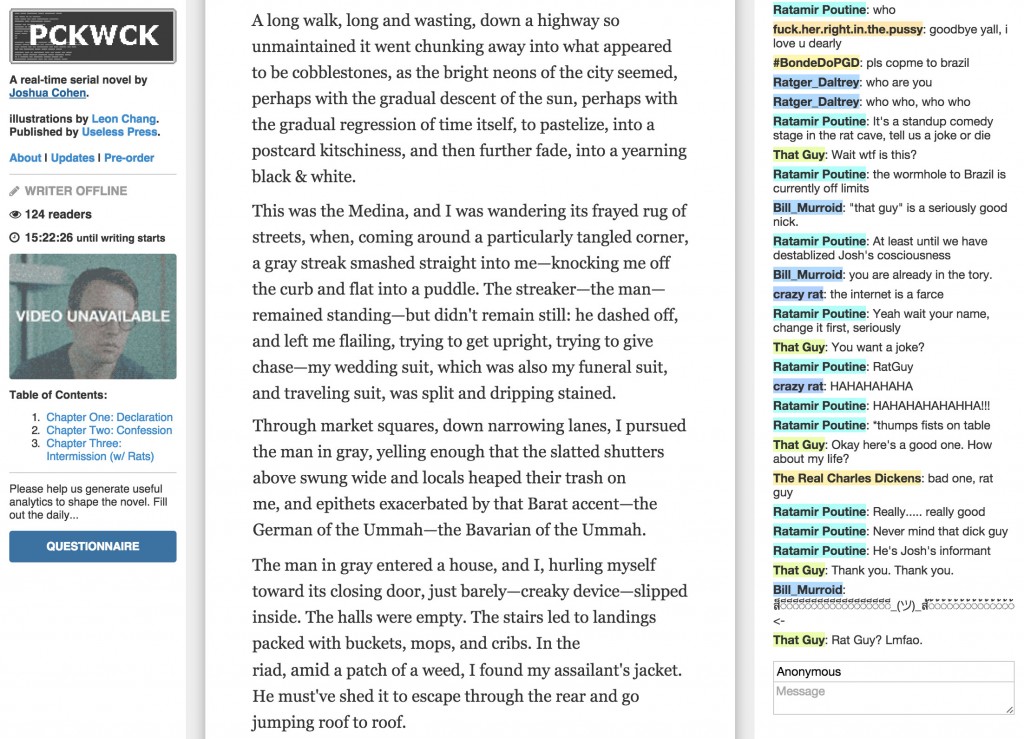 Since when is the authorial duties an art in and of themselves? When did this occur? Maybe it occurred the moment Cohen did it. Well, I know there have been others doing this in smaller scales. Serialization has obviously been going on for hundreds of years. But the real-time nature of it is solely a result of the maturation of the technology. It is, because it can be.

Which is this second larger point. This thing isn’t just a book being written. It’s more about people watching an artist paint. Or a metalurgist … uh, metalurge…? Or what have you. (Which reminds me, I recently got the chance to watch El Mac paint, and can’t wait to write about that. But that is another post for another day.) It has become performance art for performance art sake. And I for one have to say that worst conceived ideas have occurred than this one when it comes to art, if that’s what this is. When I used to participate in NaNoWriMo I would all but write live online. So, its not a new idea. But I think Cohen has reached a level of new critical mass that has launched this idea into the mainstream. How many have the balls to do this? I’m sure not many, as it is a harrowing experience to write while you have people staring over your shoulder. But regardless, the stunt has reminded me of Cohen’s work, and has reminded me there were a number of his short stories and short articles that I had put in queue to read. So for him the marketing play alone was worth it. If not for the sales alone of this particular book. Anyway, go check it out and let us know what you think of the process.

And yes, I know I kept you in parenthetical world this entire post… I figured it would make more sense in retrospect that way. Don’t worry though… I won’t leave you there forever. I shall now set you free.)