Today, in celebration of the 75th Anniversary of the largest blitzing of London, air raid sirens will sound again to commemorate the day. Many have forgotten the massive impact World War II was to London, but it was anything but insignificant. Throughout the bombings, over 40,000 civilians were killed, and more than a million London houses were destroyed. 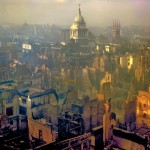 Between 7 September 1940 and 21 May 1941 there were major aerial raids (attacks in which more than 100 tonnes of high explosives were dropped) on 16 British cities. Starting on 7 September 1940, London was bombed by the Luftwaffe for 57 consecutive nights. But the largest of these bombings was on this night 75 years ago.

This photo gives a better perspective of the chaos incurred by the Germans through their Luftwaffe raids. The photo was taken from the top of St. Paul’s Cathedral, a location near and dear to my own heart. My first week in London I stayed at a hostel at the base of the cathedral. And it was this night 75 years ago that fire fighters courageously fought to keep the fires from burning down the cathedral.

All of London has been gearing up to celebrate the blitz, and their survival of said chaos. There have been activities and tours throughout London over the past couple months leading up to today. Tours of Churchill’s bunker (which I can personally vouch for as truly intriguing) and museum exhibits especially for the the anniversary have been well coordinated and planned.

But most of all, I plan to tip a pint in the direction of St. Paul’s today and thank them for all they did to fight the German onslaught before we Americans finally got involved. Thanks chaps, for towing the line and not buckling under. The world owes you a debt of gratitude.