I get new ideas of things to do, to write, to memorize, paint, whatever 20 times a day. I don’t lack in the ideas department. For example, one day 5 years ago, while reading Red Wall book one with my son, I had the idea to write my own version of the series, but with better characters, and more adventure. So I did. A couple months later I had a 90% completed version of the book. Today, my son is actually reading it, editing the plot, and giving me ideas on how to make it better. A couple years ago I decided I wanted to read every book of the Bible just for gits and shiggles and then write at least a 1000 words about what I found there. I’m about 60% of the way through? Maybe 70%? And still going. I was talking with a friend one day and saw a picture in my mind of two people meeting for coffee… and one of them can stop time, or could both of them? And I decided then and there to write a novel about the thought. You can read that novel here. It isn’t a Man Booker Prize winner. But I had fun fleshing the idea out anyway. I am also currently reading the Bible from start to finish to find every question between God and man, or vice versa. I’ve already done the analysis of all the questions between Jesus and man, etc.

Big ideas hit me all the time is really my only point there. Ideas that my mortal frame can’t really quantify the hours or the costs to make them happen.

But then I had this idea. It was a fairly simple idea in concept. (As they all are until I wade in a little further that is!) The idea was this, what if the Golden Gate Bridge bent in the middle? What if the Earth bent at a ninety degree angle right at the halfway point? Hrm. Well, I love playing in Photoshop. I really really do. So much so I recently created a little side business helping people edit their trashed images for them, which I’ll tell you more about here later.

So yeah, Golden Gate Bridge – check. Ninety degree angle. Got it! Simple enough. Except that I’m in about 40 hours of editing and I’m still a long way off. I started off by pulling two random photos of the bridge from two different vantage points. (This was harder than you would think.) And then I went to it. 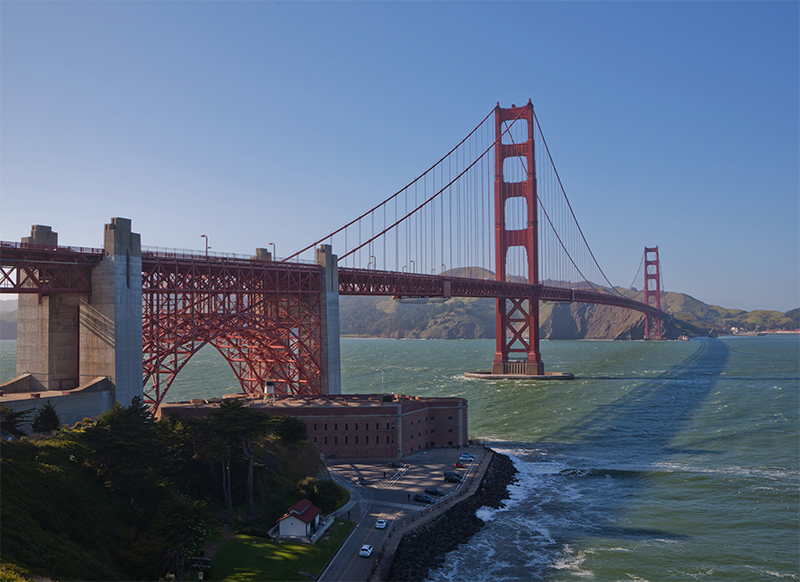 The two photos I started with were enormous. You may not appreciate these figures, but they are over 6,000 pixels long each. I dig data as much as the next guy, but man, I had to dial them down a little bit in order to wrap my brain around them effectively.

This photo to the right is not the photo I started with (that one is long long gone by now, and I can’t seem to find it), but I then cut the bridge in half, and then deleted the sky and mounted a small island where the sky was. That and the sea. I also had to delete all the cables and redo them all by hand as the blue of the sky contaminated them all hopelessly. When something thin like a cable rests against blue it soaks those colors up. And then when you place sea behind those same cables it looks awful. Trust me. So, I went through and painted out the hundreds of the cables, and then re-drew them all. Here, let me show you what I mean. This version of the bridge is somewhere around the half way point. 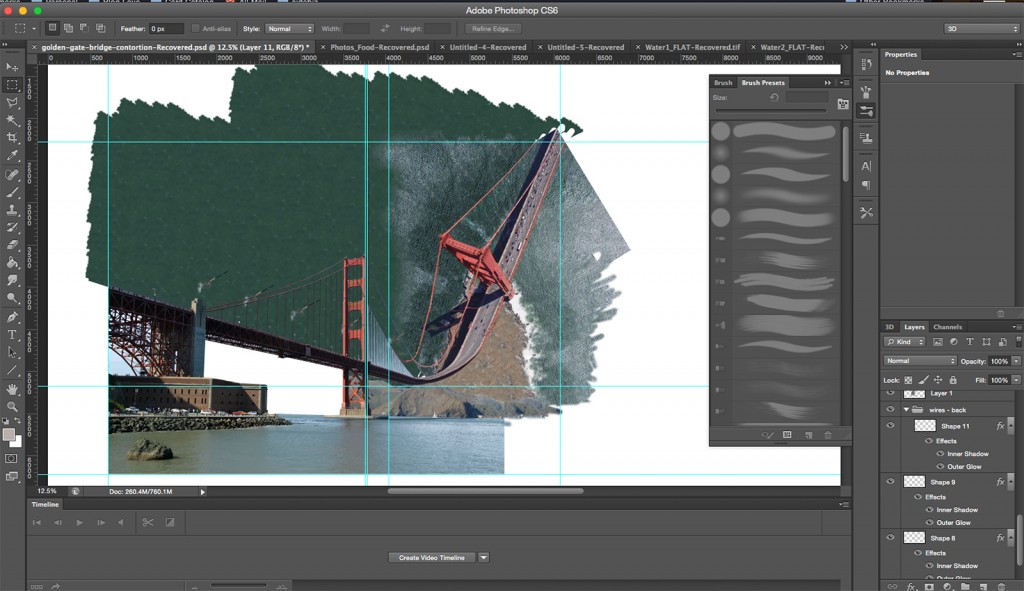 Notice the middle point of the bridge? Where I haven’t deleted the bridge lines yet? All that hazy blue? Yeah, no good. The other section that drove me to drink (literally, this isn’t a hyperbolistic expression) was the bend in the bridge. When you transition from one vantage point to another the mind basically breaks. And I had plenty of difficulty of keeping both realities in line, and delivering a transitional state. But I eventually got the bend squared away. I have since this shot painted in cars and trucks on the bend to help sell the transition. Also, notice the sea that is where the sky was. I have painted all of that in by hand. The water to the left of the painting has yet to be painted in detail yet. Need to show the sun striking the waves, etc.

But then I had another great IDEA. I wasn’t even really done with my first task when I thought, oh man. If only I could pull this off, this thing would be a completely mental head-breaking-print.  The idea was, if I could bend it once, why not twice? Wait what? The way the idea came to me was because the picture as it stands right now is a bit off balance as the bridge vaults into the sky. But what if you (I… what are you doing to my picture?) threw another kink in the bridge? I haven’t begun playing with that bend yet… but you can see here a basic idea of how it could work, and how the second bend really balances out the bridge a ton better.

Anyway, yeah, this is the reason my blogging production has slowed down so much. I’ve been pointing my brain at this massive mind job of a picture. Love to know what you think of it, even in it’s rough state. I really think there are another 100 hours left in this painting before it’s done. But I have enjoyed the distraction all the same. Lots of fun trying to figure it out.