I mean, do we even remember what Modernity was all about? This concept that mankind has awoken to some blissful perfection and some sort of transcendent awareness on how to overcome his historical failings and flaws in order to usher in a new world order? I mean, we’d killed God… and Nietzsche was helping us to usher in this state of reason that had proven we were all gods ourselves. That we were the übermensch… we had overcome, finally. So yeah, seeing as though that is all rubbish… of course we are post modern. And with a post modern dialectic, comes post modern movies, fictions, and poems. Right?

Personally, when I read most books prior to the turn of the prior millennium I yawn a bit. Or giggle. Or giggle yawn. Right? SOME books transcend the modern world views. But most do not. But what about… and what about… sure. Those are the 100 examples everyone uses, and you know them because they transcend. Right? But most do not.

Which brings me to one of my favorite styles of writing that I’ve really gotten into of late, ergodic literature, or cybertext literature. Basically any book that makes you work your ass off to get through it is something that I’m into. A couple of my favorite examples that I’ve talked about here would be House of Leaves by Mark Z. Danielewski, and S by J. J. Abrams. The layers upon layers of truths… and falsehoods, all coalesce into an experiment that most approximates real life? Chaos. Dirty. Gritty. Messy.

Do you guys know of other books like these two? I know that Mark Danielewski has another book that is called Only Revolutions that looks fantastic, but I haven’t read it yet. Obviously J. J. Abrams’ S is a one of the kind book with notes and scribbles up and down the books margins. Conversations go back and forth, conjecturing about the content, with a sense of foreboding that the current storyline is just as relevant and pertinent as the actual book.

Well all that to say – what would it take to create a book like these? You have the idea of a main storyline of the book that carries the bulk of the narrative. In The House of Leaves you have the Navidson Record, which tells of a family that discovers that the inside of their house is larger than the outside. Right? Wah? At first it’s only larger by a foot. But the house only continues to grow and expand … on the inside. Until there is a vast cavern the drills down past the center of the earth, right in the middle of the house. So obviously exploration has to happen. That is layer one.

Go up a layer, and we get a narrated story about a guy named Johnny Truant that begins looking for an apartment. He is a completely untrustworthy narrator, and everything he says is dubious in the extreme. But regardless, he moves to a new apartment and finds a manuscript written by a guy who previously lived in the apartment named Zampanò. The manuscript is an academic study of a documentary film called the Navidson Record. But when Truant searches, he can’t find any record that either the movie or the original family ever existed.

So we have 5 layers now?

And the amazing thing about the House of Leaves as well as S, is that all 5 layers interact with each other and are concurrent yet outside of each other’s timelines. But how do you create a stratified world like this one? Do you create the narration of the “actual events” first? You craft your foundation and the story of your house with the space that expands with a mind for where that narrative begins, it middles, and how it ends. And then do you create your exposition that introduces and teases these narrative elements by introducing the Narrator? And how he found the Navidson Record and his own internal struggles that run in parallel, but over top of the foundational elements? Or, alternatively, does one create something like this out of whole cloth? If so, then it isn’t a book anymore, it becomes a matter of illustration. With that in mind, I thought I’d like to try my hand at a single page of made up, whole cloth illustration like this. 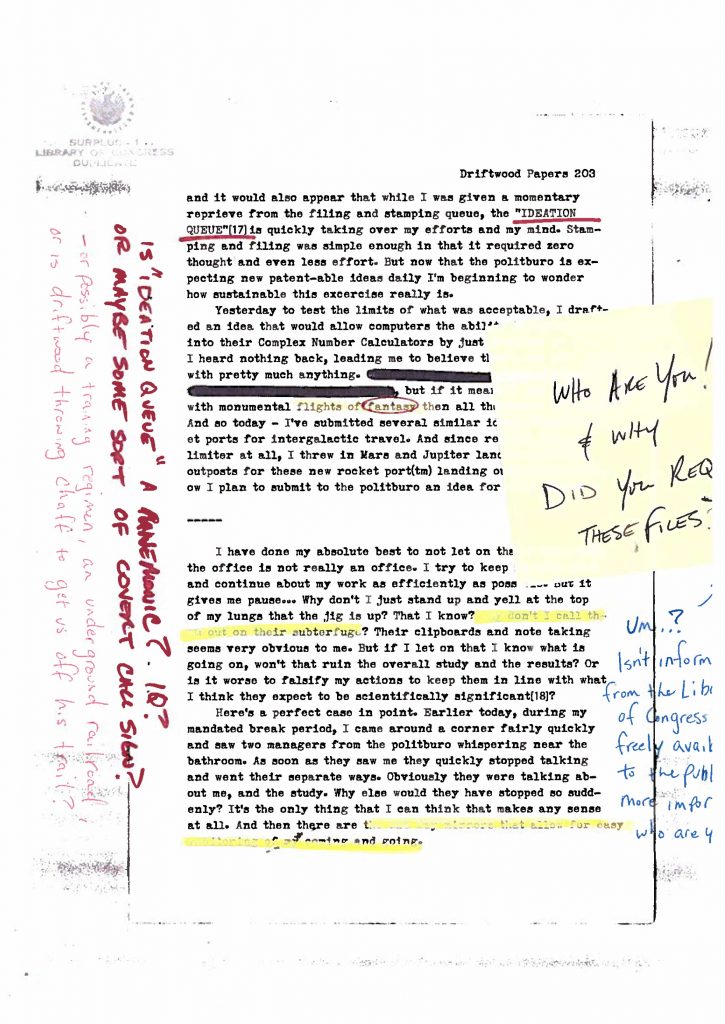 Obviously, this is a rough, of a rough. More of a concept sketch of how something like this could work. I actually did the Driftwood Papers writing in Photoshop, utilizing a typewriter font to give it a real typed feel to it. The idea here is that there is a man who is aware that his work is actually a scientific experiment – every day he heads to the office and is aware that people are constantly watching him and evaluating his response to increasingly surreal requests for him to accomplish. Or, is it an experiment? That was the idea for the memos and notes of these Driftwood files.

The different colored ink and different handwriting styles indicate different times and different people. This was done to amazing effect in Abrams book S, which I have an example of below: 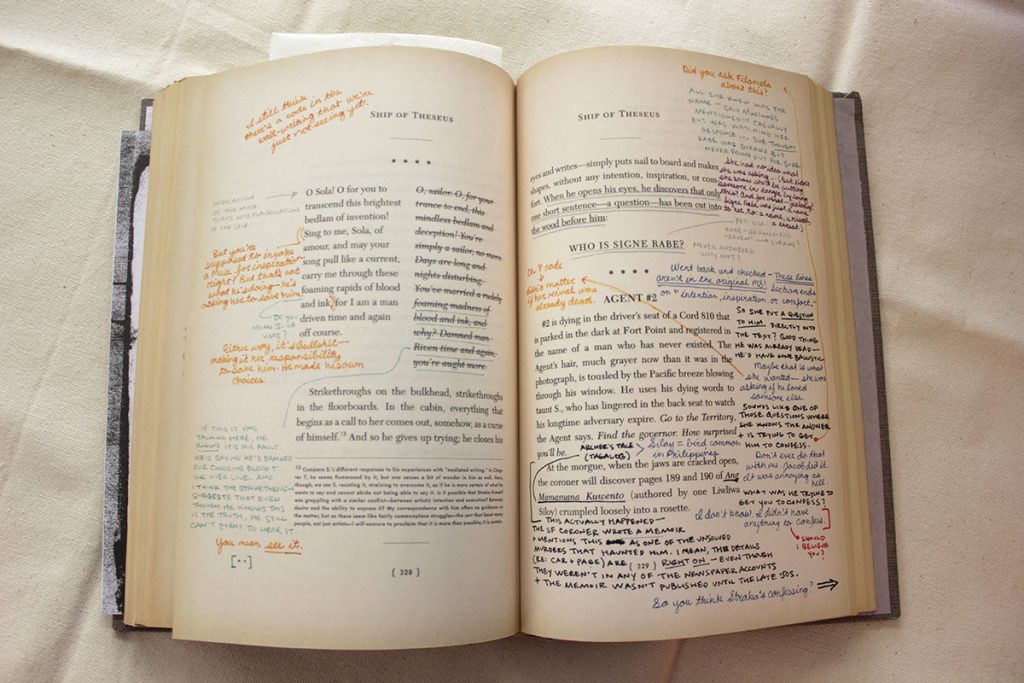 My goal wasn’t to replicate S, or House of Leaves, or anything like that, my goal was to try and understand whether or not a book like this is an illustration, or an actual book. I would think that the best way to write a book like this is to craft it in word, and then to add comments via the review tools. That way, you can see the conversations and the base story simultaneously and work out any kinks that way. Then, when you have the story squared and the writing edited, you can then get to the hard part of illustrating.

But the idea of the Driftwood papers has indelibly left it’s mark. The story of a man who is trapped (by obligation and a sense that he would seem insane(?!) otherwise) in an office whilst the people all around him “surreptitiously” perform lab experiments on him is fascinating to me. Where does that story go? Does he eventually snap and kill his manager? Does he secretly sneak away, only to be fired from a very normal job in a very normal, and explainable work environment? Both? And what would notes of someone who is sure he is a science experiment look like. And better yet, what if the notes were your grandfathers? And there are scientific organizations that have long looked for these notes, and maybe they’ll even kill to get their hands on them… or maybe you are just a product of your grandfather’s own incoherent mind and delusional mind? And a gal that you have started dating has asked to read them, and because you work the night shift and she works the day, you are forced to share ideas and thoughts on the notes via scribbles in the margin. And what if, (just for argument sake) you begin to suspect – this “perfect girlfriend” actually starts to smell a bit fishy, and maybe a bit like the bio firms that are so interested in the notes in the first place?

Yeah, so maybe the Driftwood papers have sort of taken over my brain.