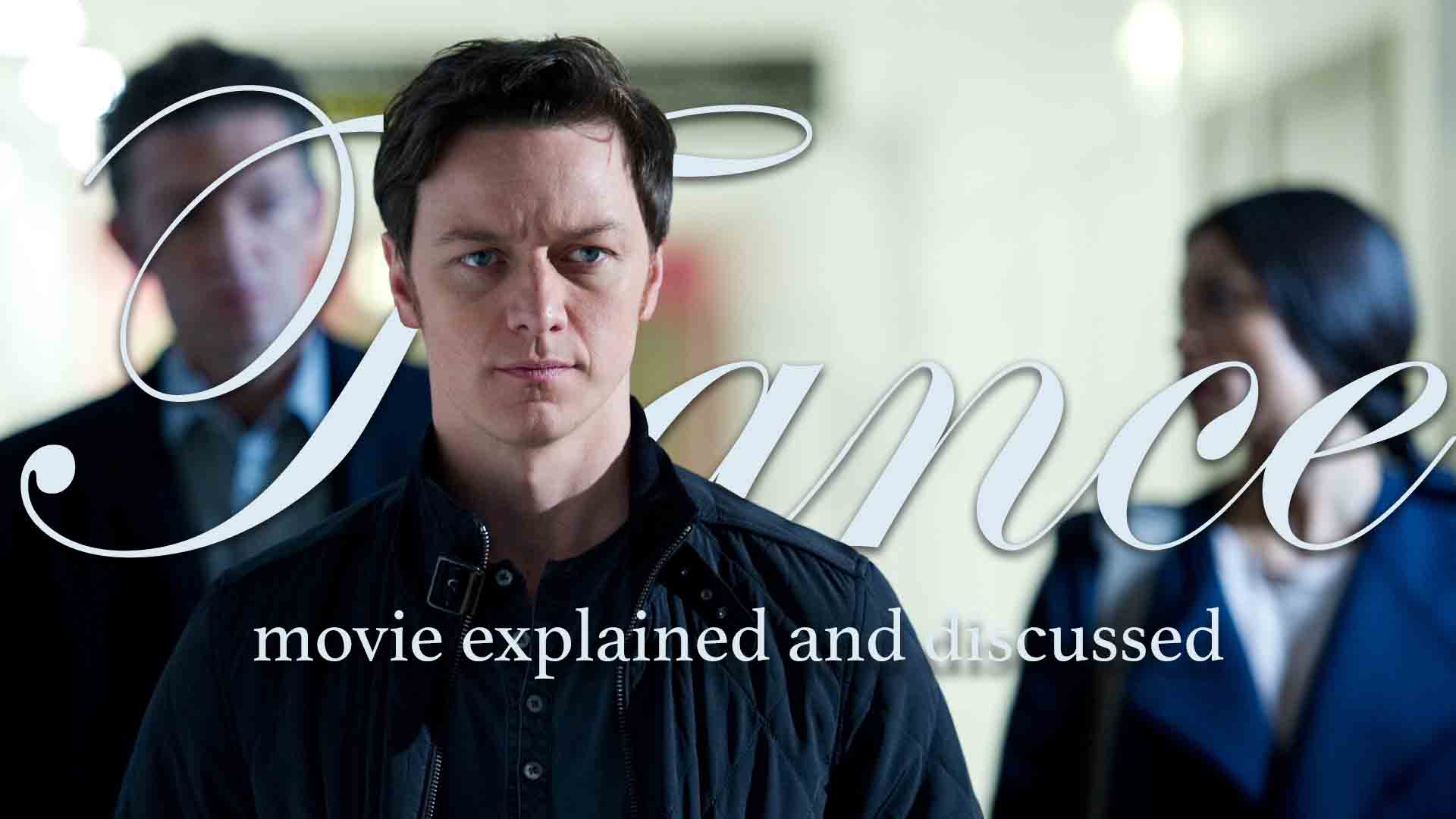 Would You Like Someone To Explain the Movie Trance To You

Would You Like Someone To Explain the Movie Trance To You

Yeah, me too! I would LOVE for someone to wander over and explain this movie to me! hahah. But maybe we can give it a shot together.

A month or two ago I started something new. I added a feature on THiNC. that allows readers to add suggestions for our discussion. Movies that would be interesting for visitors to tease apart and to discuss. (If for some odd reason you haven’t found it yet, it can be found via a little red tab at the bottom of this screen, or you can go here as well.) And you guys have come up with great suggestion after great suggestion. It’s sort of an annoying reminder that crowdsourcing really is an amazing thing.

Well, one of the recent movies that popped to the list was Trance. A 2013 film starring James McAvoy, Rosario Dawson, and Vincent Cassel. And it was so good. And such an obvious fit for THiNC. and I missed it completely, even with my eyes wide open. Shocking really. If we look back to 2013 on this blog we all kinds of interesting movies discussed – documentaries, con artist movies, movies like Upstream Color, Side Effects, Orphan Black, etc etc etc. But alas, or rather, alack, there was zero mention of the movie Trance. So today, boys and girls, we are going to dive into Trance like no one has before. Which means, for those of you who haven’t seen the movie yet, click this link, or this one, or this one… and go see the movie. (No, those are definitely not affiliate links gah! I just want you to see the movie so we can talk about it. Which raises a fantastic point random reader, why am I NOT affiliating those links!? haha.)

But basically, … stop. There is zero basically about the movie Trance. It is a complicated mind-job of a movie. An utter head in the garbage disposal sort of a film…about an art heist gone wrong and the active steps this band of robbers go through in order to get the stolen painting back. Crosses, and double crosses, all 100% occurring…in the mind of the double crosser. Think a more realistic version of Inception, involving hypnosis, double hypnosii(?), triple hypnosiii(?)… and the like. I’d venture to guess that 90% of this movie could be planted or even false memories, depending on the theory you go for. Heck, it could be 100% false for all I know! hahah. Come on! That was synopsis gold. I wish I wasn’t me so I could be pitched by that synopsis and swoon before its greatness. (OK, yes, yes, you are right, that was over the top. I take it back.)

Still don’t trust me 100% yet? Gah. We need to work on that. Here, a trailer for my untrusting friend:

So yeah, from here on out? 100% spoilers. Just go ahead and stack landmines 10 deep, and plant them every foot for the rest of this post. It’d be literally impossible to make it out of this minefield alive. ADAM! I’m looking at you. Close. The. Browser. See. This. Movie.

Alright, now that we have Adam out of here…how should we begin (to spit out all the butt-ends of all my days and ways? Sorry sorry, that was an errant poetry subroutine running there, my bad) to start looking at this movie? A part of me wants to actually start with the theories and work backwards from there. Heck, yeah, let’s blow up the disco and start from there. Which means, this post is going to get long, because in each theory, I’ll walk through the time line from that theory’s perspective. Buckle Up.

As I was thinking about this movie, Simon was the obvious solution that immediately seemed to make the most sense right away. It is Simon’s movie. It is a story about him, his double-cross, and about his swindling the swindlers! So, of course, Simon is our beginning and end!! Let’s walk through that timeline.

Pretty straight forward really. The movie was told out of order, so it was a little confusing. But most of the pieces were there in the movie. It’s about Simon, and his involvement. His attempt to get out of debt, and then his obsessive personality spun out of control. He threatens Elizabeth, she’s afraid, and she forces him to forget through the use of sustained post hypnotic suggestion. Right? But that might not be the right way to look at this movie. 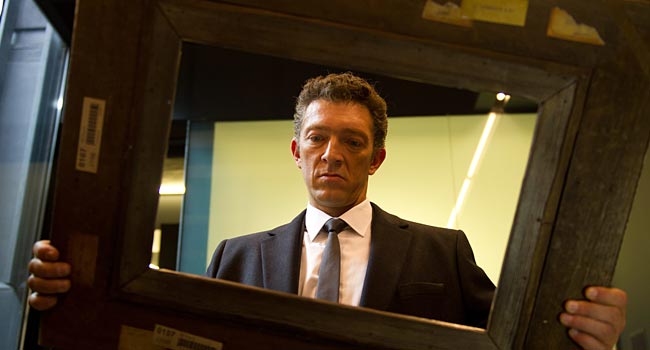 Another title for the Franck version would maybe be, The Mind-FRACK Theory. (See what I did there? I know clever, huh?) Most of the previous theory is here, but with one enormous difference. Simon didn’t exist at all. Simon was just a slice of Franck’s head all along. Similar to the woman and the red car and Elizabeth, there was all kinds of transference occurring. And Simon? He was actually Franck the entire time.

There are more than one sections of the movie when we see this struggle between Franck and Simon internally play out physically. Right? Their struggle for dominance with Elizabeth. And their cat and mouse games with the location of the painting. And that all of this is playing out via hypnotism makes it all the more realistic and plausible.

But the ending actually makes more sense in this theory. Why is Elizabeth hiding from Franck with the painting. Why is she goading him with it? Why does she offer Franck the opportunity to forget as well? Well, it is because Franck and Simon were exactly the same person. And Elizabeth knows that the obsessive qualities of Simon are also there in Franck. That she is still in danger from him, just as she was from Simon. 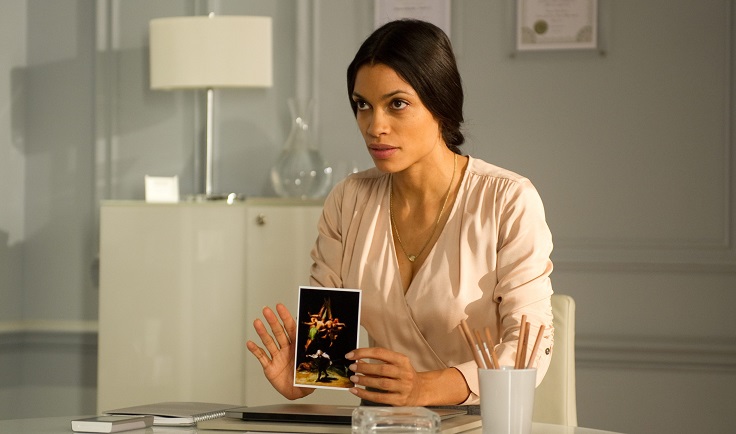 And the piece de resistance? Elizabeth’s theory. Not because it is so revolutionary or mind altering. But because there are two different possibilities in this theory that encapsulate the previous two. So, to explain. Elizabeth’s theory could include theory 1, Simon’s theory… or it could include the Franck theory, theory #2. OK?  (I’ll try* and include theory 1 and 2 simultaneously… but this could get ugly really quickly. I will bold the pieces in this theory that are significantly different and highlight Elizabeth’s primary role.

Anyway, just like that, you have 4 different ways of looking at this movie. And actually, one theory I haven’t even discussed with you, that I like very much, is that Nate could have been the one really in control, and that the Simon/Franck character was actually just a pawn. But I think that goes too far. 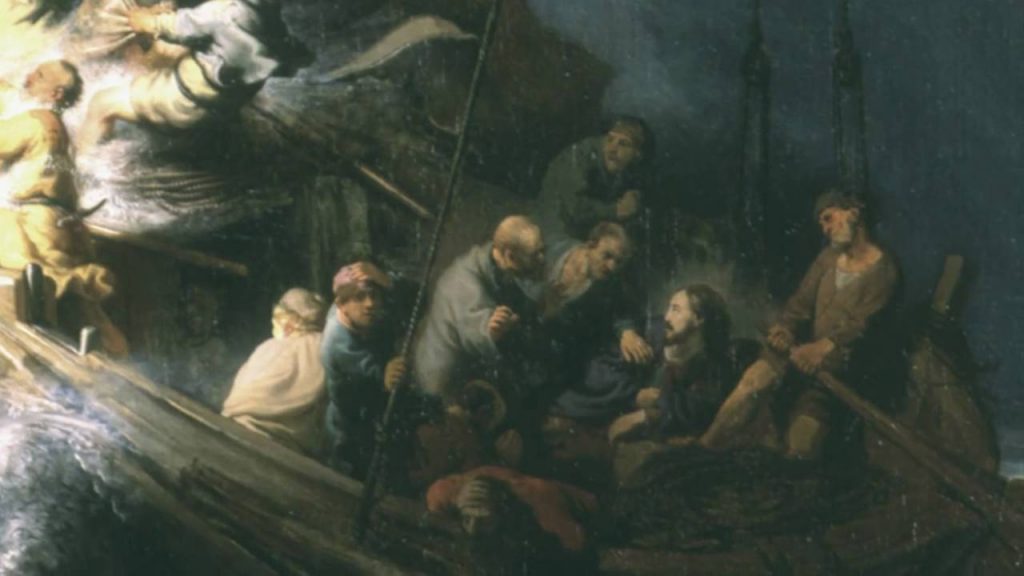 Let’s Discuss the Paintings of Trance

Every single time I get a chance to talk about art while talking about a movie, oh baby, I take it. So pardon this rabbit trail, but I’m super giddy about this aspect of the conversation. And seeing as though this is my hobby site, and not yours, I’ll do as I please – thank you very much.

First. I’m a Rembrandt über fan. The Rijkmuseum is totally one of my favorite haunts on the planet. Just can’t get enough (Yes, Depeche Mode.) And so when Trance kicked everything off by discussing Rembrandt’s Christ in the Storm on the Sea of Galilee, the movie had my attention. (I literally wrote 7 paragraphs just talking about the theological and cinematographic implications of this painting kicking the movie off. Replete with Greek exegetical digressions. But I read back through it, and it was too far afield even for me. You are welcome. So yeah, to start off with a Rembrandt discussion was the epitome of exhilarating.

It was interesting to me that Simon makes the point that Goya was the first to paint pubic hair in an attempt to classify the work in the realm of the real, the biologic, the sexual. Until Francesco Goya’s La Maja Desnuda – (1797), nudes were painted sans pubic hair. And that lofted the subject into the realm of the perfect, demigods, goddesses of sorts. Which became an important tell that something else was going on. That Elizabeth was bare, and that she knew Simon would like that, when we had no previous conversation about this…the entire movie turned on its head at this point. And all because of Goya.

Which brings us to the Goya’s painting, Witches in Air, the painting that was stolen. There was no discussion of why this was the painting that was stolen. But if you look closely at the painting, you see that there is a male? A form, that is near to being devoured, by three witches writhing about this other form. Which, if taken as a sign, should indicate that our Elizabeth Prime Mover theory is probably more on point that we probably realize. That Elizabeth has powers over Simon, (and Franck for that matter) of an almost occult nature. And at the end, she states specifically that she isn’t giving it up because it has personal meaning to her. And most would say that it was because of the sexual thing…but no, that wouldn’t be correct. It would probably be because Witches in Air is a picture of what had just occurred. The trap that she had laid. And the successful ploy she had just unraveled before our eyes.

The Suprasubliminal Aspects of Trance

This movie could be 100% in Simon’s mind. That is just how messed up this movie is. And yet, we are given a pretty good outline for literally what happened. That there was an entire section of movie that happened well before the movie started. And like Rembrandt, in the boat, with the waves coming over the sides, Simon is surrounded on all sides of the movie from the start. He just didn’t know it yet. Which, leaves a lot of this movie open to interpretation. There are nuances here. There are a million curve balls that have been thrown before the movie even started. And that makes this movie truly fascinating.

Simon’s memory isn’t reliable. Franck and Elizabeth aren’t reliable. And yet, Simon is the one that was in control of this situation, and the only one with knowledge as to where the painting is. And yet, he can’t remember. More importantly, Simon’s extreme controlling addiction to Elizabeth, that laid buried like a landmine waiting to explode. So, Elizabeth, desperate to control Simon, forces him to steal a painting. She could care less about the painting itself. But she cares more about the control of Simon himself… Simon who had abused her as he became obsessive in his control. But all of this is laying dormant, beneath the surface until we realize that all of that has been there since the beginning!

I personally think that the truth of the movie is somewhere in the middle of the 3 (4?) theories I threw at you guys. I believe that Elizabeth wasn’t the prime mover ex nihilo. But I do think once included she definitely fought back against the obsession that Simon had for her. And fought back well by doing absolutely whatever she had to in order to get what she wanted to shut the entire scheme down and come out ahead. But I also think there is room there to believe absolutely none of it happened at all. Heck, Simon could have had his head cracked and then the rest of the movie could have happened in his hospital bed. I don’t know, what did you think of it? I really really enjoyed every bit of it. Thanks to whoever recommended I should check it out!!