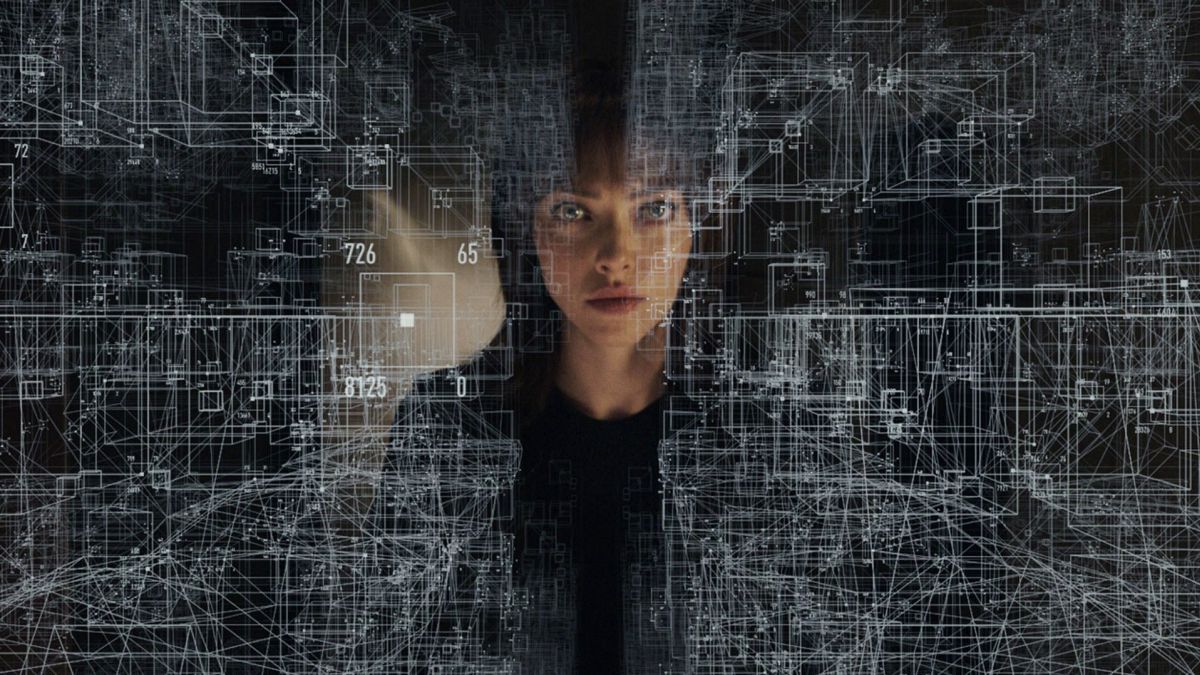 Let Me Explain the Movie Anon from Netflix to You

Taylor Holmes
cinema
May 11, 2018
Let Me Explain the Movie Anon From Netflix to you - or yeah, I understand, I too wondered why I had watched this movie after I was done. But I at least should understand what I watched... IMDB
Action
Acting
Direction
Screenplay
Reader Rating10 Votes
3.2

Let Me Explain the Movie Anon from Netflix to You

I am so betwixt and between on the movie Anon from Netflix. So much of it was blatantly obvious from the get go. And so much more of it was slow and plodding and made me just not care. And yet, the world building! The design! The Black Mirror-esqueness of it all!!! This idea had potential to spare! I mean, it’s a world where everyone wears cortex implants that allows you instantly see meta-data about anything, everything, and everyone in real time. And in world where going off grid is a crime? There are a billion places this thing could go in order to hit an in the park homerun. It was just inevitable.

So no, I am not necessarily recommending this movie to anyone. But since its on Netflix. And since it’ll be on half of your login screens to Netflix in the next few days. We might as well talk about it. Here’s the trailer if you are still undecided (what? my lackluster endorsement didn’t sell you? fair enough.)

So with that, if you haven’t seen the movie yet – flitter away little bird. Shoo. Go. Flip over to your Netflix app, and watch the movie. Then flip back and join me for my walkthrough. And then chime in on the discussion. Because I need some help determining my final thoughts on the film. Normally I’m opinionated enough for 12 people. But like, Backstabbing for Beginners, I’m lost, and unclear what I think about the movie. So yeah – HERE BE DRAGONS… SPoiLerS! AVERT YOUR EYES!

Ok, now that everyone but those that have seen the movie and my buddy Adam (who just keeps reading regardless of how I tell him to stop in person. Dude… seriously uncool. Hey, random internet reader, maybe if you mention him in the comments and tell him he shouldn’t read on he’d listen. Because right now? He’s surely not listening to me.) are gone, why don’t we chat a bit about the movie Anon from Netflix.

The movie kicks off innocently enough with Sal Frieland, (get it? Free-Land? Um, yeah, neither do I.) heading to his job as a detective, some time in the comparably near future. It is a world in which ocular implants called, biosyn implants, allow everyone to see data about everyone and everything around them. The data is issued for absolutely everyone that is registered in the city’s systems. This all knowing and all seeing stream of info is called “God’s Eye” and it means that it shows data for absolutely everyone because it is illegal for anyone to be off grid.  But there, right in front of him? Is a person whose data glitches and shows as an error. huh. But he continues on.

Soon though, it is found out that a string of murders is being committed, and they are being committed by someone that is off grid. Somehow someone is hacking the ether, or the the database wherein law enforcement tracks every bit of data that comes from God’s Eye for every human on the grid. So, how is someone killing others in a society where every single move is constantly tracked?!? Well, it would seem that, the murderer is utilizing the victims own vision against them by playing the murderer’s perspective into the eyes of the victim. So to say this slowly to the duller tools in the tool shed amongst us… If I was killing you, I would send what I see into your eyes. Right? So all you are able to see is my view of you. My view of my gun, and not much else. Which means you can’t see me. You can’t record me or my data. etc. Right?

When The Suspect Cannot Be The Killer

Well, in Sal’s research of the murders he is basically certain that it is the woman that was seen as off Ether towards the beginning of the film. HAS TO BE HER!!! She is a fixer. She seemingly has no identity.  And she use this super power of hers to do jobs for people that don’t want things to be found out inside the Mind’s Eye. Affairs. Mistakes. Etc. etc. But there are certain things that she will not do. So she’s a fixer with a conscience.

Now let’s talk about this for a moment. You can always be certain in really every thriller of all time, the first suspect is NEVER the bad guy. Especially if its a she. And especially especially if its a beautiful she that is acted by the actress Amanda Seyfried. Even if she is wearing a fairly awful wig etc etc. But I am wandering far afield again aren’t I? Right. Sorry about that. Anyway… you can just take it as fact now, upon first seeing her, in other words, immediately, that it wasn’t “The Girl”, as she is listed in the titles. So yeah, I see the girl… and I know she’ll be suspect number 1 immediately. And the next thing I know? It’s not her. She isn’t the bad guy. But was really curious how well Andrew Nicoll, the screenplay author and director, would land the bait and switch at the very last second.

The trickiness about flipping the script in a situation like this is many fold. First, you can’t chase the girl all movie long and then all of a sudden flip to finding out that it was a mail man from some boondock town just passing through that we’ve never seen before. Nope. You have to secretly introduce us to your alternative. You have to secretly give us not only a logical explanation for why it could be them, but you also need to give the audience a readily easy to understand way to uncover the true bad guy without pulling the parachute too late. If you do that people will be too confused. Even worse? If you pull it too early? People will bored out of their minds.

So how does Anon do with this bait switch not the girl play? Not great at all. But we’ll get to that.

The Plays The Thing…

Get it? That was a Hamlet reference. “Wherein we catch the conscience of a King.” Oh never mind. Gah. My skills are severely under appreciated in this gig. Seriously! Hahah. Anyway, so Sal (Rosenberg? Anybody familiar with the Sal Rosenberg Jerky Boys prank calls? OH MY GOSH PEOPLE. I should not be expected to work in these conditions! Here: https://www.youtube.com/watch?v=jF0ajgT_09s – NSFW Language. “YOU NEED AN EXAMINATION!” hahah. “I’ll bring my shoes and my glasses with me so I have them.” Look… this movie is horrible. And I’m bored out of my mind. Something has to keep me enjoying this review, or it will never get done here.) decides to setup a job for the girl to do. An affair. So he sets up a fake life with 30 days of fake data for anyone to evaluate. And The Girl (anyone else uncomfortable about this name other than me?) complies and erases the memory and the details about the affair. But that isn’t quite enough, the Feds, the detectives, are incapable of tracking the girl all the way back to her location.

Now, one of the most difficult things to understand about the tech involved in this movie is something called a proxy. In the real world, a proxy is someone that can speak on someone else’s behalf. In the technical world, a proxy is similar. If you don’t want your identity to be known, you can use a proxy and hide your identity – as long as the proxy isn’t breached of course. A hacker worth his salt will always use a proxy. But in the world of Anon, a really great hacker from the future will use 13 proxies. Or something like that. And the feds weren’t able to work their way all the way back to her actual identity.

So they decide that they need to do it again. And this time… actually, I really don’t even remember what the second thing was. It was something innocuous. Anyway, The Girl deletes that one too, but then The Girl realizes Sal is interested in her, and they make love. So now The Girl, and Sal are a thing. And after the Fixer (the Girl, I like that better) shows Sal her history during the time of a murder, Sal begins to realize that she isn’t the murderer. Soon though, because he reengaged on the case when told not to he is suspended and put under watch. But The Fixer tells Sal that she wants to come visit him, and she sends the police watching his location off on a Officer Down call.

Then, the murderer comes and attempts to kill Sal using his normal MO. But as he does, Sal spins to shoot the murderer, but is shot. And simultaneously, the murderer is shot by The Fixer. And it is then that the murderer realizes it was a ploy to capture him. And through a few inexplicable turns, Sal ends up killing the murder, who was hired to find The Fixer. But he turned out to be the final anonymous proxy that was shielding her from being caught.

But What Is The Algorithm?

One question remains though. How was The Girl able to figure out a way to anonymize herself? Well, stealing a play from the Bit Torrent idea of technology she spread her history throughout the world and gave each person one millisecond of her story. It was such a small amount that you would never notice that you were storing it. You’d never see it. And even if you did, it was such small slice it wouldn’t mean anything anyway.

So wait, what? A bit torrent? A bit torrent is a clever technology that takes a file – say a book – and then slices it into known slices. You hold slice 1, she holds slice 2, I hold slice 3, and so on. And so when someone wants that file, we all ship the pieces independently, to you in a coordinated fashion until you have all the parts. Right? Similarly, The Girl has her history sprinkled around the world, and the only way to reassemble it is via the algorithm. Clever implementation of a fascinating real world technology.

The movie ends with The Fixer and Sal chatting. Sal can’t understand why she would want to hide. And Sal thinks she has something to hide. The Girl makes it clear he thinks that because he spends his life finding criminals. But being anonymous is its own good. Having the right to be unknown in and of itself is its own purpose. Or something like that. And roll credits. Like I said, I’m not a big fan of this movie. But I’m sure there are some out there who are having a hard time understanding the tech, the nuances of this film. And I thought it might be good to discuss it in order to understand it’s goal and intent. But there are a million reasons why this movie wasn’t very good. The least of which it was totally predictable. And fairly slow in its delivery.

But I don’t know… did you guys like it?