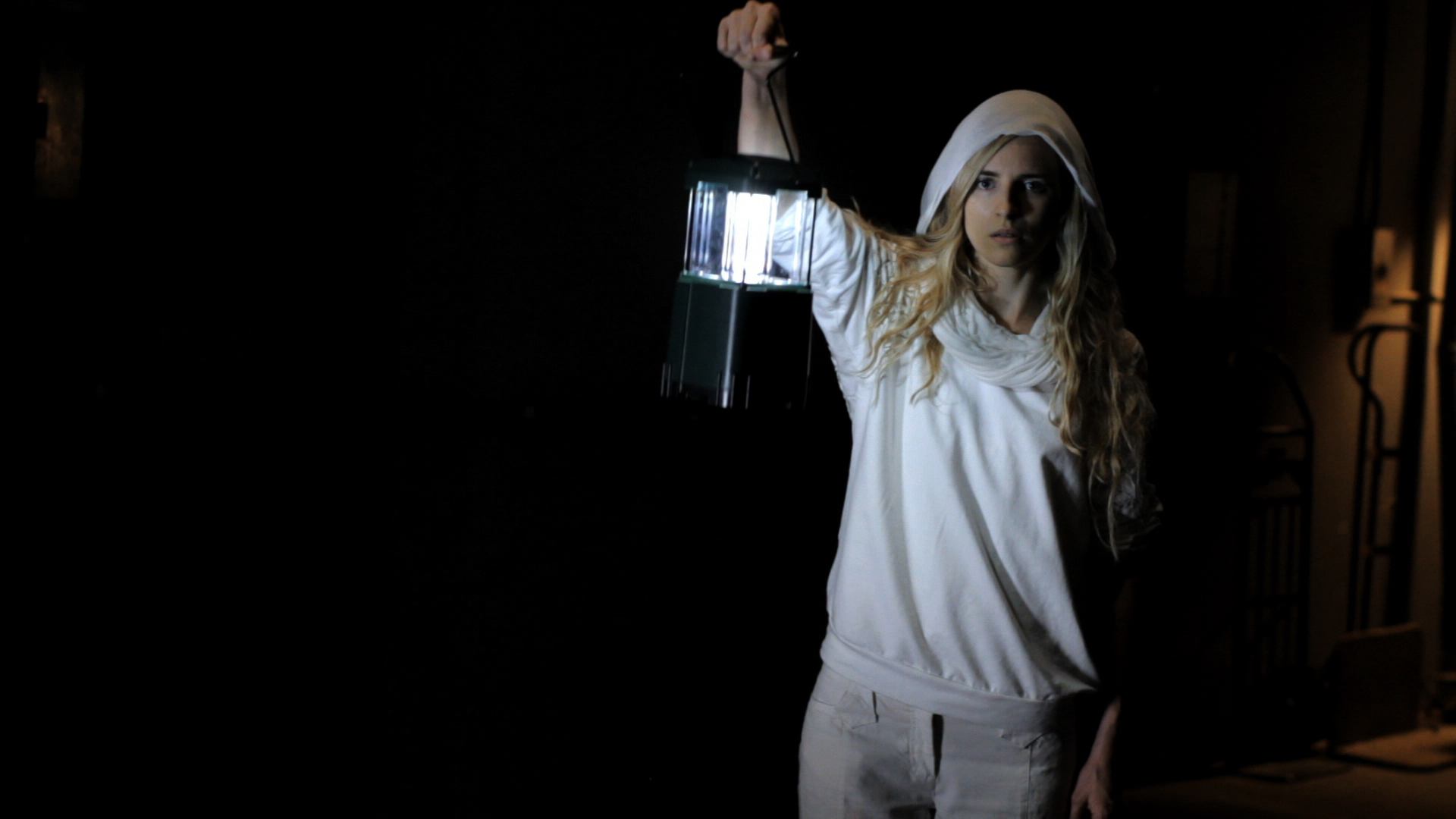 Two Theories to Explain The Sound of My Voice

Stream Sound of My Voice now:

I have recently gone on a Brit Marling bender. I am a huge fan of The OA, each and every episode, amazing. I, Origins was another favorite of mine, as I discussed it in detail previously. And last night I watched her movie, The East, which was a fun watch, but I’ll discuss that another day I’m sure. Brit Marling, as I’ve said before, became a screenplay writer because there weren’t strong female parts, at all, throughout all of Hollywood, for her to play. Which, makes her, and her screenplays, extraordinarily interesting to THiNC., which is constantly looking for trend-bucking movies that create intelligent movies.

But the Sound of My Voice (as most of Brit Marling movies are) is a balancing act of a movie. The balancing act is whether or not a cult leader, may or may not actually be a time traveler. The story is told from the perspective of two individuals that have infiltrated this cult in order to create a documentary about Maggie. And it is a brilliant balancing act with a really well played surprising final act. I unreservedly recommend it. But I do, 100%, recommend just watching this film without any information at all. Just go grab it from right here… or the link to the right, watch it, and then join us back here to talk about it.

But with that, this blog post is diving deep now into the inner workings of the movie. Ok? So if you haven’t seen the film. STOP. RIGHT. THERE. Great. Thanks for that. Now, onward into the movie…

Sound of My Voice Walkthrough

The opening starts in 5th gear. The mood is intense. The music is all kinds of vibrato and bass. But what is going on? Well, Peter and Lorna are joining a cult. They are going through the arduous process as initiates. Homework, memorization, cleansing, etc. And after being blindfolded and shuttled out, they finally get to meet with Maggie. What is so big about Maggie? Well, the big shoe to drop? She is from the future. 2054 to be exact.

Maggie tells the story of waking up face down in a tub of water. She is unclear on how she got there or where she came from. Eventually she is found, and taken in, and together she learns who she is and where she comes from.

Peter and Lorna both have interesting stories of their own. Unbeknownst to Maggie and the cult, Peter and Lorna are there to create a documentary about the cult and are doing their best to record the cult leader and what happens there. But Peter comes from a family in which his mother died when he was 13. And he then went to live with his grandparents. And he may or may not have been abused. And he happens to be the teacher of a student who might be important later. And Lorna? The daughter of Hollywood film producer, she had her first hangover at 13. And her first intervention at 16.

As Lorna and Peter begin delving deeper and deeper into the cult they are starting to wonder if they’ve gotten in too deep for their own good. One of my favorite interactions with Maggie was when she was asked to sing a song from the future… hahaha. And she sings the song Dreams by The Cranberries. Which, was such a brilliant screenplay writing! hahah. “Uh, no offense intended, but that song was written in the 90’s… 1990’s by the Cranberries.” And Maggie says that she didn’t know that, she wasn’t alive in the 90’s. That the song was made popular by the band Benetton. And then like that, that cult member was kicked out… and his wife chooses to stay.

The Creators of The Sound of My Voice

One of the amazing pieces of why this film works is how Brit Marling plays Maggie. She is so low key, and soft spoken, until she isn’t. She is enigmatic and interesting… and actually, I think she’d rock it as a cult leader if ever she decided on a career change. (Not sure if you know this or not, but Marling co-wrote this screenplay with Zal Batmanglij, the director of the film. Marling has been instrumental in a number of amazing roles, The OA (which she co-wrote with Batmanglij while creating the Sound of My Voice), I, Origins and Another Earth (which I haven’t talked about here, but I really should.)

I Digress, Let Us Continue

As I mentioned above, one of the children in Peter’s class is apparently really important to Maggie. She is the girl in the red hat, Abigail Pritchett. And Abigail Pritchett? Yeah, she is Maggie’s mother. Or not. And Maggie has asked Peter to bring Abigail to Maggie. Which, he’s agreed to do, but with that Lorna kicks Peter out. She’s not a fan of this plan.

Simultaneously, we start learning that the Justice Department is investigating Maggie… and they reach out to Lorna as a level head in order to be their eyes and ears inside. And as a result, Lorna goes back to Peter and recommends that they pull Maggie out to meet Abigail – which will be where the Justice Department will intervene.

And while Peter, Abigail and Maggie are together, a fairly strange thing occurs. Maggie holds Abigail’s hand, and then they begin doing that elaborate handshake that the cult members do each time they gather. Apparently, Abigail is where the handshake came from originally. She is Maggie’s mother after all, right? But then the Feds swoop in and carry away Maggie.

Decoding the Algorithm of the Sound of My Voice

Batmanglij – “The film is designed like a calculus proof, very carefully,”

Marling – “I think that we tried to — and I hope this worked — we tried to have everything offer or inspire multiple interpretations. We tried to craft it so that each seed could be interpreted multiple ways and that you’re constantly, as the audience, with Peter, sort of pushed back and forth between whether or not she is or isn’t extraordinary.”

With that in mind… I believe that there are predominately, two ways that you can read this movie. Binary. On. Or off. Sure, there are variations in there. Various forms of grey that each of these interpretations could wear. But generally speaking? For the solution of X in this equation? There are two possible answers.

First theory is that Maggie is completely full of crap. Like, unreservedly, totally and completely, 100% full of crap. We can see this vantage point most clearly from the perspective of the Justice Department agent, Detective Carol Briggs. Remember how she saw Maggie? That she was a dangerous charlatan that was weaponizing her followers for some other darker purpose. That Maggie decidedly did not time travel back to 2012. That it is laughable that Abigail is Maggie’s mother. And that anyone that thinks her BS is legit, deserves to get burnt by her.

Second theory? Simple enough, is that Maggie is a time traveler. Best perspective to view this from would be

That Maggie traveled backwards from 2045 to 2012, and she had some amnesia that eventually, partially faded away. And as a result of her time travel, she had the equivalent of jet lag. She became sick. Weak. And required the members of the cult to donate blood in order to keep her alive. She required non-GMO modified food, and therefore the group began growing her own fruit and food. But this was all as a result of the impacts and trauma of traveling through time.

Now, after watching this movie, you probably have an opinion about X equaling zero, or X equaling one. And that is fair. Brit and Zal had these two specific theories in mind when they created the movie. You and I both will have our opinions about this movie, and whether or not Maggie is legit. But really? The only opinion that really matters? Is Peter’s. Why? Well, because it’s his story. It’s his encounter with Maggie that has occurred and not ours.

So with that said, the best we can really do is to guess as to what Peter’s perspective was at the end of the movie. And like us, he has, really only, two options. ON. Or OFF. Does Peter believe Maggie to have really time traveled and really be the leader of this cult that is preparing her people for the coming hardships ahead? Or is she full of crap? And Peter, definitely had the widest swings of belief throughout the course of the movie. Lorna initially wondered if maybe? MAYBE? She might be from the future day one. But from there on out, she pretty much dropped much in the way of belief. But Peter? He went from thinking she was the biggest huckster, all the way to having his mind blown with what he saw at the end between Abigail and Maggie.

So that, really is the question on the table today. Do you think Peter thought Maggie was legit? He is the one with the most relevant information. He is the one with the data that we really need to make a decision from, one way or another. Which brings us to the quote we hear Maggie telling Peter as the movie wraps to a close:

Which means what, exactly? Your choice to turncoat me and send me to prison? Your choice to 86 my cult and everything I created? No no no. Maybe it was more ethereal, like… I can’t control whether or not you believe. Ultimately, the choice is up to you as to whether or not you take that leap of faith. Something like that? Thoughts? What do you think the ending might mean? Who do you think Maggie was, ultimately? Who do you think Peter thinks she is? But ultimately, Sound of My Voice is a precariously balanced mindjob of a movie that amazingly keeps equally opposite ideas in perfect juxtaposition at all times… definitely fun to watch over and over again to look for the man (woman) behind the magic trick.