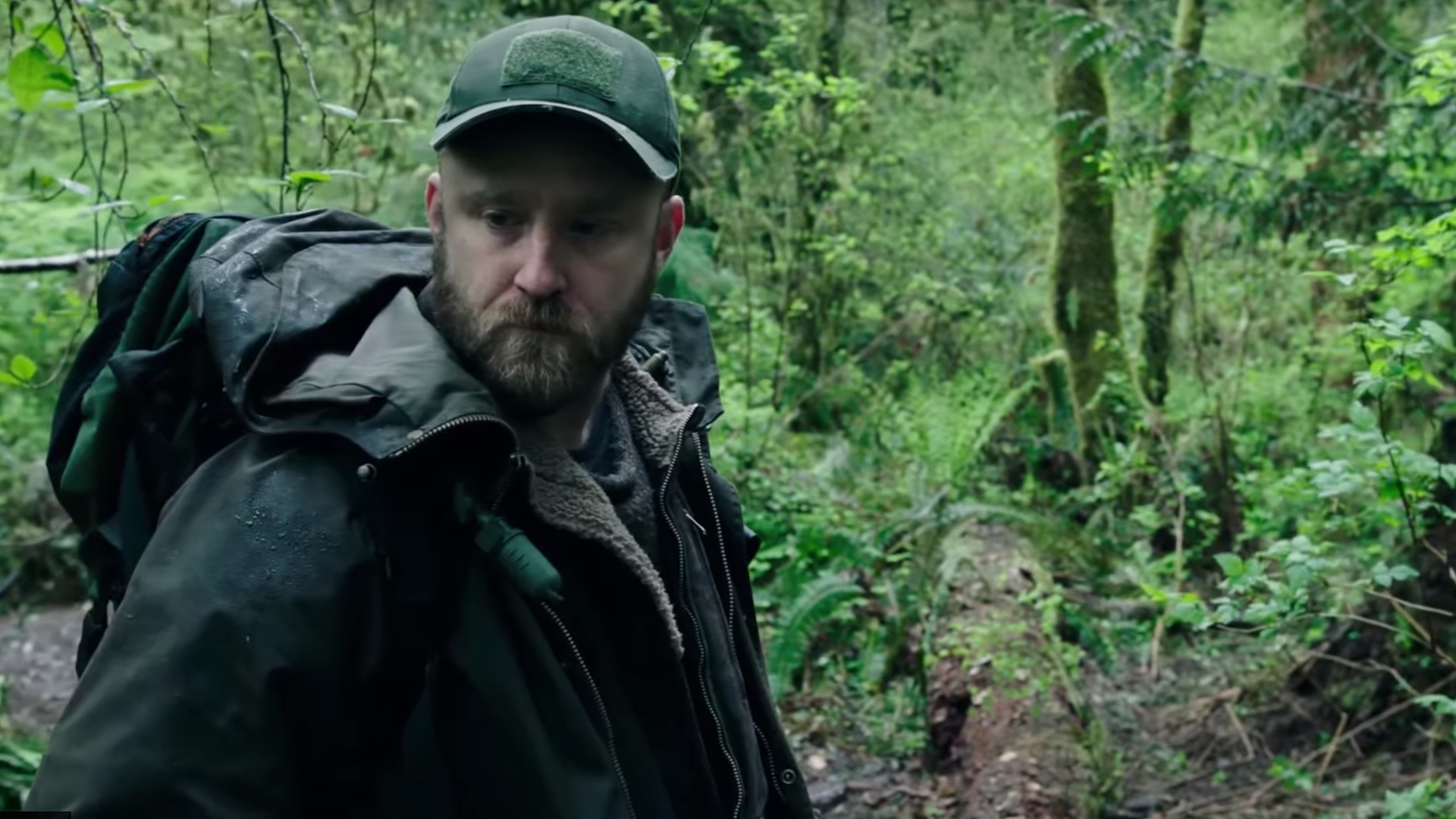 Taylor Holmes
featured
October 18, 2018
Emotional Trainwreck Leave No Trace Movie Explained - or how a movie about a young woman and her father can be heartbreaking and touching at the same time.
Screenplay
Acting
Action
Directing
Reader Rating16 Votes
3.8

Watch Leave No Trace online at one of these prestigious online confectionaries:

There was a death in my family recently. Not of our nuclear family. But a death none the less. And this movie caught me, rather… T-boned me, out of nowhere. I didn’t see this movie coming. That’s one of the things about you all that you probably don’t understand. I take your recommendations very seriously. Here at THiNC. we scour the interwebs for movies that break the mold, do things differently. Usually we scour the low budget, high concept world, dumpster diving in order to discover those hidden bargains everyone else is just blowing right by. Right? And you guys help me find just as many as I discover for you. And I totally dig that about the comments and the suggestion box… just the way we are all looking for fantastic movies that force us to consider-reconsider, our assumptions.

Sometimes I start a movie and I’m like, woah. Not in the mood for that. Maybe I’ll come back to it later. But with Leave No Trace, it was different in that I didn’t really grasp what it was about until well into the second half. Two people hiding in the woods. Ok. Hey, maybe they become snipers and avenge war atrocities. Bank robbers on the lamb? Maybe they extract vengeance upon sex traffickers (I’m looking at you ‘You Were Never Really Here.‘) – I didn’t know! But instead? They ripped out my heart, and stomped on it. So yeah. Awesome. (And the next film on my lists to watch? Take Shelter? Really Mike? Seriously?)

Leave No Trace is one of those emotionally charged slow burns that explodes a powder keg in your lap, if you noticed said powder keg that is. Who knows. But for me? Geeeeeeze man. Did I mentioned I recently had a death in the family and I’m just a little raw about life currently? And I just came back from a 3 day weekend ingesting massive amounts of poetry? That nuked me? Right. As I said, we really only discuss movies that make you think (emotively as well as intellectually) and if that isn’t your thing, then this movie won’t be for you. But I’ll tell you what really isn’t my thing… reading this post if you haven’t seen the movie. If you want to make me really grump, just go ahead and let me know that is your drill.

Heartbreakingly sad story – but really easy to grok. Two people, obviously a father and a daughter, are hiding in the woods. They are making concerted efforts to remain lost. Drills. Regular trail changes. Regular location changes. But why? We are never told outright… but we can infer that Will (played by Ben Foster of Hell or High Water Fame) is having a rough go of it. But he is learning to manage by staying away from people, living in the woods. And at first Tom, Will’s daughter (played by Thomasin McKenzie), loves her time in the woods. She has adapted. She has learned to relish in the underbrush of the evergreens. But when they are suddenly caught and brought into the city, their world’s are turned upside down.

But the movie is mainly about Tom. It’s about her initial investigations and questions of what city life is all about. Will and Tom get good break after good break of kind case workers and kind people giving Will yet another chance. And as Tom meets other children, and investigates what schools, what social situations are all about, she begins to morph, she begins to change. Later, when her father thrashes his leg, and hits his head in a fall, yet again, they head back into civilization. An RV park. And it’s here that Tom realizes she can’t do this woods thing anymore.

Will’s military and psychological experiences are not discussed at all. We know almost nothing about Will. Except that he prefers to live in the forest and that he is highly suspicious of all other humans. We can surmise some form of mental instability as a result of varying or numerous different psychological disorders. I just read that as recent as 2016, over 25% of military personnel most likely have some form of mental health condition. With over 10% of them qualifying for one, maybe two different mental illnesses. We can guess that Will probably has a whole smorgasbord of issues locked up in his grey matter.

Each time Will is stuck within standard society living (whether given a home by a compassionate citizen, or loving RV-park owner) we watch as the thumbscrews are slowly applied and Will begins to twitch relentlessly. Like a current applied beneath the skin that is slowly and steadily climbing until we begin to see the electricity ebbing and flowing across his muscles and temples.

The real tragedy here? I mean, besides Will’s psychological disorders. The real tragedy here is Tom. When Tom is first taken into custody after the two of them are captured out in the woods of Oregon, she is absolutely convinced that the place she needs to be is with her father…… in the woods. But think about how hard that life has GOT to be on the two of them. Temperatures in the forties, high humidity levels. Zero in the way of shelter besides tarps and sleeping bags. They regularly forage for mushrooms and edible plants. They live the definition of a hard life. But where does Tom want to be? In the woods, with her father. Because that is where her father will be, come hell or high water.

And as Tom grows, and realizes, that life in and amongst community, that is not half bad, she starts to yen for something more than what her father can give her there in the woods. She gets engaged with 4H while living in the treehouse farm. She takes part in the singing around the fire at the RV park. She is seeing community as a valuable, and intrinsically important thing to participate in. (I will say this, that the one negative I did have with the making of this film, was just how nostalgic or unwarrantedly optimistic about humans in general. Someone giving them a house in exchange for some help around the Christmas Tree farm? And the two social workers that give Will break after break? Let alone the rent free RV owner towards the end? I just don’t see any of that as realistic. Pardon my pessimism. But that isn’t what this movie is all about… it’s discussing a different particular life lesson.)

The problem though?? Will will never see community as a good thing. He has too many demons chasing him. There are too many things pressing in on him when he’s surrounded by other humans, while living in a home. Notice the two, after being placed in a home, on the Christmas tree farm… “They can never take away our thoughts.” They say to one another. Isn’t that someone says to themselves when being tortured, or imprisoned against their will? And yet, here they are, for the first time, experiencing life in a home together… and they are traumatized as if they are held captive against their will. And I guess, that is exactly what they are thinking. They aren’t free to roam the forests anymore. They aren’t free to live outside the public eye like they had been.

The Ending of Leave No Trace

While Will is mending… it is clear, that Tom is definitely wanting to stay. She’s bargained with the RV owner to rent an RV for a period beyond Will’s injury. She’s considered how to extend their stay. And yet, it’s really obvious that Will can’t and won’t stay tied down to the RV park. And so he tells her they are going. Tom attempts to rebut his decision, but there isn’t any allowed conversation on the topic. It just isn’t happening. He begins to tell her that “We need to…” and Tom pops, and lets her father know that he’s wrong, “You, YOU need… the same thing that is wrong with you, isn’t wrong with me.” And just like that, in one line of dialog, all is made clear.

Regardless, the two of them grab their things and head back into the woods. Tom hangs back, considering all the possibilities of what she will miss if she leaves society again. And she sees her dad, hobbling forward, making yet another poor life choice for the two of them. And so she stops her father. Gives him her necklace. Hugs him. And turns around and heads back.

Up until their leaving, Tom had been talking to the RV park owner. And one of her rituals was to regularly buy food, and hang it from a tree, out in the forest. And regularly, that food would disappear. And the person that had been taking it, they hadn’t shown themselves for years. As Tom decides to head back, we see a picture of two things. First, her future relationship with her father. And her own future there in the camp. More metaphorically than anything else. But still, we know that the distance that has now been created between the two will stay… but Tom will continue to love and cherish her father no matter what.

In an interview with the LA Times, Ben Foster commented about Debra Granik – the writer and director of the film, “She’s the most intense director I’ve ever worked with. Watching her on set is like watching someone trying to save their own life. Everything matters. And not necessarily for where she thinks it should go, but she’s hunting something authentic. That’s a very different way of working.” And that feeling pours out through the rest of the movie. The film vibrates with this search for the authentic. It’s truly amazing. But I gotta say, that ending basically broke my heart. A literal psychic train wreck.