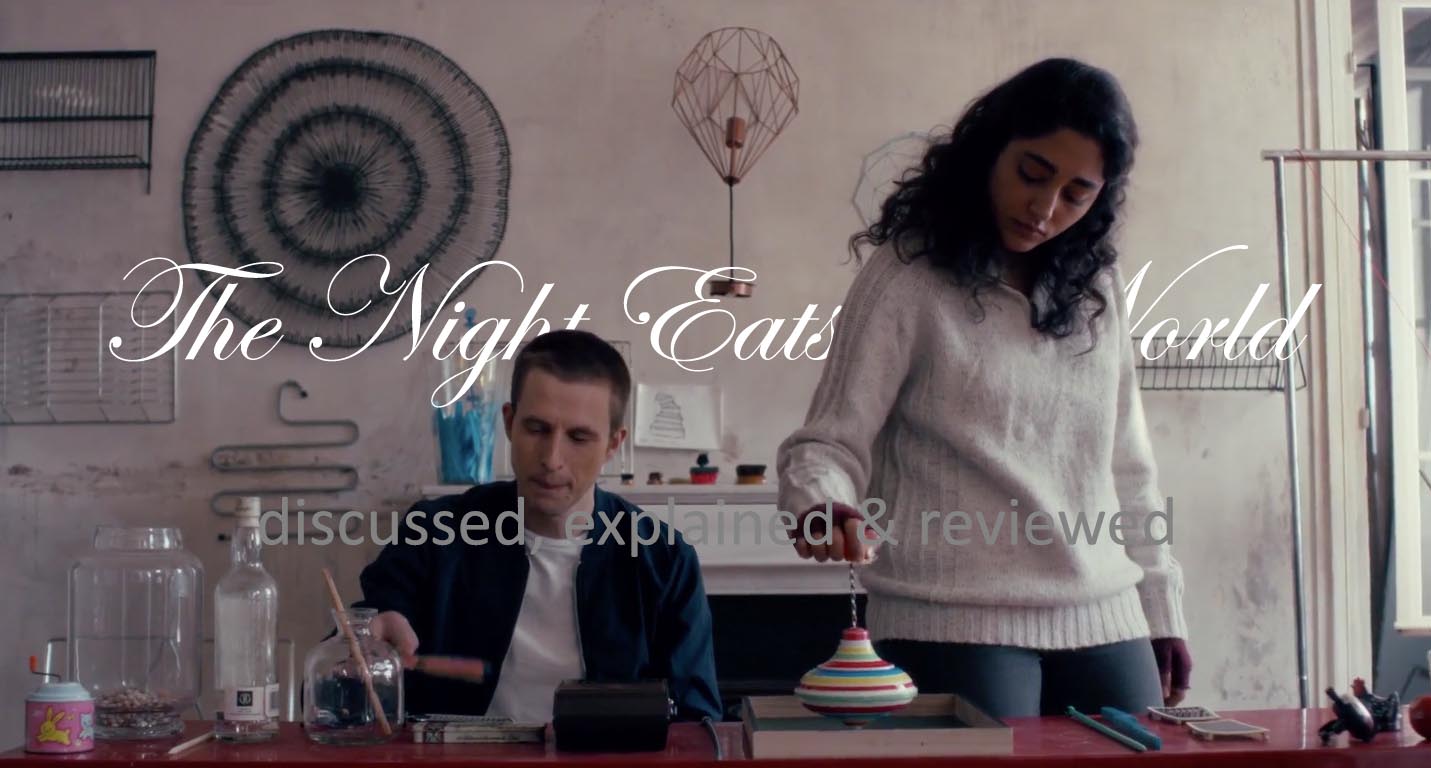 The Night Eats the World Reviewed and Discussed

Taylor Holmes
featured
December 4, 2018
The Night Eats The World is a pensive view of the end of the world. There are clever twists and interesting insights here to be discovered.
Screenplay
Action
Directing
Acting
Reader Rating2 Votes
4.2

Watch Night Eats the World on any one of these fine online streaming confectionaries:

“Hi. My name is Taylor Holmes and I’m a Zombie movie addict.”

Thanks everyone for coming to tonight’s session of Zombie Addicts Anonymous, or ZAATR, wherein we talk about the latest reason to relapse, The Night That Eats the World. You’d think we’d already seen every conceivable take on the zombie apocalypse movie, but The Night That Eats the World will disprove that particular theory handily. Why? Well, thanks for asking class, that’s because this particular movie has a lot more going on under its hood than most other movies. It is a pensive, cleverly plotted, closed box thriller that you didn’t see coming. It comes from a similar school of thought as The Cured.

The premise (heck the entire screenplay) could fit on a single page. Sam, falls asleep at a party in Paris. And he wakes up to the end of the world. Sam has to figure out how to survive the zombies in the apartment building that are all convinced he’d make a nice hors d’oeuvres. You get the idea… despite the setup, it’s a slower take on the zombie apocalypse. And if you aren’t up for a more thoughtful film, this isn’t the movie for you. Have a trailer:

I have to admit, that my first thought pushing me towards watching this film was a guy I had no idea about a week ago. Denis Lavant. The lead actor in the movie Holy Motors. He was phenomenal, and when I saw that this French film had him as one of the three main actors in this little, closed box, film, I had to watch. And I wasn’t disappointed. He is an actor capable of burying even the great Andy Serkis. Definitely going to have to walk through his oeuvre and check out the rest of his films.

Like I said up top, the movie kicks off with Sam heading to his ex’s to pick up some things she took when they separated. But of course, she’s throwing a party and nothing is going right for Sam. And so he waits to chat with his ex, and ends up falling asleep while he waits. When he wakes up, he’s greeted with something like this:

The end of the world hath cometh. And the opening is filled with all the requisite zombie tropes. The deprivations, the zombies in the closet, the survivors committing suicide, etc, etc. But when Sam begins hearing noises throughout the house he feels like he’s going insane. After months of solitary confinement, Sam is just going mad. He’s searched the building over and over again, and has never seen anyone remaining in the building, zombie or otherwise. (Well, minus Alfred the zombie, stuck in the elevator.)

But then one night, he hears sounds of someone walking up to his door. And without looking, he unloads a buck fifty worth of buck shot into the door. After he looks through the door he sees that he’s laid out a woman (of the non-zombie variety) on his landing with his shotgun blast. Immediately regretting his impulsive actions, he begins repairing the woman, and getting her on the mend. Soon enough she’s up and about, introducing herself as Sarah, and investigating this home of Sam’s. Sam learns that Sarah has been remaining on the roofs and keeping to herself as she travels from building complex to building complex, staying above the zombie fray. And quickly, Sam realizes he’s going to have to make a choice about staying alone, or leaving with Sarah.

Sam continues to struggle with the decision, I mean, they have everything they need right there in the apartment building after all. Right? But right when Sam decides he needs to throw caution to the wind, Sarah disappears. Sam goes looking for her, only to find her in bed… dead from the buckshot wound.

I am more than certain this right hook confused more than a few people out there lucky enough to watch this clever little movie. But one second Sarah was alive and well, healed from her wounds, and then she’s dead? How? What’d we all miss?

Remember when Sarah first gets up and starts telling Sam about the other people she has met across the city? They were all single men, living just like Sam, solitarily, and going more than a little crazy talking to themselves. Just like Sam. Right, well, Sam has gone mad, completely bat-shit crazy. Sarah never actually got up off the bed. She died there, and he imagined the rest of it. The singing together, the planning together, the everything. She never survived his shotgun wound.

But his fertile imagination, envisioning what she would have said, tipped him off to the fact that eventually the zombies were going to break through the front door and corner him for good. And sure enough, that is exactly what happens. Thankfully though, Sam had been preparing to leave via rope and hook. And at the last second he leaps off the building and makes it across the street to survive. And as he looks out across the city he realizes he needs to keep moving in order to really survive.

Interesting Insights into the Night Eats the World

The first thing that struck me about the movie is the title. The Night Eats the World? I mean, that is absolutely brilliant. The Night – ie. selfishness, myopicness, evil. Or, evil consumes the world.

I also found it intriguing that Sam was the one person not participating at the party. He was above the fray. Not interested in the mindless revelry. Why? Because he was different than everyone else. He was above the stupidity and the selfishness. He was separate.

Sam’s comments about his mother, and how she probably died, was interesting as well. That he thought at least she didn’t die in an unfair way was intriguing. He stated that cancer was unfair, as are car accidents. Which, I don’t disagree with that, even a millisecond. But to think that getting attacked by a zombie and turned into one yourself? This is the definition of a fair death? Maybe hunting a buffalo on foot is a fair death. Or a humpback whale in a rowboat, with a knife? That’d be a fair death. But getting devoured by a zombie plague? Hrmm. Don’t know if I buy that logic. But I think the larger point that Sam is making here is interesting. It’s like the idea of the noble death maybe? And yet, he then goes on to say that it is a death that befalls everyone. That death is now the new normal.

The pivot that I found most interesting though was how this movie investigated what insanity at the end of the world might look like. And how it would morph into visions of companionship and friendship. Even friendship with the dead. It was a really fantastic sucker punch that I didn’t see coming at all. It was definitely a worthwhile movie with a number of interesting thoughts rumbling around in its oversized brain. I really enjoyed this movie, even if it isn’t going to be for everyone. This is definitely is not any World War Z. But I think it is all the better for it. I don’t know, what did you think of it?