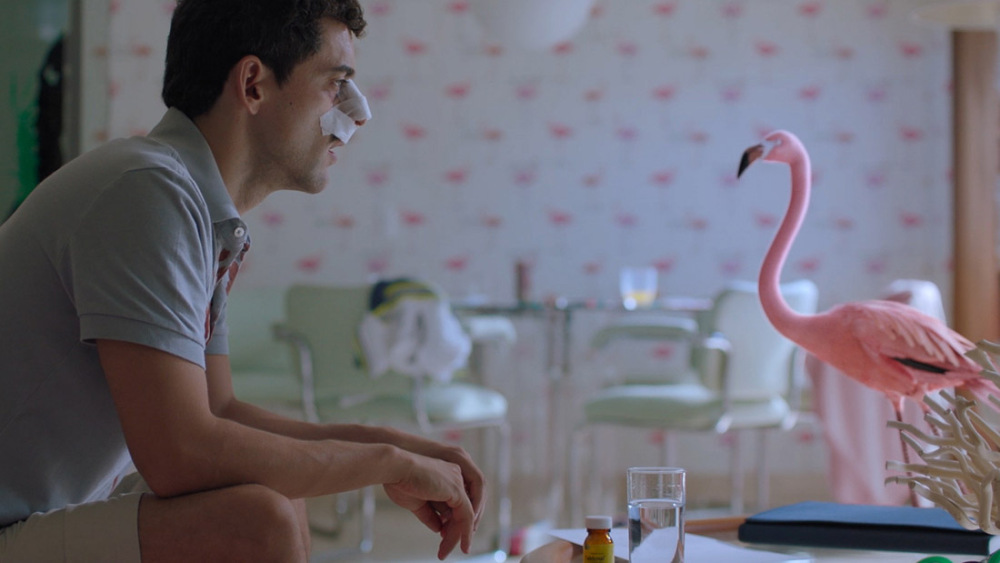 What Did you think of the Netflix Movie Time Share

Taylor Holmes
cinema
December 4, 2018
I literally cannot figure this movie out. I know for a fact I could write the addition of a single 2 minute scene that would take this movie from a C- to an solid A- without much effort at all. But no. And that frustrates me to no end to see a movie this good swing and miss. IMDB
Screenplay
Directing
Action
Editing
Reader Rating3 Votes
2.7

I am nothing if not opinionated. (Shhh, quiet the chorus of laughter. I get it. Gah.) But I literally just turned off Netflix’s new movie Time Share, and I’m still thinking about it. I wasn’t planning on writing about it, but even still, my first thought as it ended was, if I were to rate it, what would I give it? A two out of five? A five out of five? What did I think of the acting?!? Seemed really good at the time. Particularly loved the lead character, Pedro (played by Luis Gerardo Méndez). He was overblown and crazy, just like the script. I also enjoyed RJ Mitte (best known for his role in Breaking Bad) playing evil personified. I thought the script was intriguing and really poignant. I found the entire soup that was Time Share brilliant.

Until, that is, the end.

And now I am sitting here, thinking and thinking. Trying to ascertain the deeper logic and the deeper message buried within by the writers Sebastián Hofmann, and Julio Chavezmontes. Look, we all hate timeshare pitches. Adamantly. Passionately. (Some of us more than others. Oh, do I hate them, and so this movie really resonated for me.) And the inside out view of the time share industry. The demonifying of the sales job they do to actively guilt you into buying.

But I’m getting ahead of myself. Have you heard of this movie by Netflix?

Screw it. Let’s talk about it. I have no idea how I’m going to rate it. But maybe our (as he talks about himself in third person plural) discussion will help solidify what we think of the film. But please know, that the rest of this discussion will be spoiler filled, if lacking 100% in coherence or mental capabilities. This movie has definitely robbed me of my standard targeted aspirations.

Anyway, as the movie opens, we see a man leading a sack race, completely lose it. And he is carted away. Five years later, Pedro and his family arrive at the same vacation getaway for a week of relaxation. Eva, Pedro’s wife (played by Cassandra Ciangherotti) is confused as to how Pedro is able to afford such glorious accommodations. But the truth is – as we all know too well – that Pedro is paying next to nothing for the room, because he has agreed to listen to a sales pitch on the glories that are the Everfields Resort timeshares. Things go off the rails almost immediately when Abel (played by Andrés Almeida) and his large family show up to the same villa. The resort has apparently overbooked the villa and there is no possible reconciliation. Pedro and family will just have to make due.

Meanwhile, we learn that Andres, a housekeeping employee (Miguel Rodarte) – the individual that had the mental breakdown five years prior – has continued slogging his way through the bowels of the Everfield corporation. He is still getting counseling and medication after his melt down. His wife, Gloria (played by Montserrat Marañon) on the other hand has moved on. She has been elevated to a sales associate, which is a pretty critical position in the organization. One that requires her to train to bend the truth of her past experiences to her own advantage in making the sale.

Back at the villa, things go from bad to horrific, when Pedro begins to believe that Andrés is turning his family against him. It doesn’t help that the tennis instructor lays Pedro out with a forehand crush to his nose. When Andres has had enough of Tom – the evil head of sales, intent on stealing away his wife, and ruining as many lives as possible – and decides to give Pedro the file that the corporation has on him and his family. Apparently, the file contains personal health records about Pedro’s wife’s breakdown, as well as photos of them. Seeing this though, Pedro comes spectacularly unglued. And at the sales presentation unhinges totally. He threatens Andres as well as the Evergreen Resort corporation. Tom and Gloria attempt to let them try and become part of their family. But Pedro will have none of it. And then, Pedro and his family pack up to leave.

Wait what? That’s your punch line? Hold on a second there.

A number of years ago, I had the privilege of reading an investigative (man on the street) piece by David Foster Wallace. The long read article was entitled “A Supposedly Fun Thing I Will Never Do Again” (alternately titled – “On the (nearly lethal) Comforts of a Luxury Cruise”). I literally cannot recommend it highly enough. I recommend it so highly, I’ll even link you to it. DFW basically makes the case that human beings are not supposed to live in nearly perfect conditions. His position was that the perfection that are cruises will eventually unhinge you literally. Trust me its a brilliant read. Regardless, a similar thing is going on here, but with a sales angle attached.

The people of the Evergreen Resorts are literally lying day in and day out to make every sale they can possibly. They are tempting only the most persuadable, and impressionable individuals to the roles of sales executives. They are taking the employees life experiences and exploiting them solely for the purpose of obtaining trust with their customers. Trust to be used solely for the purpose of sales. (If you had any idea what corporations know about you before they pitch you, you’d turn green. This stuff isn’t fiction, it’s literally reality. And it actually cracks me up some of you, how you try to stay anonymous online. So cute.)

What’s the Bigger Picture Though

Director Sebastián Hofmann turns the creepy music and the weird lighting up to an eleven. Which, leads you to believe that more is going on at the time share than we are told. Are they harvesting organs? (Literally thought that was where they were going at first when Pedro went to the doctor’s office with a broken nose.) Are they abducting people – stealing souls, ala Get Out? Is it an alien base camp for testing human beings ala The Signal? Or maybe the beginnings of a zombie apocalypse ala The Night Eats the World? Apparently not… at least, not that we are told. But dude, this movie is RIPE for a right hook like that.

Heck, you know what the best addition to this movie would be? Did you see Resolution or The Endless? Two really great movies. The Endless is actually a quasi-sequel to Resolution. Check it out if you get a chance. But, without giving spoilers away for either movie, there was a trap in that movie. If the Evergreen Resort was trying to steal the people coming to visit, lock them away in the villas that they bought? It would have been brilliant.

But there was a lot going on under the surface of Time Share. For example there is a new owner of the Evergreen Resort that took over five years ago. They have got to be up to something underhanded and malevolent. Like building intel dossiers for all the customers coming to stay. Could they also be hiring other families as buddies in order to help close the deals as well? Was that why Pedro was blaming Abel for being the devil? Could it be that Abel and his family paid for Pedro’s doctor visit just to put his family in their debt and oblige them all the more? Also, was Andres intentionally trying to get excommunicated from his wife so that he’d finally be released to leave Evergreen? His smile at the end seems to indicate as much.

And while it’s sort of fun for about 3 minutes to conjecture as to what might be going on, there aren’t enough raw materials to work with here. If we had been allowed to see Andres and Pedro team up to meander deeper into the bowels of the corporation, to see what it is that they are actually up to, I would have to give it a ten. But as it stands, all of that amazing mood, and glorious tension was used for literally nothing. Sure, sling all the hate you want at Time Shares and I will applaud you. But as far as entertainment goes, it sort of seems to be missing an element or two. I don’t know… What did you think of the movie?