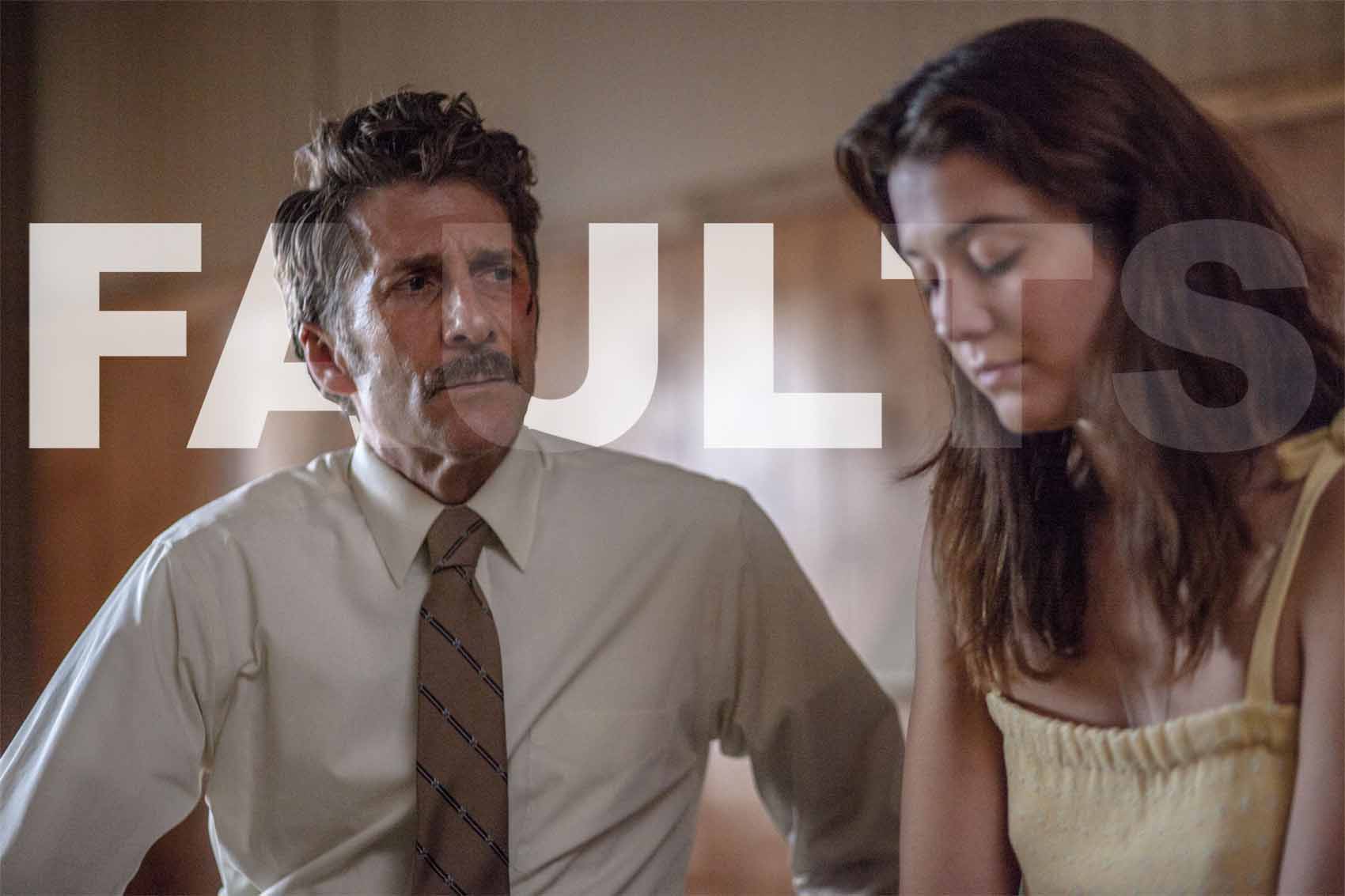 The Movie Faults Will Reprogram You

Taylor Holmes
cinema
January 27, 2019
Faults is a clever movie involving the forced family intervention of a cult member that absolutely does not go to plan... like at all. Not even a little bit. IMDB
Screenplay
Acting
Directing
Mindjobness
Reader Rating1 Vote
4.3

You guys are getting pretty good at this movie recommendation game. You see that red tab at the bottom of this screen? On that screen, you are able to post a film for us to talk about together. Feel free to post whatever you like – only glitch is that I’m completely overrun with movies to watch. I am so horribly behind! But recommend away. You can also up vote recommendations that others have made. Trust me, I watch these upvotes closely.

Well, Faults is another film brought our way by you guys, and boy, is it worth a watch. The acting was tight, and really well played. The topic is brilliant, gloriously plotted. And most importantly, it comes with a right hook of a switch up that I didn’t see coming at first. Alright, enough of that – let’s break this movie down and start talking about it. Please watch this trailer if you haven’t seen the movie, and then be on your way. If you’d like to watch it now – Amazon Prime is the cheapest, fastest way to imbibe.

Ansel (played by Leland Orser – made famous for his disturbing part in Se7en and his crazy role in Alien (random trivia, did you know he was married to Roma Downey for a bit?!? I literally just had my mind blown with this particular factoid)) is a real loser that has given up rights to his best selling book on cults and interventions during a hostile divorce with his wife. His second book is basically seen as useless. Worse, he’s completely clueless as to how to pay back his unscrupulous money lender, Mr. Terry. Apparently his technique, for breaking individuals out of cults, includes abduction and 5 days of intense psychological reprogramming. He happened to hit a niche with his first book, and he also ended up getting people killed who he was attempting to “help.” I think the key here about our “hero” Ansel, is that Ansel is a reprobate and a fraud.

When Ansel realizes his past debts are coming due, and he will have to pay up or probably be killed, he talks with the parents of a woman – Claire (played by Mary Elizabeth Winstead of 10 Cloverfield Lane) who has been lost to a cult. But the showdown that is about to happen between Claire and Ansel is probably a little bit more than Ansel bargained for.

The Reprogramming Showdown of Faults

Claire, arriving in the hotel room, is mostly cooperative. Which, I found particularly surprising, seeing as though she could have screamed bloody murder and alerted someone, anyone, passing near by.

Which should have told me a lot.

But alas, it did not. And so Claire and Ansel start their squaring off – and it begins with sleep deprivation. And when Ansel wakes in the morning and Claire is still there, sitting on the bed, even after the guard dozed occasionally, I KNEW for a fact that something was up. My notes from my watching said this, “Wait just a minute. She sat there all night, even when she could have left? This is an inside out play. She’s here to do something to him. Guaranteed.” Yeah, I’m not the sharpest tool in the tool shed sometimes.

We then get an interlude with the parents, which seemed like stagecraft and weirdness at this point. But ultimately Claire tells her father that she is afraid of him. And when there is a knock on the door, it’s Mr. Terry come to collect half the money that they owed Ansel. And it’s this interlude that introduces the number one external threat to the internal story.

Ultimately though, this story is a minuet. A lighthearted dance between Ansel and Claire, a dance with enormous consequences. Because when Ansel returns to the hotel, after delivering the cash, he finds everything upside down. The parents soon leave in huff, and he learns that Claire believes she can dematerialize, that she can walk through doors and reappear on the other side. And, after Claire makes out with Ansel, it becomes more and more clear that the power dynamic of this “intervention” is not going to Ansel’s playbook. But if he can only make it to day five, he’ll be able to get the rest of his money and pay off his debts.

Later that night, he wakes to see a video of the woman he was attempting to help years ago, but ended up getting killed. Apparently, there were 38 others who had committed suicide, and Ansel had attempted to save this one woman. But she was used by Ansel to run the interview circuit, and after which, she headed back to the cult and committed suicide to join the rest of the cult.

Claire then stages her own intense intervention on Ansel’s behalf after they had “accidentally” both been locked in the bathroom. It begins with, “Listen to my words.” And continues with the aptitude and dexterity of someone who has been extracting individuals from the bonds of cults for years and years:

“Are you to blame for Jennifer’s death?”

“I could have helped her and I chose not to.”

“I lost every kind of respect.”

“Do you owe Terry money?

“He gave me help when I needed it most.”

“He took advantage of you – the only person you owe is yourself. Does what I say make sense to you?”

“More than anything else I’ve ever heard. I feel free, clear.”

“Look at yourself from the outside.”

“I want to see you walking through the door as if it isn’t there.”

Voila, in a 15 minute session with Ansel, Claire has reprogrammed her reprogrammer. The rest of the movie is resolution. Including Ansel’s murder of Terry with his book inscribed to Claire at the beginning of the movie.

An Inside Out Look At Faults

Can I just pause a moment and say that I have not really had Mary Elizabeth Winstead on my radar before today. I knew she was in Swiss Army Man, which, everyone raves about – but I haven’t seen yet. And she was good in 10 Cloverfield. And I had heard she was in the TV show Fargo, but I haven’t watched. But she just owned this roll and this movie.

I’m gonna go out on a limb and say that this movie probably can be understood most through its title. Faults. We are given a few explanations within the movie as to what the title is about, and at the end, we are given the best insight as to its meaning, “A fault is a fracture, a place where pressure builds. One day I will be a mountain, but today I am a fault.” And if we look at this in an abstract way, we can infer that the movie is saying that each of our internal failures, our faults, are our places of most intense pressure. And it is at these locations, where the intensity of experience will go from deficit to advantage.

The movie Faults has an interesting metaphor here. Claire is offering Ansel a perspective of freedom from. Does that make sense? She’s explaining the chains that he has wrapped around himself. The chains of debt, of guilt, of insecurity. And that is just an amazing thought! Debt free living?!? Really? And Ansel buys into this freedom that Claire is offering, hook, line, and sinker. Which is really intriguing to me. To be free of all the psychological debt that one carries is something I’d be all in for. But wait, freedom from is one thing, you always need to evaluate the freedom to in which you are heading. And the freedom Ansel is finding himself heading into is a place of subjection to Claire and this vision of ascendancy she envisions for herself and her family. Freedom to murder and upheaval.

But she has got to be real! She performed miracles!! Well, about those miracles. Let’s chat about them a bit. The first “miracle” we see is that she is out in the balcony asleep. She tells of walking through locked doors and re-materializing there. But, yeah. Or she could have just slipped out of the hotel room. But the lock on the bathroom door!! Are you seriously going to change the pattern and path of your life based on a single door lock? And with that lock unlocking, Ansel has bought in on the path Claire is offering. He is so desperately lost that the flimsy sleight of hand easily undermines Ansel’s grasp of reality. And the next thing he knows, he is bludgeoning to death a man with a book.

But the interesting aspect of this movie is that when it sets up, it tells us that Claire is desperately lost and in need of saving. But as we learn, it’s actually Ansel who is so desperately lost. So lost in fact that he would quickly and easily grasp this “freedom” that she is offering. The hook to this movie is it’s inside out nature. The brilliance of it is that the lost are the ones with surety, and the found are the ones without a hope or clue.

Who is this Claire in Faults?

So, yeah, it’s an inside out movie. But the biggest question I have about this movie is a very, very, specific one. Who is this Claire? Like, what is her relationship to Ansel? Why Ansel?

Think about it, Claire specifically targeted Ansel, through her parents, in order to get him to abduct her and to manage Claire’s “intervention.” Which really was Ansel’s intervention. Bottom line, Ansel has been incepted. But why? Could it be that Claire was a survivor of this Universal Concurrence cult? A child? A baby? And she was adopted into this family? And then as she learned of Ansel’s part he played in the death of her family, she came to exact revenge? I seriously need to find the screenplay author, if only to ask him this one question.

There was another similar movie that turned itself inside out like this one – that you might find intriguing if this floated your boat. It’s called 10×10. That too seemed to be one thing and turned out to be something entirely different. Or maybe similar to The Sound of My Voice? Anyway, right hook movies, in my humble opinion, are the single best way to architect a film. And the surprise in this film was clever enough. I enjoyed it anyway. You? What did you think of it?